9th September 2012. This coin lark is quite fascinating! We returned to the latest local Coin, Banknote & Antiquities Fair this morning. They’re held on the second Sunday of each month at the National Motorcycle Museum, near the NEC, south west of Birmingham. After duly investigating our purchases of cheap (albeit battered) coins of Emperor Napoleon III last month, it was discovered that his 5 and 10 centime coins occurred in a pleasingly varied array of years and of mints. It was fun making a table of what as minted where, and when, then ticking off the ones we had. So we were drawn back to look for some of the many unticked boxes in our table. In addition, it was decided to obtain a few coins of King Victor Emanuel II. We already vaguely knew that that his career was ‘intertwined’ with that of Napoleon III. Besides, when sorting through very badly worn coins indeed, their 10 centime/centesimo pieces were confusingly alike – the same size, for a start, plus a left-facing bearded portrait… We obtained three 5c and thirteen 10c coins of Victor Emanuel II, all from the ‘rummage boxes’ of coins priced at between 20p (or 5 for £1) and 50p apiece. Above is a 5c piece, which has the best condition portrait of him. The ‘N’ at the foot of the reverse tells us that it was minted at Naples. In addition, 1861 is a highly significant date – it represents the year in which the Kingdom of Italy came into being. (See Wikipedia, http://en.wikipedia.org/wiki/Italian_unification .) Born in 1820, Victor Emanuel became King of Sardinia after his father Charles Albert abdicated in 1849. You can read of the alliance (not without its ups and downs) that grew between Napoleon III and Victor Emanuel II. Its essential purpose was to deprive Austria of territory, and share it out between France and Piedmont-Sardinia. The upshot was, that on 17th March 1861, The Kingdom of Italy came into existence, and had extended itself to the whole peninsula by 1871. (An actual historian reading this will be aghast at having the Unification of Italy compressed into three lines, and quite rightly so! Please do check out the Wikipedia link!) 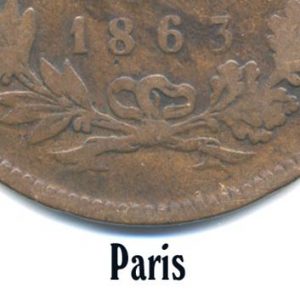 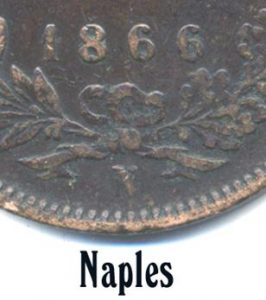 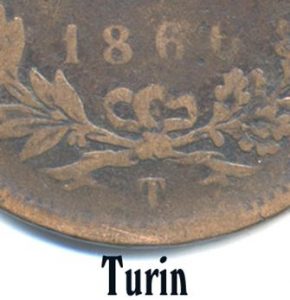 Paris is distinguished by having no letter, while Milan, Naples & Turin have the obvious one. They were also minted in Strasbourg (then part of France), those bearing the letters OM. (Coins of Napoleon III minted at Strasbourg bore ‘BB’, one partly superimposed on the other.) Of most interest to me, however, was to discover that in 1866 & 1867 some were made in my home city of Birmingham, England. Those bear the letter ‘H’, clearly denoting the Heaton (or Birmingham) Mint, which had a long & distinguished history from 1850, but in more recent years gradually declined: check it out at http://en.wikipedia.org/wiki/Birmingham_Mint . I shall certainly be looking out for one of those at the next coin fair! I dare say that this close connection between Napoleon III and Victor Emanuel II led to the great similarity between their lower denomination coinage? Oh, it’s heady stuff, and we haven’t even got to King Umberto I yet; let alone King Alfonso XII of Spain. We accidentally bought one of his 10 centimos coins, which is yet again the same size: 30mm! What does it all mean? 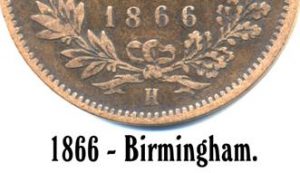 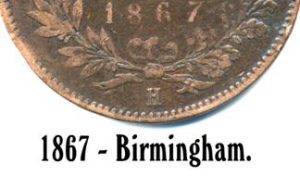 On our next trip to the coin fair, we found one of each Birmingham-minted 10 centesemi in the rummage boxes.