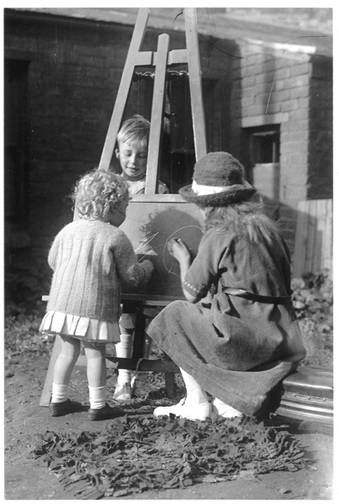 On 9th February 2008, I was sorting out boxes and envelopes of photographs. Apparently, now that most photographs are of the digital variety, and as the vast majority are never printed out but just kept on a hard drive, it is feared that eventually, most of these will be lost. On the basis that even the best-intentioned of us don’t back up our hard drives as often as we should, eventually that hard drive may wear out & stop working; then, the photos. (never mind all the other info.) can only be recovered by some moderately tedious and expensive process. The vast majority of photos. taken are surely of family subjects, and so to the world at large are ephemeral. But how valuable they are to our descendants! We really should make every effort to save them. And please make a habit of writing on the back, who the subjects are, and when and where it was taken. OK, this is a counsel of perfection! You might even avoid writing on the back with a ball-point as it might go through to the front. I suppose you could write the dope on small peel-off adhesive labels & stick them on the back. But again, the adhesive might come through, or the label might eventually drop off; perhaps even both… Or, you could lightly number them on the back, and enter their description in a notebook. No, no: the book would be lost, wouldn’t it? Worse still, the ‘nightmare scenario’: the photographs might be lost, and the book survive. Imagine the frustration of your descendants, when your future family archivist looks through a detailed list of all the ancestors present on fascinating photographs, but which photos., alas, no longer exist… >8^(

When our grandfather died in 1979, my brother managed to save one box of his glass quarter-plate negatives from the several boxes that still existed then. Photography and fishing had been his two hobbies. The above (to me) delightful shot of my mother, was recently recovered by my brother from one of those glass plates. Neither of us had seen a print of it before. Our mother was born in 1919 – she’s the little curly-headed girl. How old is she in this photo? 3 or 4 years old? So it was taken around 1922 or 1923. This sort of photo. is the fundamental stuff of recent family history. How close it came to being lost! She died in 1948, aged only 29, of tuberculosis. So of course I have very few memories of her; my younger brother has less still. Hence the value of photos. like these. Note, by the way, ‘the prop.’ mat. Evidently, any properly composed photo. at that time should contain ‘a prop.’ – that is something else contrasting to the scene, ‘setting it off’. In another plate, an aspidistra plant has been brought out of the house into the back-yard. In the foreground of the photo. above may be seen a traditional small mat of ‘ragwork’. I remember my grandmother making a much larger one in the early 1950s. Note also the easy, ‘relaxed’ quality of the relatively large quarter-plate negative, as opposed to the ‘pinched’ effect of the smaller roll-film formats that had practically taken over by then for amateur use.

However, this short web-page is nothing to do with my family history (a sigh of relief was heard), but about three ‘stereoscopic views’ which came to light during the sorting of photos. I had forgotten I had them. The period of the mass vogue for stereoscopic photography can easily be found on the web. Pray allow me do so…

“Stereoscopic views were produced by the millions between the 1850s and the 1930s. Their popularity soared when Queen Victoria and Prince Albert were presented with a stereoscopic viewer at the Crystal Palace exhibition in 1851.” the most excellent New York Public Library website tells us. I’m sure they won’t mind me quoting them, especially as I intend to do so again, as follows: “By the 1890s, humor and sentimentality came to dominate the genre market and Underwood & Underwood and Keystone documentary views became ubiquitous, covering landscape, travel, and the growth of cities.” That quote is extremely apposite, because the three views you will see below are from that exact period, and conform very closely to that NYPL comment. 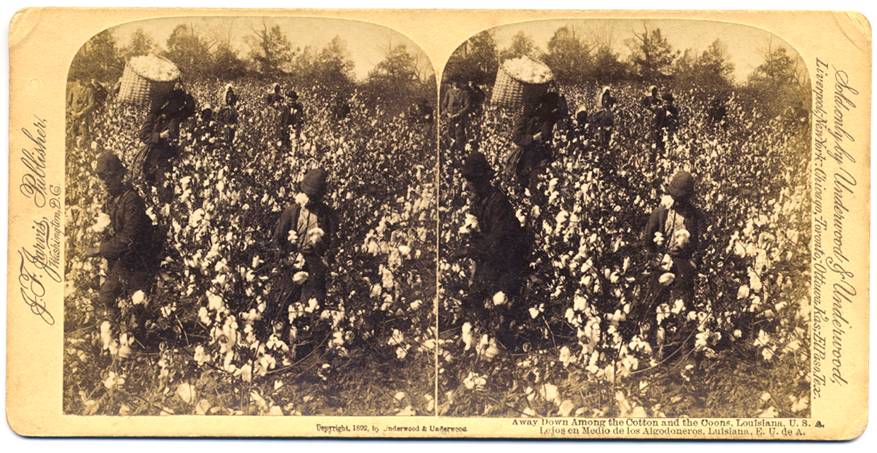 This is indeed an Underwood & Underwood card, from 1892 & titled “Away Down Among the Cotton and the Coons, Louisiana, U.S.A.’ Yes, yes: I know that the title is Politically Incorrect today, but I can’t very well help what people called photographs 125 years ago, can I? 8^)   It’s a very confused photograph with all the people and the cotton bolls & so on, but it looked good in 3-D. By the way, I have stepped up the contrast on these cards to make the image (and the printing) easier to read. At the right, the credit is rather interesting. It reads: “Sold only by Underwood & Underwood, Liverpool – New York – Chicago – Toronto – Ottawa Kas, El Paso Tex.” I presume Liverpool is the one in England; New York & Chicago are obviously the U.S.A., while Toronto is equally obviously in Canada. But it is followed by Ottawa, which is the Capital of Canada – only it cannot be that Ottawa, but the one in Kansas, U.S.A! I notice that the card does not seem to have a catalogue number… The backs of these three cards are blank. Presumably collectors of these cards have long since rebuilt the catalogues of the companies that issued them, just as discographers have listed tens if not hundreds of thousands of early cylinder and disc sound recordings. 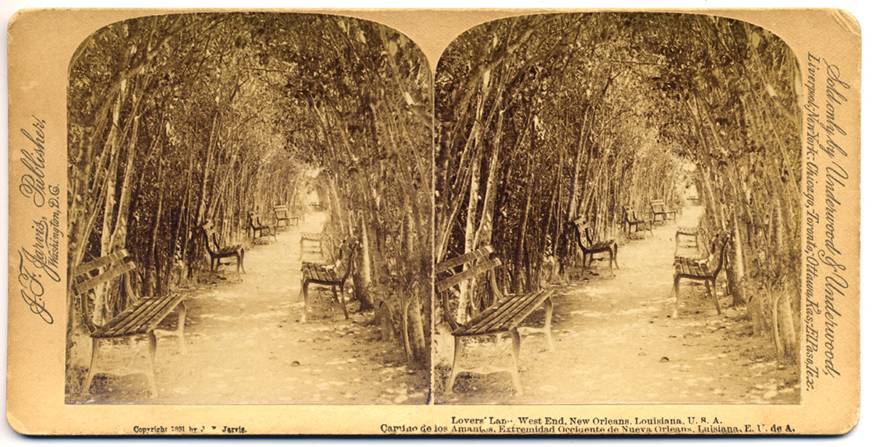 This card is from 1891. “Lovers’ Lane – West End, New Orleans, Louisiana, U.S.A.” This must be a well-nigh perfect subject for a 3-D shot? In effect, a ‘tunnel’ that curves away to the right. It looked really great through the stereoscopic viewer. Charlie Creath’s band recorded a tune called ‘Way Down In Lovers’ Lane’ for OKeh in St. Louis ca.3rd November 1925. He was based there, so maybe there was a ‘Lovers’ Lane’ somewhere in or around St. Louis, Mo? Or maybe even, as his band played on the riverboats that plied the Mississippi as far down as New Orleans, the tune may just possibly relate to this ‘Lovers’ Lane’? Just wishful thinking really… 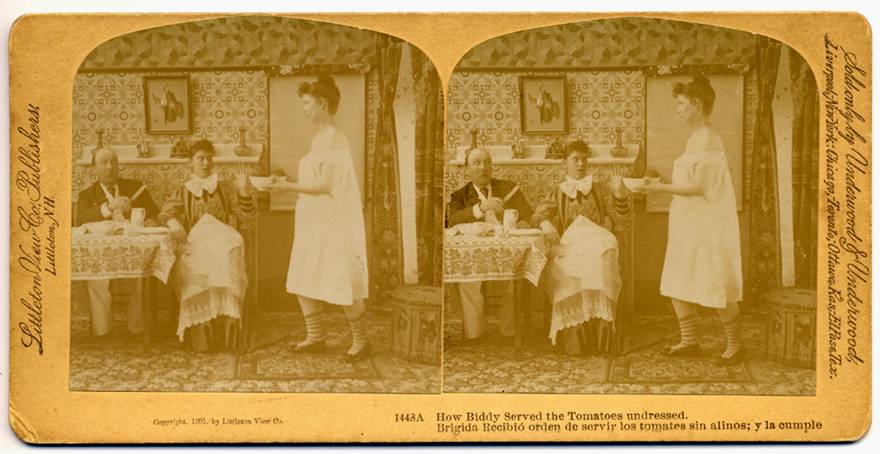 This last one is completely different, and must, I think, be regarded as definitely rather naughty! It dates from 1891 and is entitled “How Biddy Served the Tomatoes undressed.” Well, she’s still wearing her ‘shift’ – is that what it’s called? But the aghast expressions on the faces of her bourgeois employers, leaves nothing to doubt! She is definitely ‘undressed’.

If you care to investigate these ‘stereoscopic views’ any more, there are any number of examples on the web, and of course they are always for sale on eBay. Actually, in my very early days of looking at eBay, there was a huge set of them, oh: forty or fifty or even more, taken ~1905 during the Russo-Japanese War. They were taken from the Japanese side, presumably by American photographers for the U.S.A market. I’m very interested in that period of history, the decline & fall of Imperial Russia, but I was totally ‘skint’ at the time, so couldn’t bid on them. Who knows: perhaps another set will come up?

To close this page, how did I come to have these 3 cards? Well, I bought a viewer and a large number of cards in the mid-1970s, when I used to buy & sell old things, sometimes even at a profit! I kept these three because they seemed to be more interesting than all the others. They got stuck into a folder or box & ‘went to ground’ for the best part of 30 years & only surfaced a couple of weeks ago.