Charles McCallon Alexander.
1867 – 1920.
Noted Evangelist, Singer and Composer. On this page,
you may hear seven of the nine recordings he made in
London in 1905, during the Torrey-Alexander Mission. 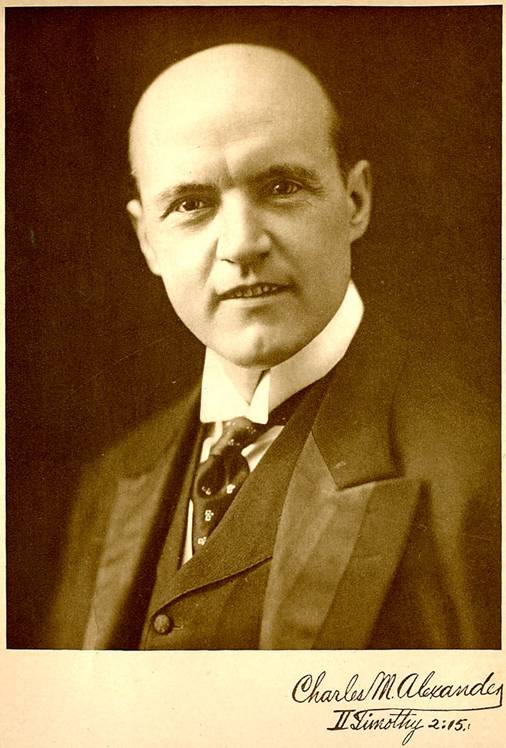 In 1971, we acquired an early, double-sided yellow-label HMV record. It was among others in a rather curious antique shop that temporarily appeared right in the centre of Birmingham.

We were primarily interested in Jazz and Dance Band records at the time; but also, ‘old and unusual’ 78s qualified too; so I bought this because it was by far the earliest HMV ‘Private Record’ I had ever seen; and for that matter, it still is. I played it, dated it to ‘about 1905’ and filed it away under ‘Early Records.’ There it remained for 33 years, until in 2004, a casual Internet reference to the song ‘Tell Mother I’ll Be There’ reminded me of the Charles Alexander disc. The Internet made it easy to discover that, a century ago, Charles McCallon Alexander was a world-famous evangelist. He was born in Meadow, Tennessee, U.S.A. on October 24th, 1867. We also learned that he had died in 1920, and was buried in Lodge Hill Cemetery, Birmingham, England. At first we were surprised by the apparent coincidence, because that is only about 2 miles from where I live, on the south west side of Birmingham, England.

However, all was explained when it emerged that in 1904, he had married Helen Cadbury, one of the daughters of Richard Cadbury, the head of the famous firm of chocolate makers in Birmingham. She had gone with her mother Emma to one of the Torrey-Alexander evangelical meetings at the Bingley Hall, Birmingham, at which the famous Dr. Torrey presided, and Charles Alexander lead the singing. Later, the members of the touring mission were invited to the Cadbury’s house in Moseley, on the south side of Birmingham. Alexander and Helen met and fell in love. They were married in July 1904, and Helen joined Alexander on many important and extensive evangelical trips, literally all over the world. 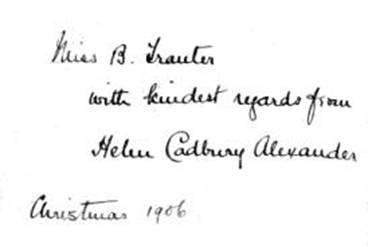 But oddly, no mention of his making records seemed to occur on the ’net. The Birmingham Reference Library was consulted. Almost the first book I found was a biography of Richard Cadbury, written by his daughter Helen. “Richard Cadbury” by Helen Cadbury Alexander. Hodder & Stoughton.London, 1906. (Inscription above copied by permission of Birmingham Reference Library.) It had been inscribed to a friend by Helen, and subsequently given to the library. It was strange that I should so soon be looking at the handwriting of someone who I had first encountered only a day or so before.

We also discovered that we needed a key book: “Charles M. Alexander: A Romance of Song and Soul-Winning” by Helen C. Alexander and J. Kennedy Maclean. Marshall Brothers, Ltd. London, undated. (Estimated date of publication 1922; not after 1924).

Oddly, the library had no copy, but it proved quite easy to obtain a copy via the Abebooks. It is a large format book of 270 pages, copiously illustrated. The sepia photographs on these pages are borrowed from it. We also obtained a copy of a more modern, smaller book: “Helen Cadbury and Charles M. Alexander” by Simon Fox. Marshall Pickering. London, 1989. This well complemented the first one. Having been written quite recently, it contained a short summary of the life of Helen Cadbury Alexander Dixon subsequent to the death of Charles in 1920. (She married the evangelist Dr. Amzi Clarence Dixon in 1924. He was much older than Helen, and died only 18 months later. Helen did not marry again.) 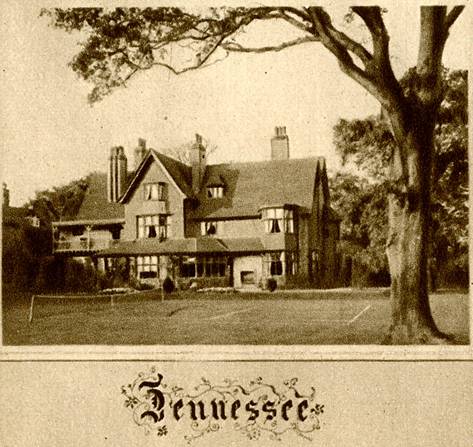 From the books, I knew that she and CMA (as we shall call him) had a fine new house, built for them by the Cadburys. It was in Moor Green Lane, Moseley. They called this house ‘Tennessee’ in memory of Alexander’s home state. The rest of her life was long and productive: she always lived at ‘Tennessee’, receiving many guests from all over the world, and was always involved with a large number of Christian and evangelical organisations, especially the Pocket Testament League, which she herself had founded. Helen died on 1st March 1969, at the age of 92, having thus survived her first husband by nearly 50 years. (For more early images, plus recent photos. of the family grave in Lodge Hill Cemetery, click here .)

She bequeathed the house and its extensive grounds to be redeveloped into accomodation for elderly people. This was done, though it seems likely that the original house was not readily adaptable to the purpose, and so brand new much larger structure was put up. It is still called ‘Tennessee’.

In any event, items remaining in the original house must have been cleared. Many of these would have been valuable or collectable, and probably donated to suitable foundations, or sent to charity auction. For example, we have been told, since this page has been on the ’net, that his personal library is now housed in a Christian establishment near Meadow, Tennessee, U.S.A., CMA’s birthplace. But some other items possibly considered of less interest, we feel certain, were cleared from the house and put on sale, in that rather unexpected Antique Shop mentioned above.

Thus, it would seem that we must have found some (or all?) of Charles Alexander’s own record collection. If only we had bought every one of them. But still, the one acquired was a crucial one, because it contains the two songs most closely identified with C.M.A.: ‘Tell Mother I’ll Be There” and above all “The Glory Song”.

“A striking instance of the way in which Alexander turned to account any opportunity for bringing the Gospel-song messages to the notice of people occurred during the great London Mission of 1905. As was often the case, malicious reports had been industriously circulated that both Dr. Torrey and Mr. Alexander were making a fortune out of their work. London was already ringing with the new melodies which had captivated the great throngs at the Royal Albert Hall day after day. The Gramophone Company approached Alexander with a handsome business proposition for the making of a number of records, which, with the additional royalties, would have brought him in a large sum of money. To their surprise he definitely refused at first. On further persuasion he said: “I will not accept one penny for myself, either now or later. But I’ll give you some records, both in song and in spoken incidents, if you will take a big space in one of the leading London dailies, and print the “Glory Song” above your advertisement, also adding that I am giving you the records free, without remuneration or royalty.” Astonished by the unselfish generosity of the proposal, and finding it useless to persuade him to receive any payment, the conditions were readily acceded to, with the result that “Glory Song” entered hundreds of thousands of homes in Great Britain; while, by means of the gramophone records, the very voice of the singer carried its message in song, and told incidents of the meetings to people even in far-off lands. It was reported at the time that the sales during the first few days amounted to ten thousand records. In their distant journeyings, Alexander and his wife met with some strange surprises at unexpectedly hearing the sound of his voice”.

Thanks to the help of various record researchers, the issued titles by CMA and his associates are given below. Rather than burden this page with a mass of discographical detail, that will be found here on a separate page.

Nine single-sided Records of CMA were issued at that time. We decided to try to collect them all. Actually, one recording was put out twice, and as they are different ‘takes’, there are in fact ten discs we need to find if we wish to make a complete collection of the recorded output of Charles Alexander.

Over the years, we have gradually obtained seven of the nine titles, and transferred them to the best of our ability. The label of each is illustrated; click the arrow on the play-bar below the labels and you will hear the recordings.

However, before you do so, and if you are not familiar with sound recordings made well over a century ago, they will at first sound very strange to you, jumbly and even incomprehensible. And you may be surprised – perhaps even disconcerted – by the stentorian vigour with which they are delivered by CMA. But remember, he sang (often in the open air) to audiences numbering many thousands, and there was no electrical amplification in 1905. Don’t play them too loud to start with, and pretty soon, you’ll be on a marvellous Trip Through Time, to London, 113 years ago! 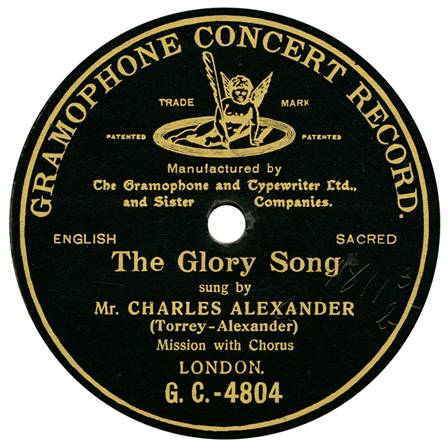 No.1: THE GLORY SONG – First version; February 1905.
Alas, the first of the recordings is in the worst condition. 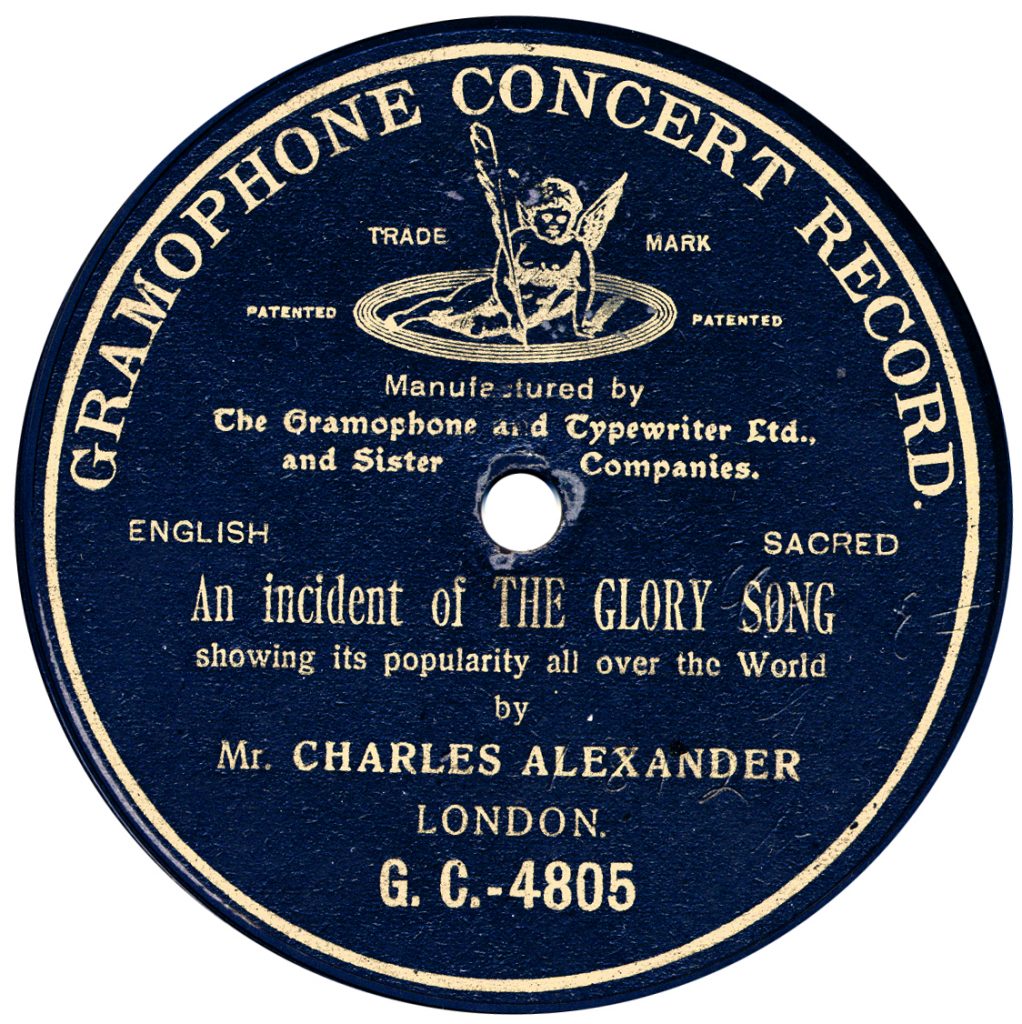 No.2: An incident of THE GLORY SONG.
CMA relates an incident in Melbourne, Australia. 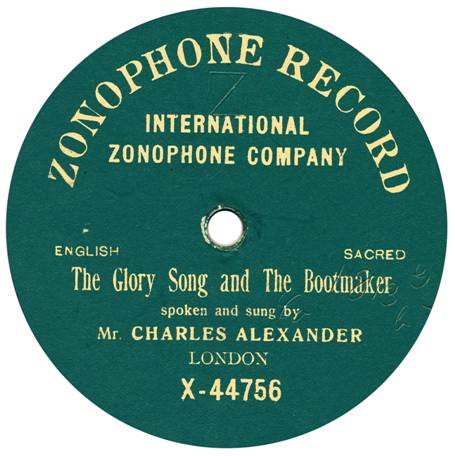 No.3: THE GLORY SONG and the Bootmaker.
Here, CMA tells of another incident during the Torrey-Alexander mission in Australia. 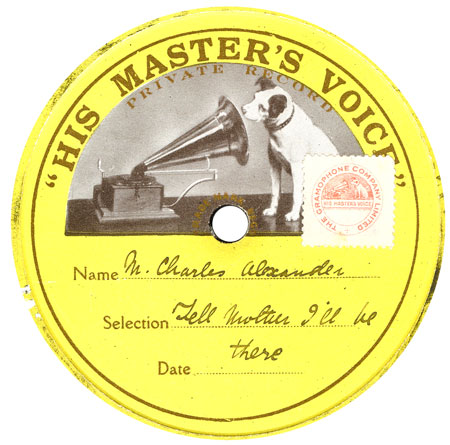 No.4: TELL MOTHER I’LL BE THERE with incident.
On this disc, CMA receives a letter from an unfortunate repentant, whose mother died
just at the time he had renounced his ill-spent past. 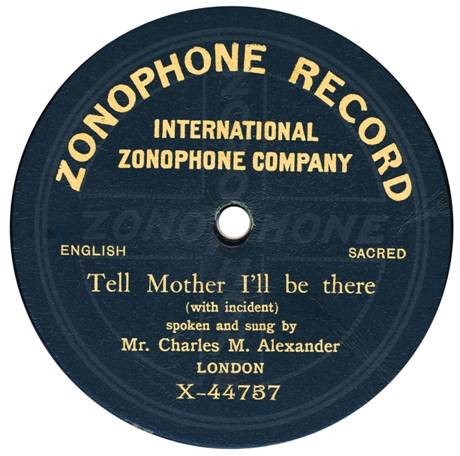 No.5: TELL MOTHER I’LL BE THERE with conversion of Humorous Entertainer.
In much the same vein, the first side from the second session relates how a stage comedy performer renounced his hitherto trivial life, and turned to become a fellow evangelist. 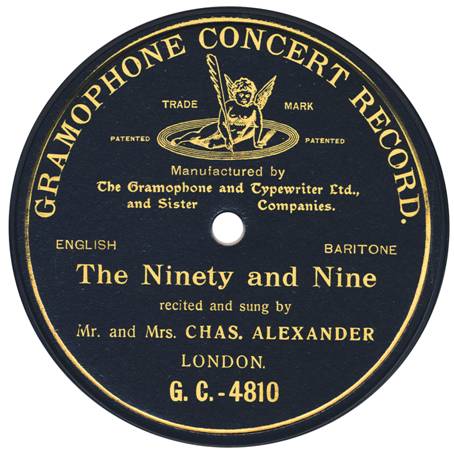 No.8: THE NINETY AND NINE.
This is in many ways the most interesting of the discs, as Helen Cadbury Alexander (age 28) reads a transcription of the famous hymn-poem ‘The Ninety and Nine’. She is not credited as a performer in the Gramophone Company files, but the label of the disc and its content just goes to show, you cannot take any written record for granted – even from the E.M.I. Archives! 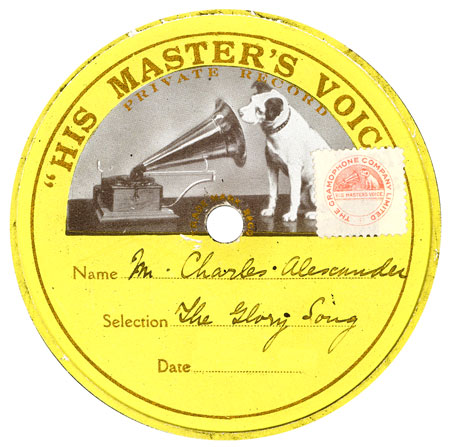 No.10: THE GLORY SONG – second version; April 1905.
This, the last of the issued recordings, is very much a re-make of the first one above. However this disc is in much better condition. Double sided discs were not made by the Gramophone Company until 1912 – and indeed, the Gramophone Company was not even called ‘His Master’s Voice’ until 1910; so clearly this one, which is double-sided, dates from after 1912. Furthermore, the fact that the trade mark is in sepia, firmly fixes it in the wartime austerity period 1915 – 1919 or even 1920, when the colour was reinstated. It is most likely that CMA had this disc pressed to order by HMV, perhaps in a small quantity, for family and friends? We are, of course, still looking for the other three discs…