12th April 2015. We have been re-reading a book bought some years ago, but only skimmed through it at the time. ‘The Atlantic Telegraph’, W H Russell. Nonsuch. Stroud, Gloucestershire, 2005. It’s a reprint of a book originally published in 1866. It details the story of the laying of the first transatlantic telegraph cables. The earliest was in 1858, but it only worked for a short time. The second main attempt was in 1865, and is described in great detail in the book. Unfortunately, this attempt had to be abandoned, as the cable broke after about three-quarters of it had been laid, and could not be grappled up, though several attempts nearly succeeded. The book ends there; but in 1866, not only was a new cable successfully laid, but also the 1865 one was successfully raised, spliced, and brought ashore in Newfoundland, so that all at once, there were two workable cables. They remained in working order for many years.

This reminded us that we had, quite casually, bought a sample of cable at an auction a few years ago, but had just left it lying around. It was time to investigate it! 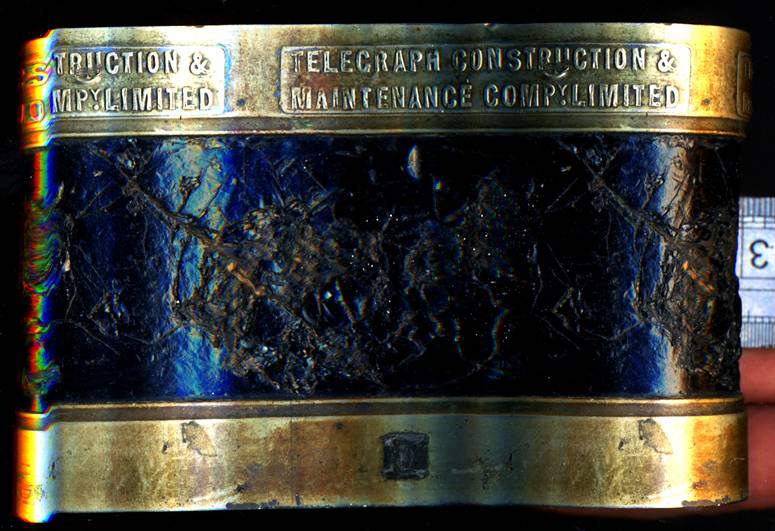 The sample was 3″ (76mm) long, the ends clad with brass ferrules. The late Richard Taylor pointed out to us that it was possible to get an image of a cylindrical object, by rolling it along the bed of a scanner following the light. We have used this e.g. for getting images of phonograph cylinder boxes, and it proved quite easy to get the shot above. The Telegraph Construction & Maintenance Co. were involved in the 1865 cable, along with the Atlantic Cable Co., who actually raised the enormous amount of money required for the venture. The American financier Cyrus Field (no relation!) was the driving force behind the whole project. Later known as Telcon, the firm had a continuous existence until 1961, when it became part of British Insulated Callender’s Cables. 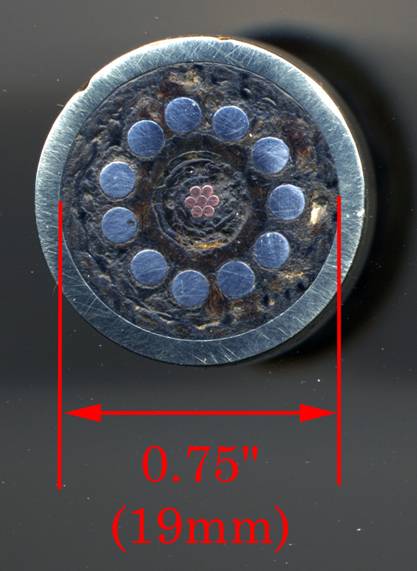 Here you can see that the central core has seven thin copper conductors – the six twisted round the centre one – in a layer of gutta percha, which is a good electrical insulator. Gutta percha is a latex from certain trees & was an important inspiration for the development of synthetic plastics. There are various other layers in the cable, principally eleven iron wires – also twisted together – to give tensile strength to the cable. It also seems to be bound round with fibres of hemp or jute or something like that; all this embedded in Chatterton’s Compound. This consists of 3 parts of gutta percha, one part of rosin and one part of Stockholm Tar (high-grade pine tar). Whatever would we do without Wikipedia!

Such samples of different cables were primarily made to be shown, or presented, to potential customers for submarine telegraph cables. Presumably a short run of a few miles to connect a couple of islands, over a sandy sea-bed, could be accomplished by a relatively small, cheap cable. While a serious cable would have to be much larger, stronger & naturally more expensive. Also, sections of famous cables were sometimes cut up, mounted & sold as souvenirs. Hundreds of 4″ (102mm) lengths of the first transatlantic cable were prepared by Tiffany’s in New York & sold as souvenirs, together with a facsimile letter signed by Cyrus Field, vouching for their genuineness.

This particular sample must be quite old, probably well before 1900. We cannot claim any particular date, but the 1858 cable had eighteen iron wires, each of seven strands, for tensile strength. The 1865 cable had ten single strands of 13 gauge “Homogeneous Iron” wire. (If this is 13 SWG (Standard Wire Gauge), that would be 0.092″ or 2.34mm diameter.)  The 1866 cable had twelve strands. But the sample above has eleven iron wires, so cannot be from either the 1865 or the 1866 cable. Sigh. But otherwise it is quite similar, so we are potentially claiming our fragment as ‘pretty early’. 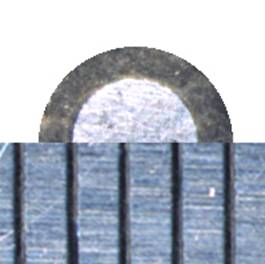 Here is one iron strand, with a millimetre steel rule superimposed. Both have been magnified the same. The strand diameter is pretty close to 2.34mm., so it’s probably made to a similar spec. as the 1865/6 cable.

After writing the above guff, we discovered the website http://atlantic-cable.com/ which has a mind-boggling amount of history & images of the entire era of intercontinental cables, & all sorts of telecommunications via cable, (telegraphic, telephonic &c.) & right up to optic fibre. We have spent a lot of time there, and one thing we discovered early on that cables of this type were still being laid well into the 20th Century. (If it ain’t bust, don’t fix it!)