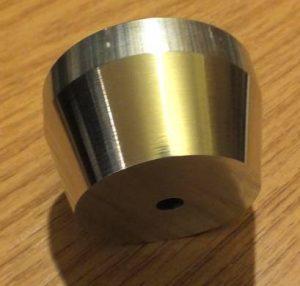 24th January 2014. We needed to make a tapering bush for our phonograph cylinder player project. (Two, actually; one for each end of the cylinder, but that’s not important right now.) Above you see the first. It’s a piece of 2″ diameter aluminium bar, about 1.125″ long. But we had to a machine a taper on it, so that it would go inside the cylinder record and support it. After measuring a number of cylinders, we decided that the taper should go from 2″ to 1.6″ over about 0.75 of an inch. Fine, we thought, and set up the compound slide on our little lathe. But then arose a problem – what angle did we need to set to achieve our desired taper? I suppose we could just have tried the ‘suck it and see’ approach, but this was uninviting. Then I remembered, yet again, dear old Dr. Kober. He was our third-year form master, which would have been in the academic year 1957-58, at Camp Hill Grammar School, Birmingham. He taught maths, at which I was always dreadful. However, when we started on Trigonometry, he wrote on the blackboard three mnemonics, acronyms: CASH, SOLO and TOAD, which have stayed with me ever since. Of course, Trigonometry is all to do with right-angled triangles, so let’s look at one: 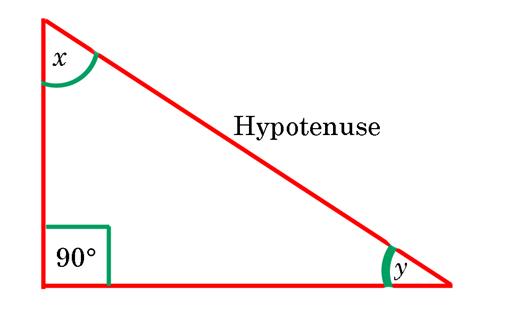 For any of the three angles in the triangle, the word TOAD meant: Tangent = length of the Opposite side divided by the length of the ADjacent side. Hence TOAD. (The adjacent side could not be the Hypotenuse, because that was the special, exalted side of the triangle.)

Similarly, SOLO meant Sine = length of the Opposite side divided by length of the LOngest side (i.e. the Hypotenuse). Hence SOLO.

This was clearly the way forward! We rapidly drew our triangle…

Cosine = Adjacent Side divided by Hypotenuse; and angles, as I dimly recall, are often called θ, so:

From online tables, θ = 15°, almost exactly. Bingo. Hence the lump of metal in the image above.

It is indeed a tribute to the teaching abilities of Dr. Kober, that I still remember CASH, SOLO and TOAD to this day, and better still, have been able to use his mnemonics to solve a problem, more than once. He had a wonderful way of ‘putting things over’ to his sometimes rather indifferent, or in my case opaque, pupils. He still did this, when it was widely discussed & believed, that he had been in a Concentration Camp in during WW2, and had come to the U.K. afterwards; though this can only be conjecture on my part. It was so long ago. Yet I still remember quite clearly, after he had been absent for some time through illness, he returned, ebulliently, to our class, and proclaimed: ‘Hello boys! Good to see you. I hope you haven’t missed me?’ At that point, the Form Captain should have told us to stand up and applaud this valiant man. But I fear this did not happen. Still, the foregoing may stand as a small but sincere tribute to an excellent teacher who imparted many useful things to a large number of pupils, the best part of 60 years ago.