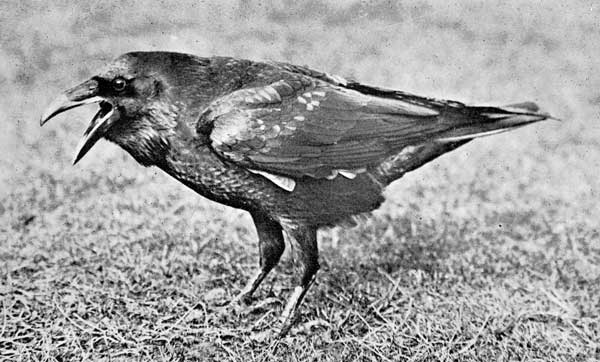 In what seems to have been a lifetime of driving on motorways, there are three crows that particularly come to mind.

There was in fact a fourth memorable crow, which, for some reason, uttered a harsh scream at 5 o’clock one morning right outside my tent. Just such a calling crow, photographed long ago by the great naturalist O.G. Pike, is illustrated here. It was small tent, and I’m sure the crow was no further than a foot from my head when it cried out, and I can tell you that it’s not only very loud that close up, but very un-nerving when you aren’t expecting it! But in any case, that crow was not on a motorway, as were the others.

Besides, the three crows I am going to tell you about all left me with pleasant, or at least, thought-provoking memories…

The first crow simply glided across the motorway. A knowledgeable friend of mine tells me that crows are good fliers, surely a prerequisite for a bird, unless of course, in the absence of significant predators, they were directed by Dame Nature to evolve into kiwis, emus, ostriches and so on. Anyhow, I was driving north in little traffic (it was a long time ago). It was winter, and the wind was blowing very fierce from the west. The crow was gliding across the motorway into the wind, and I noticed at once that its angle of descent was excessive. At the rate it was losing height, it would not reach the other side of the road, but intersect the road surface in about the middle lane on my side. It could obviously not flap its wings, as it must fall sharply if it lifted them to flap them, and then all would be lost. It cleared the central reservation into my side of the road. I wondered what would it do. Of course, I was getting nearer all the time, and was therefore in an excellent position to see what would transpire.

The crow ‘optimised’ its shape. Well, it was already a very good shape for gliding into the wind: streamlined, equipped with just the right number and type of feathers in the right places. But it had realised that its current shape was not good enough to get across the motorway, and as we shall see very soon, crows are far too sensible to land willy-nilly in any lane of a motorway. Besides, such a proceeding is undignified in any case.

No: the crow simply assumed an even better shape. I actually saw it change. I can’t describe exactly what it did, but it altered and became even more ‘crow-like’. Its angle of descent flattened out markedly, so that its path would take it not only over the road, but also over the hedge past the hard shoulder, and into the field beyond.

By that time, I had gone past it, and was lost in admiration. How did it know it could avoid ‘crashing’? Why had it not assumed its revised shape earlier, and so crossed the motorway higher up, without the need for further optimisation, and the possible risk attendant on low flying? I once saw a wood pigeon so low over the motorway that I glanced into the rear-view mirror, and saw it literally explode into an unbelievable cloud of feathers against the heavy lorry behind. ‘My’ crow was far too organised for anything like that to happen to it.

Are crows ‘better’ than wood pigeons? Of course not; except for the fact that, by mischance, they are more adapted to survival in our present-day mechanised world than are pigeons.  >8^(

The second crow was dancing. It was summer this time, and the road was following a very long dip and curve so that I could see it just inside the hard shoulder from a great way off.

“What’s the matter with that crow?” I thought. I could see that it had skipped out into the middle of the slow lane. But there was a lorry in front, and by the time I could see it again, it was back just behind the white line, jumping and dancing again. There was quite a distance between me and the lorry which had now passed the crow, and it dashed back into the middle of the slow lane, and began frantically pecking at what could only be some piece of carrion, a hedgehog perhaps, that had been run over and flattened into the road.

Much as I might have wished to further the gastronomic inclinations of this crow, the traffic was relatively heavy and I was confined to the slow lane. At the appropriate moment (and as we have learned, crows are very good at knowing what that moment is), it skipped back to just the other side of the white line of the hard shoulder. As I came up to it, it was dancing, hopping and capering madly in an access of frustration at having before it a meal, yet knowing that the continual traffic must be respected and avoided at all costs.

I don’t think I’ve ever seen such a graphic embodiment of the frustrations of human life. The things we want; the things we can’t have; the precautions we need to take in order to get what little bit we can have!

The third crow was again in winter: December in fact. It was a Sunday and I had had a lunch-time engagement somewhere in Northamptonshire, and was en route to another one in the evening. My situation had little to recommend it. I was tired; I had about seventy miles to drive, all of it in the wrong direction, so that, when the evening was over at say 11:00 pm, I would have to drive at least 150 miles to get home. I had not eaten; it was cold, and worse, it was quite foggy. So the traffic on the M1 was at a standstill. It was late dusk. I admit that I was thoroughly fed up. I leaned forward and looked up through the windscreen in an attempt to see if the fog was really just a dense but shallow mist that might somehow, by a minor miracle, dissipate and allow the traffic to proceed.

Then I saw the crow! Or rather, just a dim, faint outline of a crow, skimming overhead, at the limit of my visibility, through the mist in a dead straight line.

This was ridiculous! What was a crow – or any bird, come to that – doing flying around at late dusk, in a dense mist in December? Where was it going? Where had it come from? What imperative drove it on its errand? Was it going home to roost? Had it already chosen a roost, but found it deficient in some way, and so it needed another? It was nearly the Winter Solstice, when the ‘life-force’ of every living creature wanes and burns at its most fitful. Do crows have to look for food even when it’s dark and misty in December? Shouldn’t they have done that earlier in the day?

I shivered at the thought, but it somehow woke me up from my dreary state. There were so many things to think about! But before I had much chance to do so, the traffic began to move again, and pretty soon I had actually got onto the M25! I can’t remember anything about the engagement, but will never forget the crow.

As a bonus, gentle reader, here is an mp3 sound file of genuine Vintage English Crows. It was made about 1937 by the pioneer wild-life recordist Ludwig Koch…