Most of us know the famous British Dance bands of this time: The Savoy Orpheans, The Savoy Havana Band, Jack Hylton, Percival Mackey and so on, mostly because they made records for the major labels, and which can still be found, often in abundance. There was of course a ‘second string’ of bands. They also made records, naturally for the less important labels. Charles Renard (on Regal), the American bandleader Don Parker (on Vocalion), Victor Vorzanger (on Vocalion subsidiary labels), and so on. Almost all of these bands were, naturally, based in London. But there was a third & fourth string &c. of bands who spent their entire existence giving dancing pleasure to thousands of people, but are now totally obscure because they never recorded. These were the provincial dance bands. They did not usually travel very far – few people had cars, and there was little point in, say, a Nottingham-based band seeking work in Lincoln, as there would have bands based there already. Most of the interest in these bands will come from their children, grandchildren or great-grandchildren. Perhaps a photograph (often a postcard), or some press cuttings exist in the family archive – perhaps, even a scrap-book? There is quite a lot to be found out about many of these bands – but it requires painstaking study of local newspapers. Also, from the mid-1920s right up until the late 1940s, the Melody Maker magazine (later a newspaper) ran regional and national Dance Band Contests, which were reported and much detail given, including photographs. We will never know how good (or how bad!) these bands were; but Postcards are an efficient source in preserving images of some of them. We are not expert in this field (happily, there are many who are); but today several examples were acquired, and are presented here, with such little detail as accompanied them, or can be inferred from the postcard itself.

My old friend Steven Walker kindly looked at these images, and made many useful comments, which appear in these red italics, beneath my own ramblings. 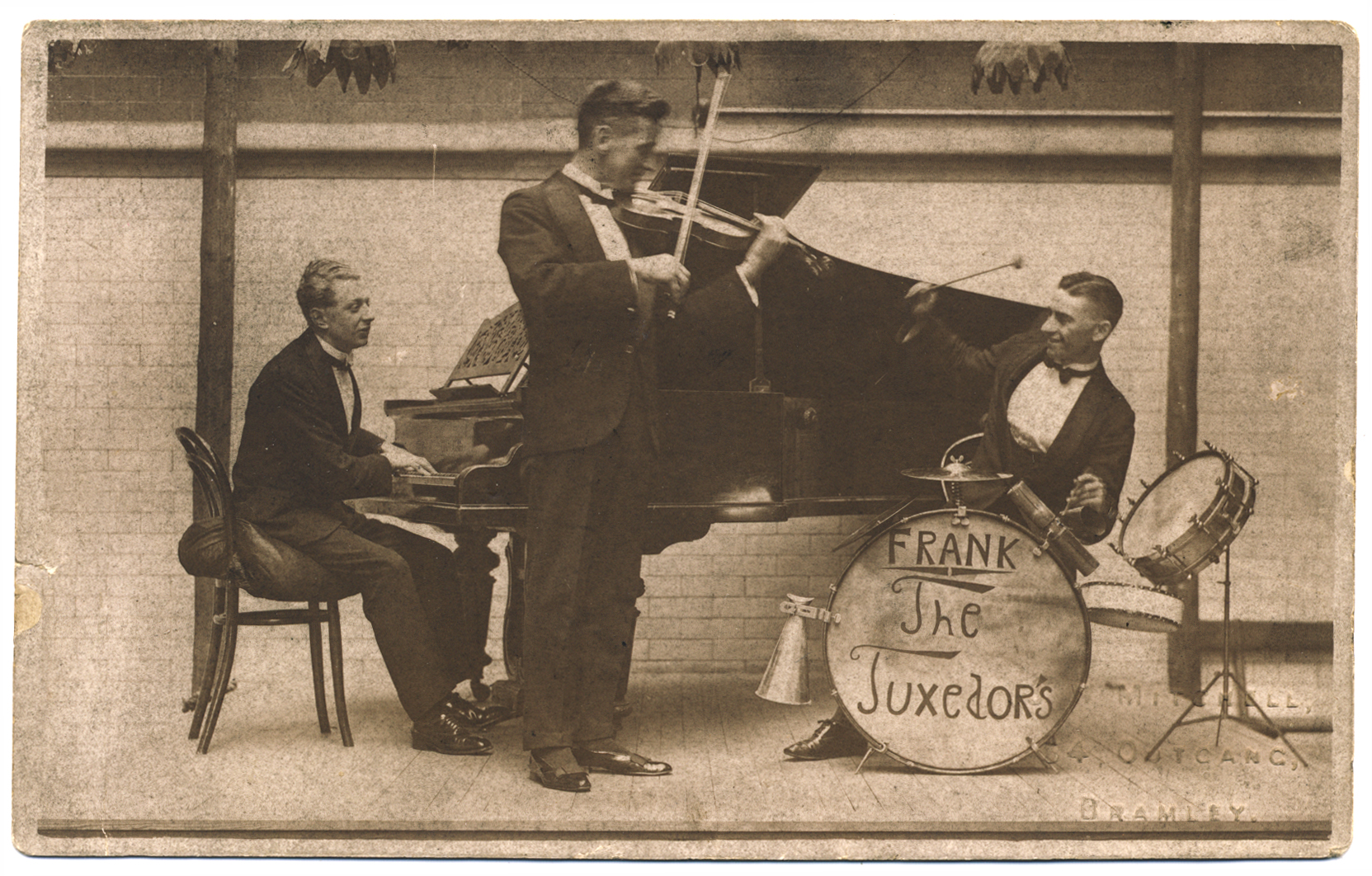 This is dated 1925, obviously in antiquity, in red ink on the reverse. The embossed address of the producer tells us that they were located in Bramley. There is more than one Bramley in the U.K., but the street ‘Outgang’ (is that Anglo-Saxon or Danish?) clearly indicates Leeds, Yorkshire. So we know quite a lot about this trio.

FRANK, THE TUXEDOR’S (sic) – great name for a band, pity he was a grocer – this might well be 1925, but the drummer is evidently under the impression it’s still 1918. Plus the fact that he has the tension brackets on his snare drum upside-down, thereby fencing off his batter head with a forest of handles. Perhaps they played in such damp venues that he spent more time pulling his drum up than hitting it. It’s Grim Up North. 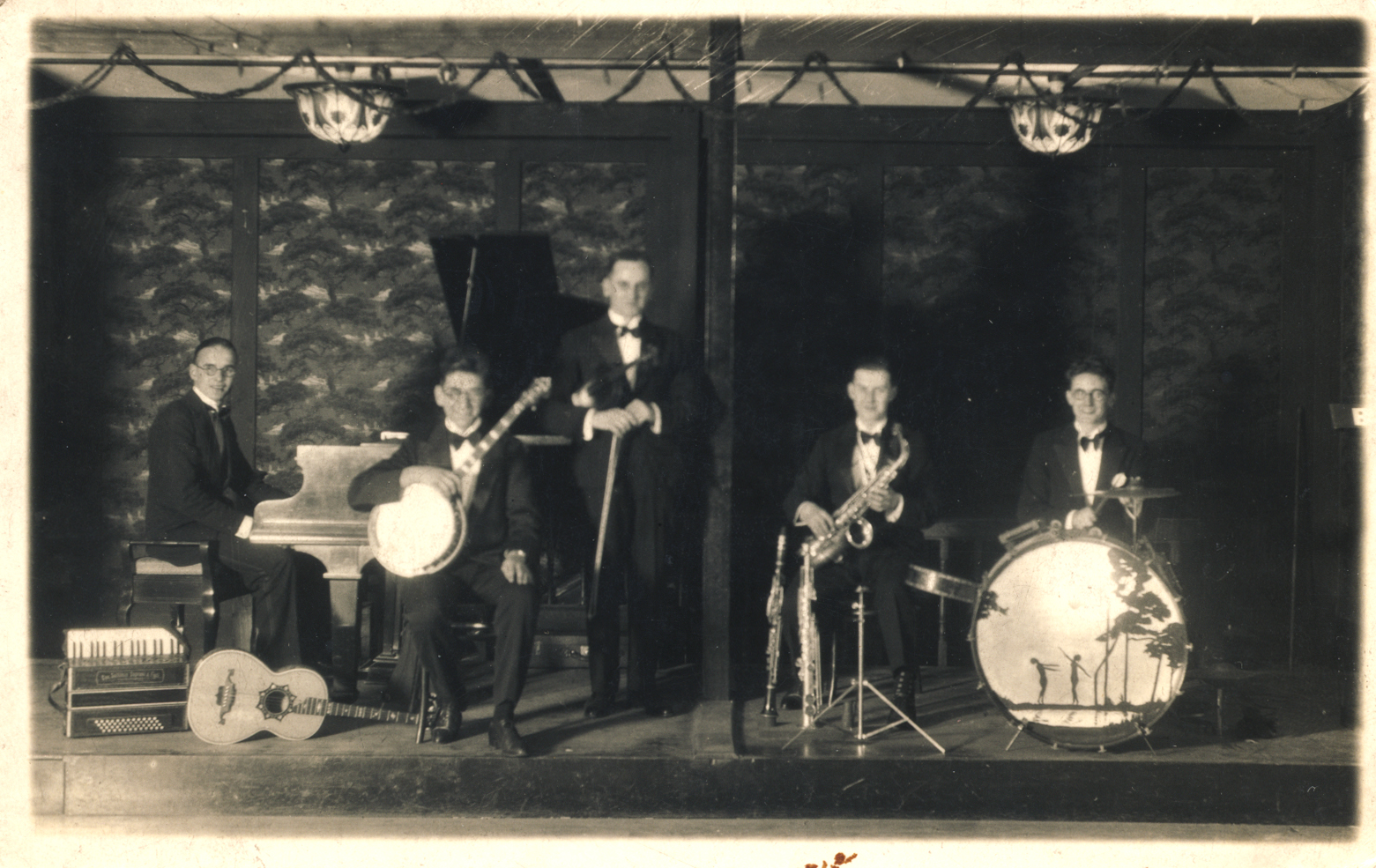 Apart from the fact that three of the five band members wear glasses, there is nothing whatsoever on this card which gives us the slightest clue as to it location or origins. We have a tenor banjo, a simple system clarinet, a guitar with ornamentation around the sound-hole, an accordion, and not to forget the art-work on the bass drum – these are probably the only clues to date the ensemble. If pushed, I’d plump for 1927 or 1928.

Can’t see whether it’s a tenor guitar, since he has his foot in front of the peg-head, but the neck is thin enough to be. The drum-head is a commercial design by Leedy from the USA; they were imported here. 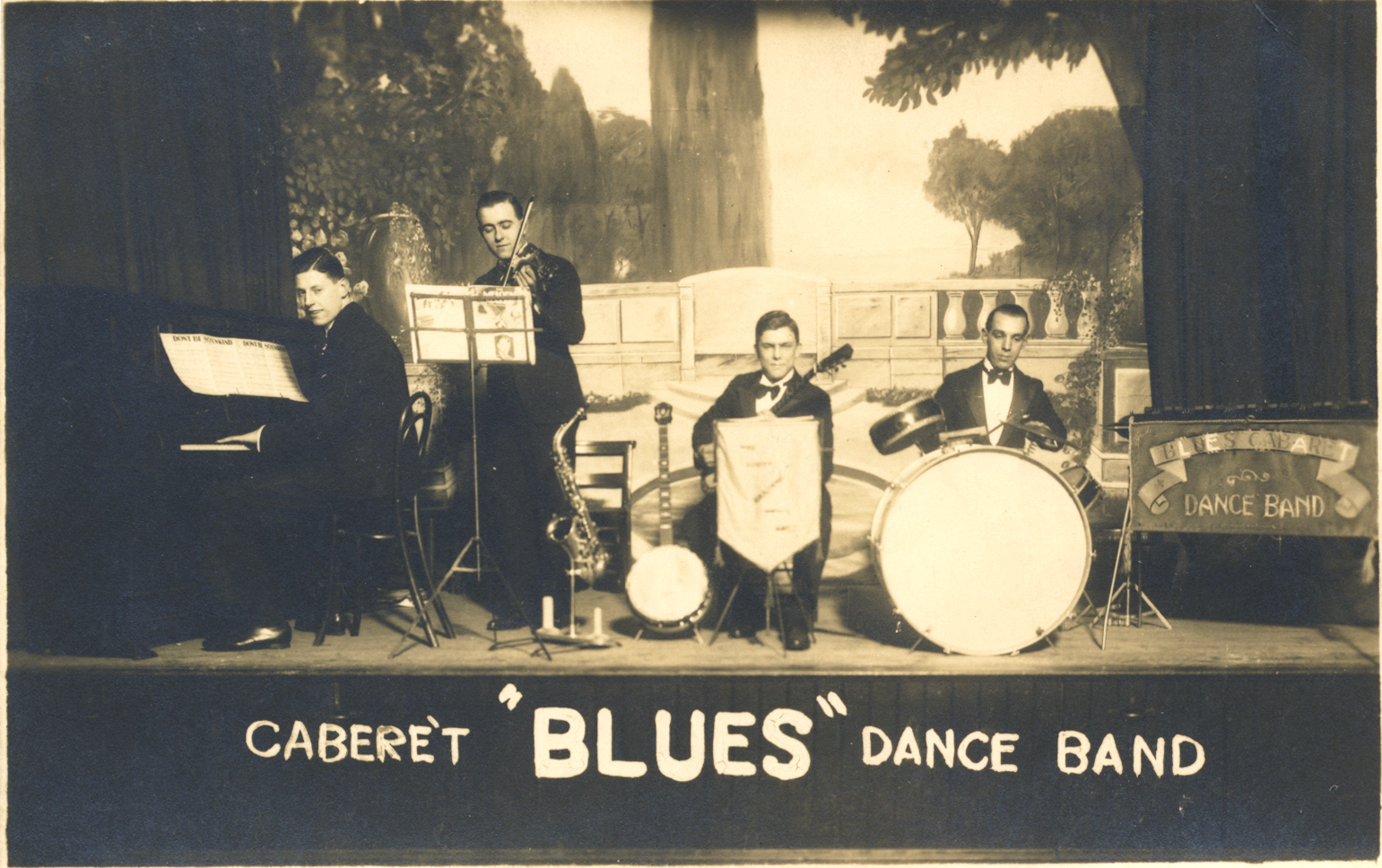 Much the same applies to the ‘Blues Cabaret Dance Band’ – which is the name on their banner, as opposed to the titling at the foot of the card. Nothing else on the card. Still, we can see the music on the piano – which is ‘Don’t Be So Unkind’. A tune was current in 1930 as ‘Don’t Be So Unkind, Baby’; thus we attribute this date to the image. A band would hardly be photographed with an old piece on the piano? The banjo/guitar player is ‘a stunner’ isn’t he, girls? Or perhaps you might prefer the quieter, more reserved charms of the introspective-looking drummer? (Actually, I can tell you from 50 years’ experience on the bandstand, that ‘introspective drummers’ are very few and far between…)

The violinist is playing from a copy of The Melody Maker. If you can send me an enlarged detail of this, Norman, I’ll try to identify the issue.

Did I ever send it you, Steven? 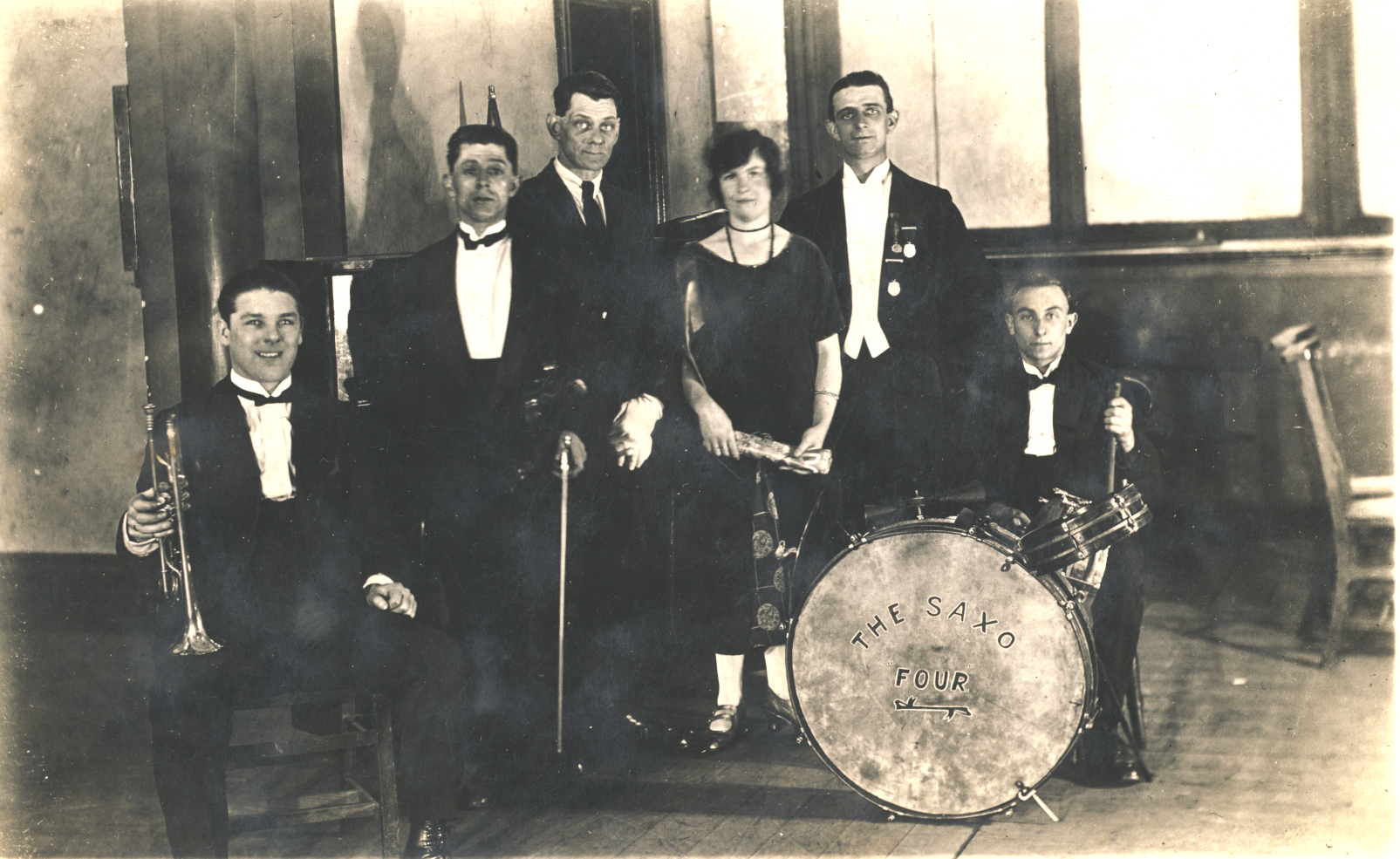 The ‘Saxo Four’ (of whom there are no less than six) at first puzzled me slightly, as there was not a saxophone immediately apparent. It then dawned on me that the object held by the lady band member might be the eponymous ‘Saxo’ – which might be a small slide saxophone, or even something else, perhaps even a roll of parchment. The band logo looks as if it has been applied to the bass drum as an overlay. But as for the rest, there is nothing else printed, embossed or implied in any way on the either side of the card. The member with the white gloves (the pianist?) appears detached and introspective, while the trumpet player is extremely ebullient. But then, trumpet players frequently are, as they have to launch into things, which may not quite emerge from the bell of their horn exactly as anticipated. Thus the supreme confidence they must always possess.

There are indeed only four in the band, Norman – the gentleman in white gloves and the gentleman in full evening dress with the medals are both wearing Masonic regalia and are not part of the band. Looks to me like an amateur ‘stunt’ band formed for a Masonic Ladies’ Night entertainment. I bet you the chap in white tie & tails was Worshipful Master that night, and that the woman is his wife, and therefore “The Lady Of The Evening”.

Crikey! I’ve got even more things wrong than usual. But Steven: there are only 6 people in the shot. So if you take out the lady with the roll of parchment, and the two chaps, the one with gloves and the one with the white tie, that only leaves three people in ‘The Saxo Four’. There’s a trumpet, violin and drums, so there must have been a piano player, or the band wouldn’t work. Wait a minute! Perhaps it’s the piano player who was taking the photograph? 8^) 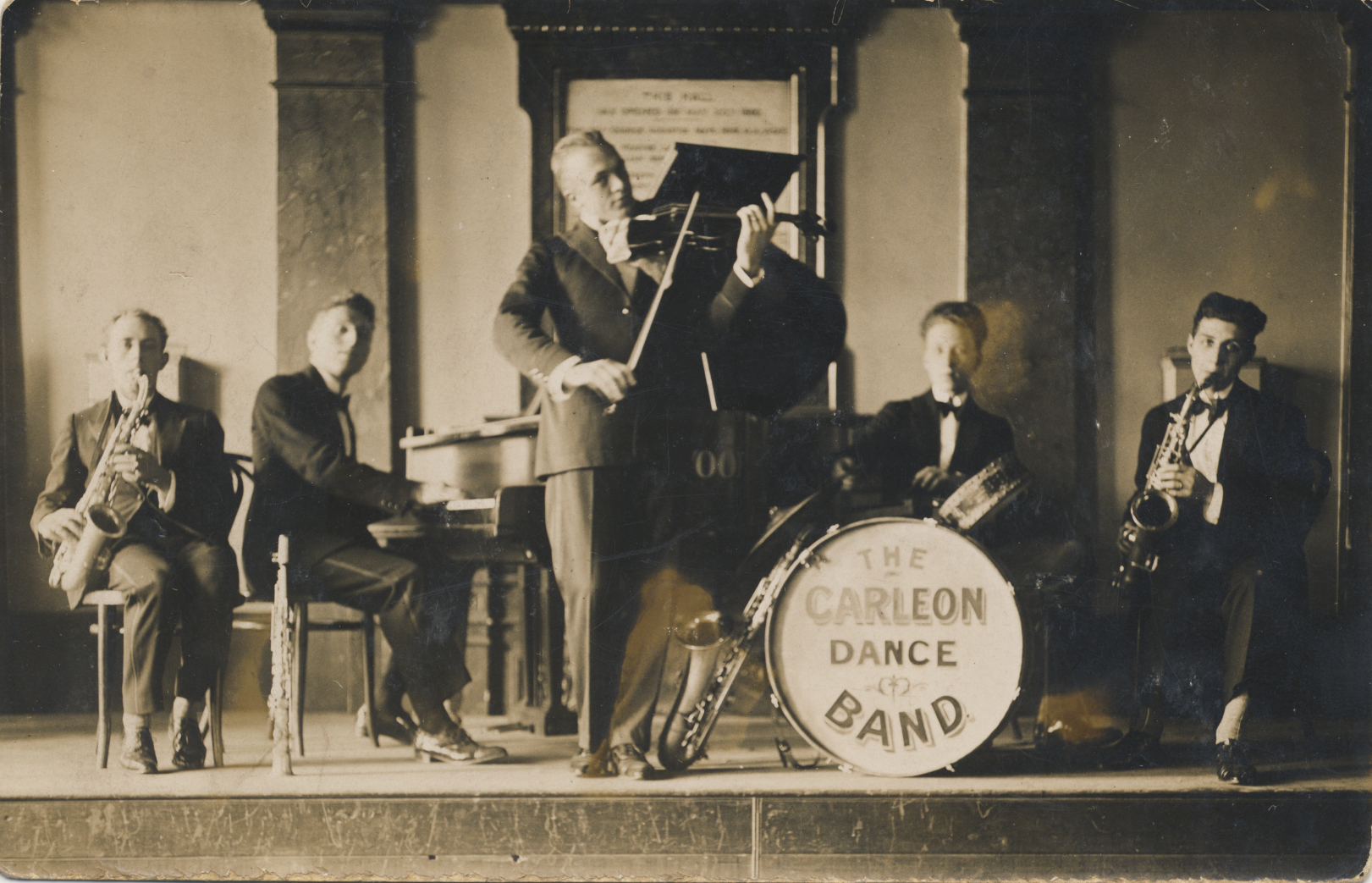 Yet again, there is no printer, no location, no nothing on the card that can give us a clue as to its origins. And precious little to indicate its date. The violinist seems to have a C-melody saxophone propped up against the drums… Indeed, both the other saxophonists may well be playing the C-melody too. Oh dear; so little to go on. Mind you, there seems to be a Broadwood grand piano, so this is clearly an up-market venue of its time, not to mention the marble columns and plaque behind the band. I give it up! 1924, 1925? I wonder what three C-melody saxophones playing together, sound like? There is no example of it on record, so far as I am aware…

CARLEON – easily obtained by being co-led by Carl (whoever) and Leon (whatever). They’re all young enough to be sixth-formers, with their housemaster joining in far left. 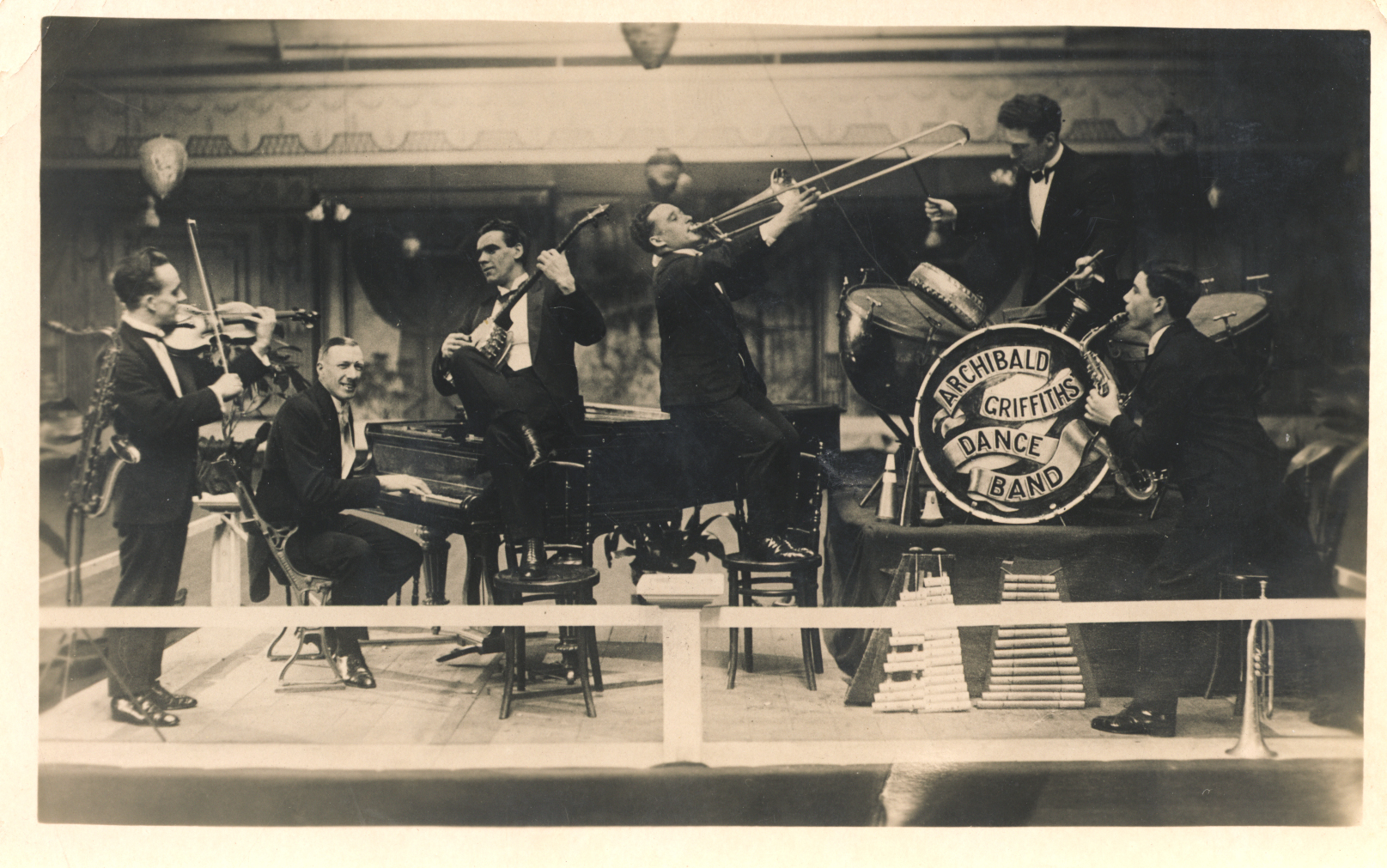 At last comes a clue to the location of this animated shot of the Archibald Griffiths Dance Band. The publisher is King & Wilson, Theatrical Photographers and View Publishers, 8 Pier Arcade, Bognor. Note that again, the violinist has a C-melody saxophone close to hand. As the ‘modern’ dance band evolved, during & immediately after the Great War, the advent of the saxophone remorselessly displaced the many violins which had hitherto prevailed. For survival, a multitude of violinist hastened to learn the saxophone, as a safety-net. The drummer has the formidable resource of two tympani – a rare thing, not to mention the marimbas (or whatever they are) also on display. Perhaps, therefore, he is the leader of the band? Alas, we shall probably never know. Early, I think; possibly 1923 – 1925.

On the floor are (left) a chromatic glockenspiel and (right) a curiously diatonic wooden xylophone of extremely limited compass and use. 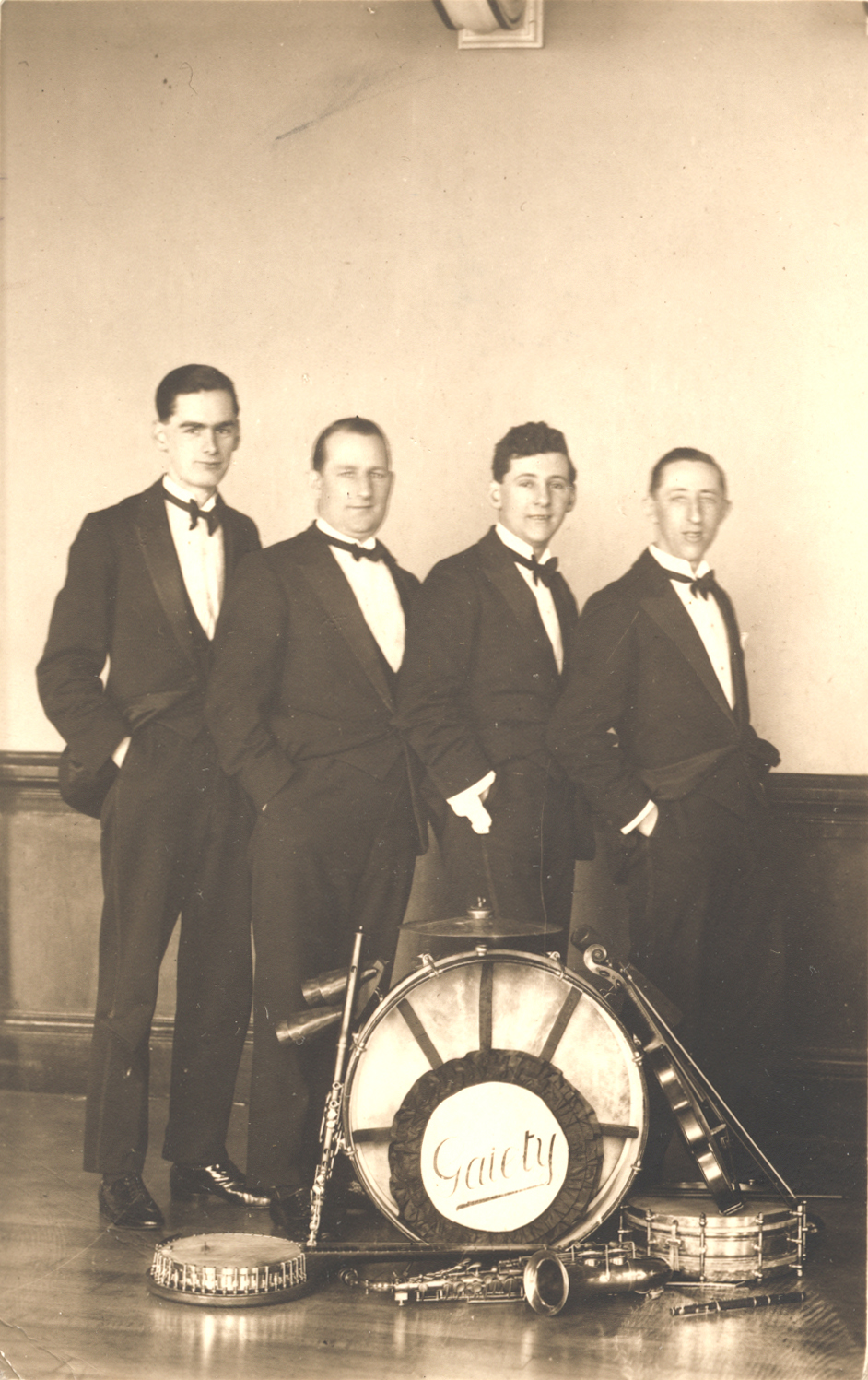 The ‘Gaiety’ what? We presumably have saxophone (doubling on violin (or vice versa), flute & piccolo – the latter rarely seen in a dance band!), piano, banjo & drums. Yet again, not a sausage on the postcard to indicate the origin or location of this modest, but evidently well-intentioned ensemble.

Got one at last. A contingent from Wander & Addy’s Syncopated Orchestra, Boston, Lincs., 1924. I have two or three more postcards here of this band in varying formation. These postcards used to turn up quite often in Lincolnshire, since Geo. F Addy was himself a professional photographer, with a shop and studio in Bargate, Boston. 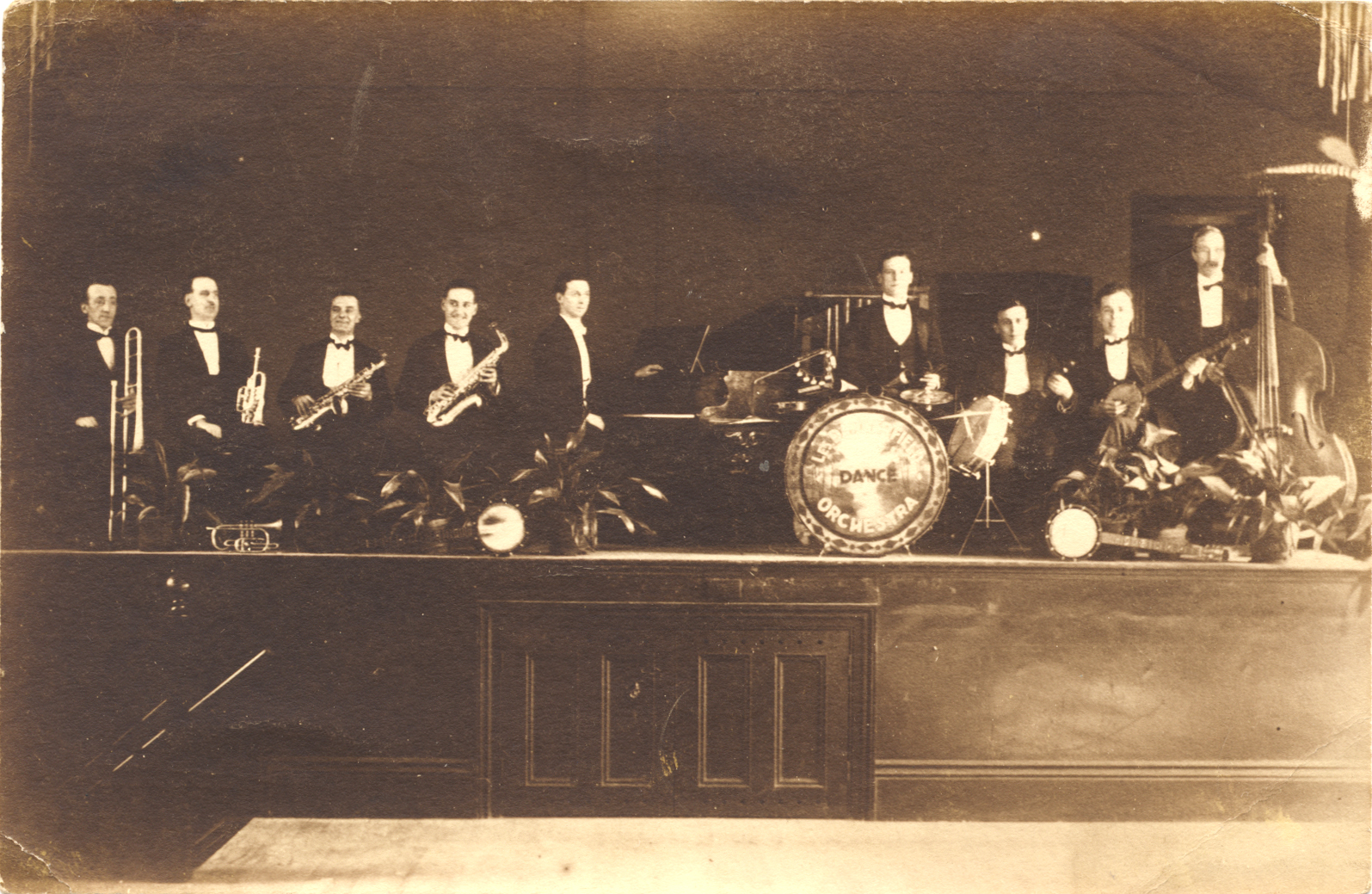 At last: something clearer. No less than two images of the Les Dangerfield Dance Orchestra. This one we assume is the earlier, as a small multitude of zither banjos are present. These were state-of-the-art in rather earlier times, and are seldom seen in dance bands as we know them, even in the era of this shot. However, there is a greater surprise in store, for this is the only card (so far) that has been postally used. The postmark is Croydon, (Surrey), 10 p.m. on August 13th, 193? – blast! The rest of the postmark is incomplete. But is surely must be very early in the 1930s? We even have a cornet instead of a trumpet – probably he was a local brass bandsman who didn’t mind selling out & playing ‘modern dance music’ for thirty shillings a gig. Which was quite a lot of money in those days, believe me. The message on the card reads: “15 Tavistock Grove, Croydon, August 12th. Dear Auntie, am starting holidays next week, so shall be down to see you. Idafen (?) you are both kufering (?) Eveenau (?) P.C. Percy is the second from the left. Love from all. Charles.” Therefore this is most likely a postcard from a member of the band, and the cornet player above is Percy. Well, it’s a start. The postcard was addressed to Miss M Brown, “Westmere”, 24 Horsham Rd., Crawley, Sussex.

The curious instrumentations and plethora of zither-banjos may have been influenced by the proximity of the Croydon BMG Club, which was very strong before the Second War. 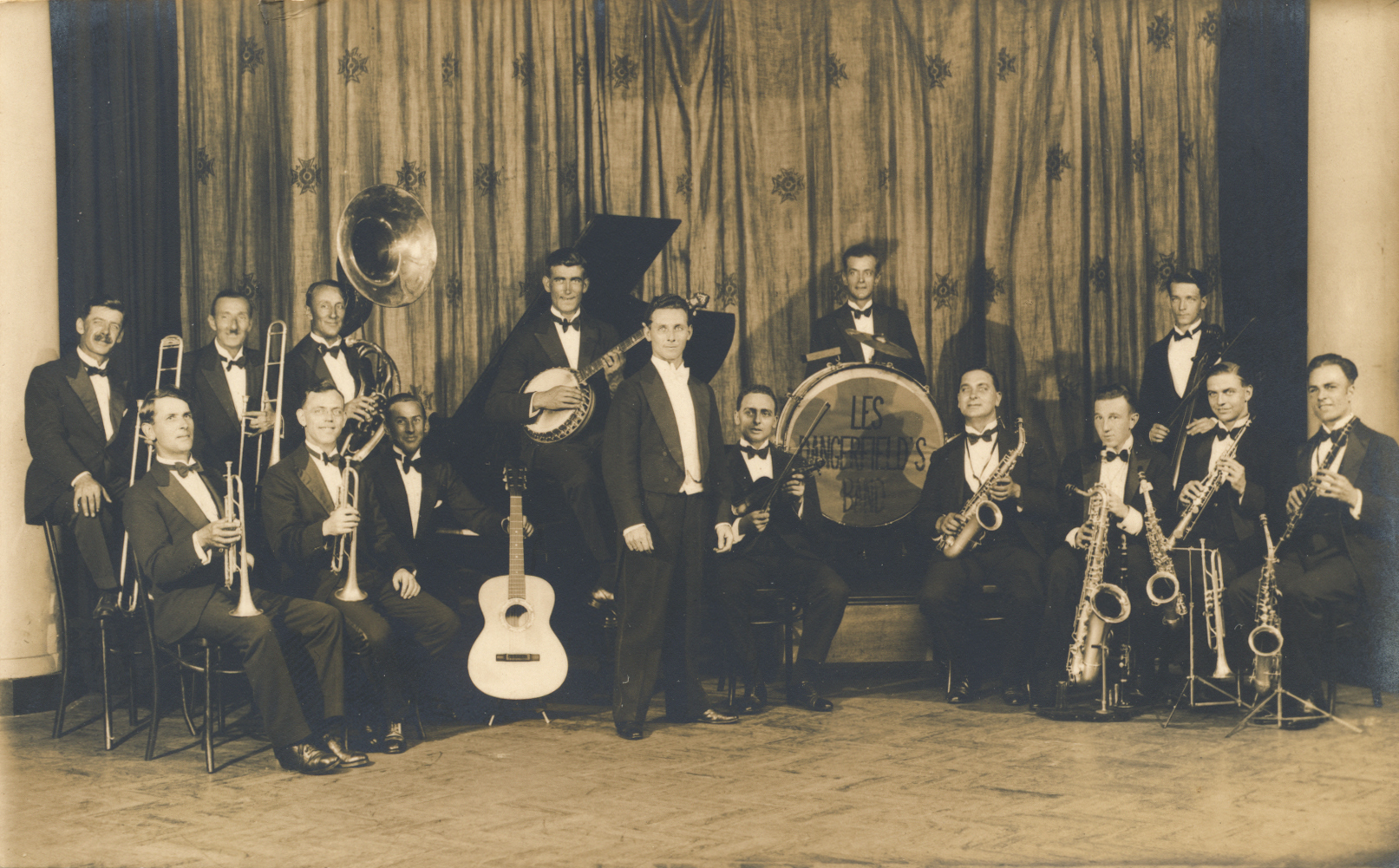 Les Dangerfield is seen now confidently standing at the front of his large ensemble. Presumably he conducted it. With two trombone and four saxophones, it is indeed a large band. It looks as though Percy from the last photo has switched from cornet to trombone. The presence of the banjo and sousaphone (and the absence of a string bass, unless it is laid down out of sight somewhere) would tend to indicate a relatively early date for this photo. Balancing out the large size of the band against the sousaphone, shall we say ~1930 for this image?