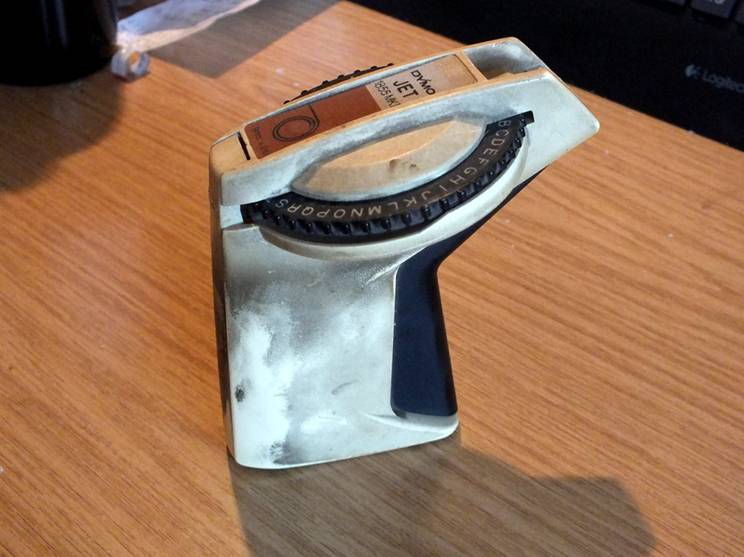 29th April 2015. Oh dear; just look at the deplorable state of my Dymo Jet 1855 Mk.II! I have had it for many years – heaven knows how many. Images of Dymo printers exactly like this one are not too common on-line; one vendor attributed it to the 1960s – surely too long ago? I don’t say Dymo machines did not exist in the 1960s, but I probably didn’t get this one until the 1980s. Still, ‘the eighties’ is a long time ago now. Of course, there had been precursors of the Dymo. On larger railway stations there used to be big red cast-iron machines that would – with any luck – emboss a label of your choice on a thin metal strip. You put a penny in the slot, and swung around a large brass pointer to the letter you wanted, then pulled a lever, and the letter was supposed to be punched into the strip. You carried on until the number of characters you had been allotted (I don’t know how this was done) were used, then you stopped, and pulled the lever in, which severed your portion of the strip. This then came out through a chute. It was never as long as I thought it would be, and many of the characters were superimposed on each other. This was actually because the machine was worn out, like nearly everything else in the immediate post-World War II Era. But as a kid, I always dreamed of an immaculately-embossed strip appearing, one day.

That Dymo 1855 you see above, has probably saved my life; possibly more than once. It came about like this. In the 1980s, I was once working on my amateur radio transmitter. This used valves, and had a power supply of nearly 500 Volts DC. In order to make an adjustment, I unplugged it from the mains. Note: I did not just switch it off; to be on the safe side, I actually unplugged it. I waited about 20 seconds, because during this time the voltage latent in the smoothing condensers – sorry, capacitors – would be exhausted via the bleeder resistor. A bleeder resistor is – was – a heavy duty resistor which was fixed across the main power supply, and served two functions. 1. Since it drew a relatively high current, it would help stabilise the voltage. 2. When the power was turned off, the smoothing capacitors would quite soon lose their charge through the bleeder resistor, rendering the unit safe to work on.

I proceeded to do so, and received a severe electric shock! Aiee! What could possibly have happened? Simple. I had NOT unplugged the transmitter. Inadvertently, I had unplugged the soldering iron, which had the same type of plug as the transmitter. The 500 Volts DC was still there, and I grabbed hold of it. Aargh.

Result? Ever since then, I have labelled every plug in my workshop & radio shack, so that you can see which one you are unplugging. I had just acquired my Dymo, and it was ideal for that purpose. This very morning, I bought a cheap heat gun and a small hot glue gun for use with my various hobbies. Here are the plugs: 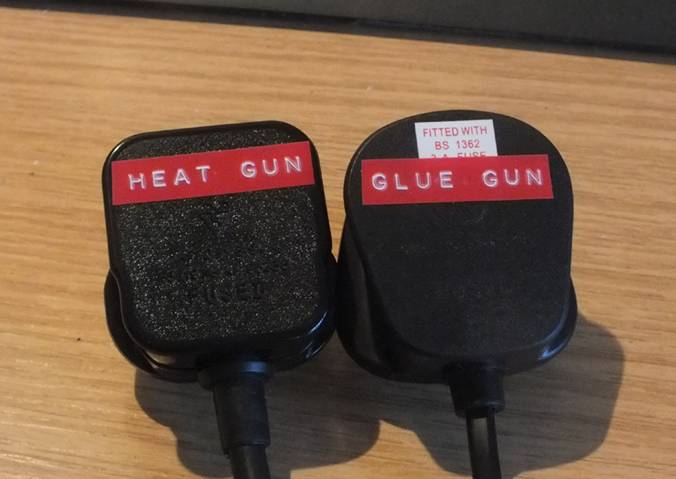 So, I will know which one I have unplugged. I know that some people deride the Health & Safety movement; but in the end, it makes a lot of sense and actually has saved many lives. Though of course, like many other things, it can be carried to excess.

Before returning to the Dymo machine, we would like to add one further comment on the ‘Bleeder Resistor’ we mentioned above. Later in the 1980s, we had obtained, at mind-boggling expense, a Yeasu FT-101Z amateur radio transceiver. After a few years, a track on the Printed Circuit Board blew, because we had done something wrong. It was a simple fault, and easily to be remedied. We just had to solder a short wire bridge over the break, and remember not to repeat our previous error that had caused the overload. We unplugged the transceiver, and went away to get something to eat. Returning after forty minutes, we assumed that the voltage present in the smoothing capacitors would have long since leaked away through the bleeder resistor, and began to repair the PCB. Yet again, we received a severe electric shock! This transceiver, seemingly, had no bleeder resistor. Indeed, after recovering from our loss of dignity (and thanking our lucky stars that we had survived yet another electric shock), we measured the voltage present in the High Tension circuit. It was still somewhat over 500 volts. The full HT voltage, IIRC, was over 700 volts. So, after being unplugged for 40 minutes, the residual voltage in the smoothing capacitors had only declined from 700 volts to 500 volts. This is at once (a) a tribute to the efficiency of 1980s electrolytic capacitors; (b) a possible indictment on Yeasu for not incorporating a bleeder resistor; and (c) YOU CAN NEVER BE TOO CAREFUL when dangerous voltages are – or may be – present.

To conclude on a happier note, we finally had to obtain some more strip for ourDymo. This Dymo uses 9mm strip, and 3 rolls were obtained quite cheaply on eBay. The last roll had been grey, so we celebrated by inserting the new red roll. But alas! The results were smudgy & ill-spaced. It reminded me of my childhood efforts on the railway station. Eventually, I wondered if the new roll had expanded & was causing drag on the feed. We opened the handle & removed the new roll. To our surprise, a short length of the old grey tape fell out as well. Aha! Could that have been the trouble? Might it have been jammed in the embossing mechanism? We re-rolled the red tape smaller, and tried again. But the results were blurred, as before. Aaargh! Well; the machine had probably just worn out? But no; a further attempt caused a very small length of grey tape to appear along with the red. It was that piece that had been jamming up the works. Once that was got rid of, the machine worked as well as ever. Hooray for Dymo!

So: make sure there aren’t any little bits of old tape stuck in your Dymo. As a final test, we printed the following:

So, even if the Dymo is 30-odd years old, it’s still working very well. Oh: the Proverb? It’s one of my favourites, and translates something like ‘A man is never less alone, than when he is by himself’ – that sort of thing. I’ve always assumed it means that the absence of external distractions is conducive to constructive thought. Over the last couple of years, I’ve come up with some really constructive ideas early in the morning, sitting up in bed drinking coffee and smoking my first cigarette, and thinking about what I really need to do on this new day. Colin Wilson, in his book ‘The Occult’ (1971), referred to ‘The Triviality of Everydayness’ – a most efficient phrase. This Triviality of Everydayness overlays and suppresses our capacity for abstract, creative thought. Such thoughts were impossible, when we had to get up in the night, feed babies, change nappies, get the other kids off to school, then go & slave in an office for hours, then pick up the kids, &c., &c. By the time we had a brief leisure period in the late evening, we were too tired to bother about Abstract Thought. And for most of us, this continued for many years. It is only now, in retirement, that I have come to really enjoy & relish the privilege of indulging in Abstract Thought. I don’t claim to have come up with anything significant; but quite often, I am impelled to jump out of bed & rush to the PC to look something up. For example, do you know that the U.S. State of Wyoming is approximately the size of the British Isles, yet has a population of only about 600,000? And that its state capital, Cheyenne, also the largest town in the State, has a population of only 91,000? The British Isles contains nearly fifty million – 50,000,000 people! Is that scary, or what? Should I emigrate to Wyoming? Surely, there must be great scope for Abstract Thought there?

Gosh! All this rambling, just because of a Dymo…

So we have cleaned it & restored it to a nearly-new state, as a little tribute to the thinking it has induced. Ta-raah! 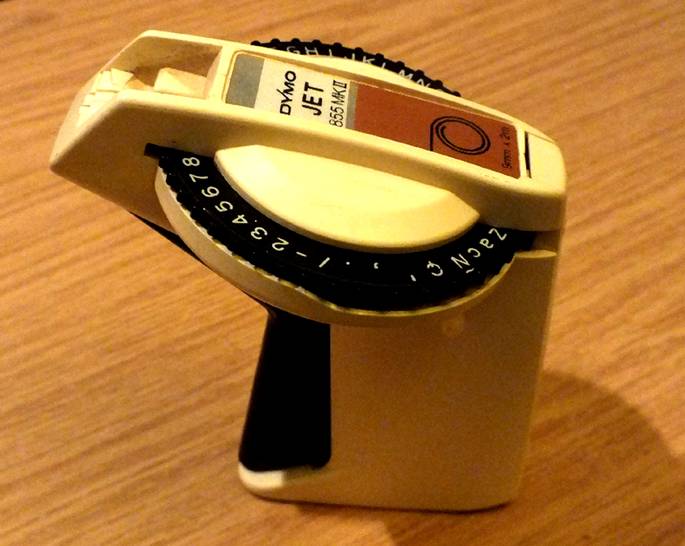