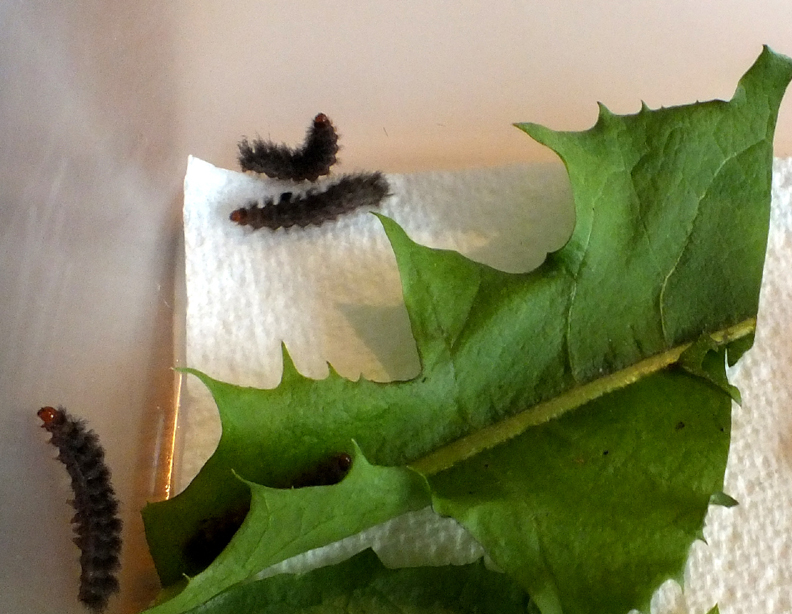 Can this be the first entry in this diary for over six months? Yes it can be, and is. A deplorable state of affairs, for which we apologise. After an appallingly long winter and a cool spring, we yearned to get out into the natural world, and see moths and butterflies again. Actually, we ended up doing the opposite, by importing a couple of species to our modest house. One was exotic: several larvæ of a small North African tiger moth, Amata mogadorensis.

They were extremely active, and if one removed the lid, they would climb up the plastic box & reach out, questingly. As you can see, dandelion was the food plant, though lettuce is apparently equally acceptable. As we had not got into gardening mode at that time, we had abundance of dandelion! Surprisingly quickly, they grew & produced quite small pink pupæ, which soon darkened to various shades of brown. There were plenty of images of mogadorensis on line, and many statements as to the ease with which they can be reared (this proved to be the case); but precious little about their wingspan. So I thought had reared a ‘dwarf race’, in view of the modest pupal size. Eventually, we found a French website which made it clear that they actually are relatively small. 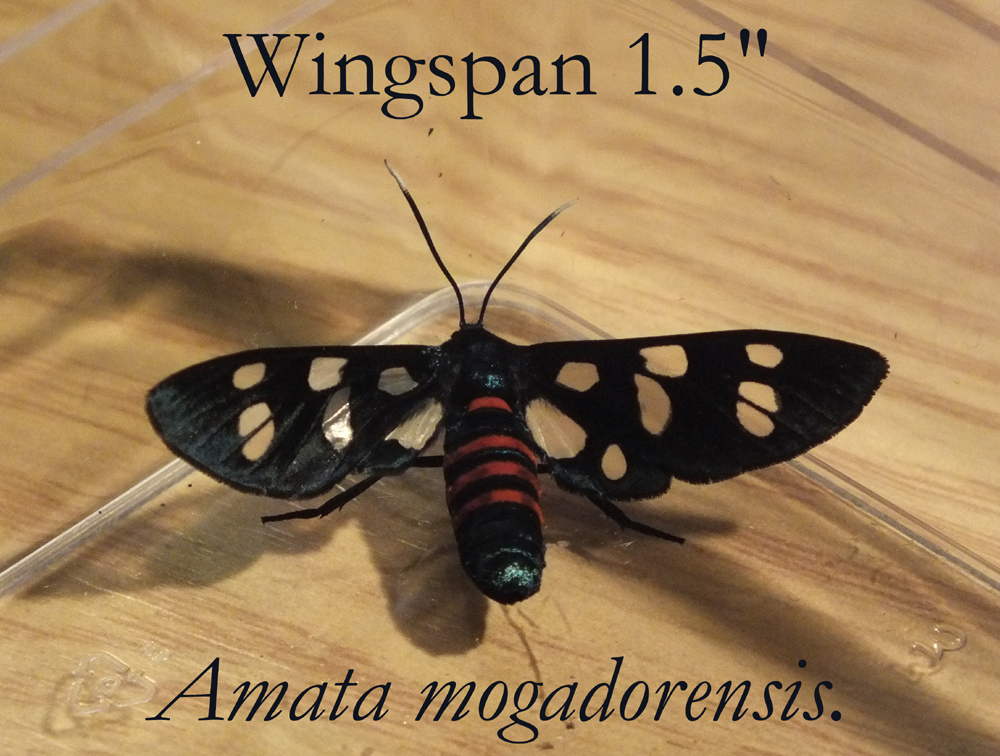 They were jolly little caterpillars, and jolly little moths too. Within a few hours of their emergence, they were busy mating, even without food. We did provide some cotton buds soaked in honey & water, which they obviously enjoyed. The very next day, the first egg cluster (100 or so, neatly arranged) appeared on the gauze of the plastic cage. More were emerging, and two other pairs were already in copula, as they used to say in the old entomological books. It was at this point that we became slightly apprehensive. What would happen if it all continued as easily as this? A population of 10 or 12 larvæ was OK; but if each female laid 100 eggs, and we made more boxes & put in more dandelion, the result in a couple of months could be literally a thousand individuals, even if their gene pool was rather depleted. And the more there are, the more likely an accidental escape might occur. Indeed, while photographing one moth, it began to fly – which is, after all, only natural! – and was only with some difficulty restrained & put back in the box. To introduce a totally alien species into these already ecologically-ravaged islands would be a crime of unspeakable magnitude – especially a species whose fecundity was extremely obvious and most impressive. A Fundamental Decision was required. Sadly, we consigned all the individuals to one large plastic box, ventilated with gauze, and laid it aside in a corner of the spare room. A fortnight later, we examined it, and found a great deal of tiny frass. Eggs had obviously hatched, and the determined micro-larvæ had eaten dessicated – nay, petrified! – dandelion leaves, that any other self-respecting caterpillar would have totally ignored, and expired stoically. I’m not saying that scores or hundreds of mogadorensis larvæ have not already been discarded outside in our British gardens. It’s just that I didn’t want to be the one that might have made it work. 8^) 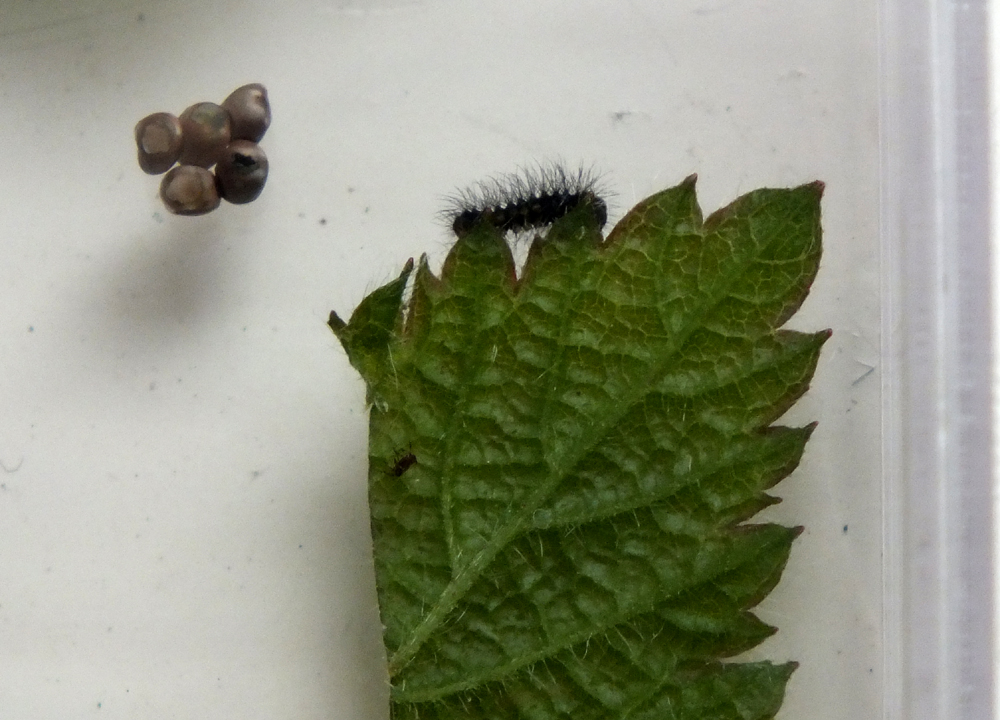 The other species we essayed was the Emperor Moth, Saturnia pavonia. This was more familiar, as we reared this species with some success back in the 1980s on Hawthorn IIRC. Above is a healthy infant investigating a bramble leaf, with its nearby eggshell. Its siblings have not yet hatched. 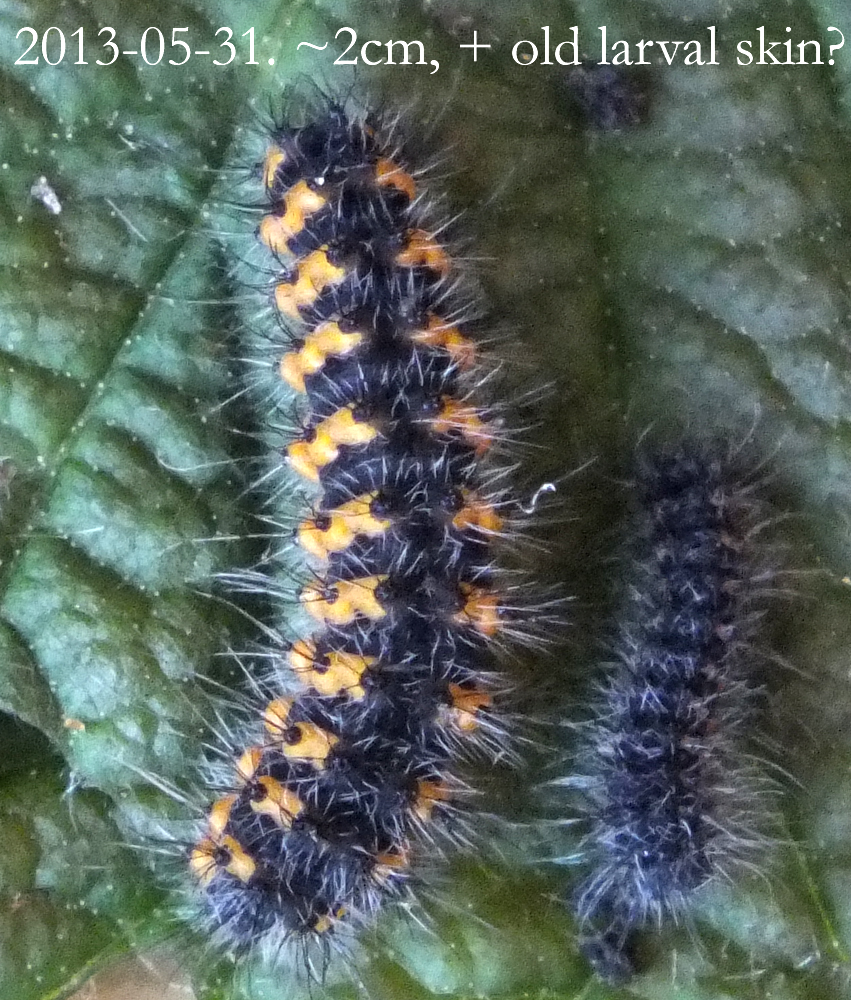 Here is one later. I always get muddled with the instars… might this be the third? 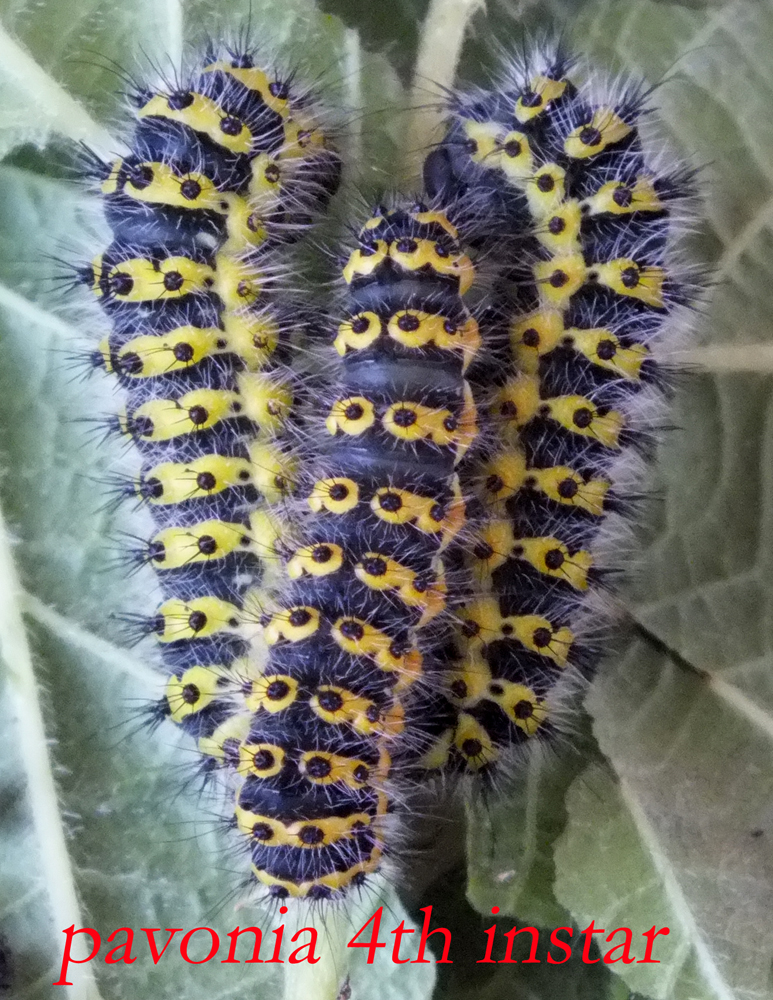 Or maybe it’s the fourth? Later, they were all given their own boxes. 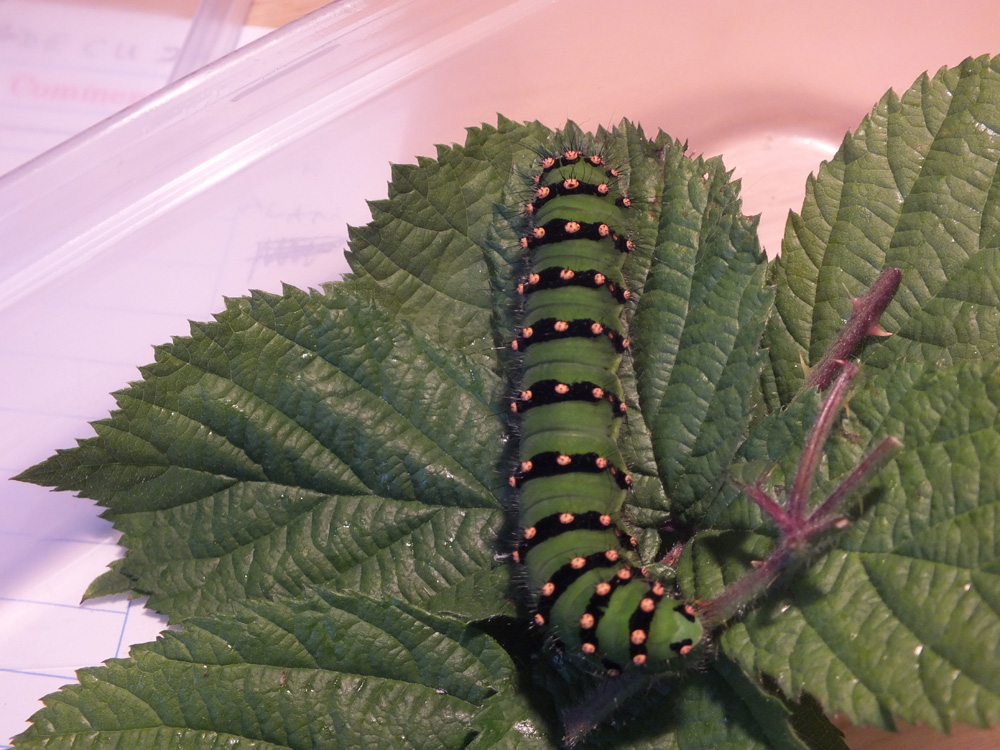 Here is a full grown larva. I’m afraid we lost most of the others, but thought the two left would stand a good chance of forming healthy pupæ. Alas, this is apparently not the case. Both showed signs of imminent pupation: cessation of eating, and some slightly liquid frass. So we put them in a ventilated box with abundance of bramble, in a quiet place out of sunlight of course. One just gradually shriveled up, and the other one disappeared. So I’m afraid our abilities as a rearer of lepidopterous larvæ are not of a very high order these days. Unless the one that disappeared, actually did pupate? 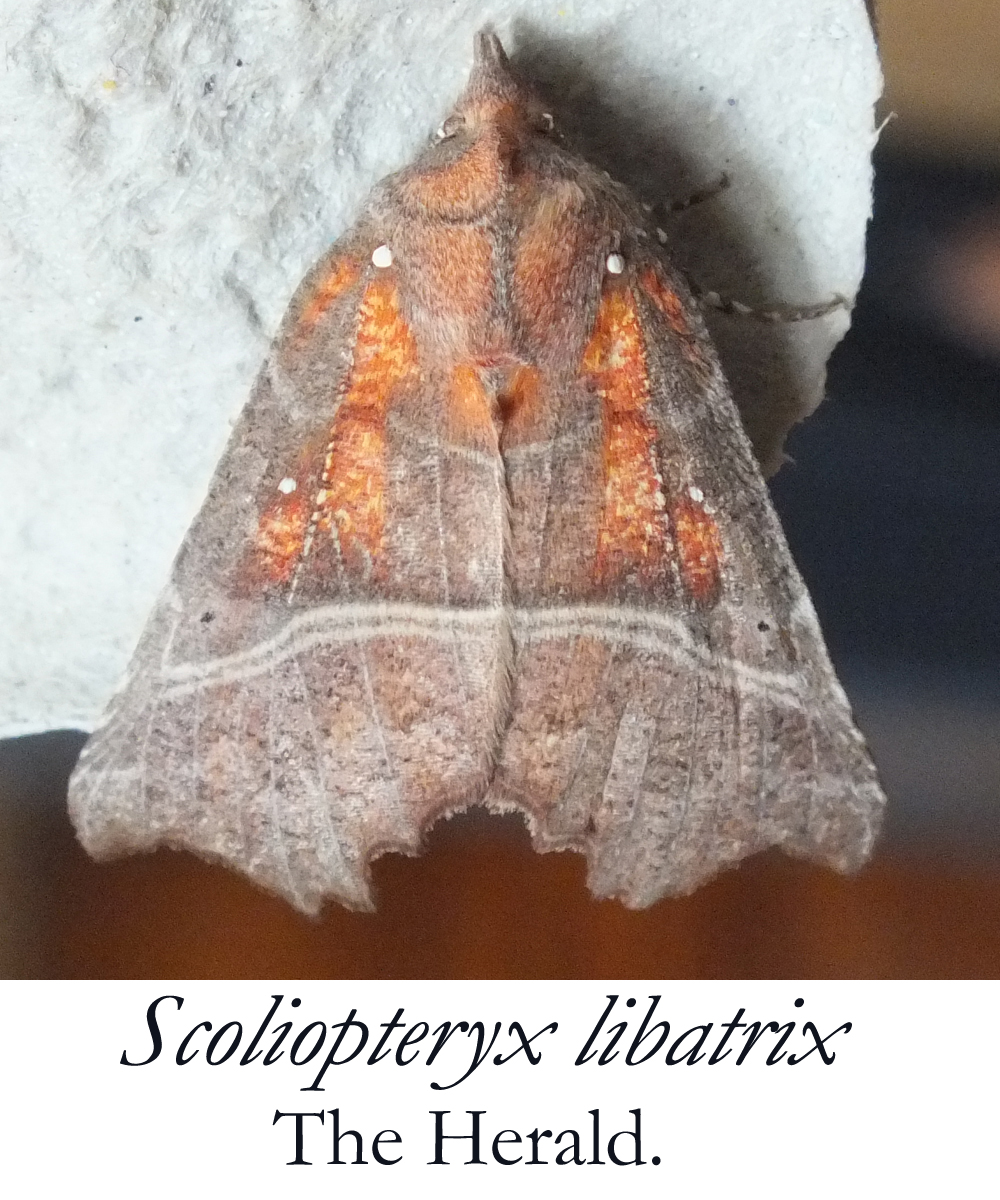 Besides this, we made a primitive moth trap, which usually ended up with an inch of water in the bottom, and no moths. It had a low-power UV bulb in it, and eventually produced a few specimens which we could identify. The Herald appeared on the 27th May, and who can blame it, in view of the late season? 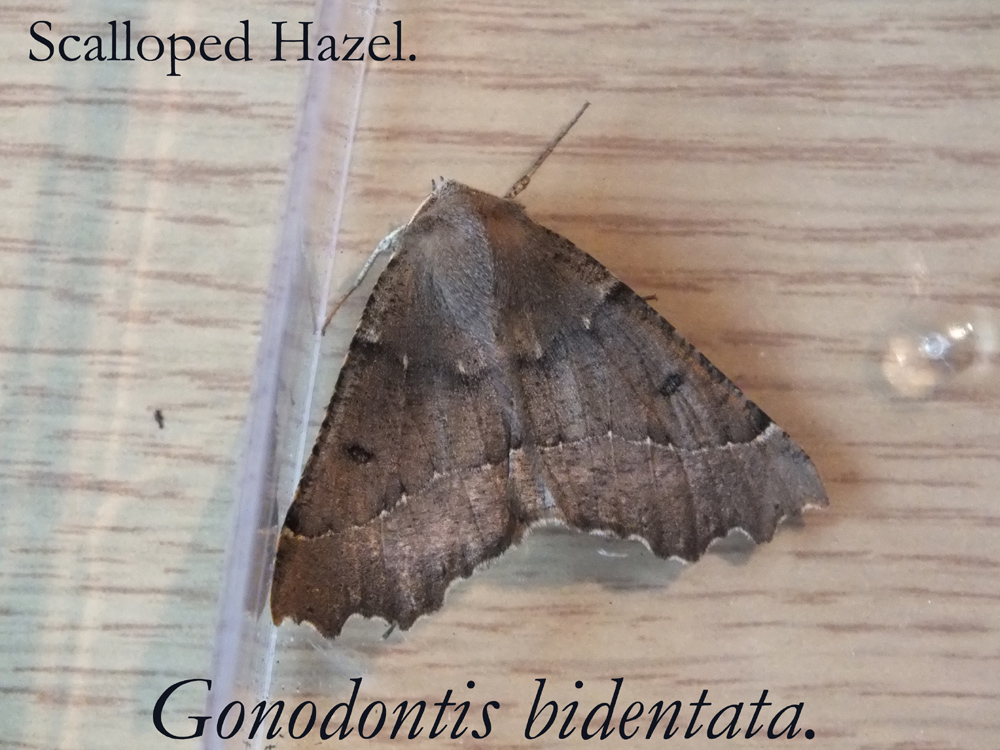 The 8th of June saw the Scalloped Hazel – we’re fairly confident with this ID. Actually, what we do is photograph the moth and then leaf through South until we find something that looks like it, & take it from there. It’s not very scientific, but its good fun when it works! I wonder if we would do better by using Stainton’s Manual from the 1850s? We have a battered, unmatched pair of volumes, which were quite inexpensive. Incidentally, greatly daring, we recently edited the Wikipedia article on Henry Stainton. It was sort-of OK, but implied that because he was very wealthy, he only dealt with things on the ‘Grand Level’, visiting other famous entomologists in different European countries, &c. The article never mentioned his democratic side, whereby he held weekly ‘open evenings’ at his house, where anyone (over the age of 14) could freely come, no matter what their background or social status, to have specimens identified, learn more about entomology, meet other enthusiasts & thus possibly become recruits to the science &c. This, we added to the article. 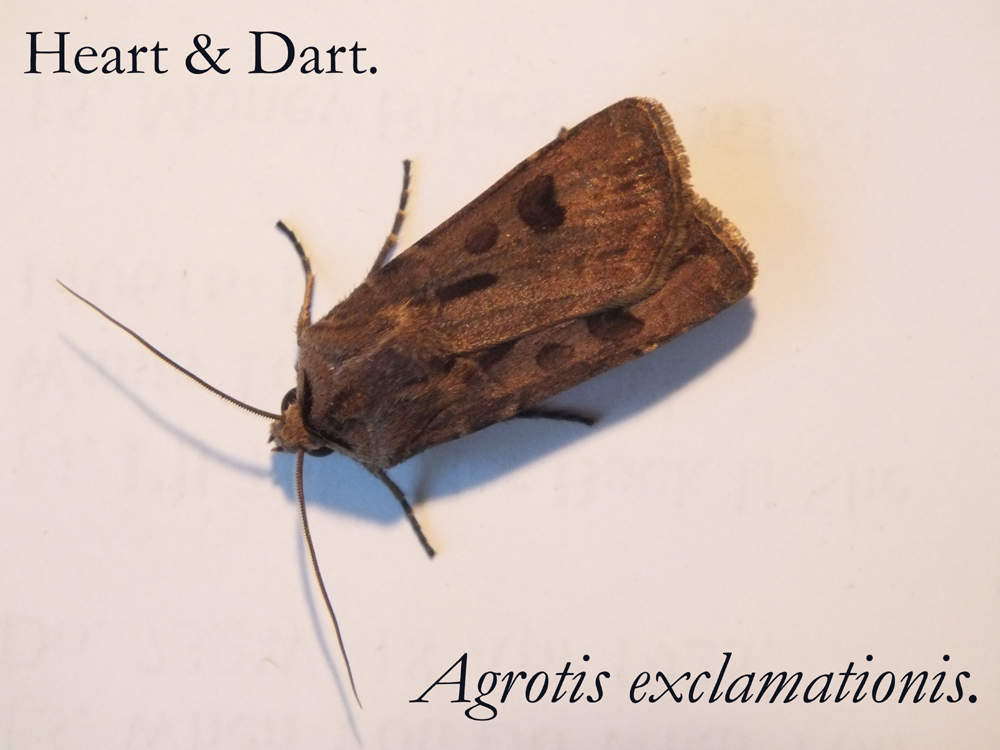 19th June brought the ubiquitous Heart & Dart – for this moth must surely be that species? 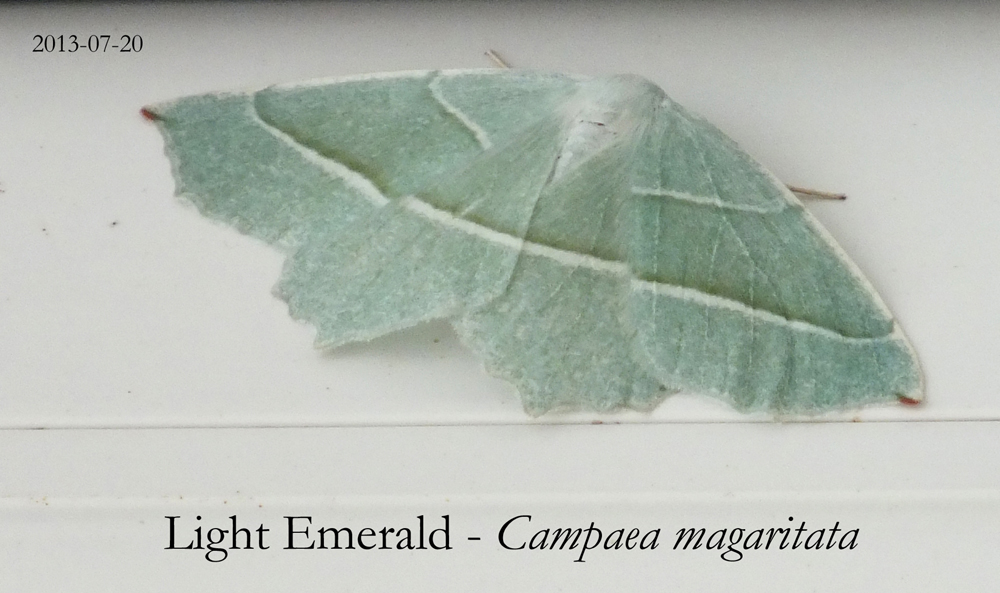 A month later, during the heat-wave, the Light Emerald flew out of the trap and settled on the undignified plastic frame of the sun room. Still, the identification is positive. So! Out into the July heat-wave, and to the nearby Rowley Hills Nature Reserve, for it has a colony of the Marbled White butterfly. A rather northern habitat for this species, it seems. There were plenty of them about, but were not too successful in shooting any of them. We should have gone there much earlier while they were still ‘warming up’. 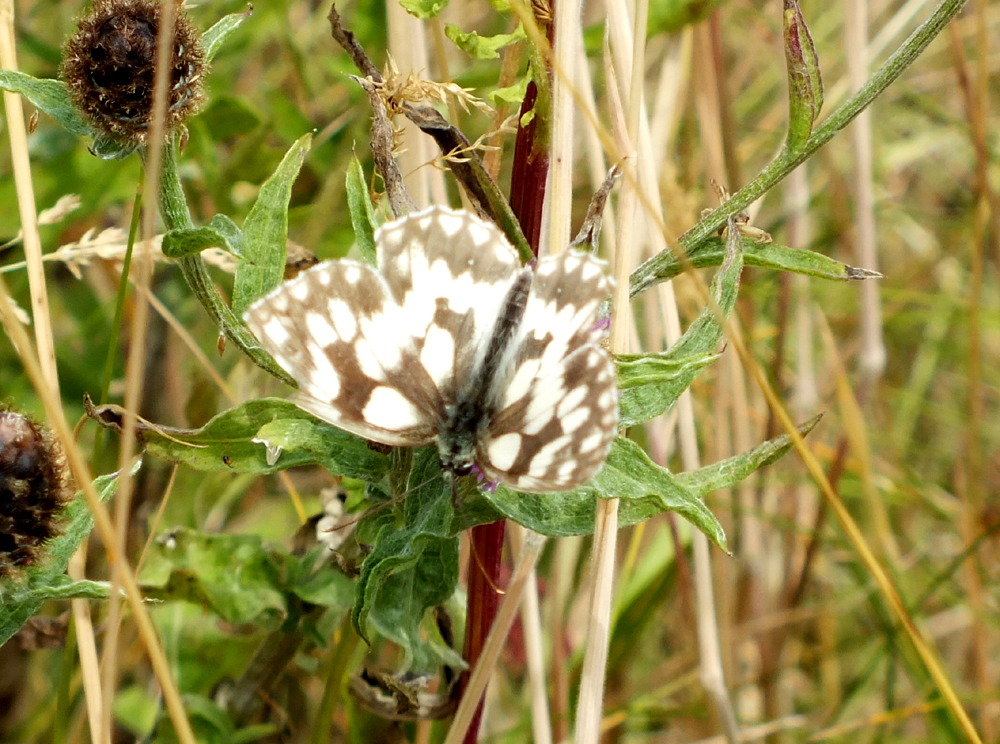 Incidentally, this was a new species to us, so it was quite exciting when we first saw them. They were in abundance, and their relationship to the ‘browns’ rather than the ‘whites’ was immediately obvious, simply by their flight. They ‘potter about’, as does the Meadow Brown – and though they potter rather more efficiently than Maniola jurtina, their power of flight is much exceeded by the ordinary large & small whites, who, by comparison, soar loftily above them unconcernedly. 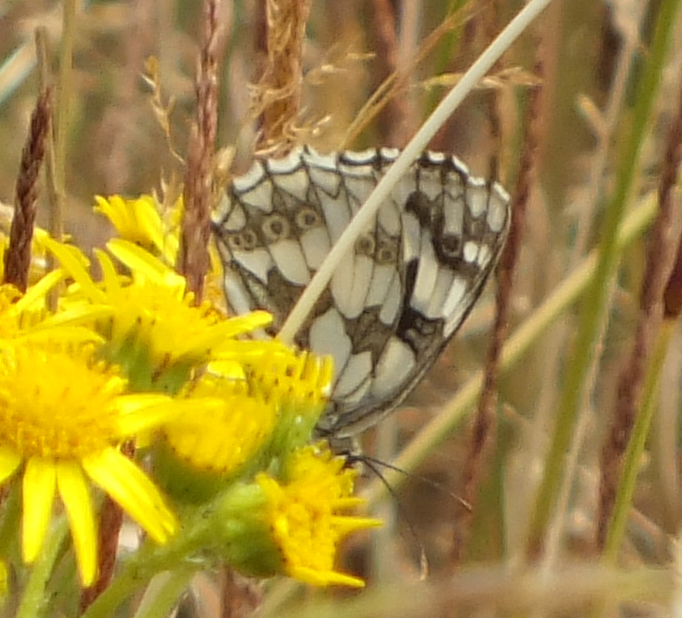 This was the only underside shot we obtained. Still, honour was satisfied; we went to see Melanargia galathea for the first time, and we did so. What more can be expected? In addition, brownish individuals seem to be females, and darker ones males; so perhaps we have even got one of each? 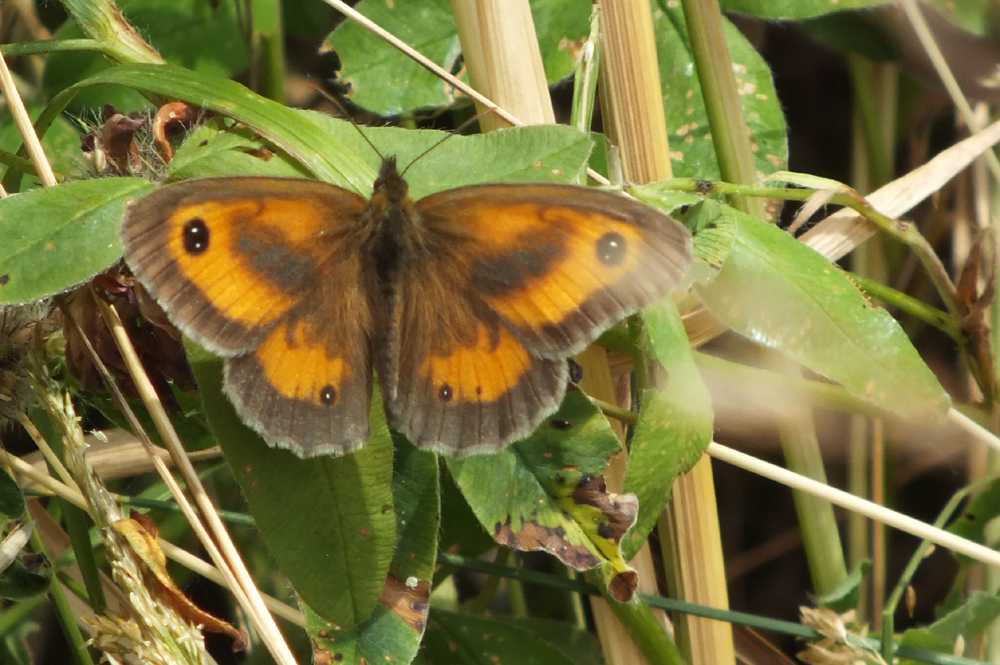 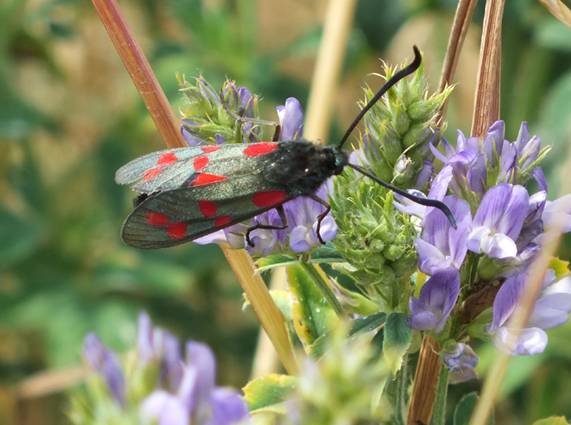 But the most spectacular and abundant insect in evidence this afternoon was undoubtedly the Burnet Moth – presumably the six-spot, Zygaena filipendulae? They were everywhere, in vast abundance. Their cocoons adorned hundreds, nay, doubtless thousands, of grass stems, always near the top. See for yourself: 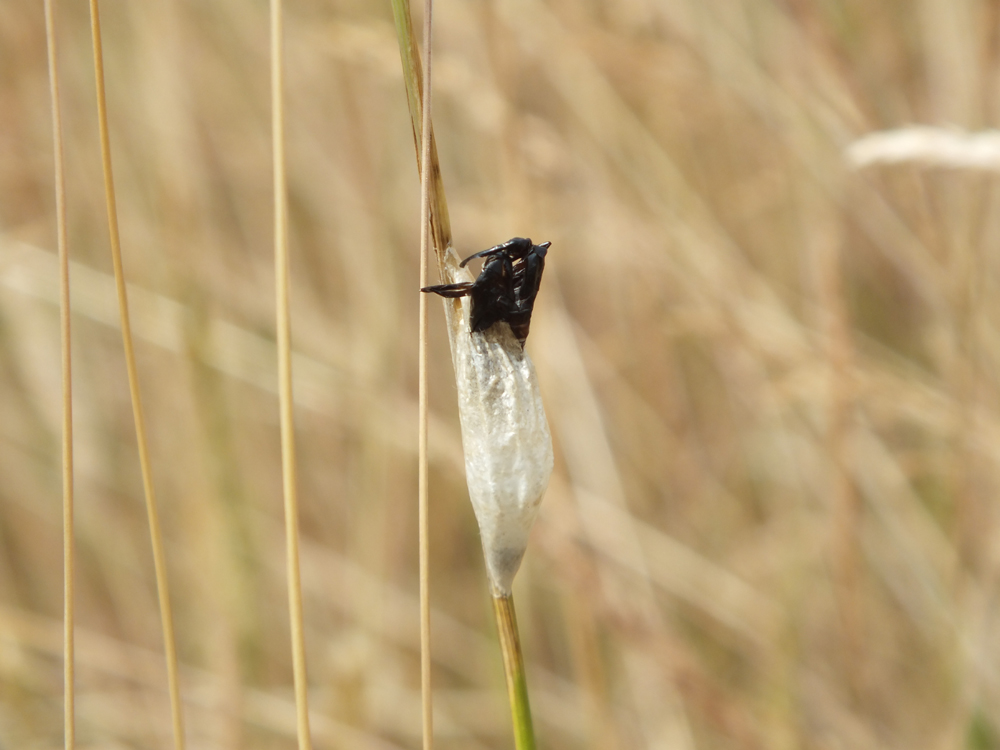 A cocoon of filipendulae, with the pupal case left behind. The fact that these moths spin their cocoons so insolently visible near the top of long grass stems, must indicate that (a) the pupating larvæ are immune to motion sickness when the grass is blown about by the wind, but more importantly, (b) that they are distasteful to predators, on account of the larval food-plant containing alkaloids or whatever – which odour must suffuse the cocoon itself? And also, the imagines; which are brightly coloured, and fly in the day-time? 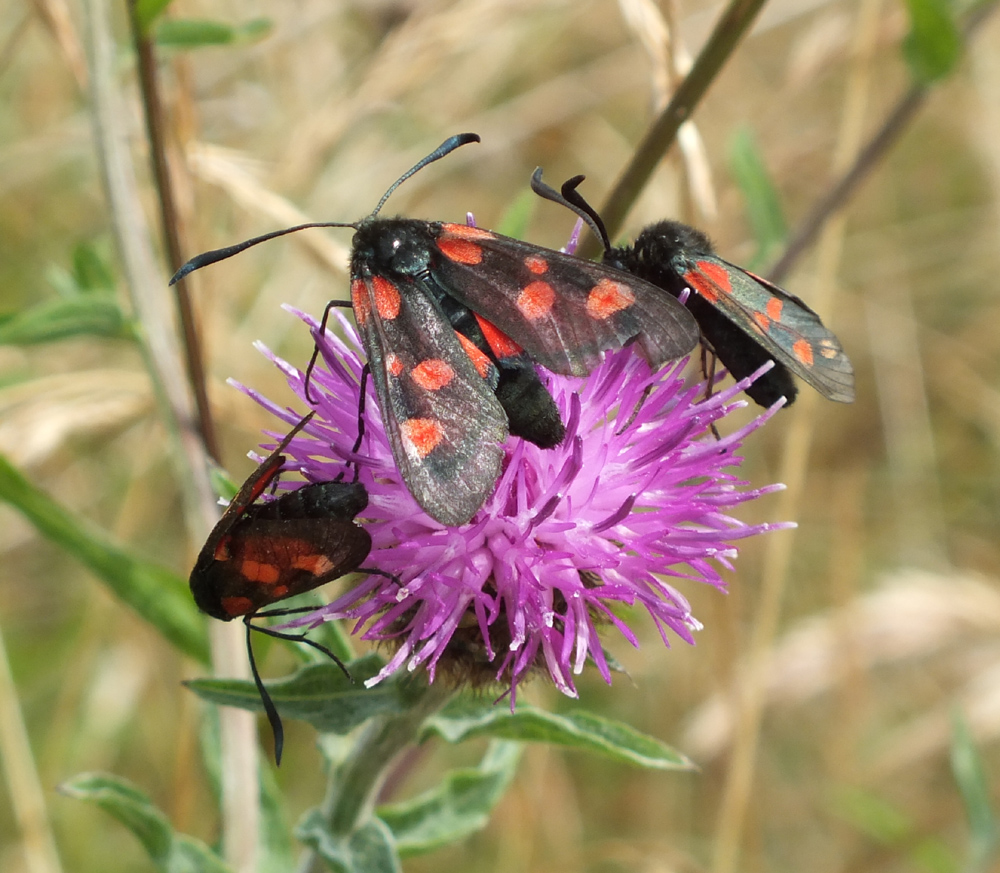 Here are more, on thistle heads. They are often said to be rather sedentary, but today, presumably because of 27°C, they seemed to be pretty active. 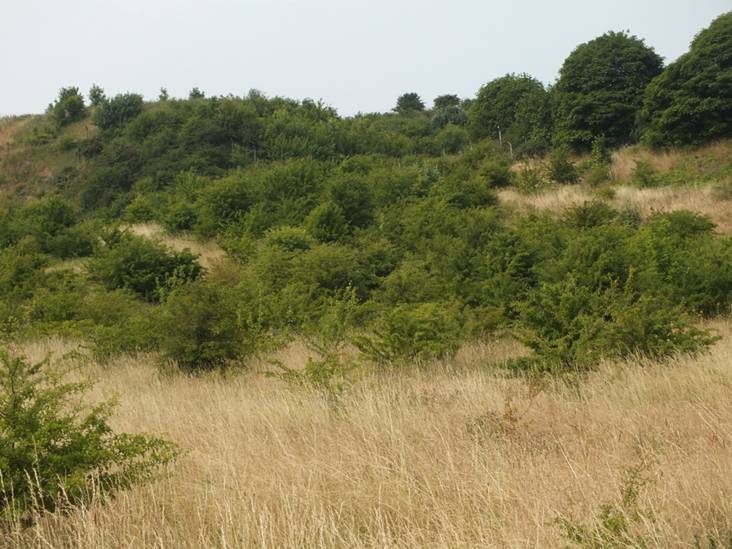 This is the terrain in which these insects were seen today. It’s an LNR (Local Nature Reserve) of very recent origin – part of the Rowley Hills, recently acquired by the BBC – that’s the Birmingham & Black Country Wildlife Trust, not ‘The Beeb’. 8^) We previously visited this site, which is abandoned mine-workings, and is still totally surrounded by industry and intense urban settlement, in January 2012. See link here later. We must come back more often…