Historical data taken from “Harborne – A History”, Edward Chitham. Phillimore & Co. Ltd., Chichester, 2004.
Further information from the website of the Victoria & Albert Museum, with grateful acknowledgements to both. 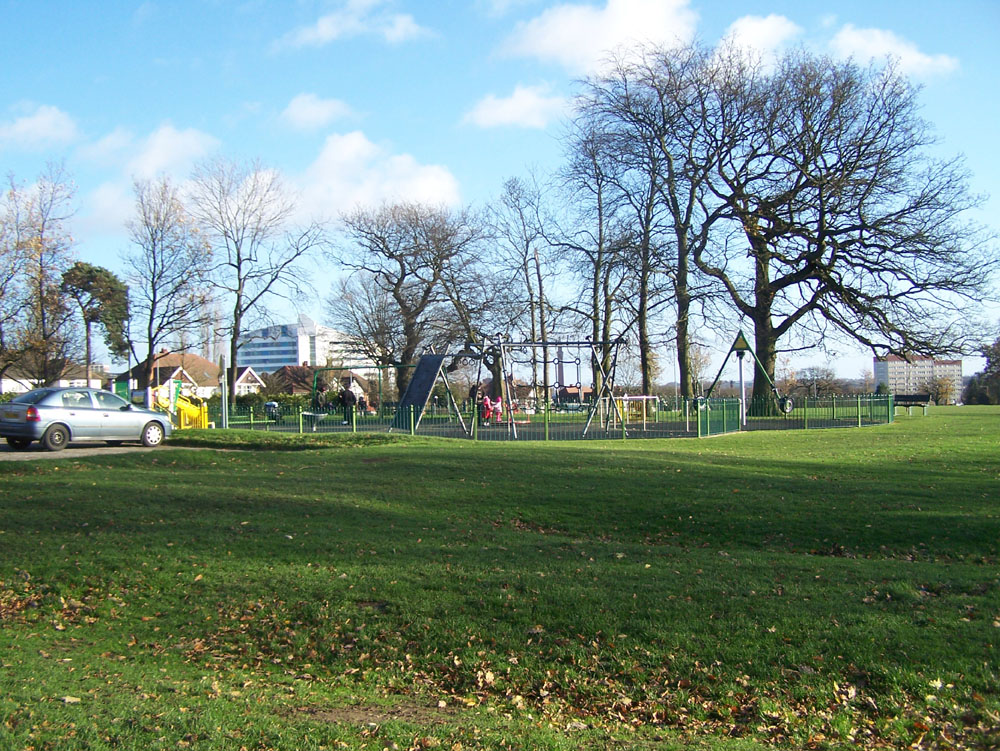 3rd December 2011. A short walk in the Grove Park. This was, substantially, the garden and grounds of a large house, ‘The Grove’, of which more anon. When my 2 children were young, we used to go there frequently: for fresh air, flying kites, small rubber-powered model ’planes, football, cricket, all the traditional things to do in an open space, including of course, feeding the ducks! Actually, the Grove Park had more open space 25 years ago than it has now. Many trees have been planted lately; so if you haven’t seen the park recently, you may be surprised. This is the play area next to the car park, and so may perhaps be described as the functional and therefore the most ‘ordinary’ bit of its 12 acres. Against the sky, left of centre, is part of the great new extension of the Queen Elizabeth Hospital. 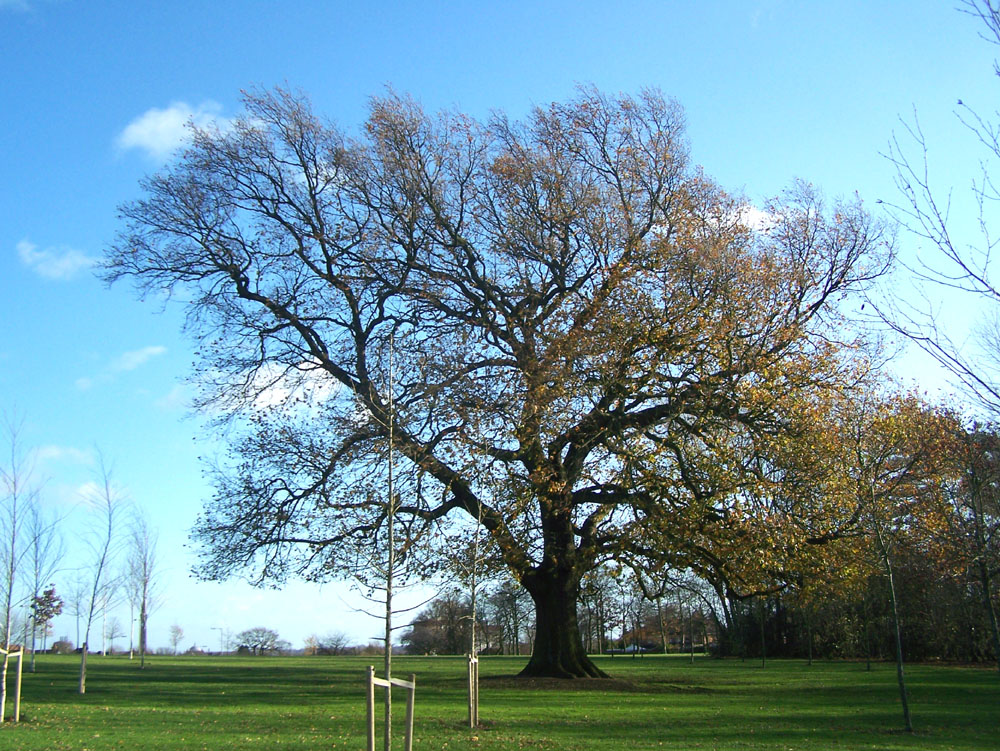 Turning to our right, we see the big oak tree. This was naturally a ‘magnet’ for kites & model ’planes! 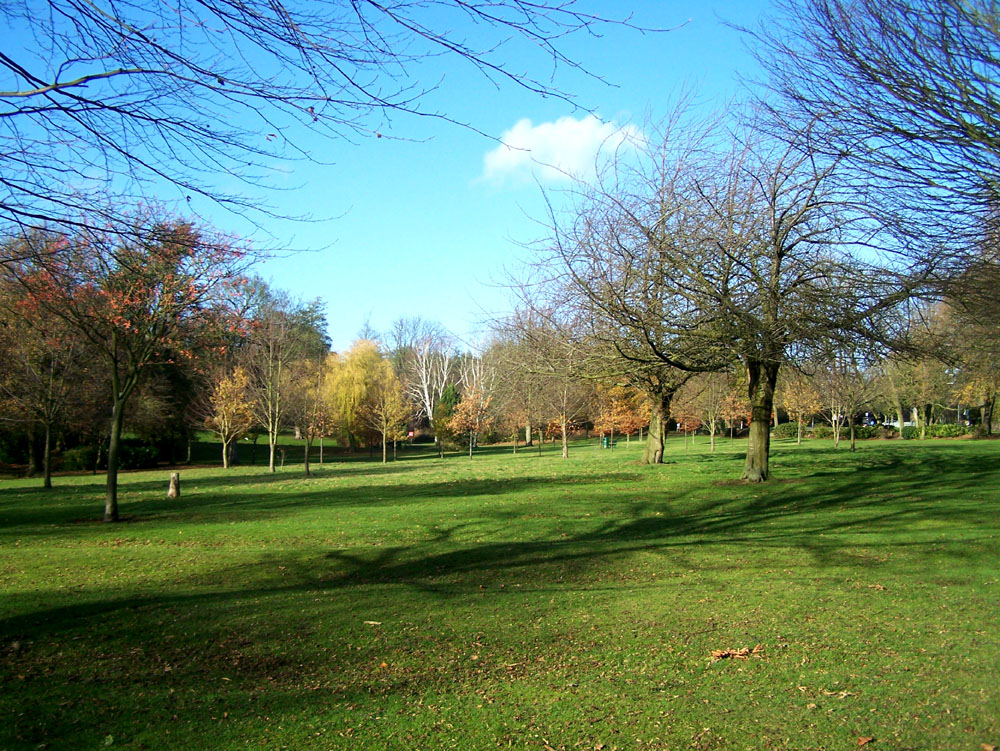 Turning through 180°, we look towards the pond, and to where the house used to be – it was, alas, demolished in 1963. The pond is on the right, on the higher ground. Not sure when ‘The Grove’ was built; but it was famous as the home, from 1823 to 1846, of Thomas Attwood. Attwood came from a few miles away in Halesowen, and prospered as a banker. But he is better known for his crusade for Electoral Reform, being involved in the Birmingham Political Union, which pressed for the city’s representation in Parliament. When this was finally successful, Birmingham was given two MPs, one of whom was, of course, Attwood. 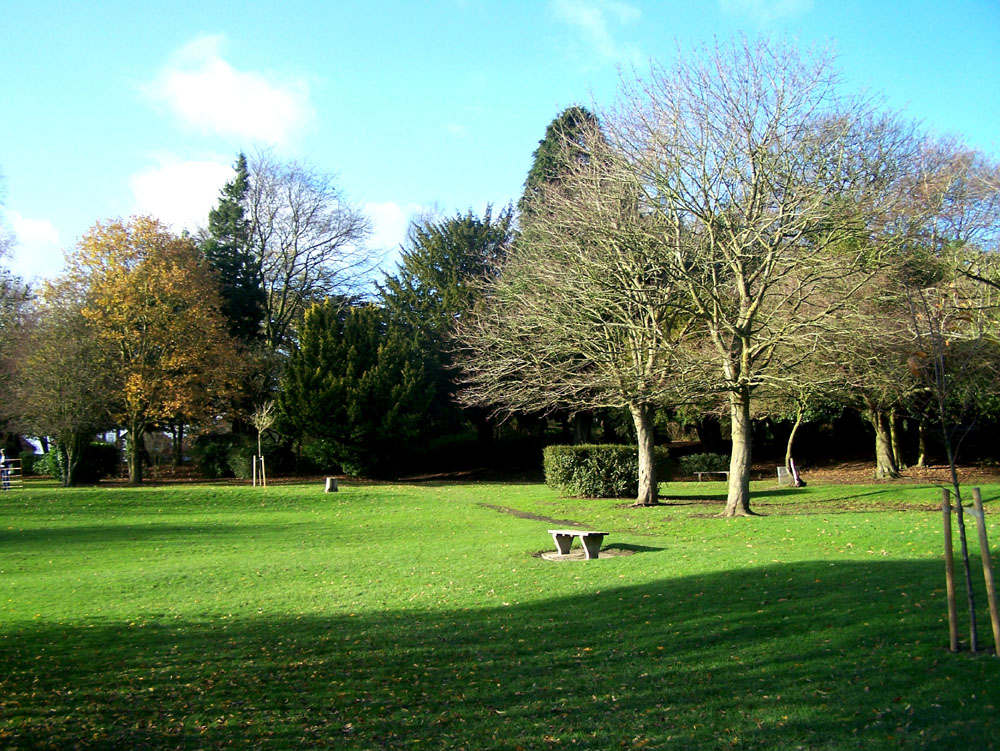 This is nearer the southern end of the park. 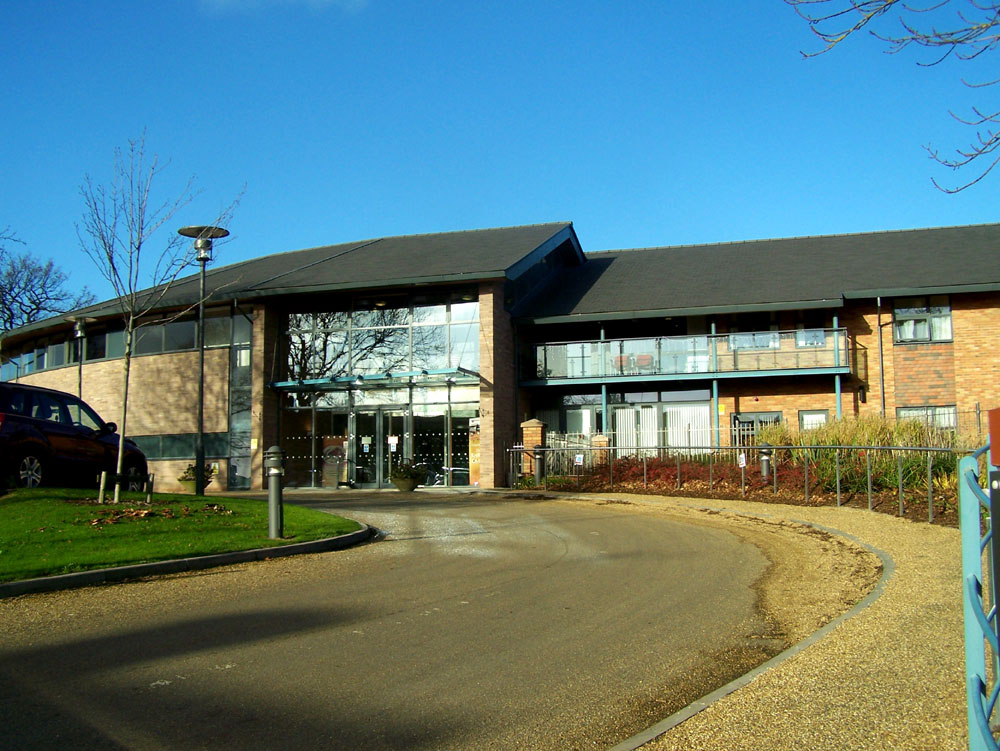 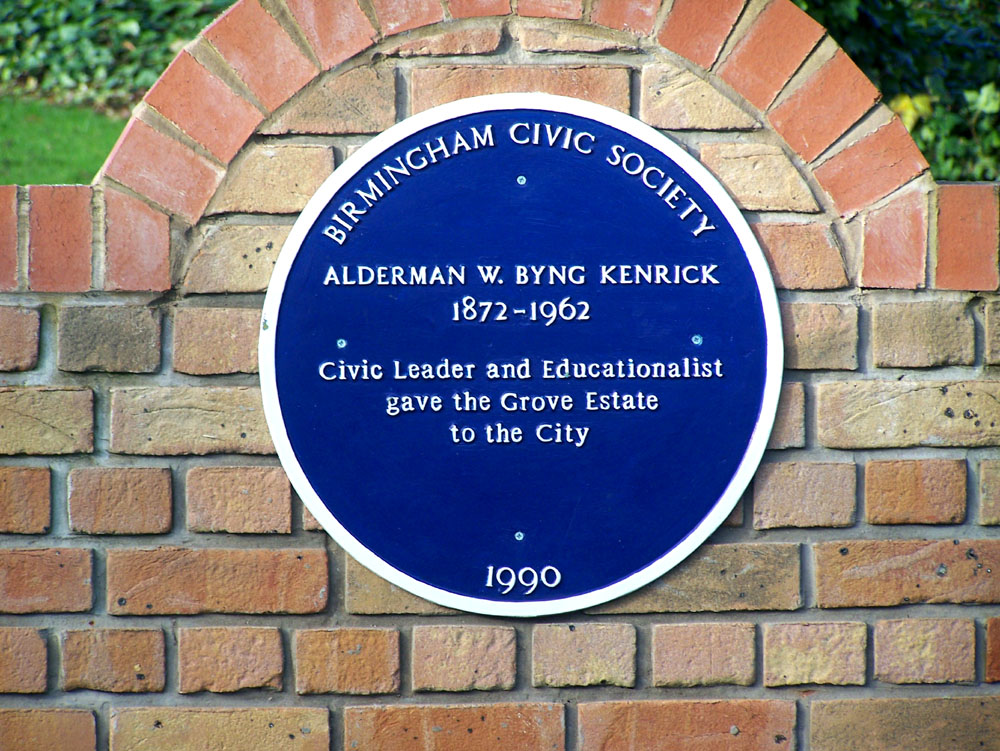 At the south-eastern corner of the Park is a newly built Care Centre. The plaque explains the donor of the Park, and why it is called The Kenrick Centre. 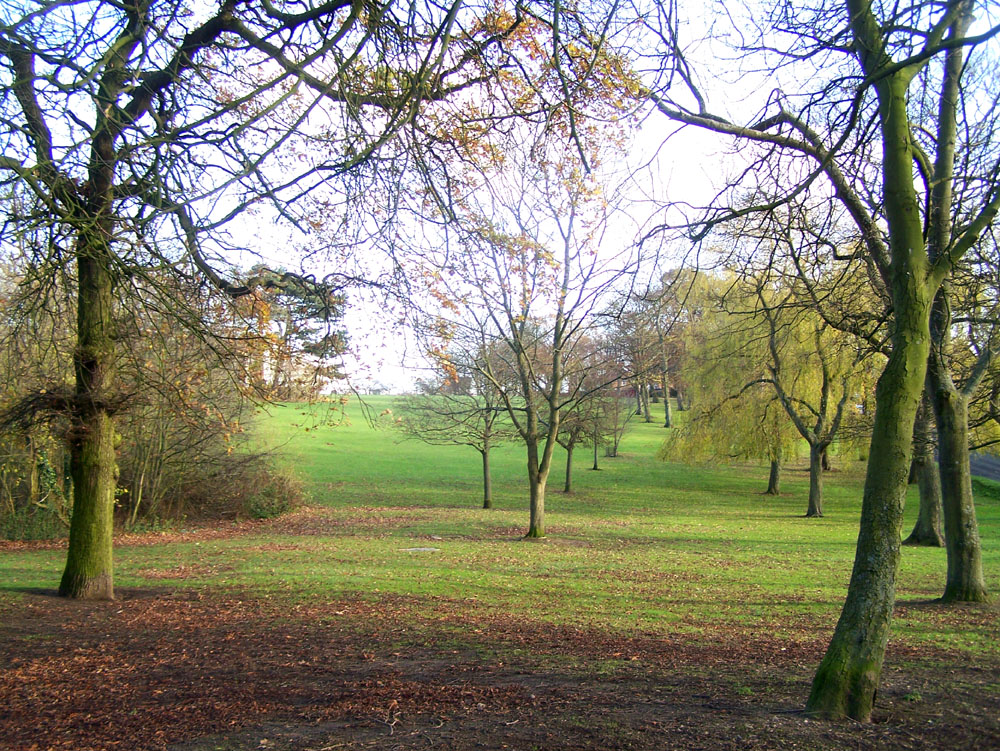 Southern boundary, looking east. Mill Farm Road is just visible at the right. The Mill referred to is most likely the old Harborne Water Mill, situated on the Bourne Brook, the ancient boundary between Harborne and Selly Oak, which is a few hundred yards to our right. 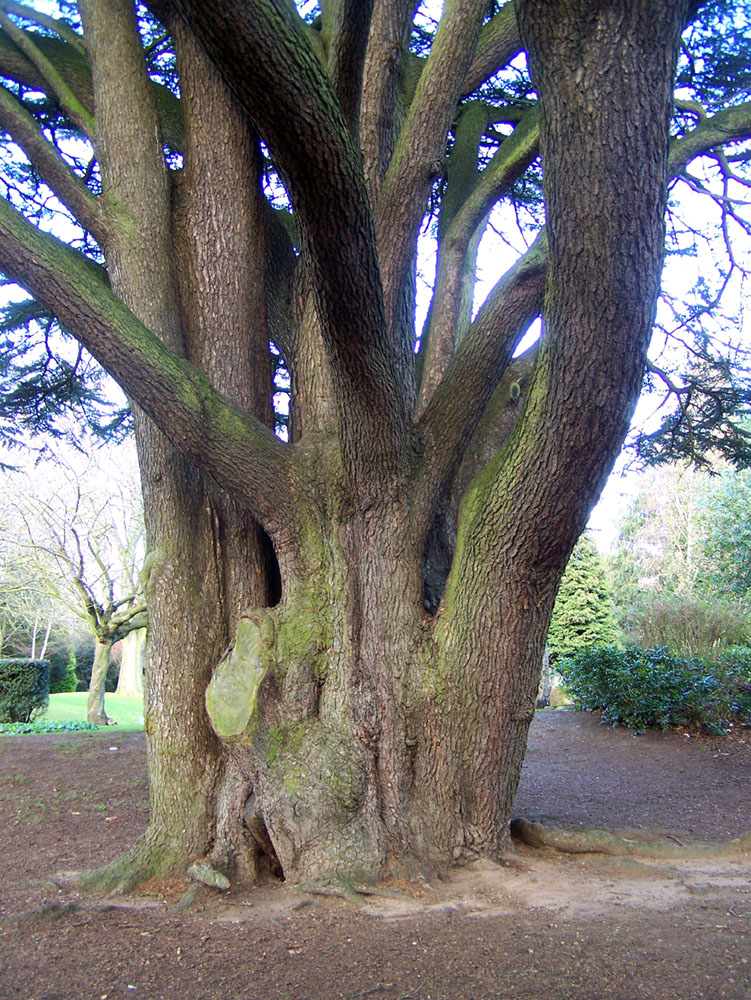 One of the centre-pieces of the Grove has always been the ancient Cedar Tree. When my kids were quite young, I used to lift them up and stand them in the lower crooks. They gradually got used to it! The tree is thought to have been planted around 1785 by Thomas Green, who, having systematically purchased much land in the district, became first the de facto squire of Harborne, and then the actual one, when he bought the Manor of Harborne – which was in 1785. So as Chitham logically implies, the tree was probably planted in commemoration of this. 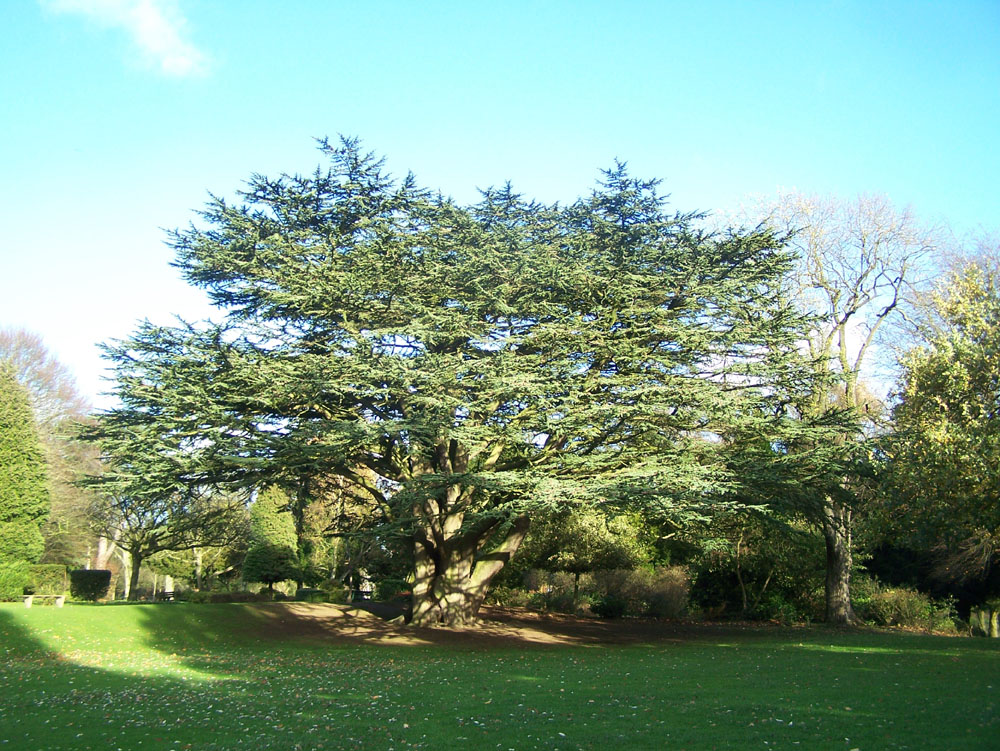 And here is the Cedar in all its refulgence: “limned by the low winter sun, which gilds the azure welkin with its benficient rays…”, and all that sort of thing. 8^) As you will presently see, The Grove stood on the flat bit to the left of the tree. 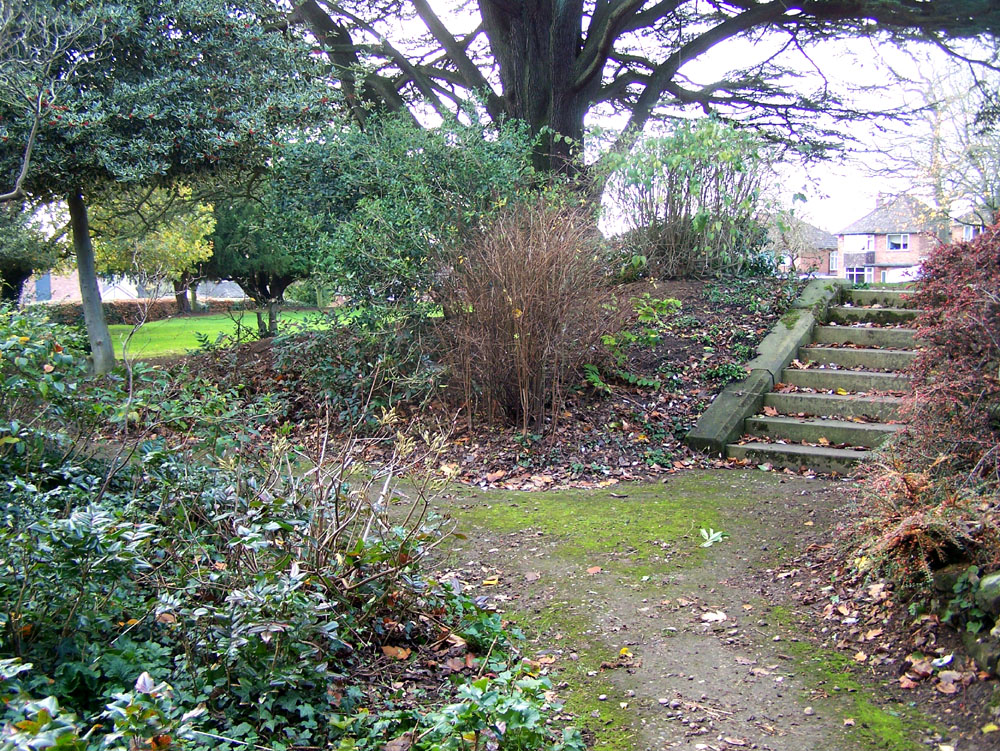 This is undoubtedly a remaining fragment of the original garden close to the house, the steps leading up (and indeed down) between the two levels. 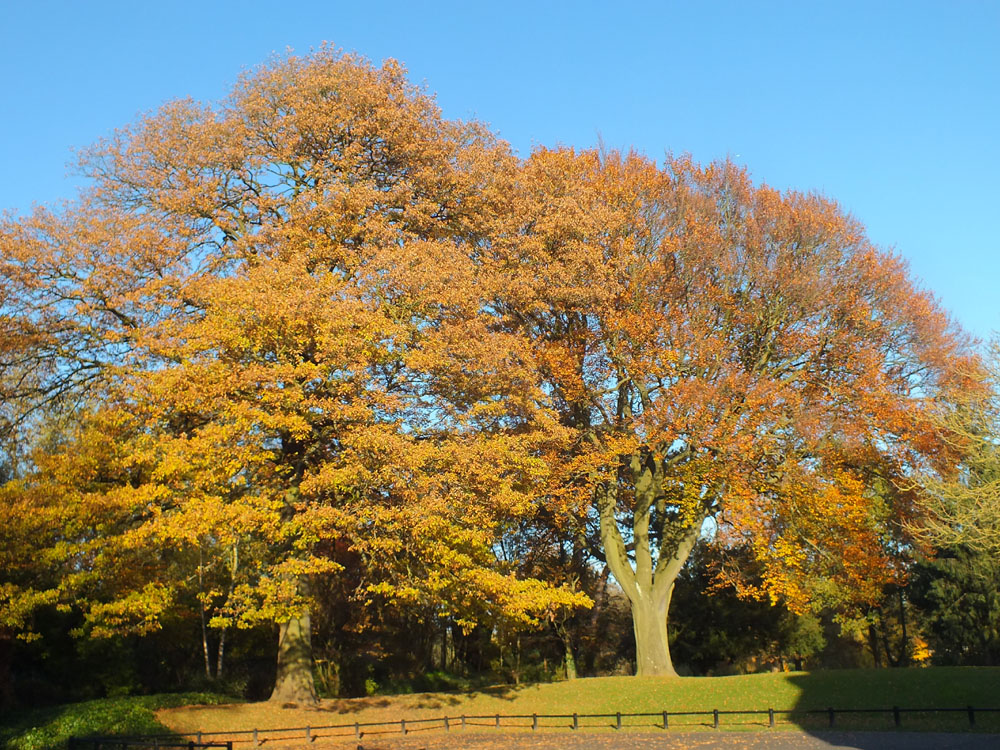 Just to find it a home, here is an Autumn image from The Grove! Year unknown. Pardon the intrusion… 8^) 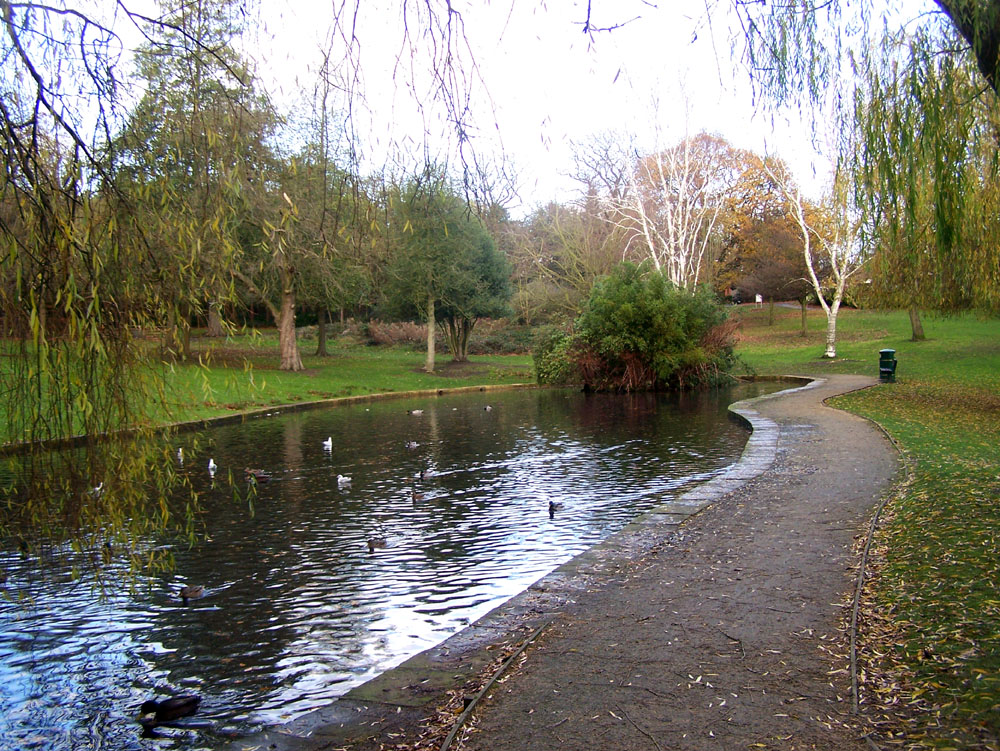 Of course, no big house, still less a now-public park, is complete without a pond. I presume it’s artificial; but there is a tiny, incipient valley – a depression might be a better word – which runs down from this level, right across the park, in the direction of the Bourne Brook. This was always traditionally squelchy in wet weather. Indeed, shrubs and certain trees have been planted in the lower part of the depression, doubtless to take advantage of this wetter environment. Perhaps a little tributary of the Bourne Brook ran down it. Don’t know where the pond’s water supply comes from; perhaps a spring? That would be nice; everybody likes springs, don’t they? Springs have always been pleasantly mysterious, so it’s no wonder that people have regarded them as enchanted, or at least very special, for millennia. Our Celtic ancestors were much given to placing precious, finely-wrought things (chiefly weapons) into springs, ponds and lakes, as gifts to the Presiding Deities, to ensure their sympathy. As you know, a core Arthurian incident has the Gods, seeing the predicament of men, lending one of their own weapons, – Excalibur – to King Uther. Returning the compliment, as it were. This is perhaps my favourite metaphor, or allegory, or whatever it is. Like, people have been chucking rich offerings into water for donkey’s years *, right? But eventually there is a great Crisis in the Affairs of Men (surprise, surprise); so the Lady of the Lake’s arm comes out of the water with Excalibur, and says, in effect: “Look, you can borrow this really great swerd (sorry, sword), & sort things out with it. But when you’ve finished with it, it comes right back here. Is that all right? Good. Off you go then!” To me, this is one of the simplest, most beautiful and symmetrical legends, irresistible in its poignancy. But I digress… More prosaically, the pond supports a surprisingly large population of ducks, there merest few of which appear in the shot. Dragonflies hawk to and fro across it in due season. And besides its macro-life, it naturally has an abundance of tiny life. Daphnia, Cyclops, Bell animalcuæ, formanifera (I think that’s what they are, I’m new at this game), algae & of course lots & lots of diatoms & all sorts of other things. I really must get a photographic attachment for my microscope so that I can bore you with images of some of them. Alas, gentle reader (assuming you’re still there), I do apologise for these rambling asides; but don’t worry, we’ve nearly finished our short tour of the Grove Park. (For miscroscope stuff, click the ‘Nature Study’ tab, then ‘Pond Life.)

* The term ‘Donkey’s Years’ actually has no connection the longevity of the eponymous quadruped. But donkeys do have very long ears, and the original usage was in the form ‘I haven’t seen you for as long as a donkey’s ear.’ It gradually changed into its current form. (Dictionary of Idioms and their Origins. Linda and Roger Flavell. Kyle Cathie Ltd., London1992. Pp 72-3) Moreover, Black country dialect often omits the ‘y’ from the word ‘year’, e.g. ‘Twenty-five ’ear agoo…’; this would facilitate the metamorphosis. Perhaps other dialects do this also? 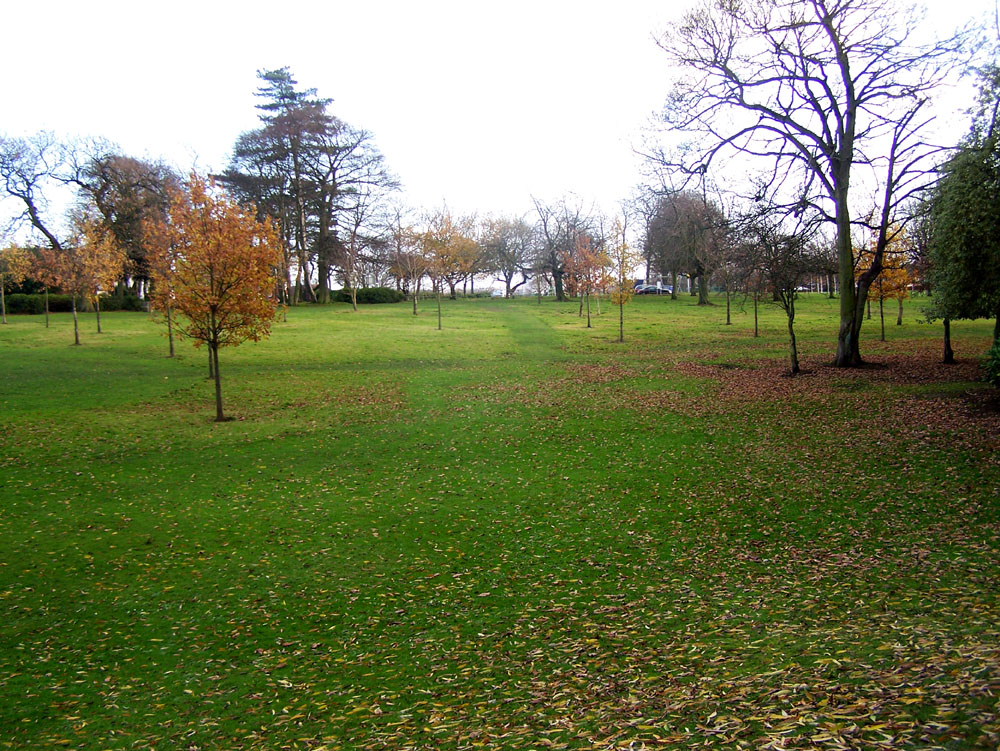 We progress from the pond back up to the car park. But as we leave the site of The Grove, we cannot help wondering: what was the house like? Well, the original house must have been built at a time which surely cannot be after 1785, when Thomas Green is thought to have planted the Cedar? Perhaps he planted the Cedar to commemorate the finishing of the house? I must scour the pages of Edward Chitham’s excellent book more closely. But in any case, the original house was replaced, or perhaps adapted or overlaid by another, designed in 1877-1878 by John Henry Chamberlain. It was built by Samuel Barfield. Happily, there are two images of the house in late 1962, taken on the very day of its sale. The images reside in the collection of the University of Birmingham. There is a thing called ‘Collective Commons’, which seems, if I have interpreted it correctly (which is by no means certain), to allow the use of a copyright photograph for non-commercial purposes, provided due credit is given &c. Therefore, behold the The Grove in the veriest twilight of its existence: 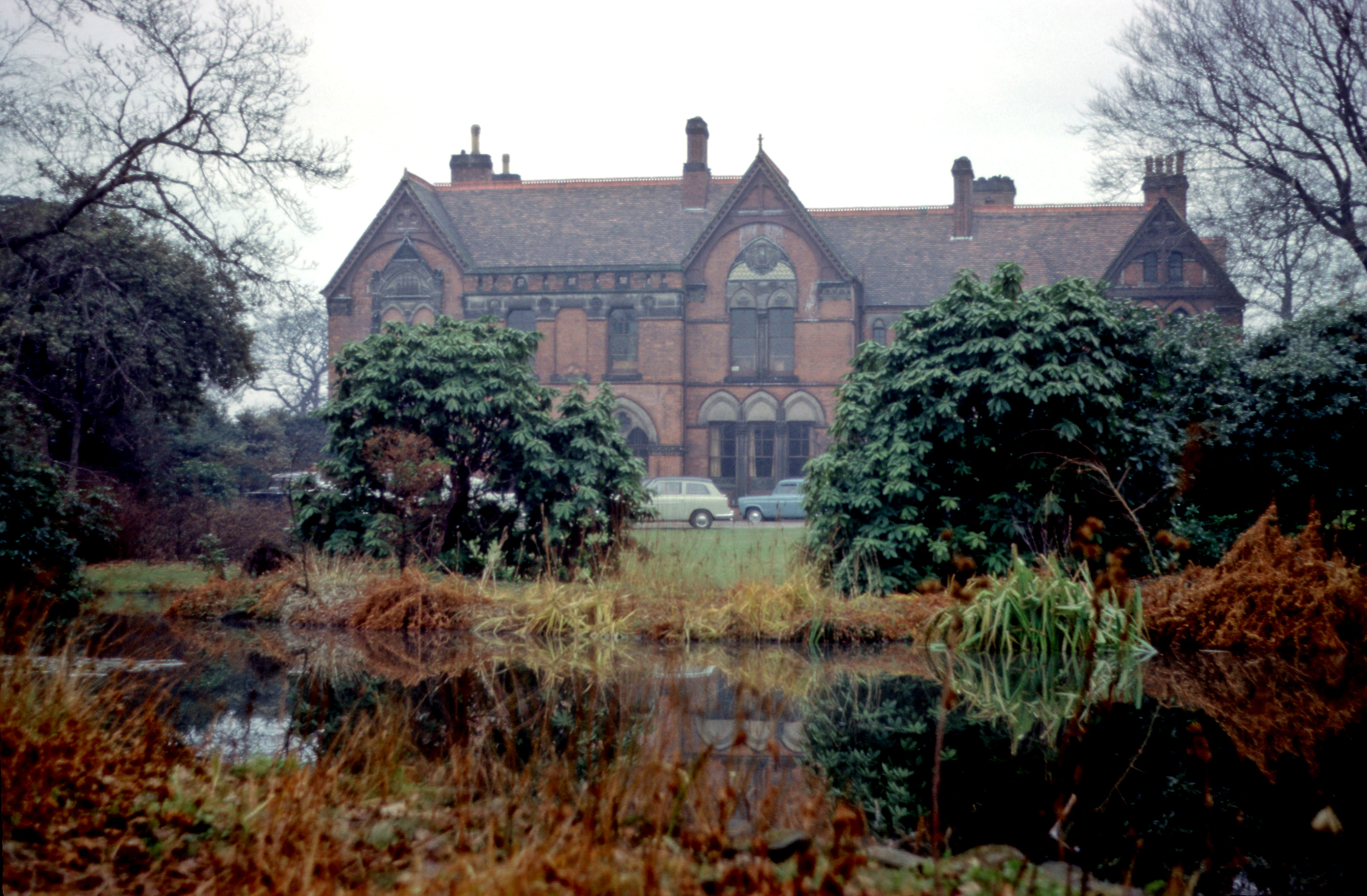 Photograph taken by Phyllis Nicklin in late 1962. This image is © MLA West Midlands and the University of Birmingham. It is used here for non-commercial purposes. There is no implication that the copyright owners have approved of its use here. See http://creativecommons.org/licenses/by-nc-sa/2.5/ for further information, and conditions governing any further use of this image. 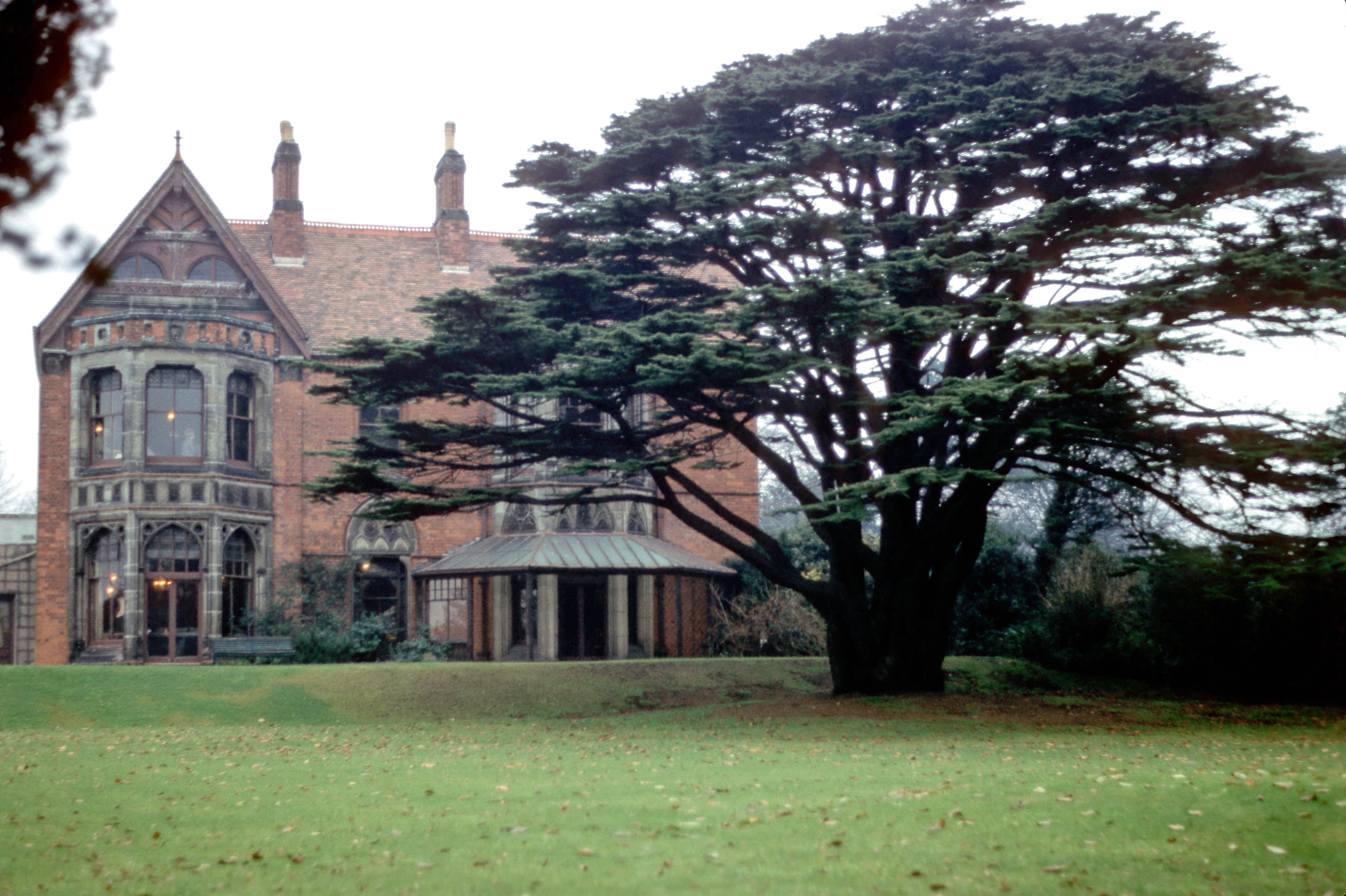 Photograph taken by Phyllis Nicklin in late 1962. This image is © MLA West Midlands and the University of Birmingham. It is used here for non-commercial purposes. There is no implication that the copyright owners have approved of its use here. See http://creativecommons.org/licenses/by-nc-sa/2.5/ for further information, and conditions governing any further use of this image.

So there you have it. It is always sad when a fine old house is knocked down. But I dare say the locals said the same when the original Grove was knocked around into its final form. To be sure, the Victorian “Grove” looks a little daunting, even forbidding? But who are we to ‘back-dictate’ what houses – or anything else for that matter – should have looked like in the past? The general story goes that the City of Birmingham accepted W Byng Kenrick’s philanthropic donation, and rather logically turned the extensive grounds of the house into the nice park we have today. But they couldn’t think of anything to do with the house… so they knocked it down, before it fell into dilapidation & eventually caught fire – a fate shared surprisingly often by redundant and neglected buildings in Birmingham, and doubtless elsewhere. Probably just kids playing around. 8^) But for those unfamiliar with The Grove – as I was until I wrote this page today – there is a pleasant surprise below. 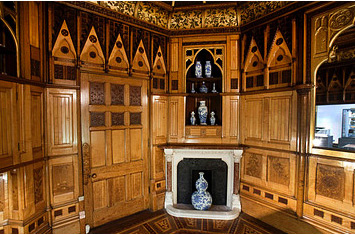 A paneled room of The Grove – an ante-room to the drawing room. It was acquired by the Victoria & Albert Museum prior to the demolition, and may be seen there still. More information on it is at: http://collections.vam.ac.uk/item/O10987/room-panelled-room-from-the-grove/