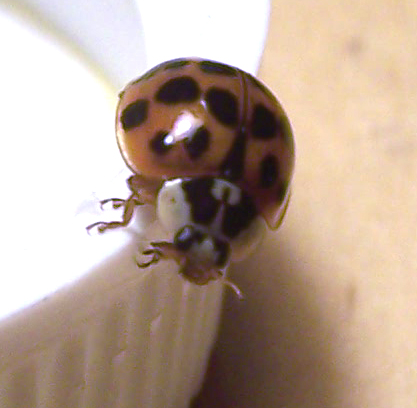 As remarked on the link to this page, I was told a couple of years ago that a highly invasive type of Ladybird had arrived here; but wasn’t very interested in Ladybirds so did not pay much attention. But traveling to a gig in Spring 2008, I stopped at a filling station north of Newbury, Oxfordshire, for a cup of coffee and noticed a Ladybird on top of a fence post. It seemed different; rather larger than usual and had quite a lot of spots, perhaps 14 or 16. It seemed likely to be a Harlequin, but still didn’t bother. Then I saw one in my house in Birmingham a few weeks ago that looked like a harlequin. It was on the outside of the sun-room and would have been difficult to photograph. Today, with my brother at our ‘local’ for lunch, I went outside to smoke a cigarette (aaarrgh!), and saw many Ladybirds flying about. The weather was mild, though it had been quite cool during recent nights, down to 3°C. They looked as though they might have been seeking a place to hibernate. They landed on the wall, then mooched about, or just stayed still. Of course, the usual amateur entomologist would be resourcefully equipped with all the impedimenta of his calling – but I am not a proper amateur entomologist. Still, a clean empty cigarette packet (not one of mine) was found and 4 Ladybirds put into it. 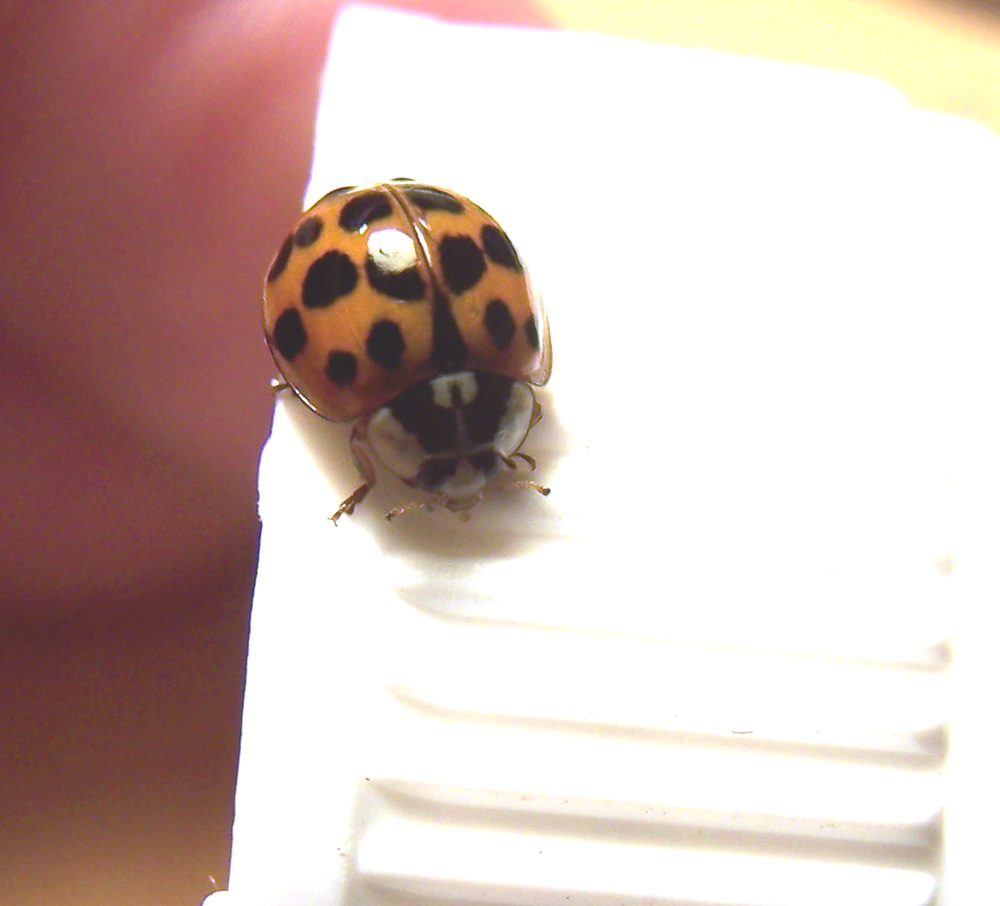 On arriving home, the packet was placed in the ’fridge for later inspection. Additionally, another such Ladybird was found on a small sunflower in the garden here, which is only about a mile from the pub. This was placed in a small pill bottle & also put in the ’fridge. Several hours later, it was decided to try to photograph them. I tipped them out onto a wooden table, expecting them to be quite quiescent after being in the ’fridge. They were quiet for a minute or so, but then quickly revived and began walking about vigorously, making them difficult to photograph. They also soon took to the wing, and flew up into the lamp being used for illumination, as it was dark by this time. One of them had accidentally been killed in the capture process, but the other four became still more active: 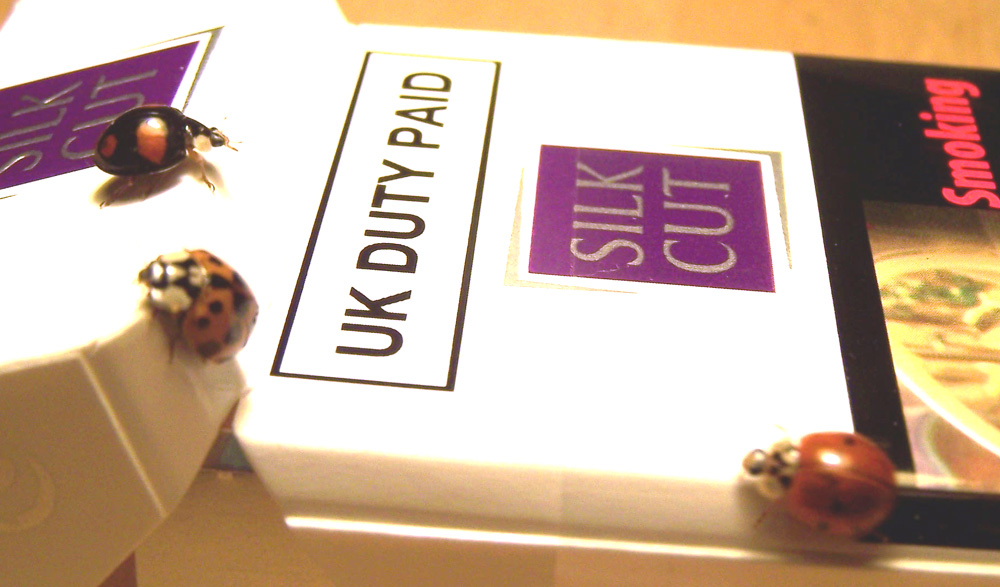 Three of them – all different – are seen here, swarming over the cigarette packet in which 4 of the 5 specimens had been brought home. They flew about, and landed on the camera and walked on it, then flew back to the table. It was quite pleasing to get this blurred shot of 3 of them together, such was their activity. It is this high level of activity, I suppose, that will enable them to oppress and eventually probably supplant our native Ladybirds! They are rather larger too, of course. 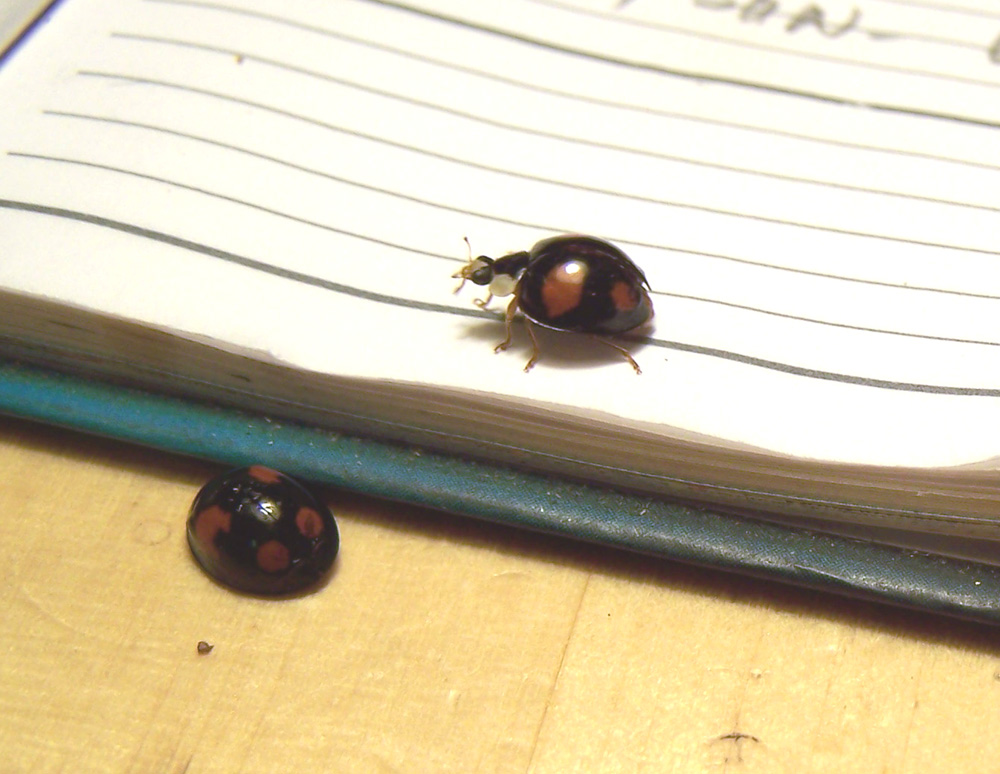 Here are two of them, one impudently walking on my diary, which I keep in the sun-room to record the maximum & minimum temperatures each day, the prevailing weather & so on. No self-respecting ladybirds native to our land, the two-spot, the seven-spot (and the very many other species) would act in this way, surely? I have never noticed such things before. I’m afraid that the gaudy ‘cocktail’ of variously-spotted insects that you see in these fuzzy photographs bodes ill indeed for our native species. Of course, that is why they have got the name ‘Harlequin’: it is seemingly one species, Harmonia axyridis, but which is exceedingly variable; not like our own, which are usually all the same. Coccinella septempunctata, as its name implies, is our native seven-spot Ladybird, and – as far as I know – all individuals of that species just have the 7 spots, almost always in the same place. But enough rambling from me; after having first appeared in this country in the South-East only in 2004, it has spread like wildfire! If you are still reading this stuff and live in West or North Wales, or in the Lake District, or anywhere North of that, they haven’t arrived with you yet. But I dare say they will! I’m off tomorrow to play at a Jazz Festival in Ambleside, Cumbria for a few days – and you can be sure, I will be on the look-out there for these hyper-active little beasts. But to learn much more proper data on them, just go to this link, where, if you are in the North & West, you can also help record their spread. (The Midlands is already engulfed, so they don’t need any more reports from here.)