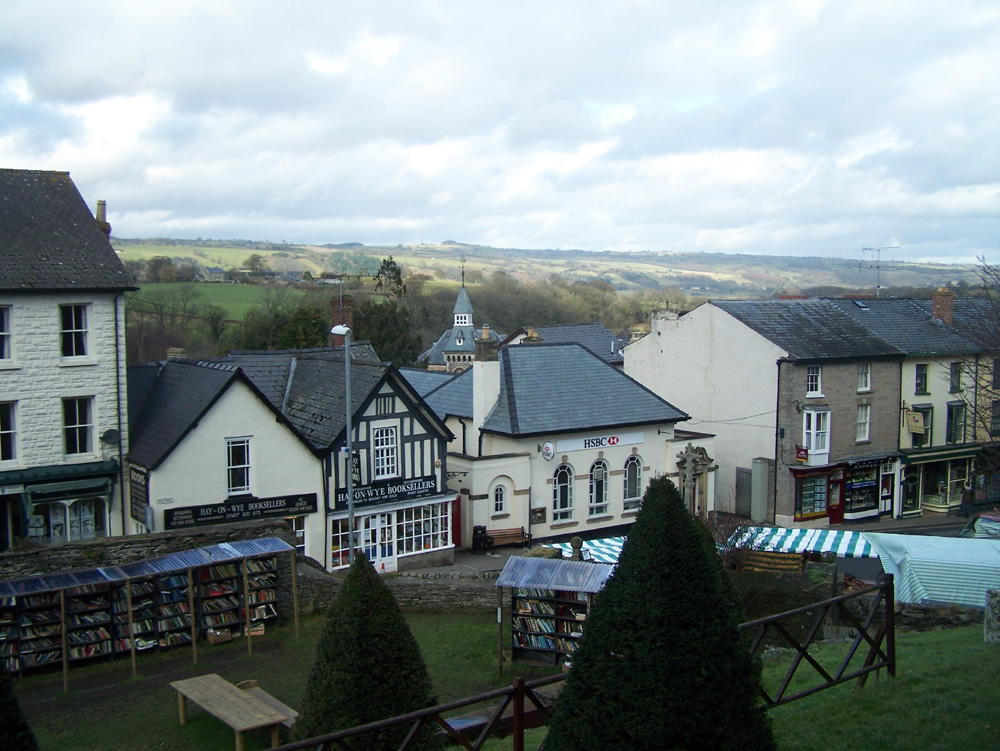 23rd February 2011. A view from the Castle at Hay-on Wye. For some strange but commendable reason, Hay-on-Wye, a delightfully remote place, is an important centre of the Antiquarian and second-hand book trade. The lean-to book shelters you see are the open-air ‘trust’ bookshop, where presumably much of the slow-moving stock of the many bookshops can be placed, and left to its own devices. There are only 2 prices: 50p for a paperback and £1 for a hardback. You put the money in a slot in the wall. The River Wye must be the border between Wales and England, or if it isn’t, something is terribly wrong. ‘Wye’ is one of the fundamental ancient names for a river. The ‘Oxford Dictionary of English Pace-names’ simply says that ‘Wye is an ancient pre-English river-name of unknown origin and meaning.’ This is fascinating, because river names are almost invariably of extreme antiquity. There are many Celtic river names still in use, as the ODoEPN freely records – but usually only if it’s sure that it’s a Celtic name. ‘Avon’ is one such. It simply is the old Celtic word for ‘river’; no special sort of river – just a river. It still means ‘river’ in Welsh, which is, essentially, a Celtic language. Therefore the many ‘River Avons’ in England are examples of redundancy, as in ‘low’ and ‘hill’ mentioned above. The point is, that there are also rivers called Wear, Wyre, and Wey – which seem to a simpleton like me at least to have the same root. The ODoEPN admits that some of these may be Celtic in origin; the Wyre in Hereford & Worcester is defined as meaning a winding or meandering river. However, there seems the distinct possibility that Wye might be of pre-Celtic origin. And if so, we probably have a word, meaning river (or some sort of river), from the language spoken by the people who were already here when the Celts began to move in. It’s all getting a bit too deep for me; but if the Celts moved in – or simply had great influence – that might have been several hundred years B.C. Apparently, nothing is known of the language spoken by the people who were already here; it’s totally vanished. Except, perhaps, for a tiny number of river names? Wye might be one of them. And to possibly know even a single word from a language that disappeared 2,500 years ago, a word meaning ‘river’, seems to me to be a really wonderful thing! One last comment. Every river either flows into another one, or else the sea. The River Wear, in the north-east of England, flows into the North Sea; there is a town at this point, and it is called Wearmouth. 380 miles away, on the south coast, the river Wey flows into the English Channel. There is a town at that point called Weymouth. This illustrates, I think, how uniform the language and culture were in those far-off times. Alas, the River Wyre in Lancashire, flows into the Irish Sea via the town of Fleetwood, not Wyremouth; and our very own River Wye flows into the Bristol Channel at Chepstow, still the border between Wales & England. If there ever was a Wyemouth, it has gone. But Wearmouth, Weymouth, Wyremouth and Wyemouth would have made a splendid set of place-names, wouldn’t they? Still, even two of them are great names to have.