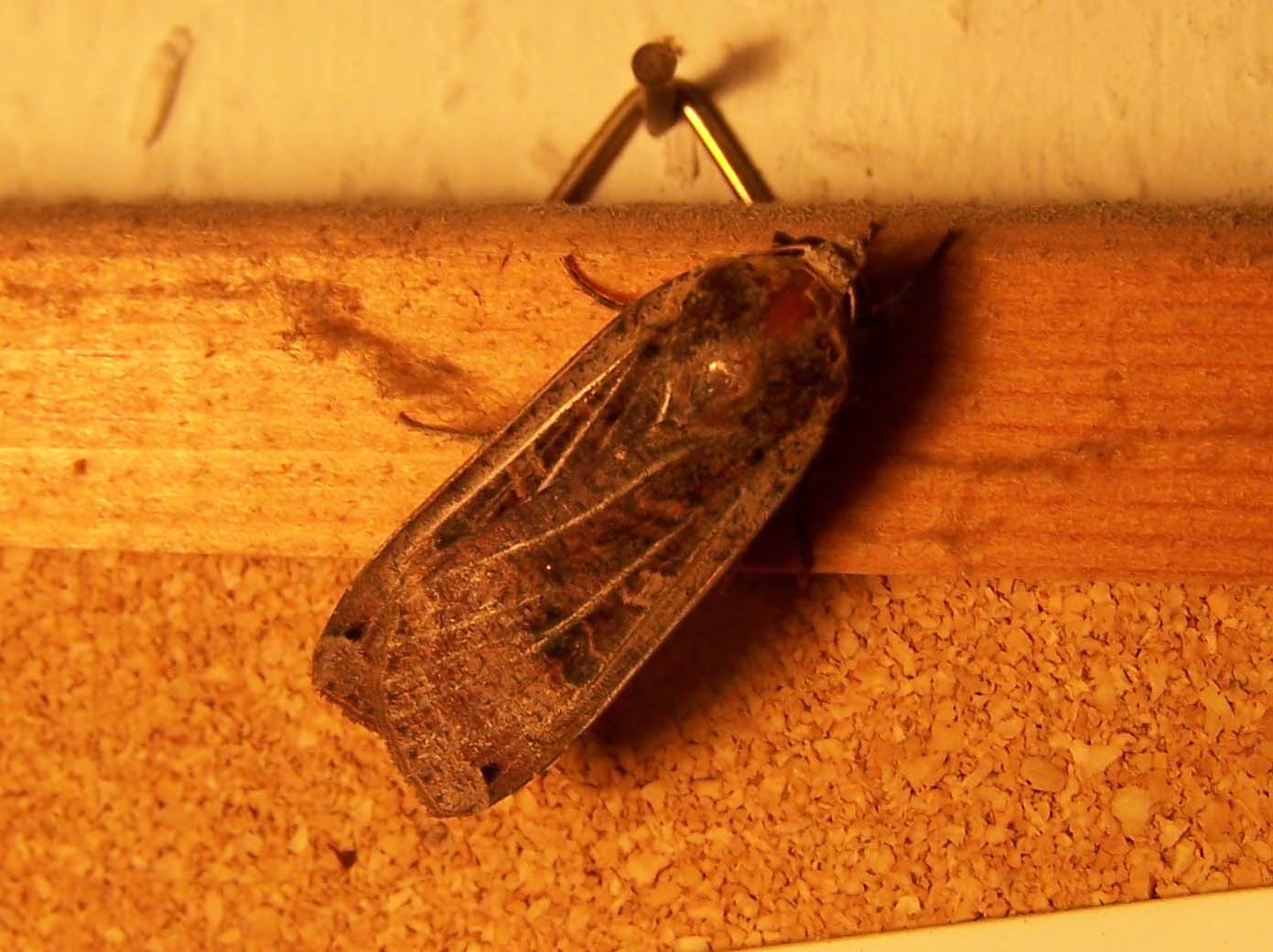 20th August 2007. A busy period with gigs has intervened and largely prevented any other photographic excursions into the genial realms of Dame Nature. However, a few days ago, while working at home as the evening came on, the thought occurred to us: having recently photographed three species of butterfly with (it must be said) modest success, what of moths? What of les papillons de la nuit, as the French so delightfully call them? Without delay, a small fluorescent tube rich in ultra-violet, (an accessory to ‘home discos’ (whatever they may be)), purchased some time ago for this very purpose of attracting moths, but never properly put into action, was set up inside the window of our upstairs work-room. Success was almost instantaneous. A Noctua pronuba (Large Yellow Underwing) immediately flew into the room. Then the trouble about photographing moths – as opposed to butterflies – soon became apparent. Firstly, you must make them settle quietly down. But, they rest – or at least ­pronuba does – with its wings folded longitudinally, so you can’t see much – certainly not its yellow underwings! But still, here it is anyway.

It had settled on top of a cork board, the sort of thing on which you pin postcards and lists of ‘things to do’, and your latest computer-printed list of the direct debits that go out of your bank account every month, and which make you wonder how on earth you cope with the rapacious demands of building societies, the suppliers of water, gas and electricity to your home, the Local Authority Taxes, the telephone, house insurance, bank loans, credit cards, payments to a modest pension fund, Internet access, domain hosting and several other things! The only other thing notable about it – pronuba I mean, not the list – was the fact that it getting slightly worn. That is, you can see a ‘bald patch’ on what I assume to be the top of its thorax, where its plumage has got rubbed off. Naturally, the illustrations that appear in entomological text books are of perfect specimens. But here we have a pronuba that has been around for a while, and ‘seen life’ shall we say? Also, on consulting South’s ‘The Moths of the British Isles’ (Frederick Warne, London 1907, 4th Ed. 1961, fourth reprint 1980), we learn that this species is sexually dimorphic. The females are ‘pale red and ochreous’, while the males are ‘mottled & blackish brown’. On this basis, I conclude that the specimen illustrated here (notwithstanding the distortions of colour & shade present in this amateur photograph) is most likely a male. Hopefully he had already found a suitable mate. I say this, because there is a sequel.

Having photographed it, I admit I forgot about it – him. A couple of days later, following an arduous gig, I retired to bed late, with a book and a bottle of white wine, fresh from the refrigerator. Droplets of condensation naturally formed on the bottle. After 15 minutes or so of reading, I was becoming drowsy, when a whirr of wings was heard, and ­pronuba, surely the self-same example as pictured above, alighted on my bedside table. Greeting the moth as an old friend, I nodded cordially to him. I don’t say he nodded back, but what he did do was walk over to the wine bottle, prop himself up against it with his forelegs, and with his proboscis, drink greedily of the water droplets on the bottle. I watched him do so for two or three minutes, enraptured – indeed highly privileged – that I should have the opportunity of study the ways of Nature, while comfortably reclining in my bed, with a glass at my elbow. Of course, what I should have done, was to get out of bed and bring the camera to record this incident. Alas, the rich, passionate & devoted blood of Kirby or Spence, Henry Newman or of P.B.M. Allan, does not run in my veins! However, you will be pleased to note, that I did bestir myself enough to get out of bed, pick up our stalwart pronuba, and release him from the upstairs window, as a reward for his versatile persistence. Who knows: perhaps he had not already paired after all? 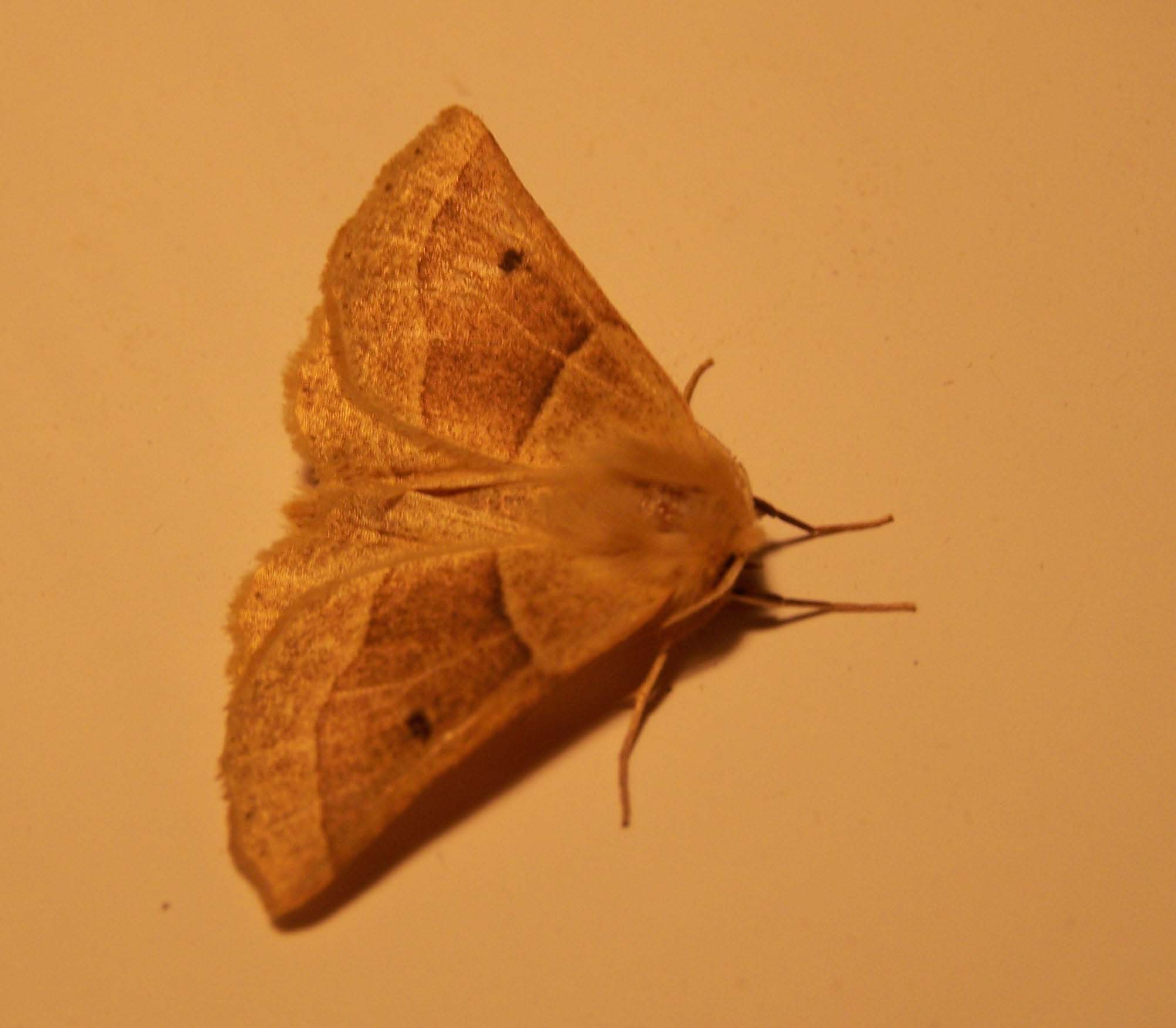 The next day, I entered my workroom to find a moth on the wallpaper. While Noctua pronuba must be known to practically anybody, including myself, it is not to be taken that this means I know what very many moths actually are. No; perhaps 10 or 12 at the most. But one can always look through a reference book to try to identify a ‘new moth’. Let us try it with this one, which is of the sort that roosts with its wings more flattened out. Alas, it does not seem to work. I have leafed through both volumes of South and can not identify it. It is relatively large: by which I mean it might have a wingspan of 1.5 inches, perhaps a little more. It seems odd that it can’t be found… Once, without the aid of a camera, I remembered sufficient of a small day-flying moth seen on the estuary at Maldon, Essex, to later identify it as Chiasmia clathrata, the Latticed Heath. True, that has a very distinctive pattern. But surely the moth opposite is distinctive also?  Surely, it must be one of the ‘thorns’? Do you know what it is? If so do please let us know! 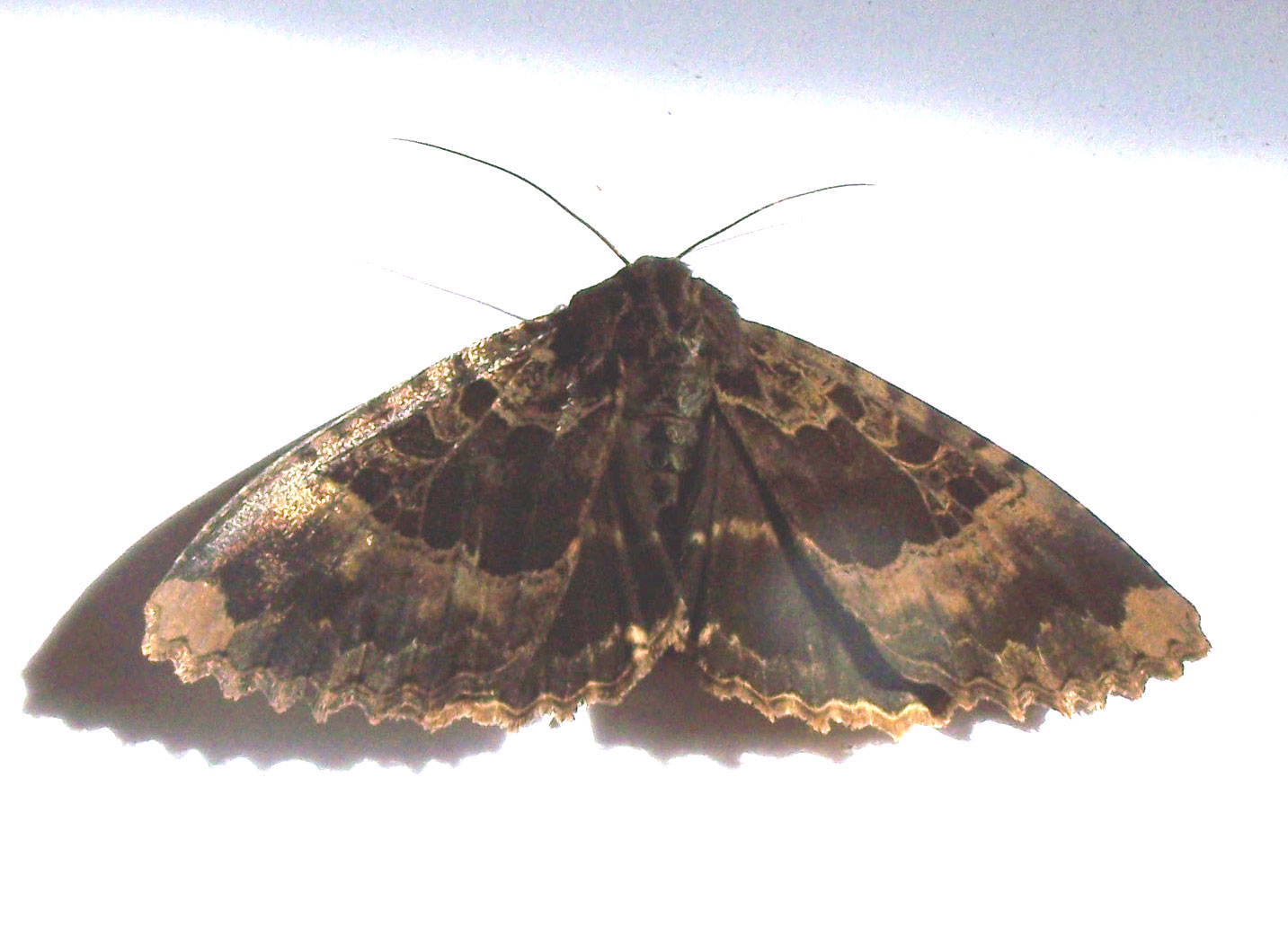 Anyhow, to draw this erratic chapter to a close, that same night, I found to my delight, that a large, gracefully slow-flying moth was present in the work-room. It seemed most likely that it was ‘The Old Lady’ Moth, Mormo maura. It proved very difficult to photograph though. I kept it overnight in a large plastic box, and attempted to photograph it the next morning in bright sunshine. The excess of light was in fact an embarrassment, and it was only by greatly tweaking the brightness & contrast that the above shot was possible. After all, moths were never meant to be seen at all, let alone photographed, in bright sunshine? This image is altogether too golden brown and ‘contrasty’. Still, I’m pretty sure it is Mormo maura, and it makes me wonder why it is called the ‘Old Lady’? Is it so called because its relatively sombre dark colouring has a fancied resemblance to the conservative garb of an old lady of the seventeenth or eighteenth century? Or is it because its flight is rather hesitant, as it dips and wavers and ‘side-slips’ as it goes, much as a gracious – but elderly – lady may have moved in those far-off times? It wouldn’t surprise me at all if that was the reason. (Nowadays, of course, elderly ladies move in a much more resolute fashion, and in e.g. queues interpose themselves without any hesitation, between you and those in front of you, not even giving you so much as a slight deferential smile, which at least, they were formerly wont to do.)

The origin of the scientific names of our British Lepidoptera have been fully and reliably set out by Lt. Colonel A. Maitland Emmet, MBE, in his monumental work ‘The Scientific Names of the British Lepidoptera, Their History and Meaning.’ (Harley Books, 1991). But I know of no equivalent work (however much less important it assuredly is) concerning the trivial names of many of these same insects.

On the whole, I think that I will confine any future casual ‘nature study’ photographs to things that can be shot in daylight, and without any undue exertion!