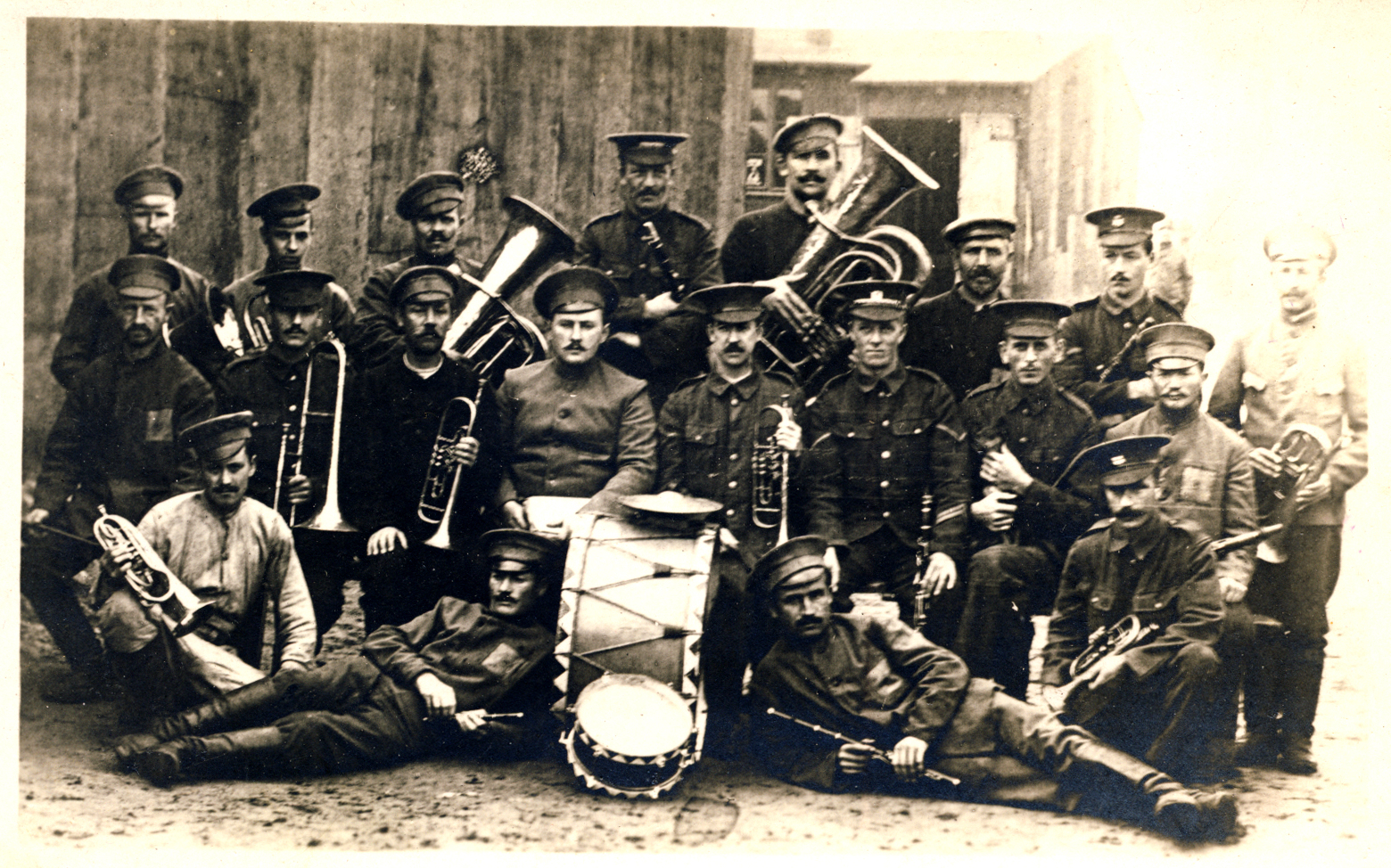 What, indeed? There are quite a lot of postcards on this site, but mostly they are merely illustrative of what may be called Social History. Pictorial Scenes of Old Birmingham, steam locomotives, old dance bands and such-like. However, IMHO, the two here are History Itself. The one you see above was relatively expensive at the Birmingham Postcard Fair last year. It just looks like a band. But I simply couldn’t leave it behind. The reason for that will become obvious when you look at the other side. 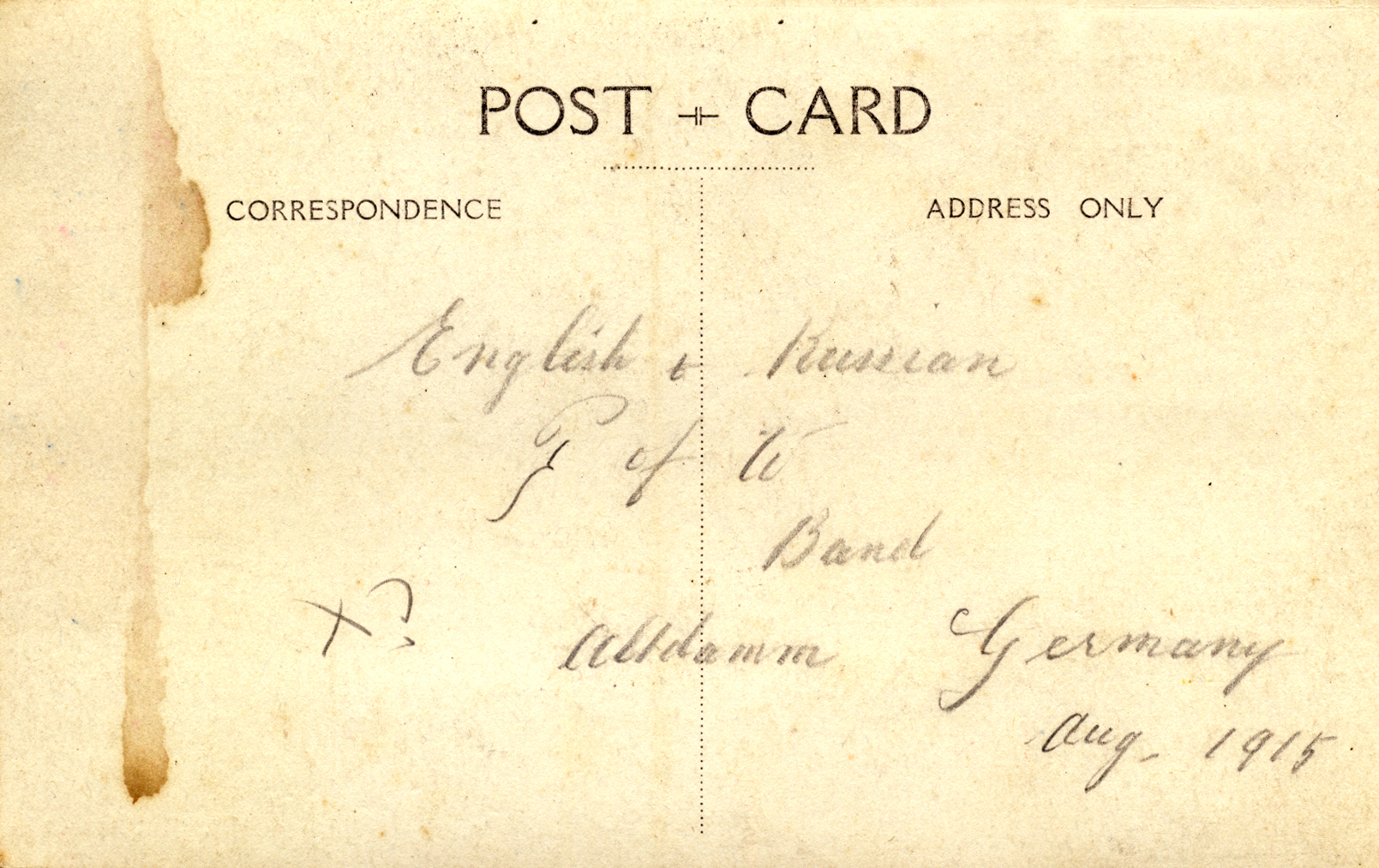 “English and Russian P(risoners) of W(ar) Band. Altdamm, Germany. Aug 1915”. Let’s have the front again, and discuss it a little.

Identifying the uniforms – or the remains of them – will probably be a pleasant exercise for the military historian? The two reclining figures wear boots, so surely Russians? Even I know that the peaks on Russian caps were short & turned well down. As to the brass instruments, there appears to be a preponderance of rotary valves; or perhaps piston valves not quite where you expect them. It seems the Germans gave them instruments, or at least gave them to the British musicians, because I was told that at the start of the Great War, British Regimental Bands (except the Guards Regiments’ Bands) were disbanded and their members transferred to the ranks. All in all, and especially in view of its relatively early date in the Great War of 1914-1918, I think that this is thought-provoking & poignant image. Who were they? Did any of them get back to their homes? We hope so; but we will never know. 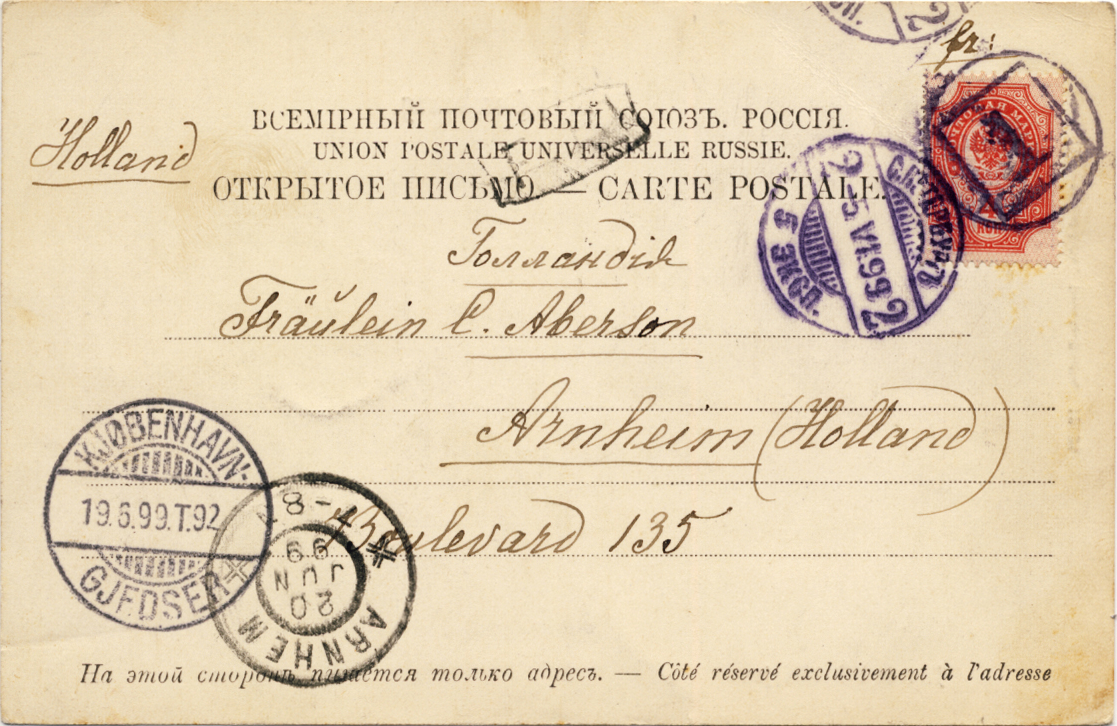 Again, a Russian connection. This is a postcard sent from St. Petersburg to Arnhem in the Netherlands, in 1899. It has a number of interesting markings, but the salient ones are three. The first, in deep violet, just clipping the 4 kopeck stamp, is St. Petersburg, dated 5th June 1899. The card evidently travelled first to Copenhagen in Denmark, thus the KJØBENHAVN mark dated 19th June 1899. The third was stamped on its arrival in Arnhem the next day: 20th June 1899. So what history is embedded in this otherwise prosaic card? Well; superficially, it suggests that a card posted in St. Petersburg on the 5th of June took 14 days to arrive at Copenhagen. In view of the appalling reputation that History has been imposing for the last century or so on Imperial Russia under Czar Nicholas II, that length of time might seem to fit the bill. A régime riddled with stasis, corruption and chronic decay could hardly be expected to run an efficient Postal Service, could it? Oh, but yes it could, and it did: for in 1899, Imperial Russia still followed the old Julian Calendar, which was thirteen days behind the rest of Europe, which had long ago adopted the now-universal Gregorian Calendar. Therefore, we must add thirteen days to the Russian 5th of June, giving us the 18th of June. So the card was posted in St. Petersburg on 18th June 1899, arrived in Copenhagen the next day, 19th June, and in Arnhem the day after: 20th June. All very efficient indeed.

I can’t help wondering whether a postcard addressed to the Netherlands, posted in St. Petersburg today, the 23rd February 2016, would get there two days later. Quite frankly, I doubt it very much. However, I am very willing to be proved wrong!