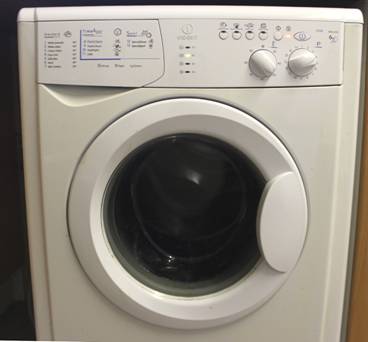 January 19th 2015. Oh dear – I was running out of clean clothes. You see, over the past few months, when you turned the washing machine on, all the lights would flash. The first time it happened was puzzling, but it only lasted for 15 or 20 seconds, then it became normal. We then just carried on, and the machine worked fine. As time went by, all the eight green lights (and possibly the red one – I’ve forgotten already) would flash together for longer and longer before going out & becoming normal. It ended up with us going away, and coming back some time later, in case they had stopped. Eventually came the much-dreaded Day of Judgement: they just flashed all the time, and never went out, & the machine wouldn’t work. We even went away for the weekend; but when we came back they were still flashing. (No; we didn’t actually go away for the weekend leaving the machine switched on – that was just a figure of speech.)  8^)

I suppose an eight-year-old washing machine is fairly elderly as these things go? I know in the photo. it looks bright & new, but that’s only because I cleaned the front of it specially for this web-page. 8^)   Anyway, before we threw it away, it seemed a good idea to look on-line in case anybody knew about this fault & maybe there was a ‘quick fix’. Bingo! This turned out to be a very common happening with quite a few different models of Indesits. There are even several YouTube videos of people demonstrating how to fix it. That’s why I didn’t bother to make one myself, but could not resist knocking up this page with a few photos.

Now, under certain fault conditions, a couple of lights may flash, so that when your friendly neighbourhood washing machine repairman calls, he will know where the fault most probably lies. But ALL of them flashing indicates not, as one might expect, that everything has broken down; no – it is simply the result of  the failure of a certain minor component on the control board. 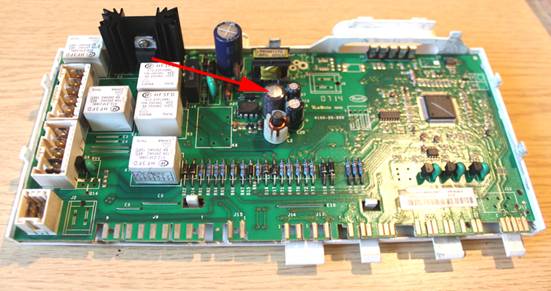 First, remove the board. You might think I have glossed lightly over the procedure for doing this, and indeed I have, because (a) the YouTube videos will show you how, and (b) the same (or a very similar) board is used in quite a lot of different models, and is located in different places. Thus there is no really standard procedure. However, I must insist that you unplug the machine before taking the back off. Not all the YT videos cover that point, and it was only a few weeks ago that I foolishly groped inside a piece of gear I was working on, not having taken out the plug, and received a 240 V AC shock, fortunately only on one hand. YOU CANNOT BE TOO CAREFUL. While on Health & Safety, the edges of the back of the machine are very sharp, so don’t slice your fingers on it. Anyway, the red arrow points to the offending component. It is a 680 µF 10Vworking electrolytic capacitor, and obviously becomes tired after a few years. It is neither a rare or expensive component. I actually keep capacitors like this in stock in my workroom, but not the 680 µF value. I do have 470 µF and 220 µF, and if you put those in parallel, they would total 690 µF. The actual value is almost certainly not very critical. It is quite possible that a 470 µF alone would be OK. But in view of the fact that (a) there isn’t all that much space on the board to get two capacitors in; (b) it would be a bit of a codge anyway, and (c) just 2 miles (3.2 Km) from my house, a new branch of Maplin Electronics has recently opened. There, a 680 µF 25 V electrolytic may be purchased for 69p. The slightly higher working voltage is not of any real consequence in this application. The red arrow above indicates the offending capacitor. (Alas, the entire Maplin Chain was closed down last year, 2018.) 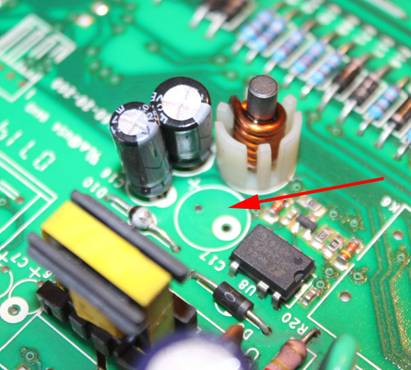 Here, you see where the old capacitor has been removed, by unsoldering the two wires on the bottom of the board. This is a slightly more fiddly job than one might think. Of course, a friendly neighbourhood washing machine repairman might simply fit a splendid brand-new board for you. As far as I can tell, these cost around £120, and have to be programmed – don’t ask me how! £120 is probably half-way to a new machine, and washing machine repairmen – even the friendly neighbourhood ones – don’t tend to work for nothing… but I digress. 8^)  Above, the white ring around one hole indicates where the negative of the capacitor has to go. Electrolytic capacitors have a positive and a negative wire, and this must be observed when you put in the replacement. If you neglect the polarity, it certainly won’t work, and while I don’t think the capacitor would explode or anything like that, it won’t like it one little bit! 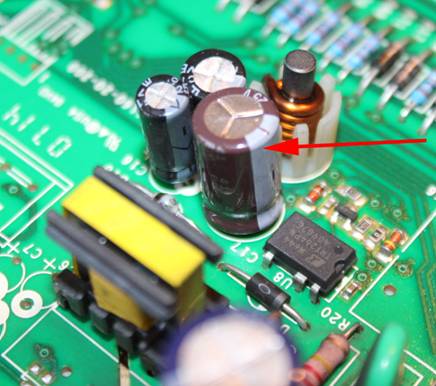 The new one has been soldered in place. The three segments to be seen on the top of the new one and four on the two neighbouring electrolytics, are to vent upwards the contents of the aluminium can in case it ever wants, or needs, to explode. An exploding electrolytic is a rare event these days, but is very disconcerting, as it goes BANG!, or at least PHUT! Also, it sprays the gooky contents of the can all over the place. In fact, the top of the faulty capacitor we removed, had become slightly convex. This is not to say that it was on the point of exploding; but it is a diagnostic feature that indicates the capacitor had changed inside in some way, which is why it wasn’t working properly any longer.

That’s all, really. Putting the board back into its plastic casing & back inside the machine is obviously the reverse of what you did to get it out. Apart from a new capacitor, a soldering iron & a tiny bit of solder, you will only require a screwdriver or two with the above bits. The PH-2 is for the back plate, and the T-15 for the screw that holds the plastic casing of the board to the machine. The photo. at the top of this page was taken after the machine had been put back together & was working OK again. Hooray!

BE AWARE OF THE LETHAL DANGER OF MAINS ELECTRICITY.

IF IN ANY DOUBT WHATEVER, LEAVE IT ALONE!