Sunday 5th February 2017. Up late. Did nothing at all except the sky in the jigsaw puzzle. For some hours progress was v slow, just based on colour, with tiny details of clouds &c providing the position. By mid-pm really had had enough & was going to chuck it in, but then thought of classifying the pieces, of wch about 90 remained. This proved very interesting! The great majority of pieces have two tabs and two bays, but some are fundamentally concave, while others are convex. These are in a ratio of about 2:1. The third-commonest sort have one corner like a blunt spear-point. These are either left-handed or right-handed. Probably about 1 in 10 pieces are like this, and some have a double spear-point. There are several other types, e.g. more or less square, with varying combinations of tabs and bays, but fortunately these are quite scarce! In the case of the concave & convex pieces (the vast majority) the tabs and bays are always opposite each other, but they possess varying degrees of symmetry. 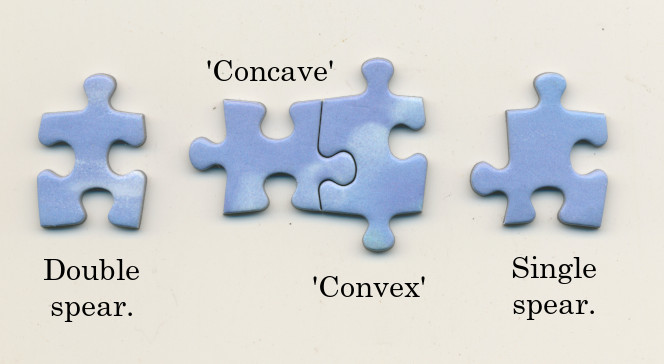 For example, the concave piece in the image: the left tab is highly symmetrical, while its right tab has a large degree of asymmetry. Its neighbouring convex piece, therefore, must have a bay with equal asymmetry. There is no rule of ‘balanced horizontal asymmetry’ in a piece, as may clearly be seen. However, in this puzzle at least, there seems to be a rule that vertical bays & tabs do possess balanced asymmetry. There is also a rule that all convex pieces are positioned with their tabs vertical, and concave with the bays vertical. Again, it would seem from this puzzle, that there is a constant offset of vertical bay and vertical tab, and more important still, that the larger ‘half’ of the piece is always on the left hand side. This being the case, it is at once obvious that I have placed the single spear on the scanner upside down! Inevitably, each side of a convex piece must mate with four concave ones, and vice versa. Had all this been known several days ago, the puzzle would have been finished far quicker! As it was, even before all the was fully understood, the majority of the sky was finished in about half an hour. The only remaining problem was to rectify three or four misplaced pieces; for in a 1,000 piece puzzle, there will always be a number of cases where pieces are, to all intents & purposes, exactly the same shape; therefore if the colour is slightly mistaken, the piece will not be in its proper place. One might think ‘So what. If the correct piece is exactly the same shape, what difference can it make?’ It would seem to be a particularly fiendish property of this type of jigsaw puzzle, that it won’t actually work unless every single piece is in its proper place. Whether this is actually so, I have no idea; and certainly cannot get my head round it. But it did take at least half an hour longer to finalise everything, as I had ended up with only 5 pieces to go in, and NONE OF THEM WOULD FIT THE FIVE REMAINING SPACES! It remained to find two or three misplaced pieces, detectable by slightly different colour, which we had overlooked. Removing these meant that we had 7 or 8 gaps; but then, each piece then went into its correct place OK, and the puzzle was completed. 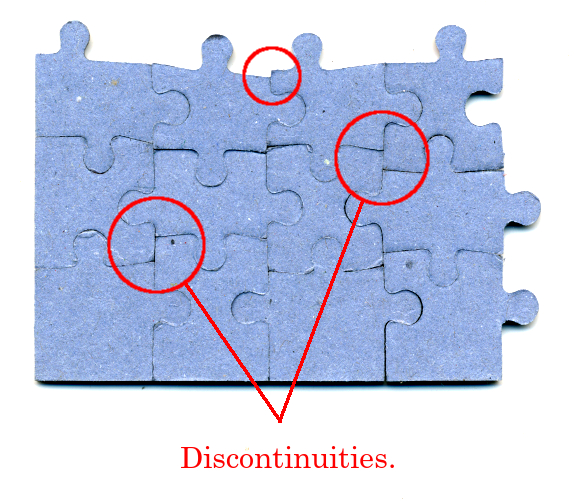 In order to explore further, two smaller (500 pc) puzzles were bought from W H Smith – their own brand. Surprisingly, the first one we tried was much more difficult. This was because, consistently though the puzzle, the horizontal piece joints were not of equal height. The image above (the underside of a corner) shows some of these discontinuities. The vertical columns actually did have uniform width, as can also be seen from the image – which was a great relief; but much more reliance had to be made on piece colour, and tab/bay positioning. Additionally, there were many more piece shapes in this puzzle, and there was no concave – convex rule as in ‘The Air Show’. It remains to be seen whether the other W H Smith puzzle is cut the same. And for that matter, another, smaller Gibsons should be tested. If, for example, every puzzle has a unique cut, that would be appalling. But I already know that is not always the case, for you can obtain spare pieces for some puzzles. We have deliberately not investigated jigsaw puzzles on line to any extent; it will be fun to find things out for ourself.