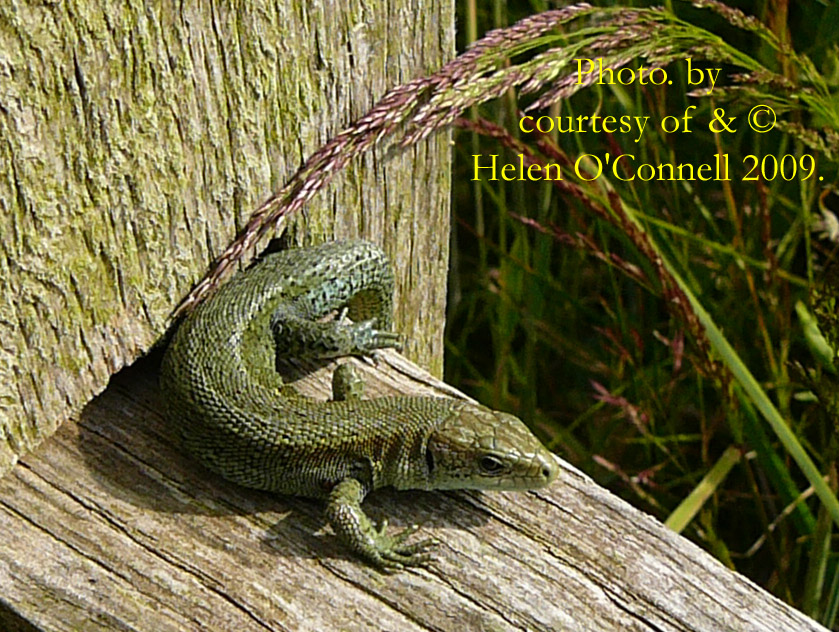 This page was originally a long, rambling account of my (few) reminiscences of lizards. That text is still here, below these new notes. But we begin with these excellent photographs of the two species of lizard which occur on the British mainland. Both photographers have kindly given permission for them to appear here. The Common Lizard is to be found in suitable habitats, Google tells us, all over the British Isles. So its status is probably not threatened. But the Sand Lizard is confined to a very few areas: North Wales coast, the Lancashire coast, and sandy heathland in Dorset. It is scarce, very endangered, and protected by Law.

When this page was first written, I could find no non-copyright image of a Common Lizard, so left the space blank, and went on to speculate whether a ‘green lizard’ I saw in Anglesey as a kid, about 1950, might have been a Sand Lizard. If it was, it does not occur there any longer. Helen O’Connell happened to find the web-page, and kindly sent the photo above which she took in Anglesey, because, when all said and done, it is a lizard that is more green than anything else. I then speculated that it might be a sand lizard, still surviving in Anglesey. A couple of days ago, Paul Hudson, a specialist in these matters, recently found this page, and generously wrote, correcting my wishful thinking & confirming Helen’s specimen as the Common Lizard. But he also sent two photos, taken by Mike Brown, of a male Sand Lizard, taken elsewhere in Wales, and a female from Merseyside: 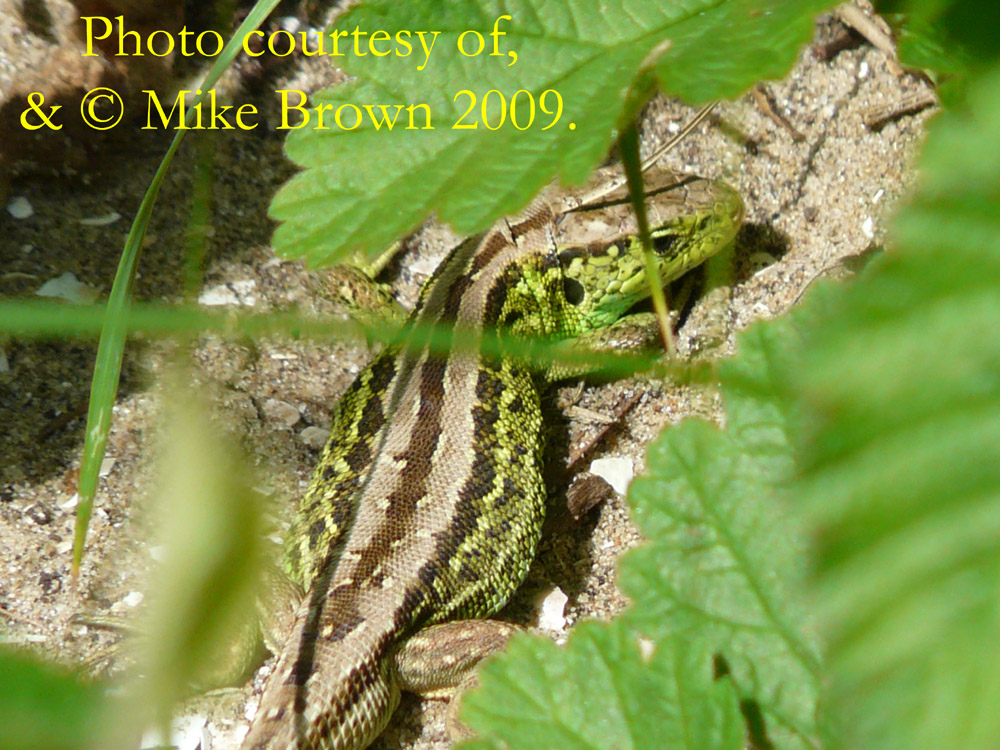 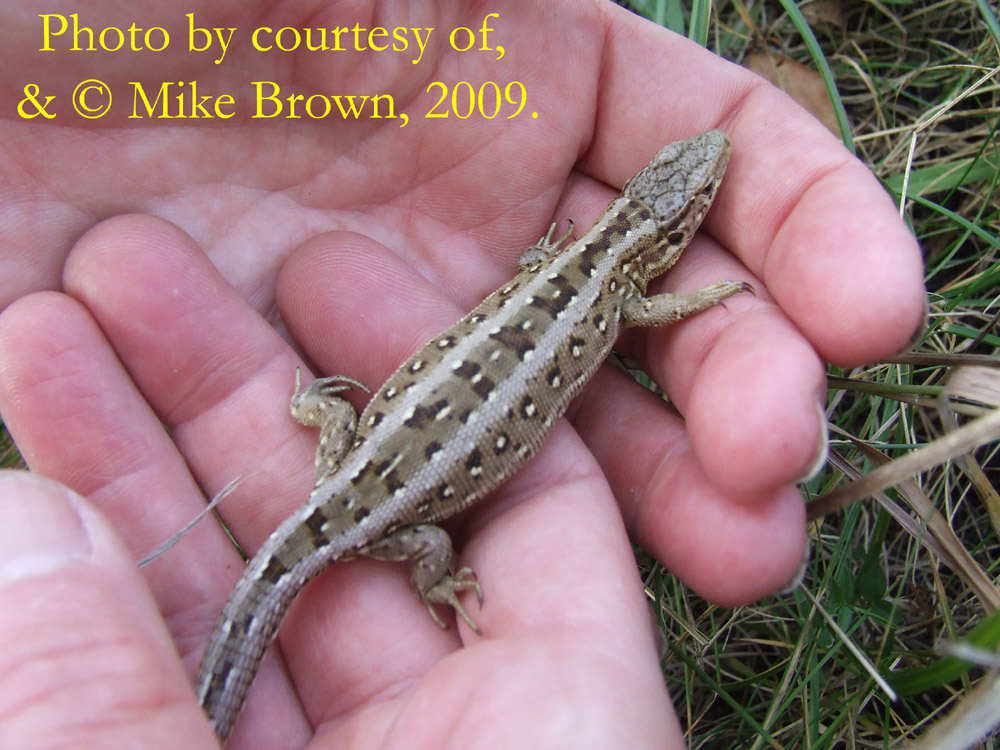 So the identification of our two species is very easy; there’s no mistaking the two prominent light stripes down the back of both sexes of the Sand Lizard – evidently a strong diagnostic feature for this species.

These lizards, along with all other life-forms, are lovely entities which we may – or may not – be lucky enough to see. The work being done to preserve and conserve their populations is of inestimable value, not only to prevent them from extinction per se, but also to help preserve the self-esteem of the human race. Many would say that the priority lies with preserving human lives. I strongly agree; but unless we can successfully preserve just the flora and fauna of our world, how can we possibly hope to start on the far more formidable task of preserving humanity itself?

I conclude with a 60-year old quote, a doleful one, but which has been justified to an alarming degree. These are the last lines of the text of Professor E B Ford’s book ‘Moths’ (Collins, London, 1955):

“There can be little doubt how in the near future we shall treat some of the
butterflies and moths, in common with other animals and with plants,
which grace and glorify the English landscape today.
We shall destroy them.”

After that gloom, I guess we might as well have the original and
now-trivial text of this page, when it was first uploaded?

I remember the first lizard I saw ‘in the wild’. It was in Anglesey and seemed a vivid green, the more so because I was a young child, maybe seven or eight years old. After all, aren’t all sights and experiences more spectacular, more intense, during childhood? It was basking on a large stone warmed by the sun, and I wanted to see it closer up, but of course it fled instantly as I stepped nearer.

The next time I saw lizards must have been nearly forty years ago in northern Spain. It was early afternoon in high summer, and my friend and I were beginning to realise the truth in Noel Cowards title: ‘Mad Dogs and Englishmen…’ We were on a camping holiday, visiting sites in south-west France and northern Spain where prehistoric cave paintings could be seen. We were heading towards Altamira, but the afternoon was so hot we were baking in the old van we were driving, and so we stopped and escaped from the sun behind an old stone wall. Though still very hot, it was agreeable to lie torpid in the shade, propped up against the wall. After a few minutes a lizard emerged from concealment. It was soon followed by others, and eventually maybe ten or twelve of them were slowly foraging for whatever they fed upon. But these were drab coloured, sluggish creatures, and rather unprepossessing, resembling tiny versions of the iguanas of the sort television documentaries on the Galapagos Islands have made familiar. Though, of course, they were in no way less adapted to their grey and dusty environment in northern Spain than my original green lizard was to the verdant Isle of Anglesey.

The lizard with which this story is concerned, however, did not make its appearance until about ten years ago. Staying in Bed and Breakfast accommodation for several nights can be rather inconvenient for a musician with much equipment and two or three instrument cases to cart around. So I have long been in the habit of taking a tent and other basic equipment, and camping out whenever I have to stay for several days in one place. It was during one of these expeditions – to Bude, in Cornwall – that the lizard was accidentally ‘gathered in’ while folding the tent &c. I had been back at home for nearly a fortnight and in spite of my lackadaisical methods, the car had long been cleared of all the camping impedimenta. But I needed to consult the road atlas to plan the route to an engagement. So I went out in the street to the car, where, as usual, the road atlas was lying on the passenger seat. I picked it up, then put it back.

“That’s funny,” I said to myself. “I could have sworn I saw something that looked like a lizard.”

I rather thought that lizards are not usually found in densely populated areas three miles from the centre of Birmingham. I gingerly lifted the atlas again. There was indeed a lizard there. Its tongue flickered out and in, evaluating the change that had occurred in its environment. I gently replaced the atlas, latched the car door, and went back into the house to fetch an old polythene ice cream container.

“This lizard must have come from Bude!” I muttered, “and has been stuck in the car for a fortnight! It’s amazing it’s still alive; I hope it’s uninjured. In any case, it must be rescued from this unfavourable situation.”

Returning with the container, I opened the door and slowly removed the atlas altogether. The lizard glanced from side to side, obviously concerned.

“Now look here,” I told it, “all you need to do is to get into this admittedly not very prepossessing polythene box, and before you can say ‘Jack Robinson’ you will be much better off and…” But the lizard, being active due to the high temperature in the car (it was only September and sun was still high), darted away somewhere in the car disconcertingly fast, and disappeared.

There was really nothing much to be done, though I became mindful of the ‘urban legend’ of the couple who bought a second-hand car that was all right at first, but after a week or two developed a bad smell inside. After weeks of frustration and even worse smell, the solution was found. The previous owners had lost their pet python, which had snaked its way into the roof-space of their car, which they had already decided to sell, and eventually died there…

Of course, I tried not to think of the Cornish lizard, which had been so arbitrarily plucked from its domicile. But I did leave the ice cream container in the car, ‘just in case’. Two weeks later, I arrived at an engagement, and took the instrument cases from the boot of the car. The lizard looked up at me. I called another musician who was unloading his car, who held the polythene box while I ‘shooed’ the lizard toward him, and he unerringly captured it, just as if he did that sort of thing all the time.

The following day, I took it, in a small glass aquarium that I happened to have, to the Birmingham Nature Centre.

“It’s probably a newt.” observed the functionary, affably, presumably long used to children bringing them in.

“No,” I replied sententiously, “it has a forked tongue that goes out and in.”

I was almost tempted to add that I had been long accustomed to observing lizards in the wild, but refrained from doing so: for as well as being something of an exaggeration, it would also have been a conceited remark. I carried in the aquarium.

“Ah yes! A Common Lizard. And in excellent condition too!”

At first I had an inclination to laugh at the fact that the hapless creature had spent a whole month living in my car but was yet still in ‘excellent condition’. But realisation soon came of the fact that firstly: it would have had no shortage of drinking water. For thirty years I have only been able to afford very old cars, and puddles of rainwater in them were commonplace. Secondly: moths, flies and other members of the insecta were still abundant – even in a car – in early October. And perhaps, at a pinch, a hungry lizard would not scruple to dine off bits of broken crisps and the crumbs of sandwiches which musicians are often forced to eat en route to an engagement when they know, as it all too often the case, there will not be time for a proper meal, and still less chance of one being considerately provided by the clients. No, the lizard’s greatest peril would have been during the loading of instrument cases into the boot, or the flinging of music cases onto the back seat.

“There are several colonies of the common lizard in the Lickey Hills” the Nature Centre officer informed me, “and when we go out there next, we’ll take this lizard along and liberate it in one of them, and it will be all right.”

So you see, sometimes things have a Happy Ending! I mean, the Lickey Hills population of Lacerta vivipara would undoubtedly benefit from the input to their gene-pool of a far-distant cousin.

The only thing I worried about for some time was: how on earth would the Cornish and ‘Brummie’ lizards, having mutually incomprehensible speech dialects, communicate with each other?

In the end, I decided that the Imperatives of Nature would undoubtedly overcome such a trivial matter.