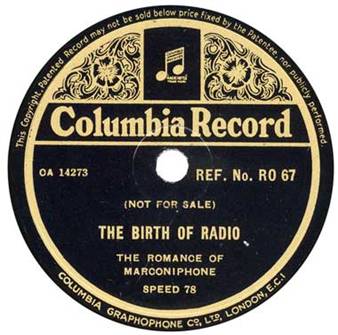 Recorded around January 18th 1934 (not a very good time for selling expensive Radio-Gramophones, records (or indeed anything else)) this record was given away with Marconi radiograms. On the other side were some selections of popular light classics and song.

After hearing this page when it was first uploaded a few years ago, Ola Andersted from Sweden kindly wrote, identifying the narrator as Ralph Richardson.

Just start the bar below to hear the record.

As you will find out, it attempts to induce the purchaser of a Marconiphone to recommend a friend who would like a demonstration of one. In return, you would receive a free copy of the book ‘A City of Sound’ – presumably whether your mate bought one or not? 8^)

Now this record is quite common – I have had three or four copies of it, and saw another three at a record bazaar a few days ago. But the book is another matter. I never found one, and I have haunted second-hand bookshops (from time to time) for many decades. Perhaps few people actually recommended a friend?

Last week, we finally lost all patience, and taxed Abebooks for a copy. No problem: eight or nine were available; curiously, three of them from the U.S.A.

The cheapest one from the U.K. sufficed to quench our burning thirst, so here it is:

Who is – or was – Ernest Pendarves Leigh-Bennett? Manifestly, he wrote books; a quick search turned up ‘Making a Modern Car’ (Armstrong-Siddeley, 1924); ‘Come Abroad With Us’ (The Southern Railway, 1929); ‘Historic Exeter’ (Exeter Official Publicity, Exeter, 1936); ‘History of a House Flag’ (Rotterdam-Lloyd, 1939); ‘Some Friendly Fairways’ (Southern Railway, 1929); ‘Red Funnel Stuff For 1939’ (Isle of Wight and South of England Steam Packet Company, 1939); ‘Golf in the South’ (Southern Railway, 1935); ‘Southern Ways & Means’ (Southern Railway, 1931); ‘On This Evidence’ (The Centenary of the Legal & General Assurance Society, 1936). On this evidence (ahem), Leigh-Bennett was a freelance author who could be retained by a company or official body to write for them. Which is exactly what Marconiphone got him to do with the above book, which is dated 1933.

Indeed, he may have been active in many other fields; but I cannot find anything about the man himself in Google – which is what usually happens when someone is prolific, as Leigh-Bennett certainly was. Alas, all the references seem only to be about his books.

A comment on a website devoted to Armstrong-Siddeley cars says of ‘Making a Modern Car’: ‘The book is written in a very effusive style…’; and so is ‘A City of Sound’. On the 78, Ralph Richardson is reading part of the text, from pp 14-15.  I always liked the phrase ‘watery wilderness’; and L-B (if he will permit us to be so familiar) was evidently much given to these alliterative pairs. Waste of the World; Solace in the Sound; Captious Critics; Horror in Hull; Telegraph Tinkles; Controls so Calmly; Temerity to Tamper; Factory Fascinations; Hierarchy of Hayes; Welter of Work; Purring Placidly; Shining Switchboards; Fumbling Finger; Helsingfors or Haverfordwest. Perhaps his masterpiece is ‘massed movement of men and machines’. If you say it two or three times, it immediately falls into a Remorseless Rhythm (hey – I can do it too!) suggestive of a railway locomotive, à la W.H. Auden’s ‘This is the Night Mail’.

The book has a deliberately ‘antique’ appearance. The edges of the hard covers are ‘floppy’ – I don’t know what the proper term is – and the edges of the pages are quite irregular, as if they have been cut roughly. I have had more than one uncut book, but have always cut them very carefully with a thin, sharp knife to make the page edges as even as possible. It is probable that the ‘antiquarian’ feel of the book (which, by the way, is only 50 pages plus some illustrations) is intended to increase the prestige and gravity of its subject? After all, the purchase of a very expensive radiogram in 1933, during the very pit of the Great Depression, was not to be undertaken lightly. The type face employed is intended to do the same thing, I think. 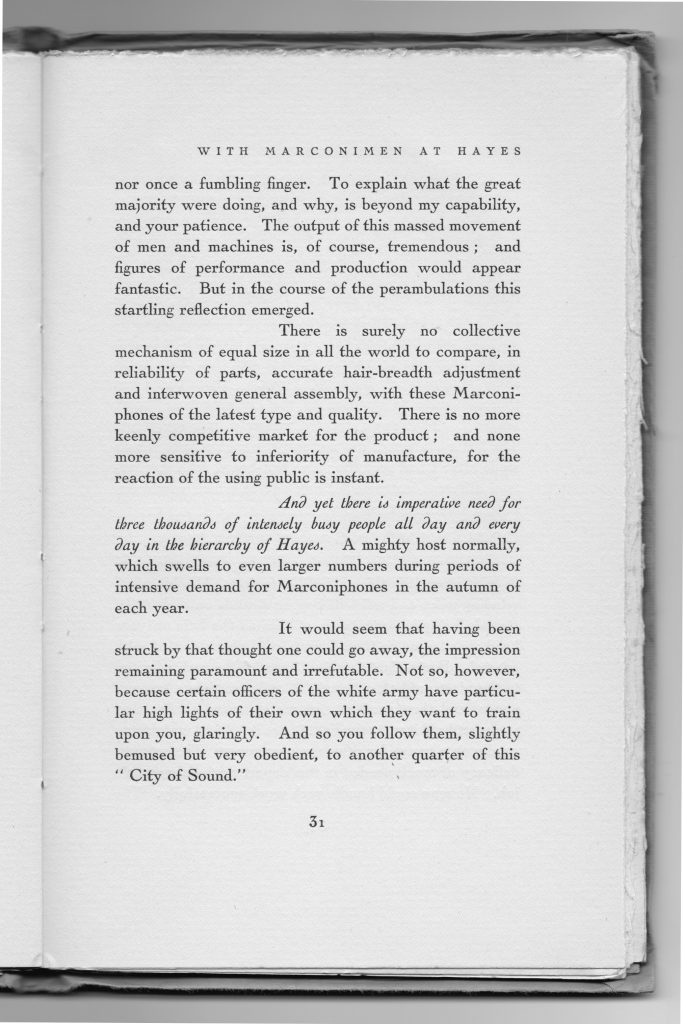 The type face is, shall we say, idiosyncratic; the italics have a most unusual back-swept tail to the ‘d’, as in handwriting of the 17th century. Ah: I see I missed ‘Hierarchy of Hayes’… For ‘Hayes’ is indeed the fundamental purpose of the book. After sections on Marconi’s early years, the use of radio in the Great War, and its subsequent role in binding together the British Empire, the second half of the book is E-B’s impressions of many days spent looking at the various departments of the Marconiphone Company, on the giant EMI factory site at Hayes, Middlesex. The Hayes factory is indeed ‘The City of Sound’. E-B records his impressions as he travels from department to department, always deferential to the skilled experts in their work at all levels, but keen to learn what they are doing, and how they do it. But he is frequently baffled by the technical details – or at least pretends to be, for the sake of his readers.

I think that’s enough? There are 8 pages of monochrome photos. at the back of the book. The second, a historic one, is given below. 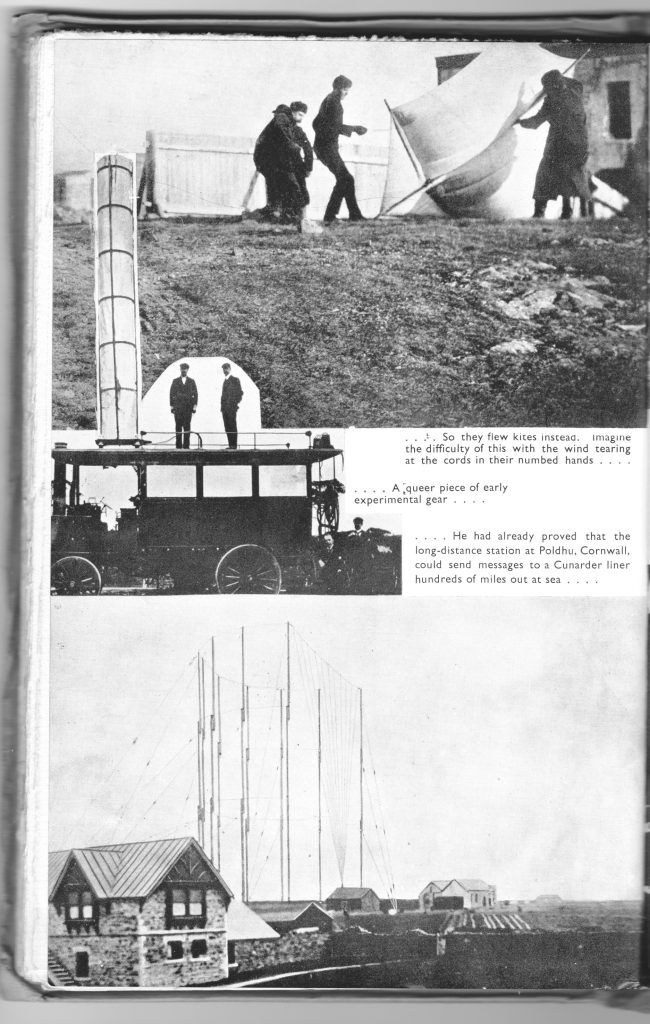 I wonder if I ought to start collecting the works of E B Leigh-Bennett? Many of them were sold or otherwise widely distributed, and are not unduly expensive. He is an excellent communicator.