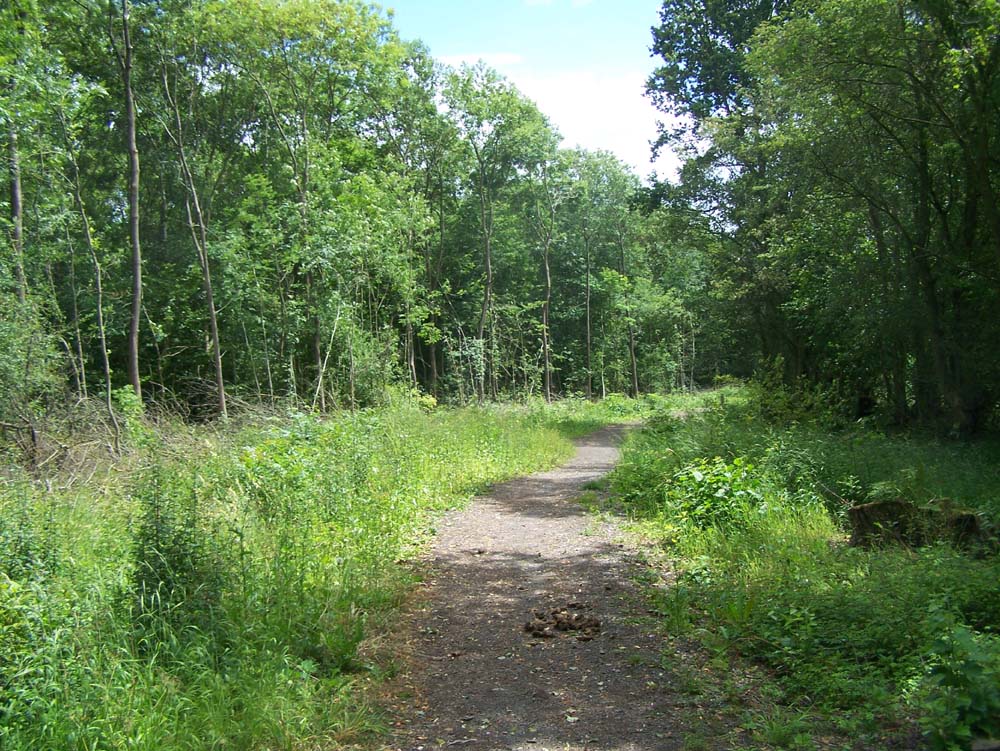 3rd July 2010. Next week will be busy, so we had decided to have the weekend off after several days working hard. But it was such a nice day that we went off to Monkwood Bird & Butterfly Reserve – a trip just over 25 miles from home. (See No. 17 in this diary for our last two visits, in 2008, which briefly describes the reserve.) Above is part of the main path as it was today, horse manure and all. There was great abundance of butterflies of several species. Actually, 36 species are recorded from this location, compared with possibly 74 species that might be seen in total in the U.K. & Ireland. However, many of the latter seem to be scarce or rare immigrants, so the effective total would be quite a bit smaller. 59 species actually breed in the U.K. & Ireland and may therefore be described as native species. The ‘butterfly of the day’ – as regards abundance – was unquestionably the Ringlet, Aphantopus hyperantus. Not being very familiar with this species until recently, we wondered what all these dark insects were. 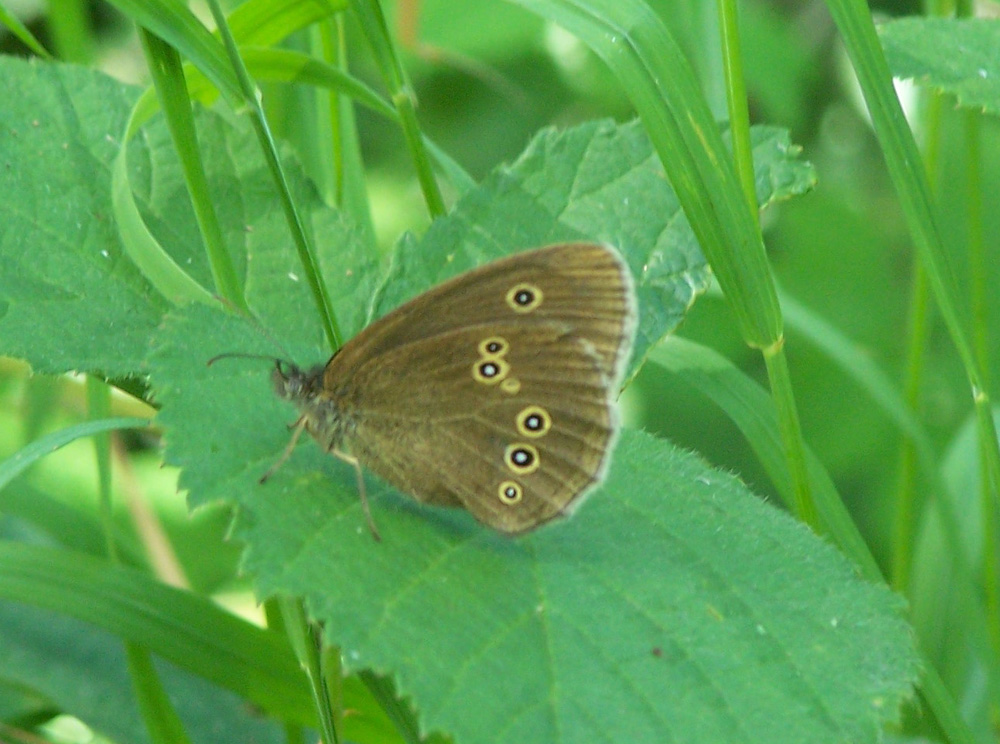 Well, the upperside of the male is really quite dark, so as a male passes with its ‘jinking’ flight – that is how their flight is described, isn’t it? – the overall effect is of quite a dark butterfly. Both sexes have the ringlets on the underside. Additionally, the female also has them – or some of them – on the upperside. And the female is rather lighter in colour on top. So a female going by would probably look a bit lighter on balance. Unfortunately we had chosen early afternoon for our visit. We should of course, have gone at about 6 a.m. or whenever the butterflies would be warming up. But alas, we have never been an early riser! By early afternoon all butterflies (with one exception, to be described below) were active and seldom settled. The above shot is out of focus, but might, I suppose, be either a male or a female. 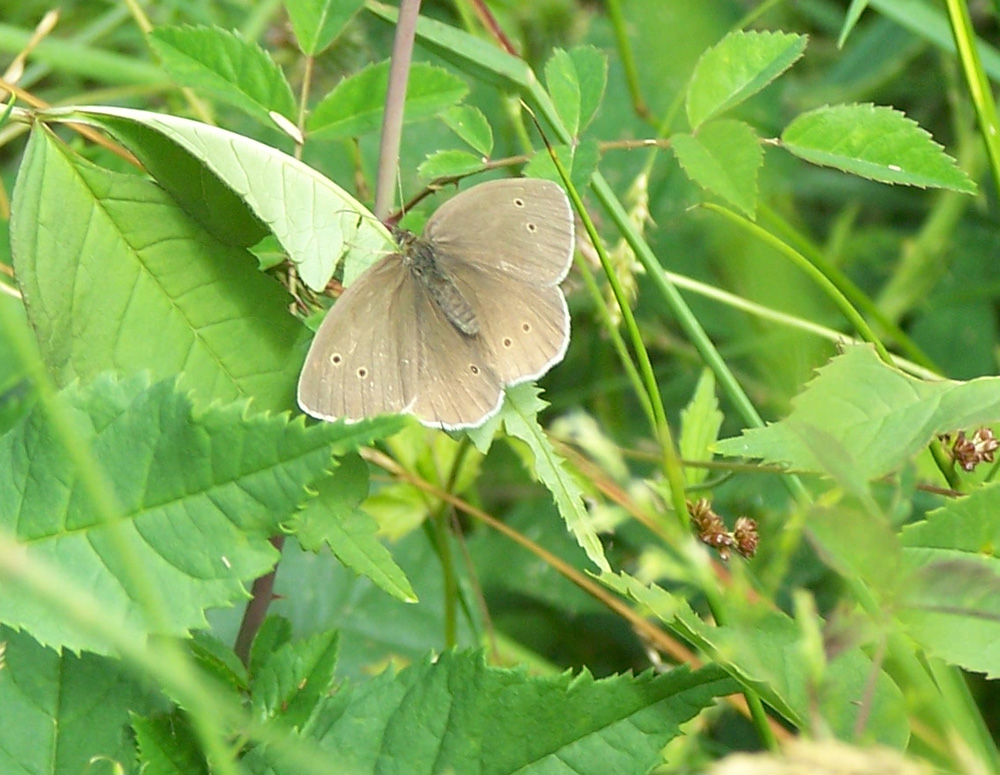 This, however, must be a female. The upperside is rather lighter than the male, but above all it has the ringlets. Comparing this one with others in Riley* and on-line http://www.ukbutterflies.co.uk/ there are a few differences. Most females have 3 spots on each forewing, while this has only two. Normal examples also have two spots on each hindwing, while one is missing on the left hindwing in this case. Of course, butterflies are really quite variable, so it’s probably OK? 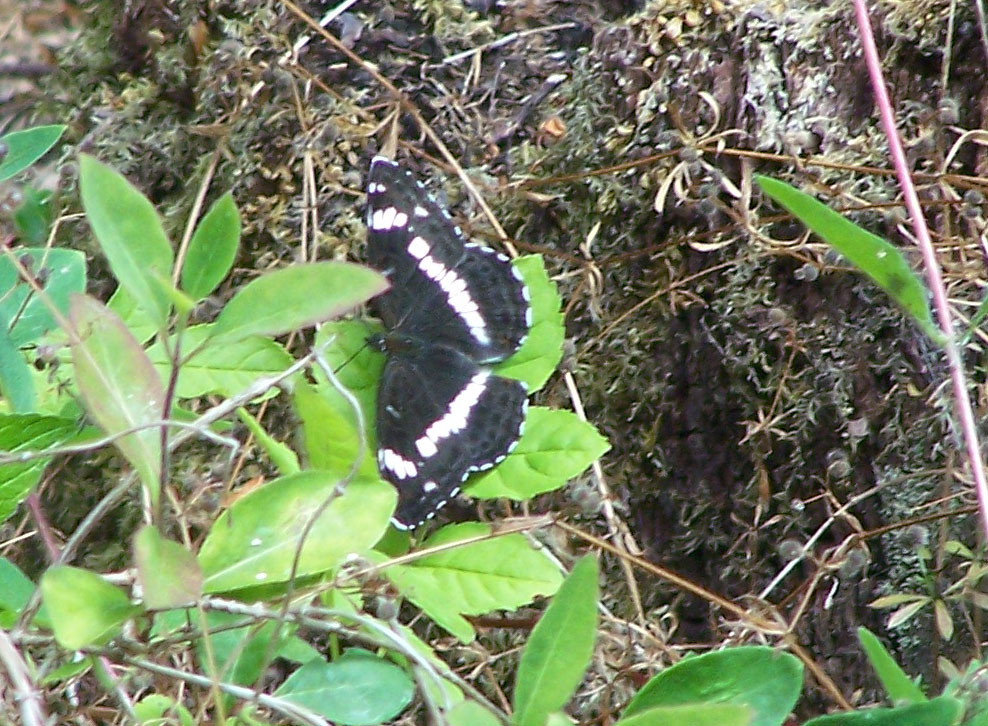 A species quite new to us was the White Admiral, Limenitis camilla. Therefore please excuse the fuzzy shot above! Enthusiasm is the name of the game in the early days… And it also comes to mind that our current camera is hopelessly inadequate for this sort of stuff. One can defeat the automatic aperture and exposure, and adjust the ‘film speed’; but I have not yet been able to defeat the dreaded automatic focus, so that a slim grass stem passing nearby is in perfect focus, while the lepidopteron which is actually the object of our shot is quite blurred. This will certainly require the Spending of Money on a better camera. Alas, at this time, the supply of that commodity is quite limited. And the Rule Of Not Leaving The Path in Monkwood certainly needs to be observed, which is why most butterflies that settled, did so just out of reach of the current camera – but then: a bad workman always blames his tools… 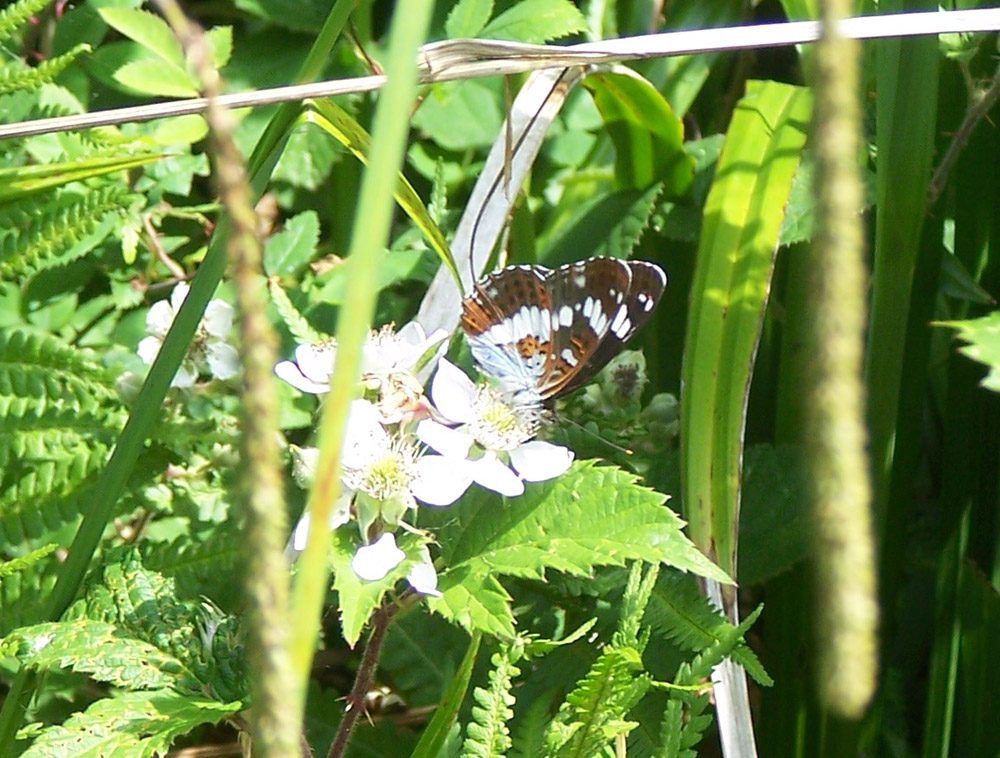 Later, we found a camilla (possibly a male, but who knows?) on bramble, quite near the path, which was very good. Never having seen the White Admiral before, it was thrilling to watch them weaving in and out of trees and bushes, gliding laconically from time to time, and really creating a ‘tropical’ impression. They were very abundant too! 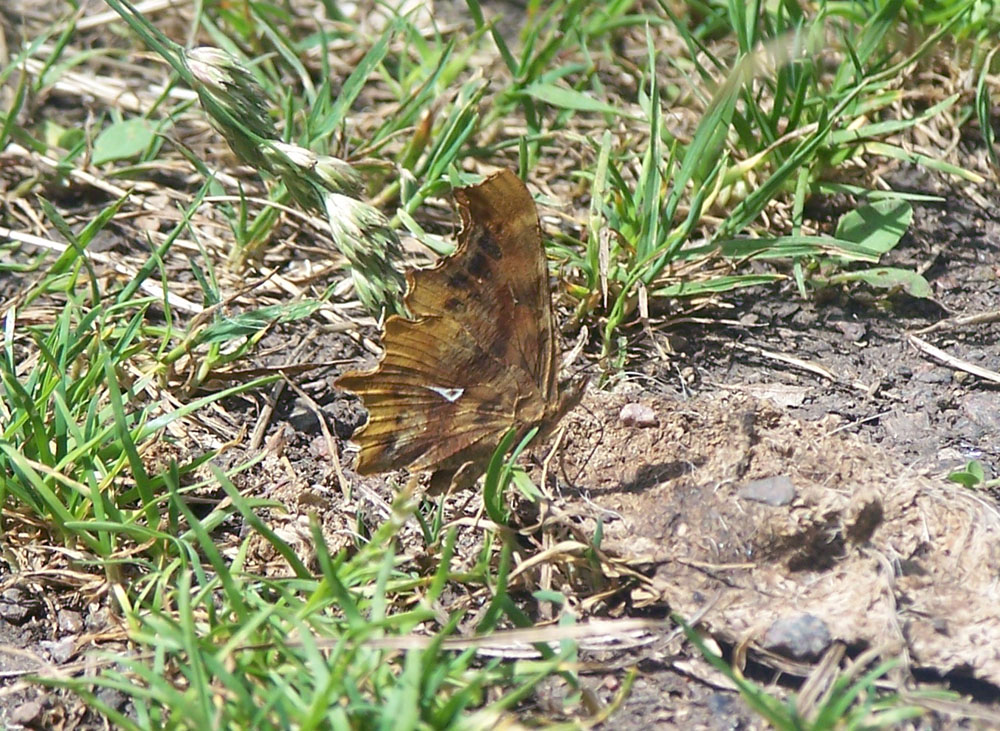 So was the Comma, Polygonia c-album, though I could not get a shot of an upperside. These Commas fly in a fast, assured, almost reckless fashion. I once found a butterfly at the bathroom window in my old house trying to get out. ‘Ah: a Small Tortoiseshell as usual’, I thought, and enclosed it in my hand to let it out. A Small Tortoiseshell will normally become quiescent at this, or flap feebly a couple of times. Not this one: it went FFRRRRRRR!!! in my hand while I was opening the window. Therefore knowing it was something different, I only made a small aperture between my thumb & forefinger so that I could see what it was when it came out. It prised itself through this aperture in an irritable fashion, as if saying: ‘See what I have to put up with!’ But at least I had time to see it was a Comma, before it zoomed off. The white mark on the underside of this one is more like a triangle than a comma. Moreover, it is extracting (or attempting to extract) useful nutrients, presumably nitrogenous, from a dried piece of horse manure, probably also in an irritable fashion. The weather has been very dry so far this year… Perhaps the Comma is the nearest thing we have to a ‘stroppy’ butterfly? 8^) 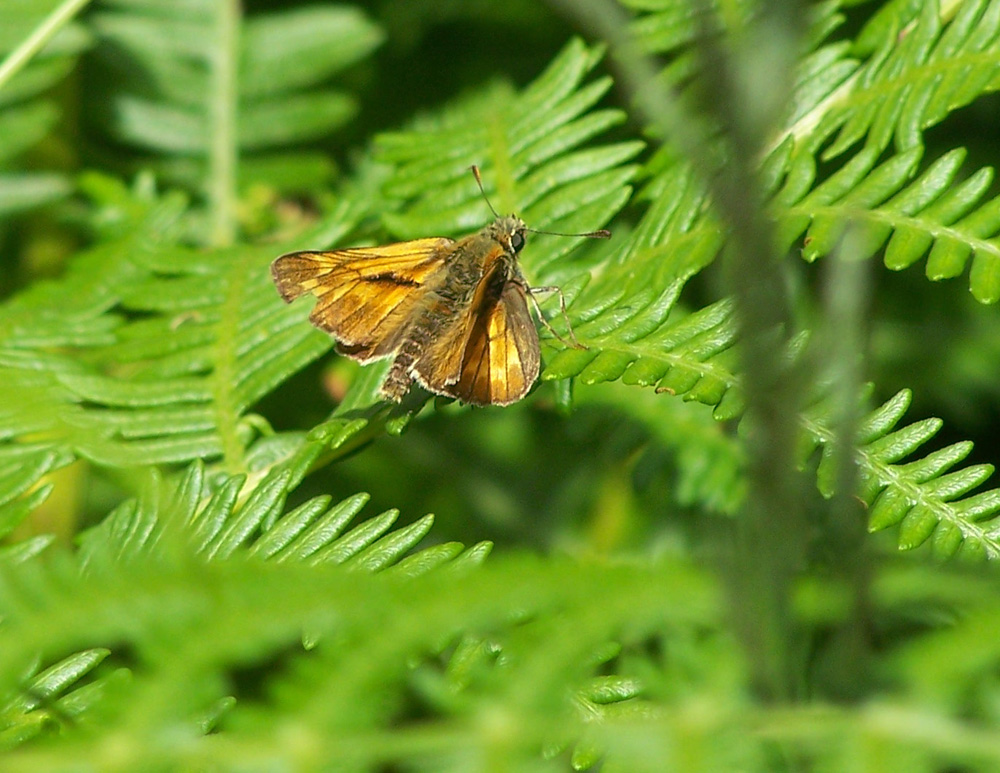 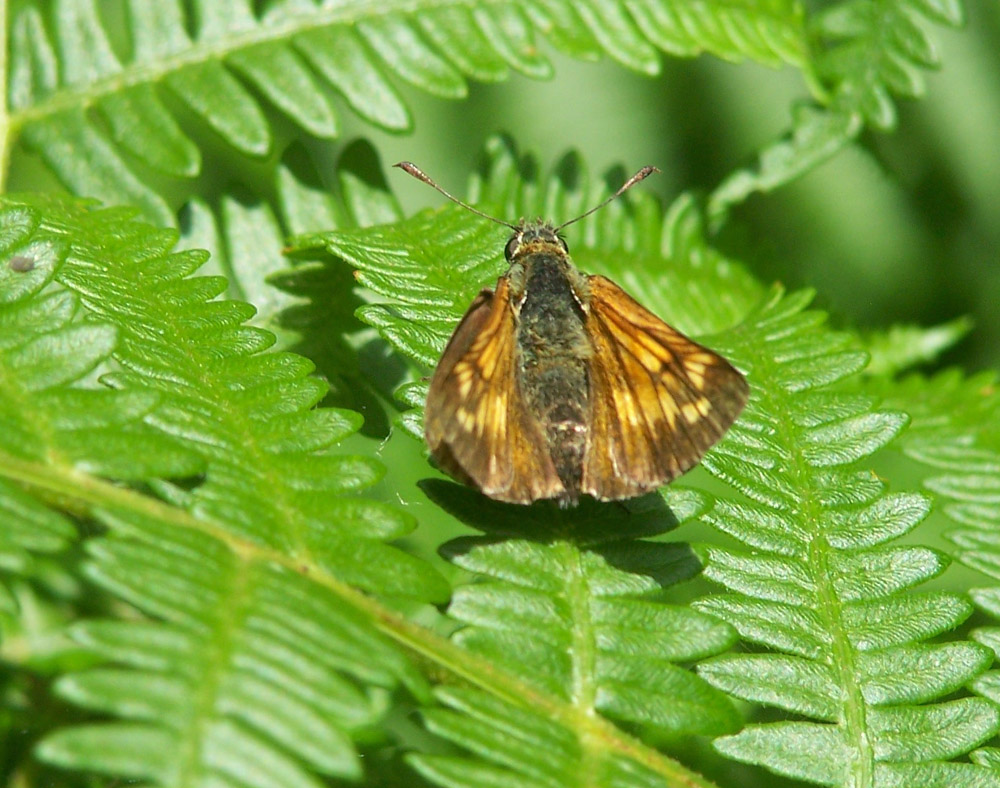 Lastly, I think we have a pair of Large Skippers, Ochlodes faunus? The male on the left, with the diagonal bar of scent scales on the forewing, and the female on the right, without them. I wonder what attraction bracken has for them? I have seen other photos. of these on bracken. To sum up, we had a very good three hours pottering about at Monkwood, and take off our hat to The Worcestershire Wildlife Trust and Butterfly Conservation, the joint owners of Monkwood. However, words are a cheap commodity, and I think I will have to send them a donation. During the time I walked on the major paths & rides, butterflies were to be seennearly all the time – truly vivid proof of the success of this venture. Indeed, at one point on a narrow path, and walking very slowly, I was nevertheless shepherding before me a cloud of at least eight Ringlets – and I think that in the current state of our butterfly fauna, eight butterflies does actually constitute ‘a cloud’ of them!

P.S. One curious thing happened today. Few people were about, but as I stepped aside and said ‘Hello’ to somebody passing, a small, white butterfly fluttered into a large sapling bordering the path. Could this have been the legendary Wood White, Leptidea sinapis? And for which Monkwood is famous? I waited for several minutes in case it re-appeared. All butterflies seemed active this day. But nothing happened. I jiggled one of the branches of the sapling without effect. Growing bolder, I reached in and wobbled one of the main ‘trunks’. A small, white butterfly fluttered briefly, and settled again, quite invisibly. Some time passed. I was hungry by then and wanted to get to a seat and eat my lunch. I wobbled the trunk again. A small, white butterfly fluttered briefly, and settled again, quite invisibly. Deciding that I really wanted only to see a Wood White, and not to torment one, I walked off. But I think I may have just briefly seen a sinapis today. If only that passer-by had not come at that moment! The were plenty of Small Whites, Pieris rapae, about: they did not hide in saplings, not a bit of it! They flew about with great abandon interacting with others of their kind. What small, white butterfly would persist in hiding in a sapling? Ah well: there are plenty of small white moths that would take refuge by day, if accidentally put up. Still, though July 3rd is a bit late for sinapis, you never know. It might have been a straggler. Such is Wishful Thinking! Well: there’s always 2011.