Will they emerge next Spring? 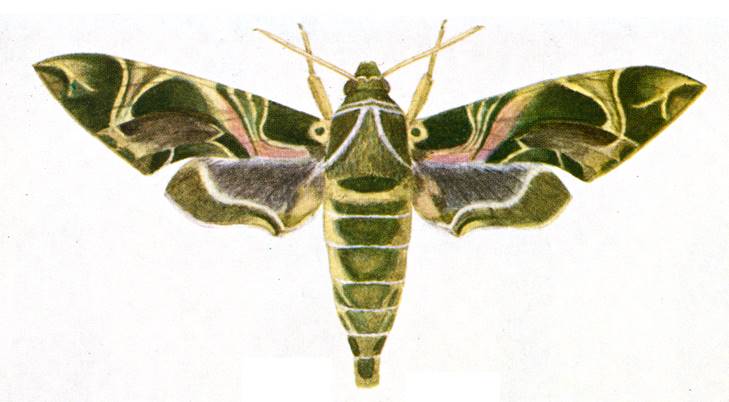 28th December 2016. By this I mean, will my four Oleander Hawk moths, Daphnis nerii, emerge from their pupae next Spring, here in the English Midlands? Their home territory is central Africa including Madagascar, parts of north Africa, along much of the Nile, and a huge range from Turkey, right through to India, Indonesia and the east Indies. And I am quite sure that there, they will proliferate abundantly, as always. At least I fervently hope so, as do we all. But they are also a scarce migrant to central and northern Europe and Scandinavia, it may be quite another matter for them to survive winter in these northern latitudes. We have already prattled on about the Oleander Hawk on the page lepidoptera.htm , and this Christmas, I received a most excellent present from my son and daughter-in-law, namely, no less than four pupae of nerii, obtained from World Wide Butterflies, a great establishment of fifty years’ fame. (Before proceeding further, we must record the fact that I have also received excellent presents from my daughter and son-in-law, so that if they happen to read this there won’t be a problem. <8^)   ) 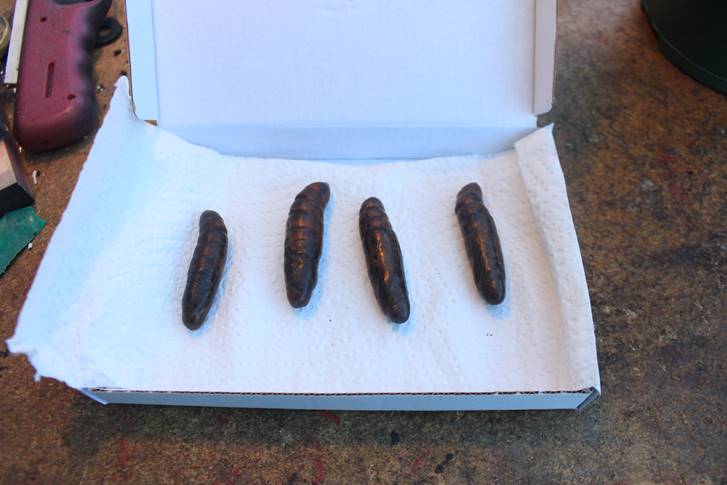 Here they are, having been carefully unpacked from the padded box in which they arrived. All are well, because even I know that a viable pupa feels slightly cool to the touch. Some pupae actually wriggle when touched, and I have experienced this – though with what species, I can’t recall. The nerii, however, did not react when moved about. The second from the left, being large, is probably a female. Distantly, the thought of mating and eggs comes to mind, but is immediately dismissed in view of the fact that female Hawk moths are capable of laying many eggs. Since Oleander and the main alternative food-plant Periwinkle is totally absent in this district, any chance of rearing nerii larvae is impossible. True, the larvae have been induced to eat Privet, but I have no Privet, and there is no time to grow any before the Spring. The instructions concerning nerii pupae on the World Wide Butterflies site tell us that they must be placed in fine compost, with the top just showing. (The top end or the bottom end? No, no – no – no, no – the top SIDE just showing – not one end of the pupa, Field, you silly!) The compost must be barely damp, certainly not wet; but equally, not be allowed totally to dry out, lest the pupae become dessicated also. This assembly should be maintained at a temperature between 10°C and 15°C until April 2017, when they may be brought out, ready for emergence. 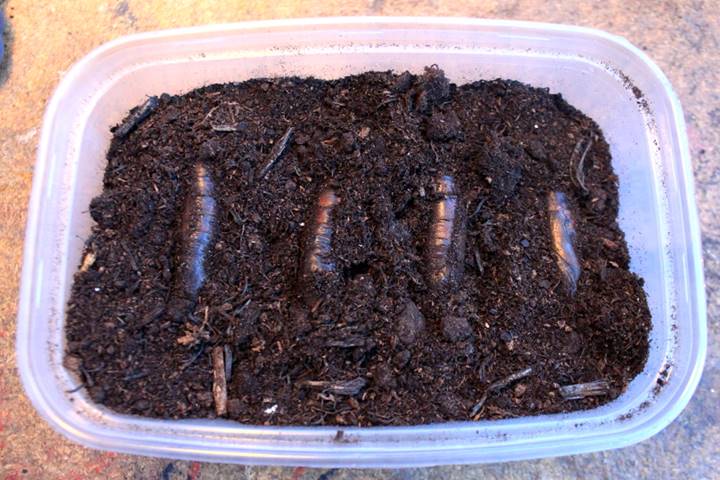 Here we are. The compost was baked in the gas oven for about 40 minutes at around 100°C, in the hope of sterilising it, thus killing mould spores, bacteria, viruses, the eggs of parasitic insects, mischievous sprites, ill-intentioned minor demons and all that sort of thing. After it had become cool, it was placed in a plastic tray, and the pupae dug in. At this stage, they may be a little cramped; but that can be looked at in several months’ time. All we needed now, was a suitable place in which the tray could repose. The cupboard under the stairs soon came to mind. 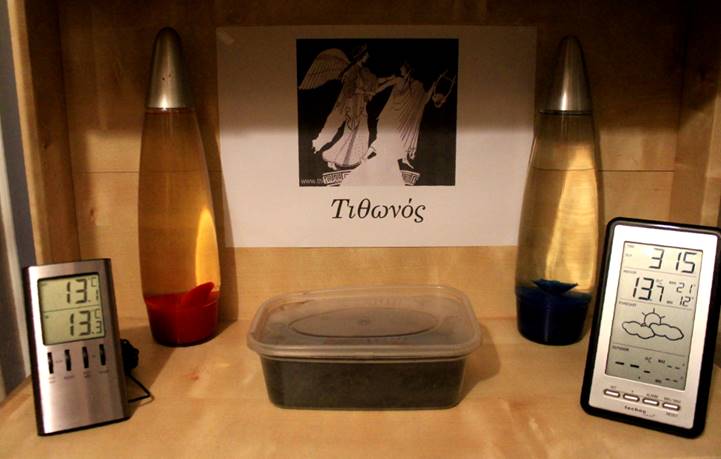 A small shrine to Tithonus was prepared (what with him being the God of Insects), and the tray, loosely lidded, placed therein. Flanked by two currently redundant lava lamps and a couple of thermometers, the one on the left being a maximum and minimum type, we must admit that we have given our nerii the best start we can; and its appearance, I think, is tolerably pleasing in its own right. This Pupa Storage Facility will be regularly monitored. We can now only wait and see. Lastly, it occurs to us that more than once, we have begun web pages in which we promised an update – but this never occurred. I must apologise for this, but also point out that just because an update has not appeared, does not necessarily mean that the project failed & was abandoned.

Of course, I cannot promise you an Oleander Hawk that remotely rivals the first one to be found in England. We are told in Volume I, p.52 of South’s ‘The Moths of the British Isles’, (Warne, London, 4th Ed., 1961) that the first specimen known here, captured in 1833, possessed a wing span slightly over five inches – that is, close to 12 centimetres! Even granted that those were gentler times, this is a staggering size. It was found by a lady in her parlour in Dover; perhaps her tape measure had shrunk in the wash? 8^)   But nonetheless, we will do what we can. In the meantime, Happy New Year 2017!