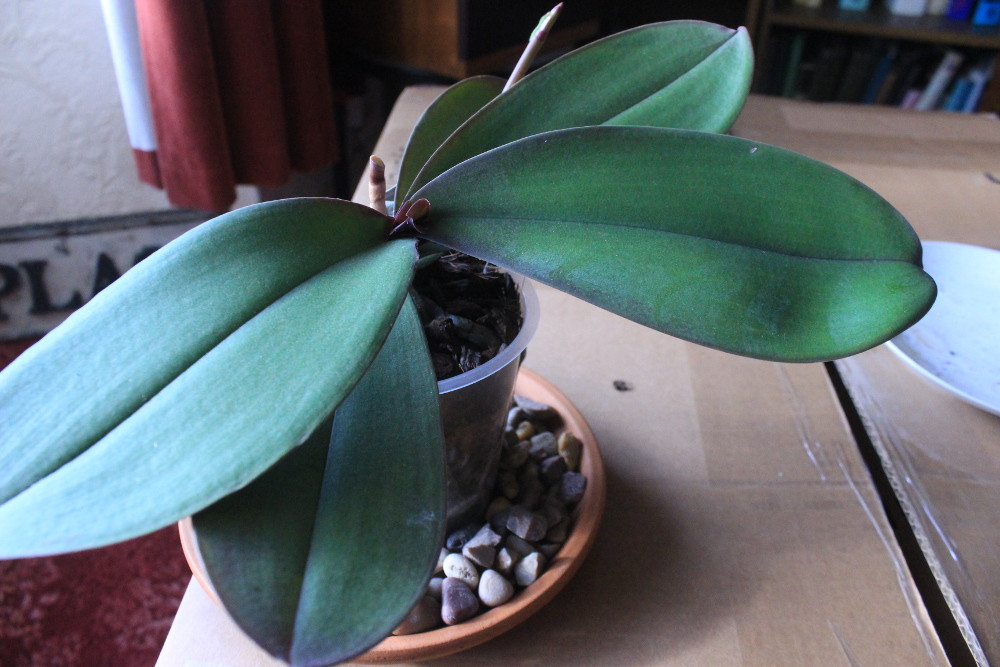 2nd October 2016. Above you see an Orchid of the group (or whatever it is) Phalaenopsis, otherwise known as the Moth Orchid, presumably due to the shape of the leaves. It is my Orchid, the only one I have ever owned. My daughter and her husband kindly gave it to me quite a few months ago. It had a large & gorgeous flower spike with beautiful lilac flowers, which lasted for a very long time – probably three months. Then, they gradually dropped off, leaving the bare spike. What would happen next? The Internet was consulted. One was advised to cut off the spike just above the second node from the bottom. Under favourable conditions, a new spike might grow from the node below the cut; or, later, an entirely new spike might grow. To my delight, a few weeks ago, I noticed that a new spike was indeed starting to grow. Great was the rejoicing, as you can imagine. It grew more quickly as time went by, and this morning, I noticed that it was about 6″ (15cm) long. I was out for most of the day, but on returning, took another look at the orchid. 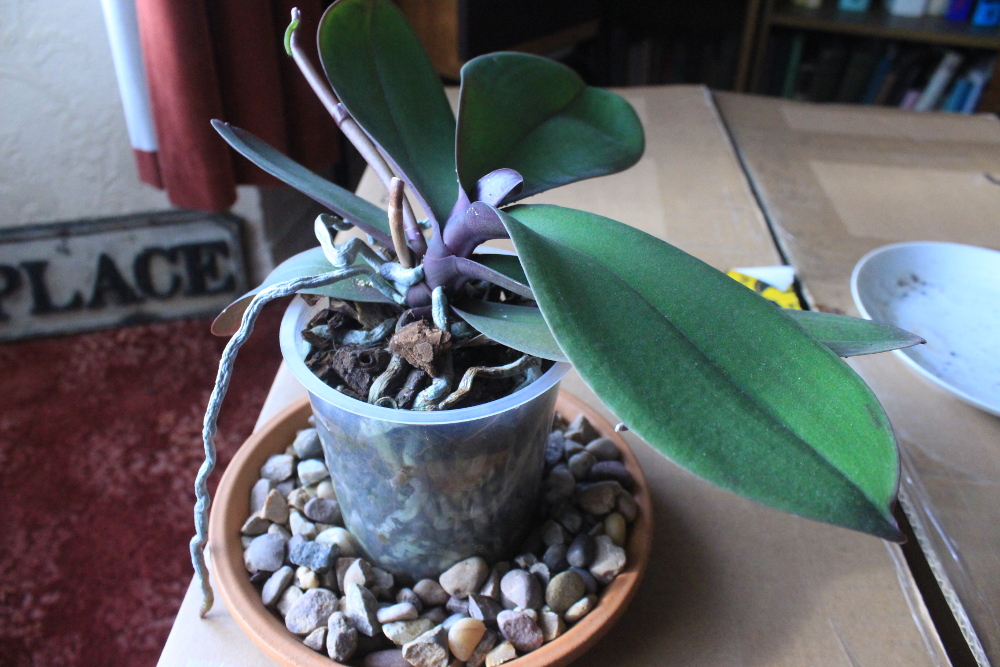 Here is another view of the plant, turned away from the light. You can see one of the aerial roots, and that a new leaf is also starting to grow. The old spike is clearly visible, as is the new one, its tip just below the top of the image. But stay! Something is wrong with the tip… Anxiously, we made a closer inspection, and discovered that an appalling attack was being made on our Orchid! 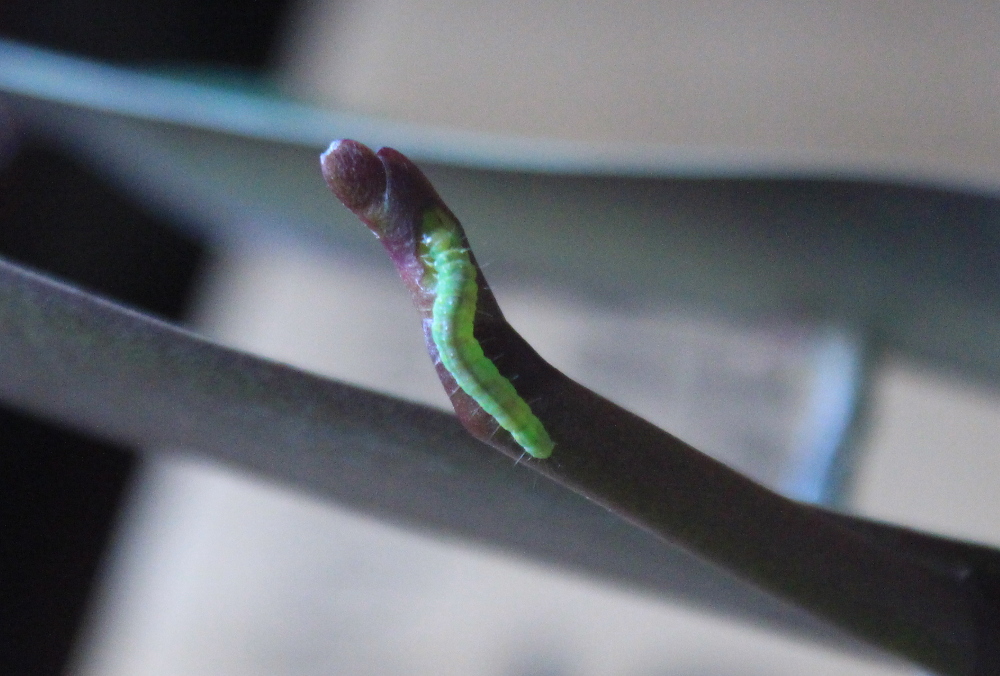 A CATERPILLAR was eating the tip of the spike! At first, my reaction was simply one of consternation. But this was soon supplanted by ever-increasing anger. The anger began in my ankles, swiftly mounted to my knees, rapidly passed up through my body, until it reached my brain – by which time it had become an all-consuming, paranoid megalomaniac frenzy of truly atrocious intensity! Even though, elsewhere on this site, there are pages in which the larvæ of Lepidoptera may be seen to be hatched, reared & cossetted by me, all this was swept aside in a fraction of a second. This VILE GRUB was EATING MY ORCHID! It was condemned out of its own mouth, so to speak. Never mind that the leprous egg from which this Emissary of the Devil had sprung might have lain dormant in the compost of the orchid until a few days ago; never mind that the egg might have been transported here from the tropics; never mind that the hatchling might be the very last individual of a rare species of butterfly or moth. Its doom was sealed. Squish, and the larva was no more. 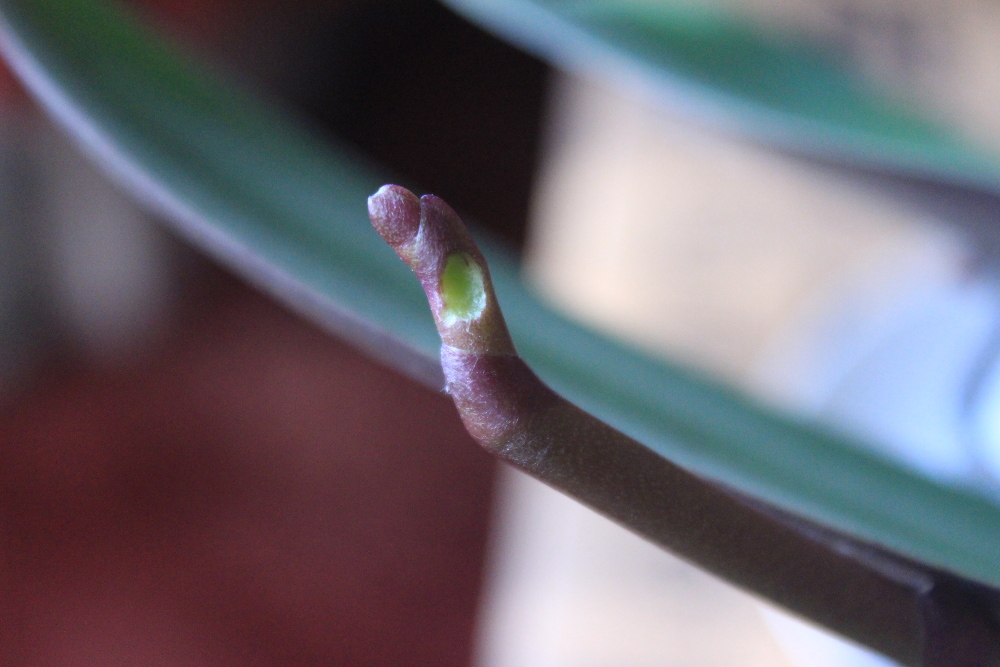 Oh, for pity’s sake; look upon the ghastly wound this fiendish beast has inflicted on my defenceless Orchid! Still, I have been lucky. Suppose I had not made a cursory examination of the plant on my return home? The caterpillar was not there this morning. Had I left it overnight, it would undoubtedly have consumed the entire tip of the spike. We had planned not to train this spike upwards, as is usual, but let it take its natural course – which, rather naturally, is downwards, gravity being what it is. Perhaps it will all work out OK. We can only wait. >8^ ( 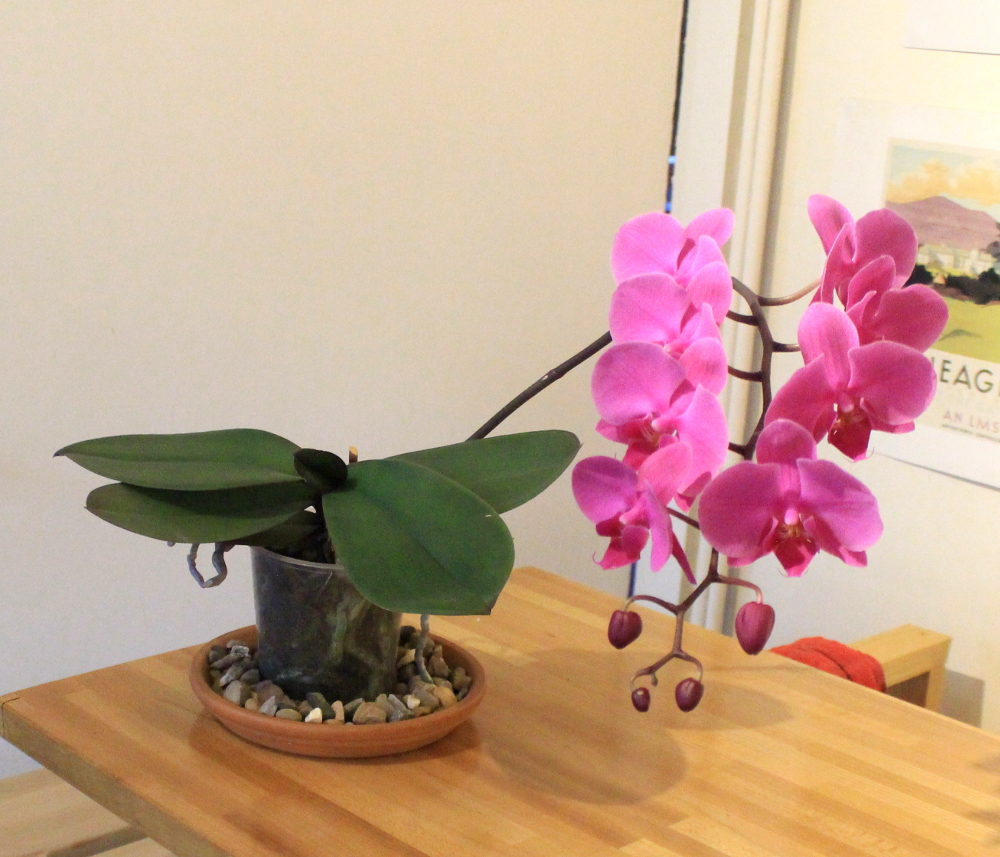 30th December 2016. We are pleased to report that, as you can see, the spike continued to grow in spite of the caterpillar’s attack. “We got there just in time!”, as President Ronald Reagan once said.

Around mid-September 2016, my daughter asked me to check out her orchid. After flowering very well for a long time, it had begun to wane & decline. As we were rapidly becoming an enthusiastic amateur on orchids, we readily undertook this task. We had already learned, when researching whether our own orchid needed repotting (they seldom do), that it is the habit of the growers to use sphagnum moss as a shipping medium. They do this because that moss holds water very well, and so the plants won’t be short of water while they are transported all over the world. However, the natural habitat of most of these tropical orchids is in the crevice where a branch springs from a tree. Such a crevice will usually contain only very coarse material, such as fragments of bark, bits of leaf-fibre &c. A very open, well ventilated medium. Air can get at the roots; even some light can get at the roots, &c. Pack the roots in dense wet moss, and the plant will flower, but eventually the roots will start to rot because they are too wet & oppressively enclosed. The ‘underground’ roots are green when they are fully watered, and become white when they are dry. This is why orchids are – or should be – kept in transparent pots, so that the roots can easily be inspected. As you see above, my daughter’s orchid has very green roots, and they are tightly packed in moss. I imagine the growers think – or at least hope – that the wholesale buyers will take out the moss & replace it with proper medium? But this seldom happens, I would think… 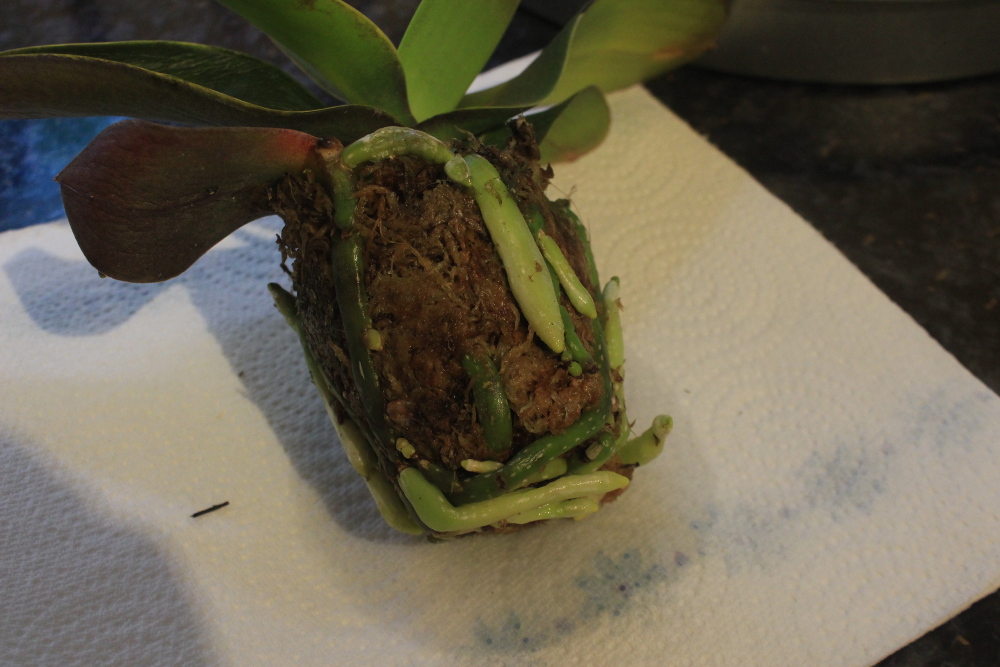 We picked out all the moss, which was saturated, because we had watered the plant when we first got it. You don’t water from the top; you immerse the transparent orchid pot, which has holes or slits in it, in water for a few minutes. Then take it out & let it drain, then you’re OK for a week or two, or until you see the green roots are going white. No panic; wait until the roots are mostly white before watering again. 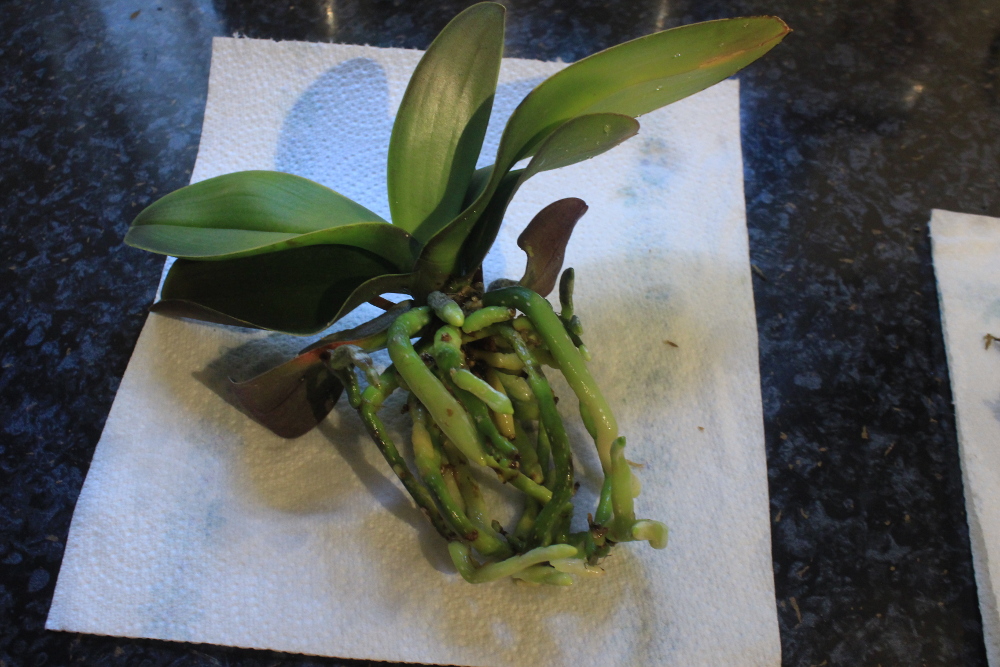 Here’s the plant after all the moss has been got rid of. It has a superb collection of well-watered roots, and, happily, none of them have begun to rot & shrivel. If any have, that doesn’t matter; just cut them off, and as long as there are some healthy roots, even two or three, the plant should recover when put in proper orchid medium. 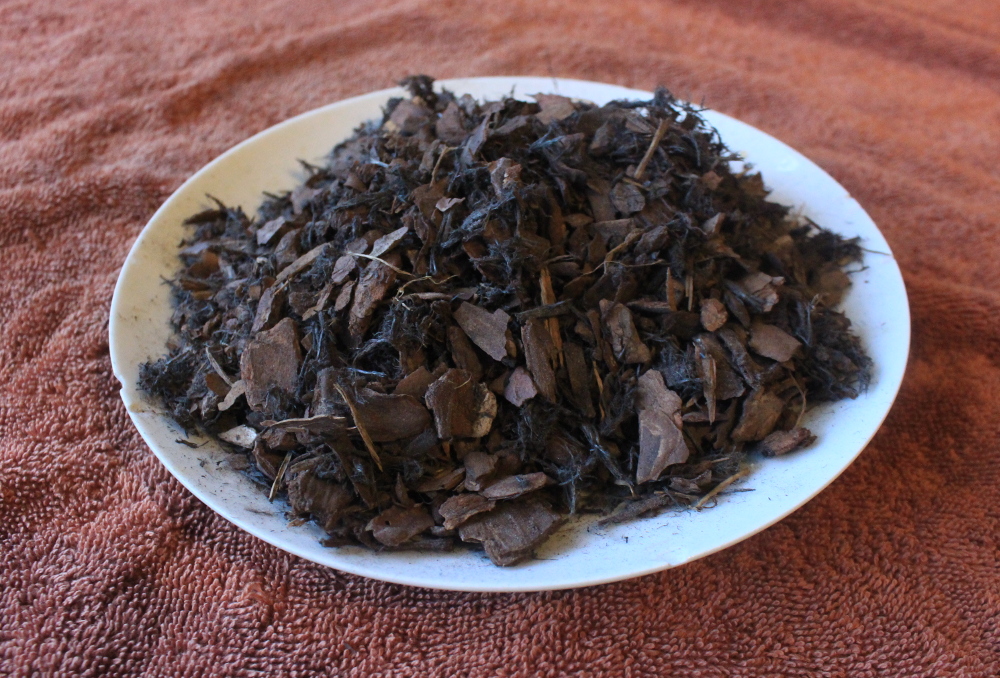 Orchid growing medium is very cheap; in fact, it wouldn’t surprise me that it is, in some cases, it incorporates ‘floor sweepings’ of some horticultural suppliers. Bits of bark, coarse cactus compost, odd bits of dried leaves, fibrous shreds of whatever plant: those are exactly the sort of things that would collect in the elbow – or armpit – of a tree branch in a tropical forest! 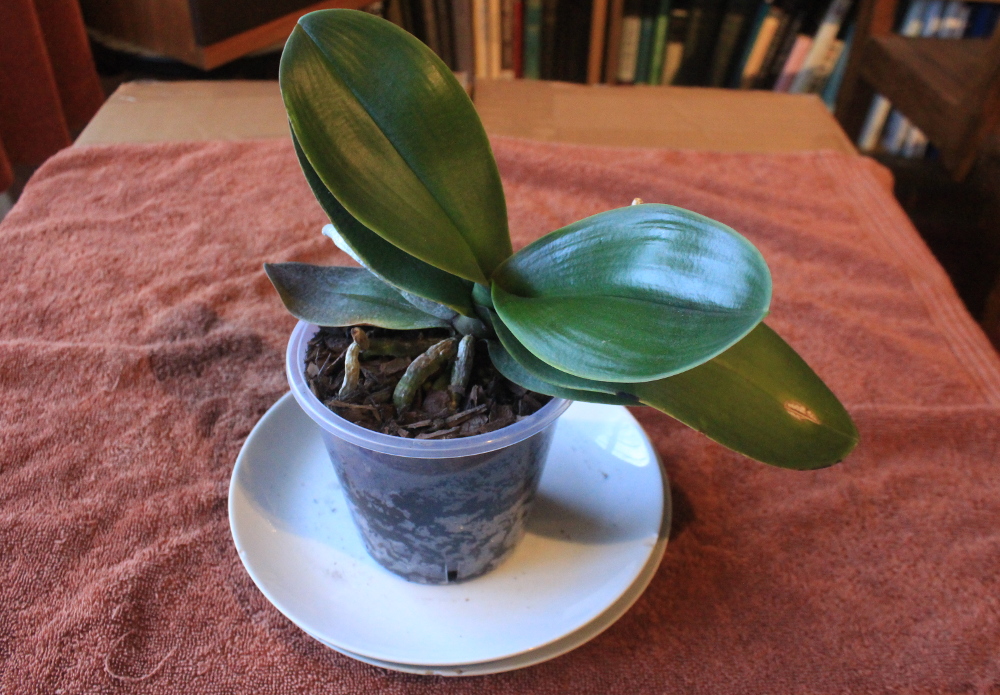 Alas, I did not take a photo of the plant as it was to start with. But within a fortnight in the correct medium, the orchid was transformed. As you can see, it has generally perked up, and has actually begun to grow. A nasty patch on one leaf has healed considerably, and even the two bottom leaves, which I nearly cut off as hopeless, are looking much better. 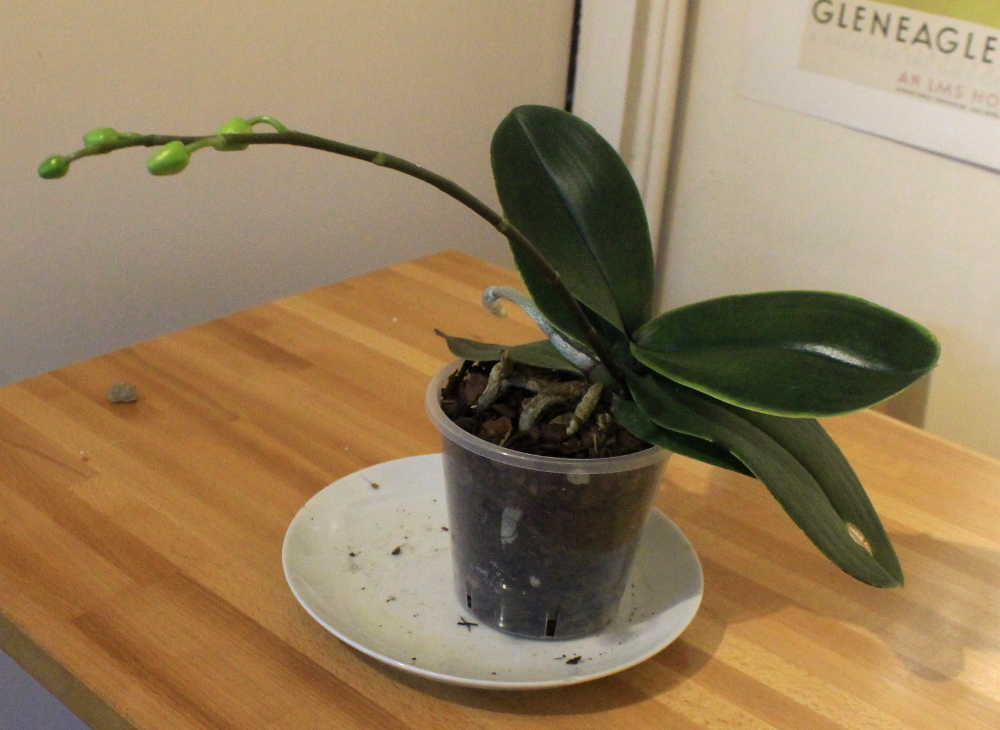 30th December 2016. This orchid must already had already flowered twice, as the bases of the spikes attest. Now happy in its proper medium, it has put out a third spike, which will probably flower in a week or two. It’s true there aren’t many buds on it – but the plant is up & running again, which is the main thing. 8^)