Alas, I have no proper image to show you, of what we will relate here. For a start, I had no camera with me; and in any case I was a passenger in a car travelling at 50-odd miles per hour when I made the sighting. So it only lasted for 3 or 4 seconds; 5 at the most. So I trawled the net, and tried to find an image that corresponded somewhat to this sighting, which occurred on 25th October 2012, to copy by way of substitute. Alas, black panthers it seems, for whatever reasons, are exceptionally iconic; so there are practically no photographs or images of them online that have the slightest resemblance to black panthers in their natural habitat, wherever that is. I have had to fall back on the ludicrous expedient of attempting a drawing of what I saw from the car window. 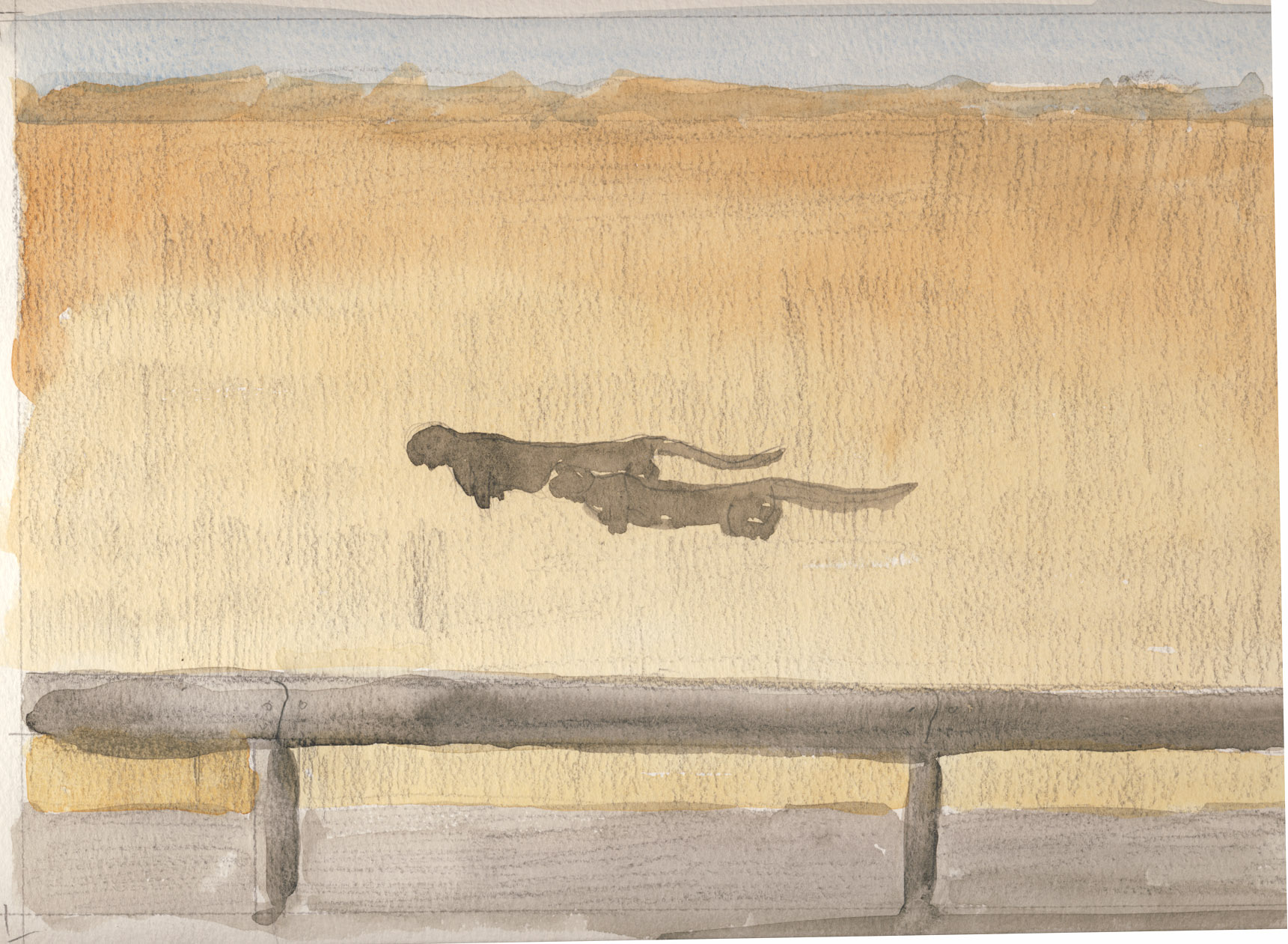 Now hang on: let me get this fair & square. This is not actually what I saw, simply because I can’t remember exactly what I saw. At the front, I’ve tried to draw the crash barrier, but I don’t know whether there was one or not; but it serves to indicate that we were on a motorway. Also, there might have been a low hedge, but can’t remember. However, we were definitely higher up than this, but I can’t draw anything from higher up, or anything at all, as you can plainly see. Also, the tail of the nearer one is much too thick; you can see where I’ve ‘gone over’. Also, the hollow back of the nearer one has been ‘gone over’ too much. The point I’m trying to make, is that this is, effectively, what I saw. Two black creatures, walking together, slowly and purposefully, through long dried grass. They were both the same size, and were close together; and one was slightly in front of the other – not as far as I have sketched: more like just head & shoulders, but I can’t be bothered to draw it again, even if ‘practice makes perfect’. * What I can do, though, is to provide you with a very close location for this sighting. 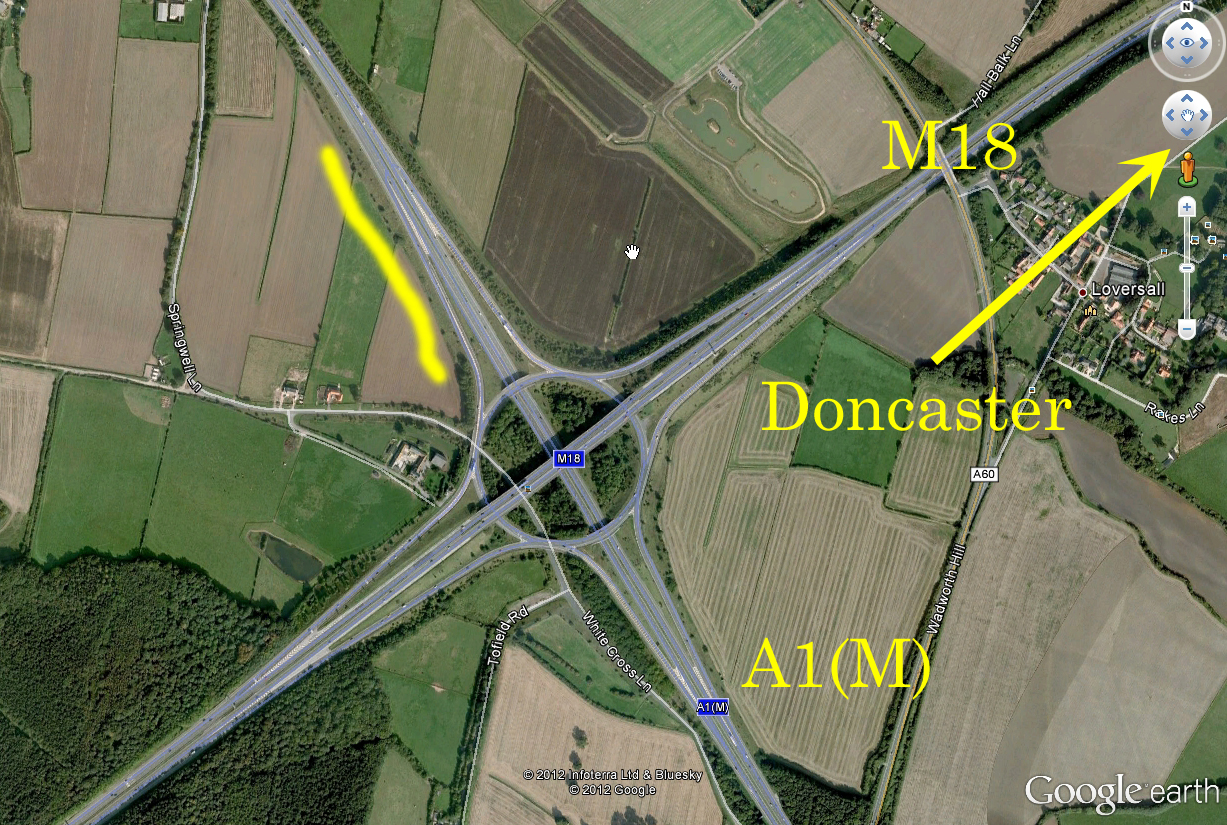 The fuzzy yellow line indicates where the sighting occurred. I’m pretty sure that it was while we were just coming off the slip-road, but can’t be certain. So there you are. All you crypto-zoologists out there, take note. Incidentally, I did google around a bit & found that black panthers (and at least one leopard) have been seen in this district, the leopard associated with Cusworth Hall, a little to the north from this spot. And in case anybody thinks I am bonkers, or was drunk – it was only about 11:30 am – reference to dozens of these boring ‘Diary’ web pages will prove to you that I am, even if I say it myself, a reasonable observer of the natural world. Oh, of course at first I thought they were two large black dogs… but no dogs I have ever seen have the supple, deliberate gait these creatures had, or the hollow back, let alone the characteristically curved tail that gives that unmistakable ‘double curve’ profile of a cheetah, a leopard – or a black panther, let alone two. Big dogs walk; these big animals paced, as cats do. 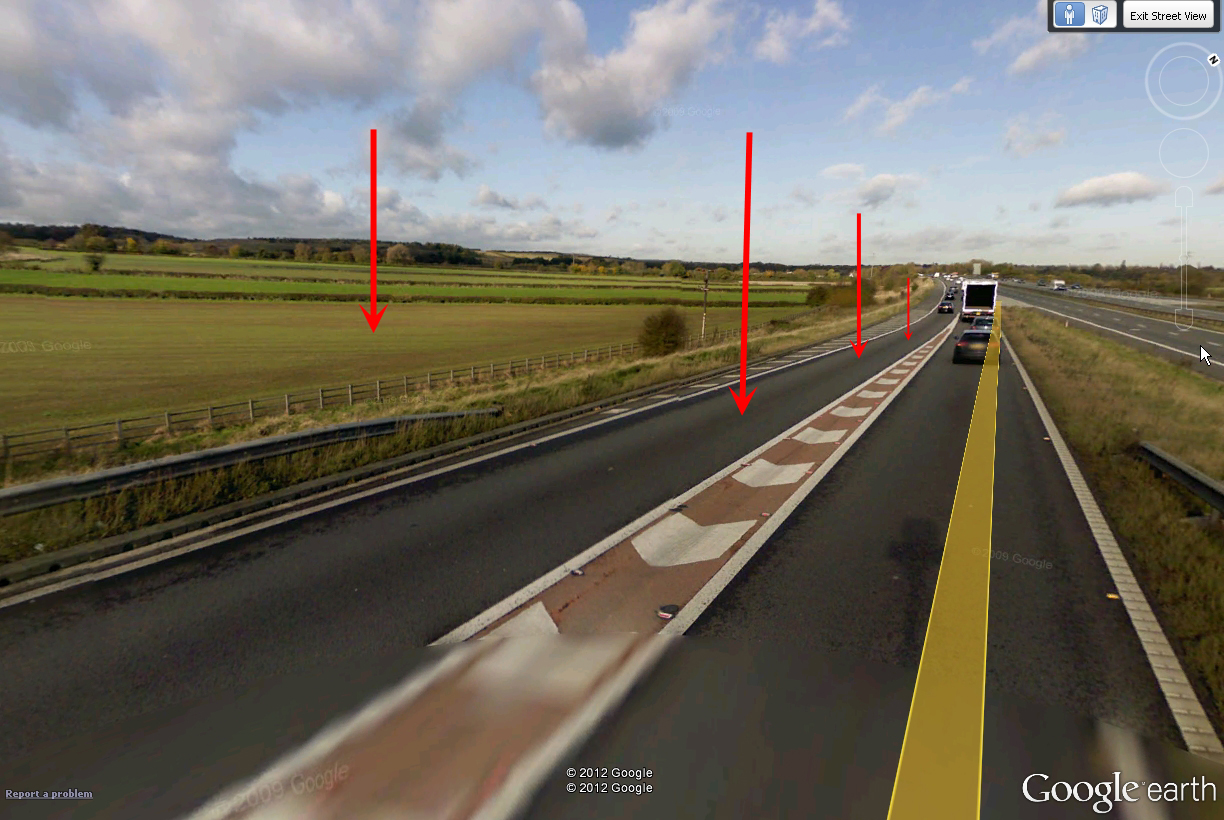 Later, it dawned on me that Google Earth would let me show you more accurately the place of sighting, and here it is – the slip road from the M18 descending onto the northbound A1(M). The red arrow in the field indicates the vague location of the creatures, while the three others indicate where the car might have been. The field is the first of the three visible on the satellite shot above, and I am now rather certain that this is the correct one, as I definitely recall looking down on them.

* By chance, I later happened to read an article on the behaviour of certain ‘big cats’, and found it is very common for a single young female to remain with its mother for an extended period of time, even until young adulthood. They walk together, the daughter following the mother, head and shoulders behind.