Why are they so hard to find? 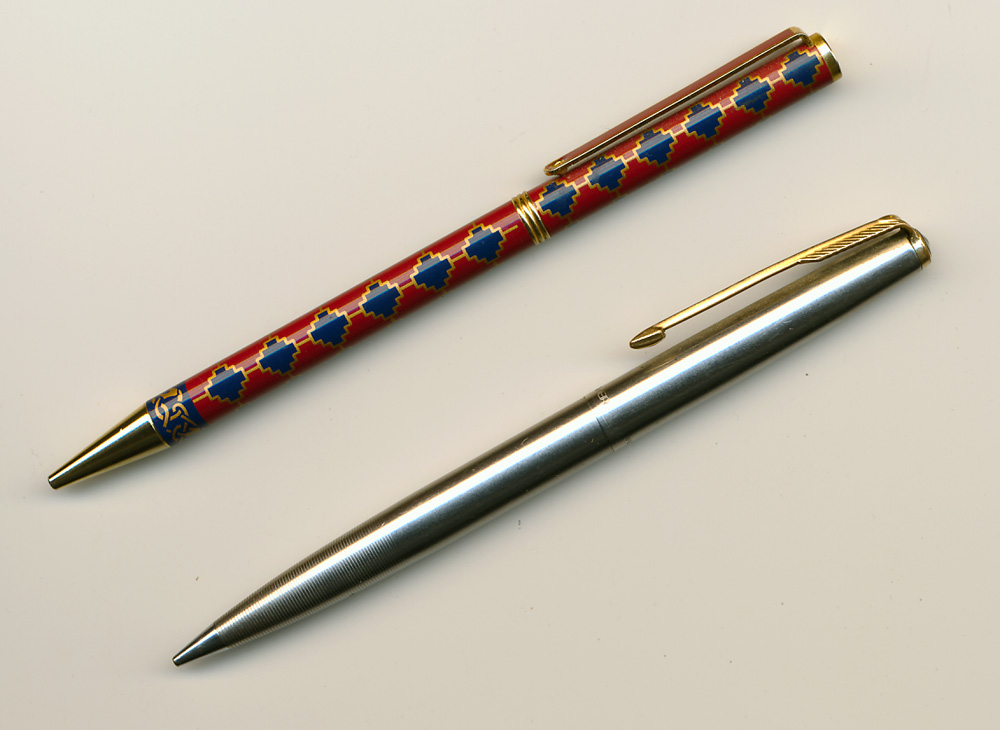 17th April, 2009. Probably most of us, who are no longer as young as we were, have the odd propelling pencil lurking about somewhere? I just have the two illustrated above. The upper one is quite recent; it was part of a ball-point pen & pencil set sold by Past Times, and I only bought it four or five years ago. I still have the companion ball-point pen, and the ink has not yet run out. But I liked the pencil very much, so used it extensively. As a result, the leads supplied with it were used up. The pencil languished in one of the jam-jars on my desk in which I keep writing implements &c., as you see below: 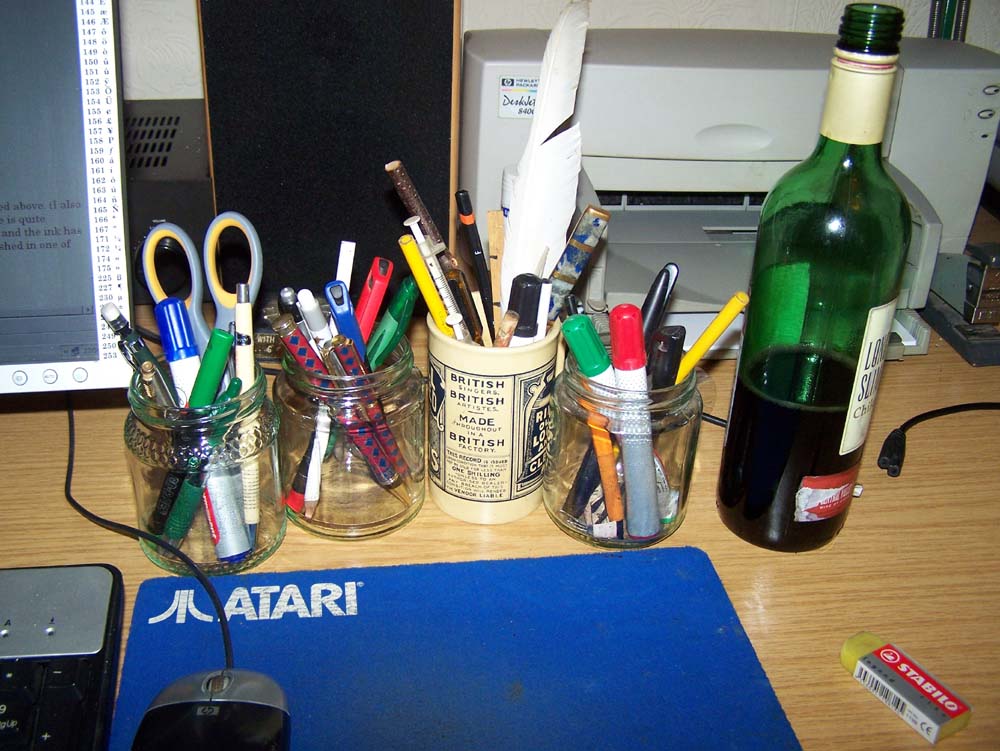 Oops… there’s a bottle of wine in the shot. Well, that qualifies IMHO, as a writing implement, if not used to excess! The Parker pencil in the top photo. is rather older. I was given it in (I think) 1971; it was again part of a set: fountain pen, ball-point and pencil. It was part of a leaving present from a company for which I had worked for about 8 years. (How I managed to survive that long, working in Industry, beats me.) Anyhow, I used up all the leads in that, and may have bought some more long ago, but can’t remember. At any rate, that Parker pencil too, has languished here & there for – gulp – 37 years. All that sort of thing is now past, and as I am supposed to be ‘semi-retired’, time has become available for ‘doing things long neglected’. E.g., obtaining new leads for these two propelling pencils. And that is where the ‘Great Pencil Lead Mystery’ began!

The point is, today we have 0.3mm, 0.5mm, 0.7mm and 0.9mm leads available (most of them in a wide variety of grades) from any number of suppliers, all of whom are anxious to solicit our patronage.

BUT!!! The two pencils illustrated at the top of this page use a lead which is rather larger. I tried putting my 0.9mm leads in them, but they just fell out. So I searched on the Internet for leads of, say, 1mm diameter. These could not be found. To be sure, I found many comments on discussion forums about The Quest for the 1mm lead. But they all tended to peter out in uncertainty. More than one correspondent advised the use of the readily-available 0.9mm lead as a substitute. Having already tried this, unsuccessfully, I marvelled at the naïvety of these commentators; but doubtless they were motivated by the fundamentally good principle: ‘Any advice, however ill-founded, is better than none at all’.

Once, though, in those early days, I did see, on eBay, an ad. for 1mm leads. The seller described them as ‘rare’. That seller was absolutely correct, and I now kick myself for not buying them there & then. What I did do, was to search for other leads, rather larger than 0.9mm. I found that there had been, for many years, a very famous kind of propelling pencil called the ‘Yard O Led’. This used 1.18mm leads. I took this to be the ‘old British size’, and ordered some of the ‘B’ grade from a supplier. This supplier had, quite reasonably, a minimum order amount of £10. I therefore bought three tubes of ‘B’ grade Yard O Led leads, which cost £12. Unfortunately, they were too big to fit into the two pencils illustrated at the top of this exceedingly boring web page.

(a) I still needed to find a source of 1mm leads for my two pencils. I searched the Parker Pen website, but they do not seem to offer 1mm leads. I wrote to Past Times, from whom I had bought the other pencil, only about 5 years ago. They replied, very politely, that they were sorry, but they did not have leads for this pencil. They helpfully suggested that I should try asking for them in a stationery shop. Grrh!

(b) I also needed a pencil to use up the £12-worth of 1.18mm leads we had bought. Knowing that they definitely fitted the famous ‘Yard O Led’ pencils, I searched eBay for such a pencil. It was discovered that there are very many of these. They existed over a long period and in a great variety of forms: round, hexagonal, square even. They were made in solid silver, in gold plate, rolled gold, rhodium plate, &c., &c. I don’t doubt that there are some in solid gold. Accordingly, they are very collectible, and may not be obtained under thirty-odd pounds.

We bid on several Yard O Led propelling pencils without success – unless you admit the vicarious satisfaction we derived on ‘driving up’ a number of bidders from e.g. £25 to £37? In any case, coming second in an auction is always an agreeable prelude to coming first… Accordingly, we are happy to report that we finally won a Yard O Led pencil for £34. It’s a square one; this seems a relatively unusual section. Some of them are cylindrical, but most of them are hexagonal as far as I can make out. So at last we will be able to start using the immense stock of leads we hold for this type of pencil. Look! Here it is, together with a sample of my chronically deteriorating hand writing (this was the fourth attempt to write this without some grievous error, and even then, the ‘e’ in ‘below’ went wrong. I put it down to (a) drink, and (b) the ill-considered use of roller-ball pens – surely an invention of The Devil Himself).

Still, this success is much like ‘using a sledge-hammer to crack a walnut’. All we really wanted, was to obtain leads for pencils we already possessed, rather than to purchase a relatively expensive pencil in order to use up leads we had mistakenly purchased.

The fundamental problem of obtaining 1mm leads for the Parker and Past Times pencils remained. So, to pass away an hour or two of spare time, I wrote this web page. It had only been uploaded for a few days when to my surprise and pleasure, an email arrived from Italy. It was sent by Emilio Acerbi, who had almost immediately found it. He kindly informed me that on eBay, under a certain number, was offered 1mm pencil leads, and that in addition, the vendor had an eBay Shop which offered a very extensive variety of pens, pencils, writing impedimenta plus inks, ball-point refills &c.

We at once sped to the above page, and found Rotring 1.0 mm offered at a reasonable price, as long as you made the minimum order value, which was no problem. The following soon arrived: 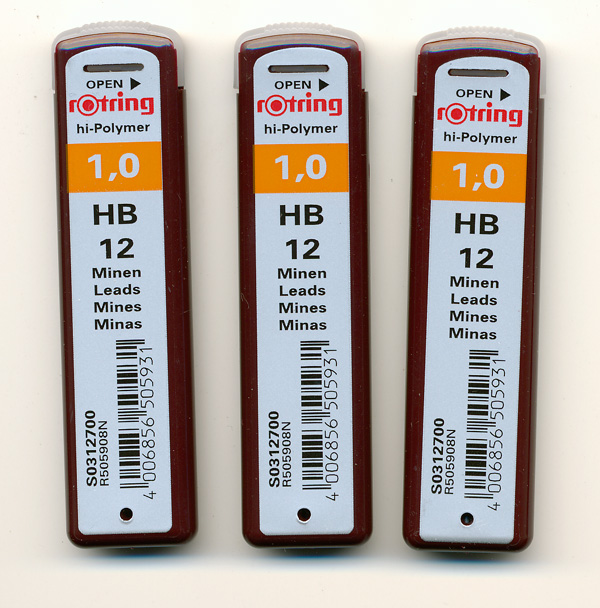 They fitted the pencils fine! End of My Quest. Mind you, some dedicated people have gone to great lengths to circumvent the problem by themselves. They have ground down 1.2 mm leads to fit 1 mm, and others have gone to the impressive length of coating 0.9 mm leads with a substance of their own devising (a clear varnish perhaps?) which increases their diameter to 1 mm so that they will stay in the pencil. This coating, when you write, simply breaks up and has no effect on the writing! Of course, you can’t just coat the end of the 0.9 mm lead to hold it in place inside the pencil, because the ‘writing tip’ of the lead, being 0.1 mm smaller, will rock about as you write. It may not seem much, but I tried it & it was not at all good to have a ‘wobbly’ lead.

Finally, it is clear than when we are forced to it, we will not rest until we can use our treasured old (and not so old) propelling pencils again. I was lucky, because I am not clever or patient enough to manufacture or create my own: Emilio kindly told me where to get them.