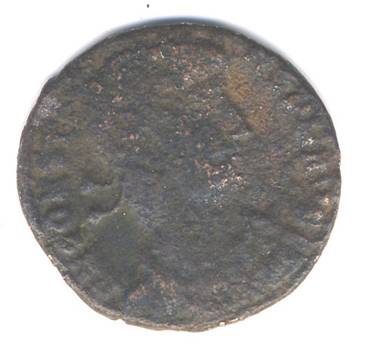 Sunday 23rd December 2007 – but starting sometime after circa 300 A.D… Ah! Christmas approacheth fast; this morning we finished the last of our shopping for groceries to sustain us over the next few days. Mind you, our local mini-supermarket displays a notice saying that it will be open from 10 a.m. until 1 p.m. on Christmas Day; most commendable. I could, perhaps, do with another jar of olives, and some sun-dried tomatoes; but there is yet Christmas Eve to come, and I shall be travelling tomorrow morning (by ’bus, naturally), to the annual Christmas Eve Booze-up… er, ahem: I mean the refined & wholesome Traditional ‘all-comers-welcome’ Jazz Session at The Malt House pub in central Birmingham, the most excellent ‘Jazz Bandits’ being the host band. So I could pop in and get last-minute groceries en route. We are currently enjoying a few days off from the life of a ‘musician-errant’ (I won’t be offended if anyone inverts that phrase), which is great, because the last week has been very hectic & I’m 64 years old in a couple of weeks. However, to get to the point… I was slightly irritated when I put my wine-glass down on the coffee table, and it rocked dangerously and came near to spilling some of the precious elixir. The cause was a small coin which was lying on the table. I thought it might be a penny or some other odd current coin of the Realm which just happened to be there. Reaching out to get rid of it, I saw that it was actually a small Roman coin. Now I used to get coins of various sorts, and fix them with epoxy onto blank cuff-links. Making such simple (and cheap) cuff-links was a harmless pastime, but also a very constructive one.  It’s quite surprising how often people will turn up to a distant gig in casual travelling clothes, then, when donning their dinner suits & wing-collar shirts, find that they have left their cuff-links at home – or perhaps they only have one cuff-link, which is even more annoying. It has happened to me many times over the years. Indeed, I recall one instance, at Hexham in Northumberland, when I played a gig with my cuffs held together with Blu-Tack: the local newsagents had no paper-clips, and none of the other musicians had any spare cuff-links. Later that day, before the evening gig, I bought a really nice pair of Celtic-design cuff-links from the souvenir shop in Hexham Abbey, and they lasted for a couple of years, but finally disappeared. Mind you, I think they cost ten or twelve quid – a highly significant portion of the gig fee. No: the long-term answer to the problem of cuff-links was to make your own cheaply, and so have many pairs freely available at all times. You would keep a few in your clarinet case, or in the glove compartment in your car, &c. So you always had some; and if anybody else didn’t have any, you could actually give them a pair, and say: ‘No, please keep them – it’s nothing, honestly!’

Living in Birmingham has quite a number of advantages, and one of them is the shops in the Jewellery Quarter. They will sell you things like bags of 100 cheap blank cuff-links for ten or twelve quid. So you have fifty pairs of cuff links! You just need to have something to stick on the end of them with epoxy resin. Small coins were an obvious thing to use. I started with farthings, which you can buy at any coin fair very cheaply. I had four sets of farthing cuff-links, viz. Queen Victoria, Edward VII, George V, and George VI. I can’t remember on what gigs I wore the Queen Victoria and Edward VII ones, but am perfectly clear that I wore the George V (1910 – 1936) on ‘Classic Jazz’ gigs, where the music was essentially of the 1920s; and the George VI (1937 – 1952) on ‘Trad.’ or ‘New Orleans’ gigs. I was most punctilious about that ‘proper chronology’, daft as it must sound to you, dear reader!

I admit I used to polish the coins – which will greatly distress any numismatist who may read this -; but I can assure such numismatists that the coins so treated were of no value, and still exist in their tens & hundreds of thousands, nay! millions: undefiled, & still very cheap. 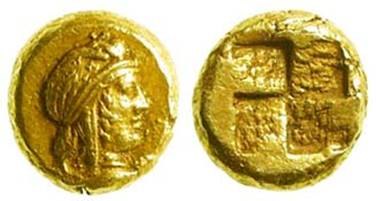 At least, this does bring us slightly nearer the purpose of this page. Eventually, farthings seemed a little ‘commonplace’; so we cast our ‘cuff-link net’ wider. Inevitably, ancient coins became the desideratum! But surely, you may ask, ancient coins must be very scarce these days? Not a bit of it! That is, as long as you don’t insist on e.g. Greek gold coins of several centuries B.C. in immaculate condition. For example, above is a Greek gold coin I just trawled off the web – I’m sure the vendor won’t mind – which is in EF condition. It dates from about 450 – 400 B.C. and only weighs 2.7 grams; but is still US $1650 – about £830. Also, I know that gold is very dense, and it doesn’t tell you what the diameter of the coin is. But I also know that early Greek coins were relatively thick, so it probably isn’t very big in diameter & so mightn’t make a very good cuff-link, which is great really, as £830 is quite a lot of money. If you are prepared, as I was, to accept very ordinary ancient coins, there is no problem. It seems that Britain is particularly rich in ancient coin hoards. Small inconsequential bronze coins from the Roman Occupation are amazingly common – and hence cheap. The Roman Occupation of Britain lasted roughly from er… 43 A.D. to about 450 A.D? (he said, evasively); but which is anyway a Very Long Time, and so many millions of SIBCs * must have been sent here (or even minted here – I don’t know) during that time. And there are lots of them still knocking about, and you can buy them for as little as 50 pence each! Ones that cheap may not be in very good shape after 1,600 – 1,900 years, but who cares? You’re holding a direct link to those far-off times! Does not this fire your imagination? Who designed the coin? Did they design both sides? Who cut the dies? Who stamped the blanks out? Who bagged them up? Where did the bag go first? Who decided where the bag should then be sent? Who received it? Who disbursed the coins? Who first received them, and why? What did they purchase with the coin(s)? Who did they purchase the stuff from? What did the recipient do with it? How long did it stay in circulation, & how many people had it also? How did it get lost, and where? Who dug it up? The mind truly boggles… 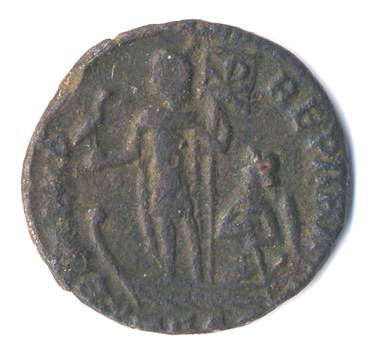 So here we are. Above you see the reverse of the coin that nearly upset my wine glass! It is in better condition than the obverse at the top of the page. Heaven knows what the actual coin is. But I can see that the figure holding the bird in their right hand also holds in their left, a banner bearing the X-P (Chi-Rho) symbol – the Greek ‘Christos’, and this tells us that the coin dates from after the adoption of Christianity by the Roman Empire. Which was er… about well: let’s say no earlier than the early part of the fourth century A.D., OK? The Emperor Constantine I was supposed to have declared Christianity the approved religion of the Roman Empire, wasn’t he? He reigned from 306 – 337 A.D. (A very long time by then-current standards for Roman Emperors). But I really don’t know. It’s about 18mm in diameter, though as you can see, it’s not actually perfectly round. The main point is, that the essays we had to write – or ‘compositions’ as they used to be called when we were at primary school so many years ago, would at some point invariably include one called: ‘A Day in the Life of a Penny’. We were supposed to use our imagination to write about the scenario of the penny coin we had paid as our ’bus fair to get to school. Who had had it before, what would happen to it after we had it; and all that sort of thing. Even in the 1960s, there were still some well-worn thin pennies that had the date just still visible, & I recall seeing some that dated to the late 1860s; so they had been kicking around for 100 years. But how much more challenging to deal with a coin that has been around for over 1,600 years! Even if it did spend most of that time buried in the ground… Still, the Christian symbol on this Roman coin ties in with Christmas, which is the day after tomorrow, so it’s very good really.

Briefly reverting to cuff-links, it’s much more difficult to have pairs of cuff-links with Ancient coins, simply because you need two examples of the coin to make a pair. So you had to settle for two contrasting – but hopefully complementary – items. My favourite pair for a couple of years, was (a) a silver denarius of Vespasian (died 79 A.D.), and (b) a silver-dipped bronze denarius of Julia. I don’t know which one of the many Julias she was, but it was from quite a long time later, say around three hundred years after Vespasian, and time had certainly taken its toll. Vespasian’s luxuriant small (but thick) silver denarius of the first century had evolved – or rather degenerated – into a thin bronze coin, merely dipped into molten silver to give it the appearance of value. I don’t know what happened to that pair. I probably left them in a hotel bedroom somewhere. Still, they symbolised in a crude way a culmination & a subsequent fall, and isn’t that what life always consists of?

Finally, why was this little Roman coin lying on my coffee table? Why was it not attached to a cuff-link? Well, the answer is prosaic in the extreme. I gave up wearing wing-collar shirts a year or so ago. They are so fiddly, and the bow-tie keeps getting tangled up with the saxophone sling, and it’s very embarrassing if your bow tie falls off in the middle of a solo &c. So I bought six new white shirts, with button-down collars, for band use. And they have button-up sleeves so you don’t have to wear cuff-links with them. And the last few cheap Roman coins I bought just kept kicking about on the coffee table; then I moved house, & three of them have disappeared – just this one was left.

But I must admit, I rather miss cufflinks. For instance, I would have liked some pairs incorporating small silver coins of late Imperial Russia: say 1900 – 1917. That period of history has always fascinated me, and..

Oh; all right then. But just for now, mind you…

Page written 23rd December 2007.
Re-formatted 30th October 2017. Though why I bothered perpetuating all this rambling, I have no idea!