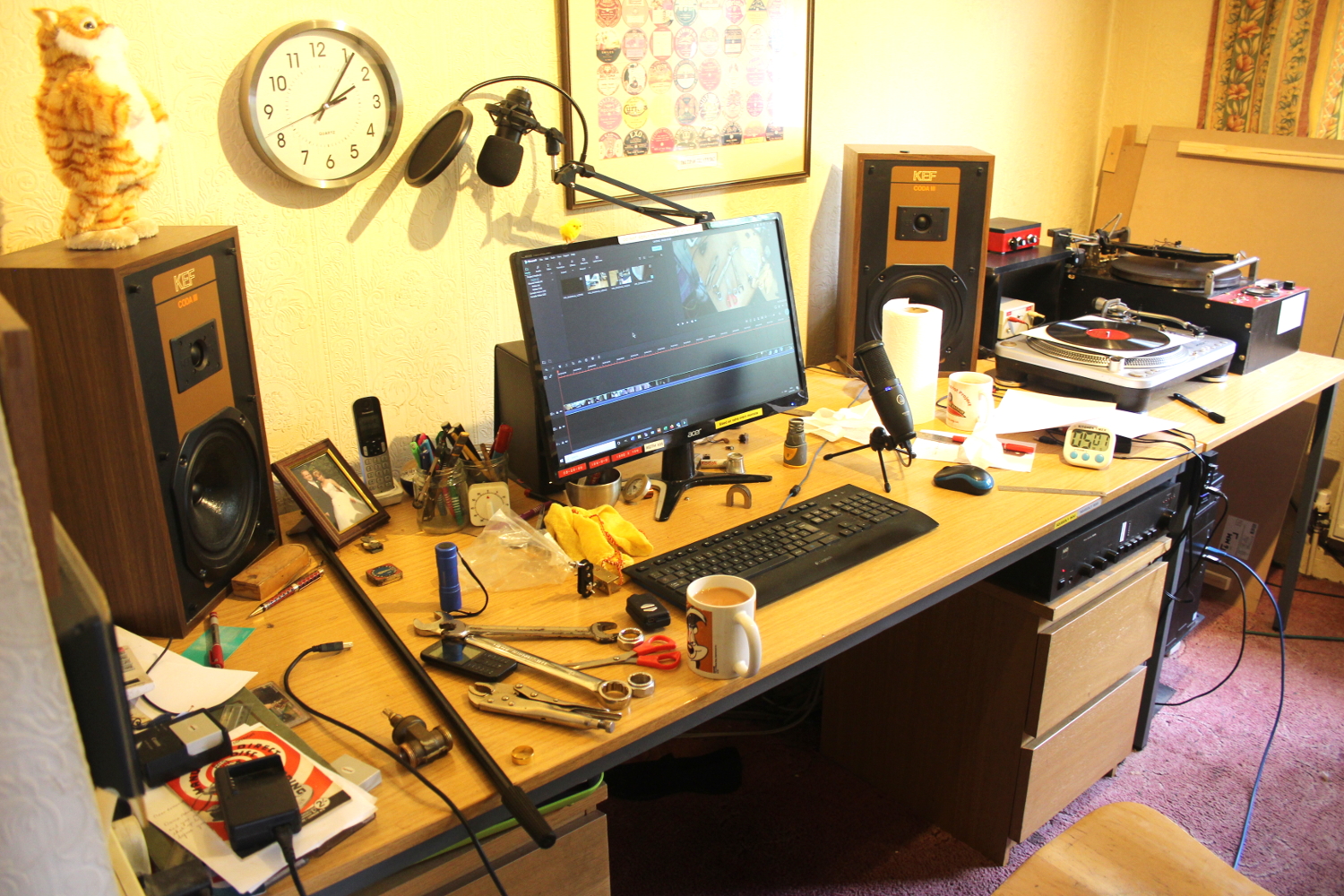 This is my workroom, study or ‘den’;  call it what you will. But a catastroscope – sorry, a catastrophe, happened on Monday afternoon. Water suddenly began to drip from the ceiling of the kitchen which is directly below the workroom. We turned off the water with the main stop-cock. But the dripping grew worse! Clearly, the fault lay in a pipe which came from the cold water tank… 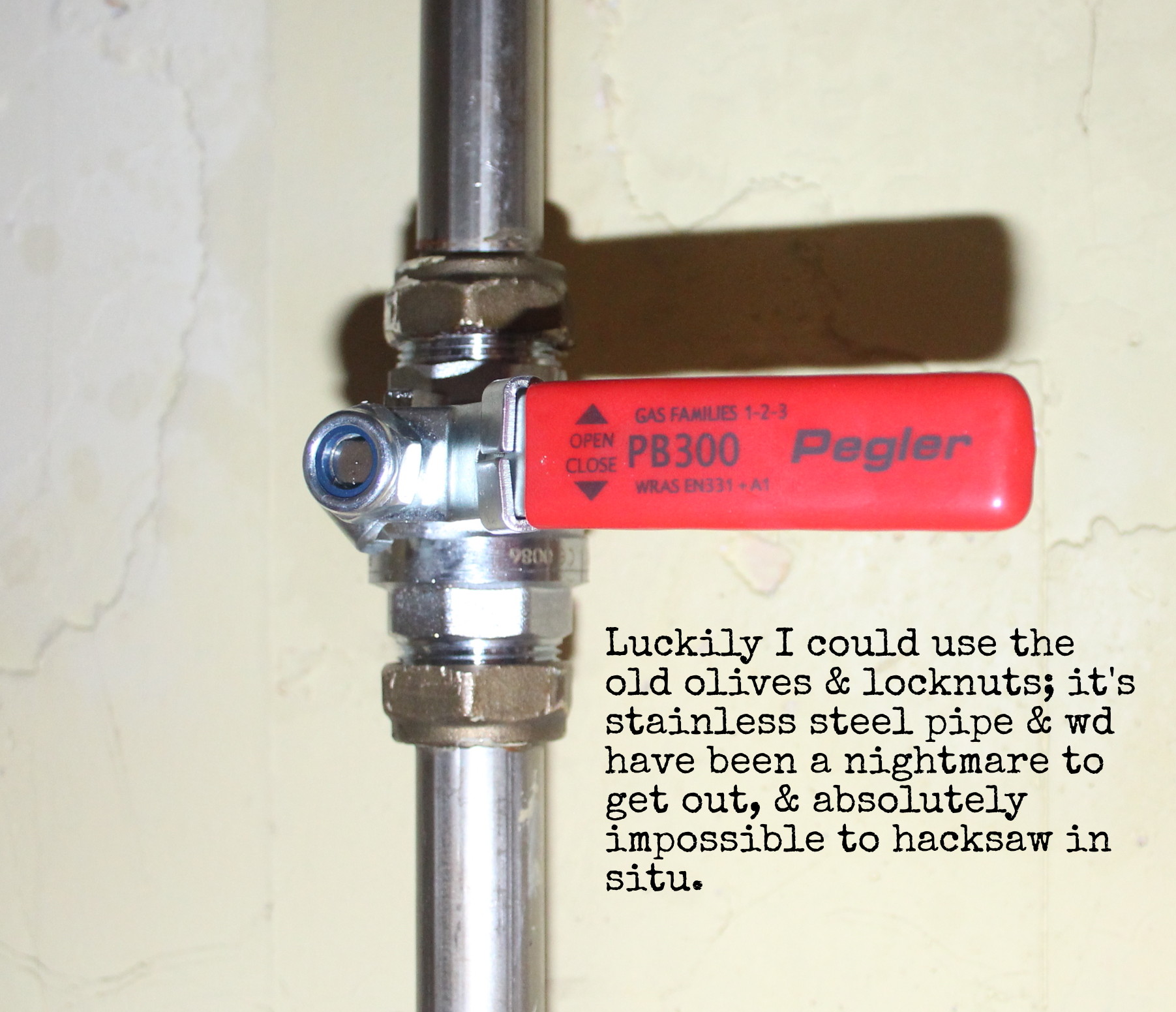 We rushed to turn off the exit stop-tap of the cold water tank. Only to remember that it was totally immovable, and had always been so, since we moved into this house in 2007. We thought it probably didn’t matter. And it didn’t, for 13 years. Garden hose & buckets were called into action, & we siphoned the water out of the cold tank. All was then calm, so we called it a day for Monday, but on Tuesday sallied forth & fitted a new ball valve, seen above, so we could turn the mains on again. (The cock controlling the ingress of water to the tank was working OK & had been closed.) 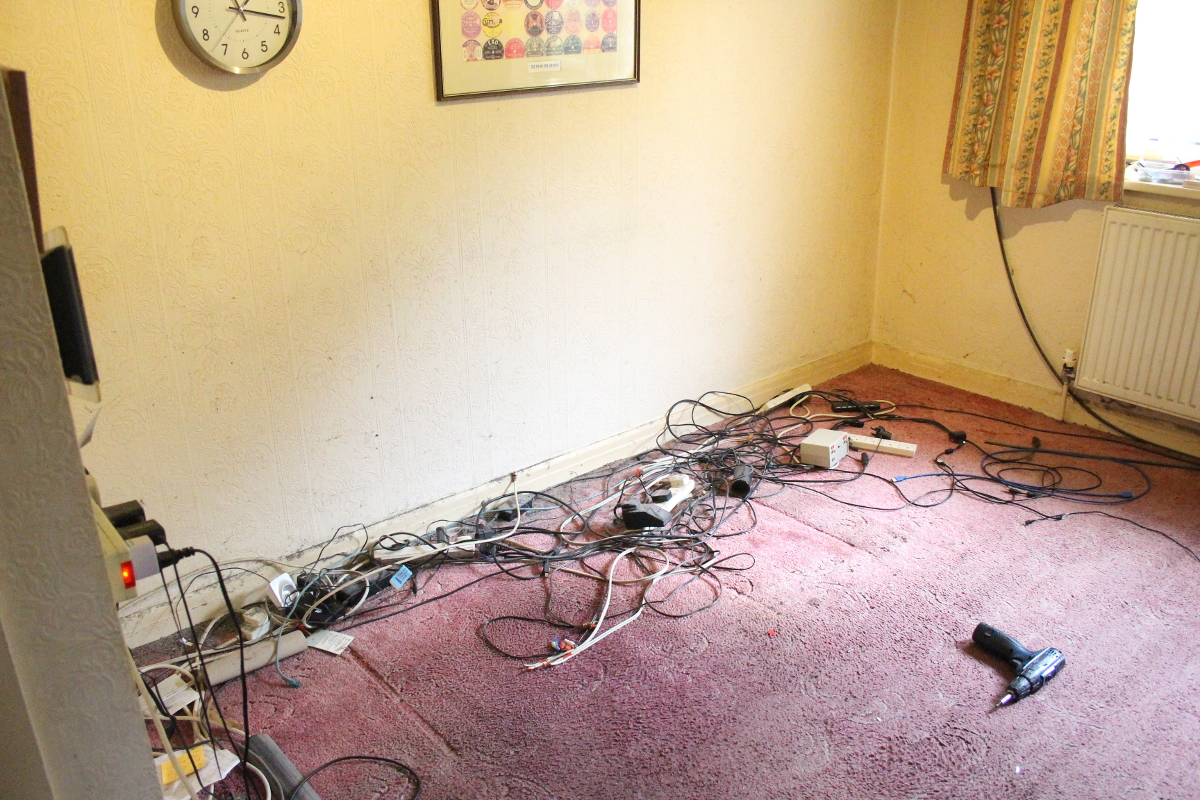 Wednesday. Great Heavens! What an enormous lot of plugs, leads, power supplies &c are needed to have a PC & a few peripheral things… The tables were easy to dismantle – just as well, as they can’t be got out through the door. 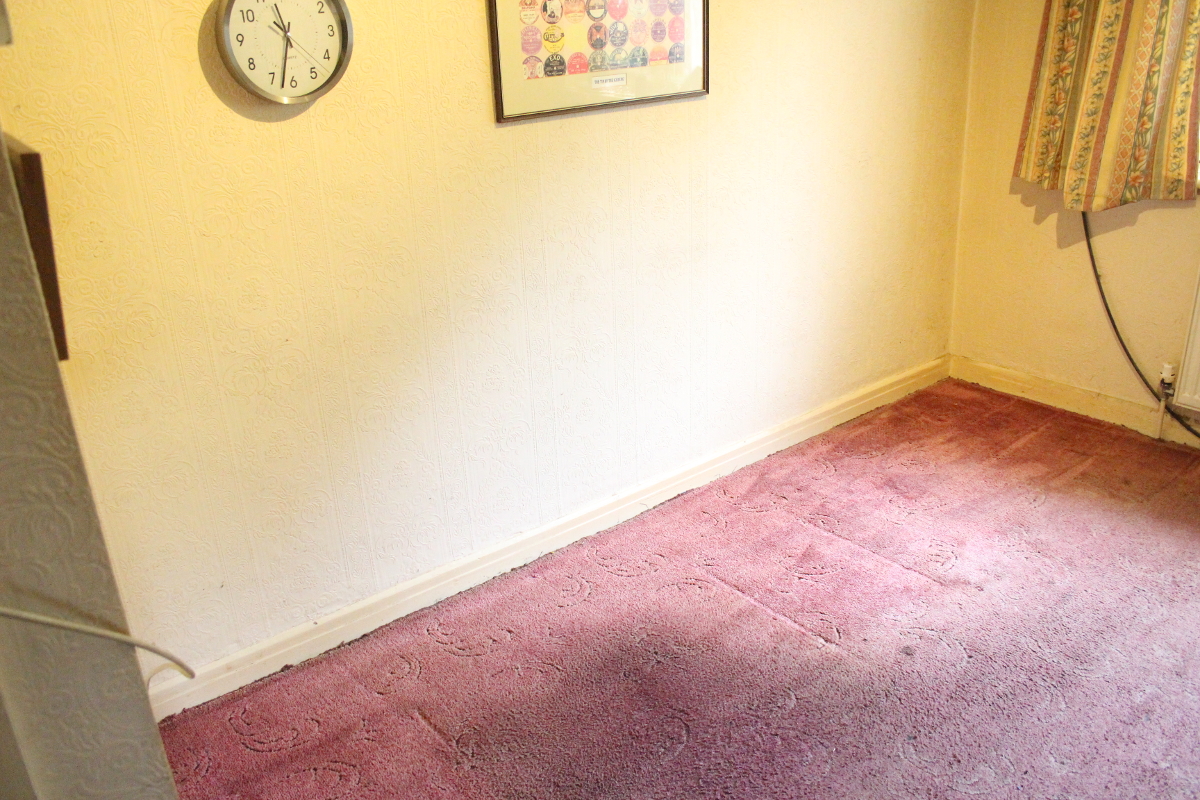 The deck is now clear for action… 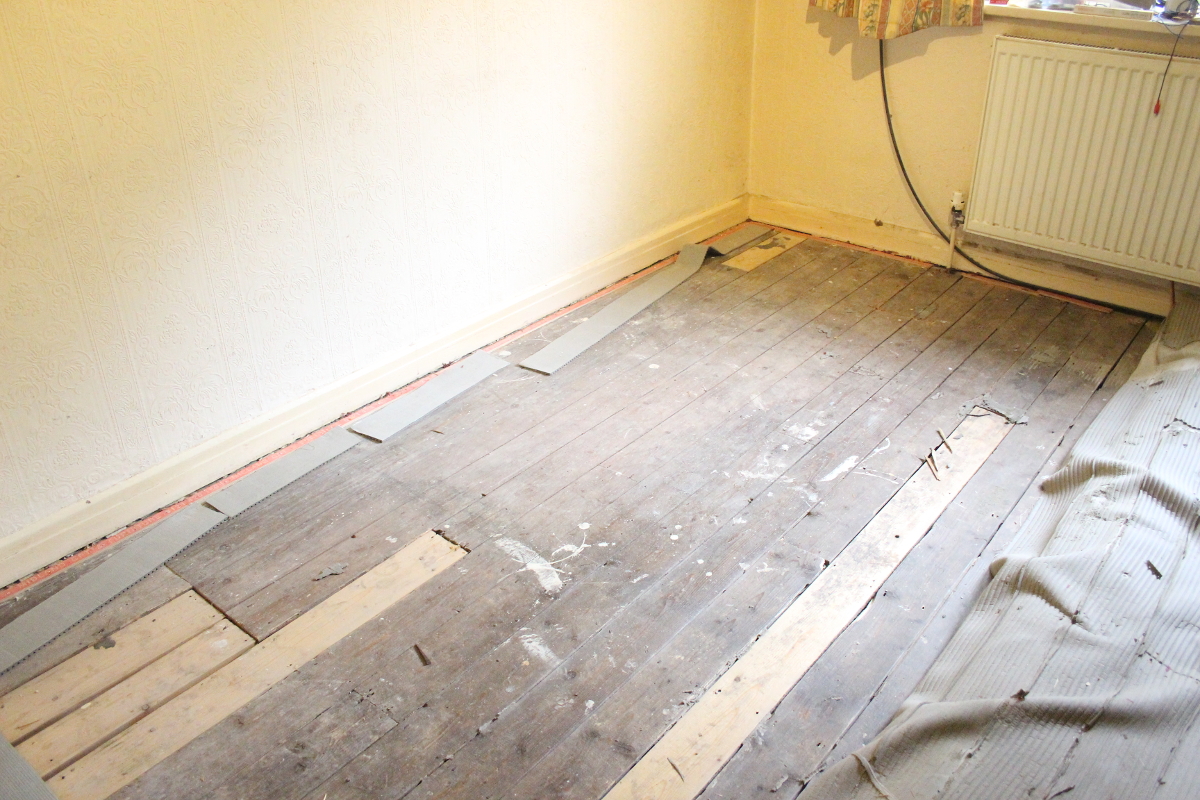 The floorboards are rather battered & weathered; mind you, the house was built 90 years ago. 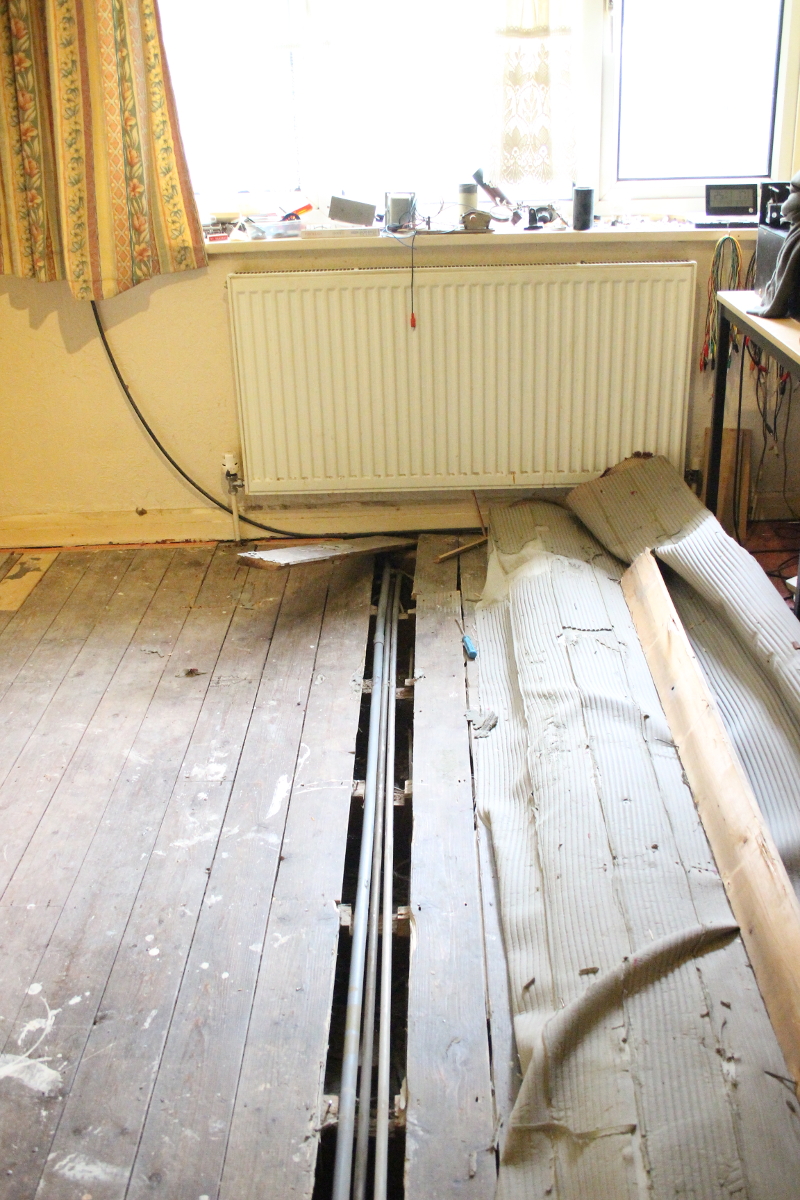 The suspect pipe is the one on the left – it’s 22mm diameter grey plastic, and is definitely not 90 years old. It’s the overflow from the cold water tank. Of course, it only comes into action if the ball-cock which limits the level in the tank goes wrong. I know it works, because the ball-cock did jam about 10 years ago, but the water spilling out into the garden rased the alarm. A new ball-cock was fitted and has been OK since, until now, when it unexpectedly jammed, as inspection revealed on Monday evening. So why did the water come into the kitchen instead of going out into the garden? 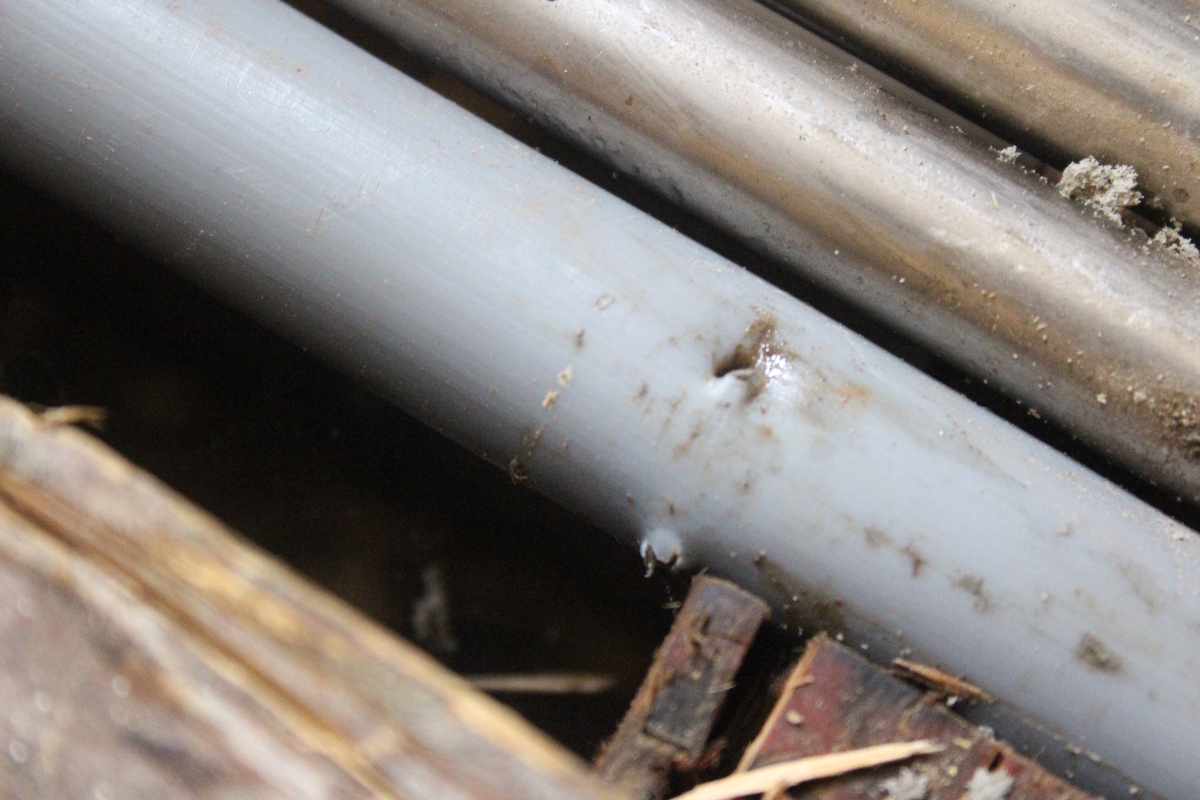 Aha! These two holes explain the water coming through the kitchen ceiling. But it’s hard to explain how they occurred; they’re clear of the cut-out in the joist, so people shouldn’t have been hammering nails at that point? Obviously a replacement section of tube was required. A 2-metre length of 22mm white ‘barrier’ pipe cost around £6, and a compression coupler about £4. There actually was a grey plastic coupler on this stretch of pipe, but we decided to get another in case the new pipe was any different. This was a Good Idea, because the new pipe was a whisker bigger & wouldn’t fit into the old coupler! There then arose a small but annoying problem. The coronavirus lockdown meant that Screwfix were operating a ‘click & collect’ policy, so you needed to order & pay on-line & quote a receipt number that was texted to your mobile phone. But I had dismantled my PC, Modem, Monitor, Keyboard, Mouse &c. Blast it! I had to cobble it back together on & around a chair on the landing to make the order.

Jumping ahead, above is the finished joint.The grey tube was very slightly less than 22mm, so wrapped a turn of gaffer tape round it, then tightened the union. The explanation of why the water did not run out through into the garden emerged when I pulled in the old grey pipe from the wall. The hole in the wall had not been big enough, so the 22mm pipe, I suggest, was hammered through the constricted hole. This resulted in the pipe assuming a horizontal & elliptical cross-section in the wall, though the end which came out appeared round. It must have recovered from the deformation, but I always wondered how it came to have a jagged end, and only stuck out of the wall for about an inch, when clearly 4 or 5 inches would be more plauisble. But worse, over the years – certainly in the last 10 years – it had cracked, in the thickness of the wall; and damp and lashing rain had washed around bits of sand, brick-dust, cement, mortar, whatever, which had seeped into the tube and completely blocked it. Hence the water was forced out of the two holes in the pipe, & started to fill the space between the joists, eventually coming through into the kitchen. (I’ve looked for the scrap pipe, but can’t find it at the moment; if I do, I’ll photograph it & add the image here.) 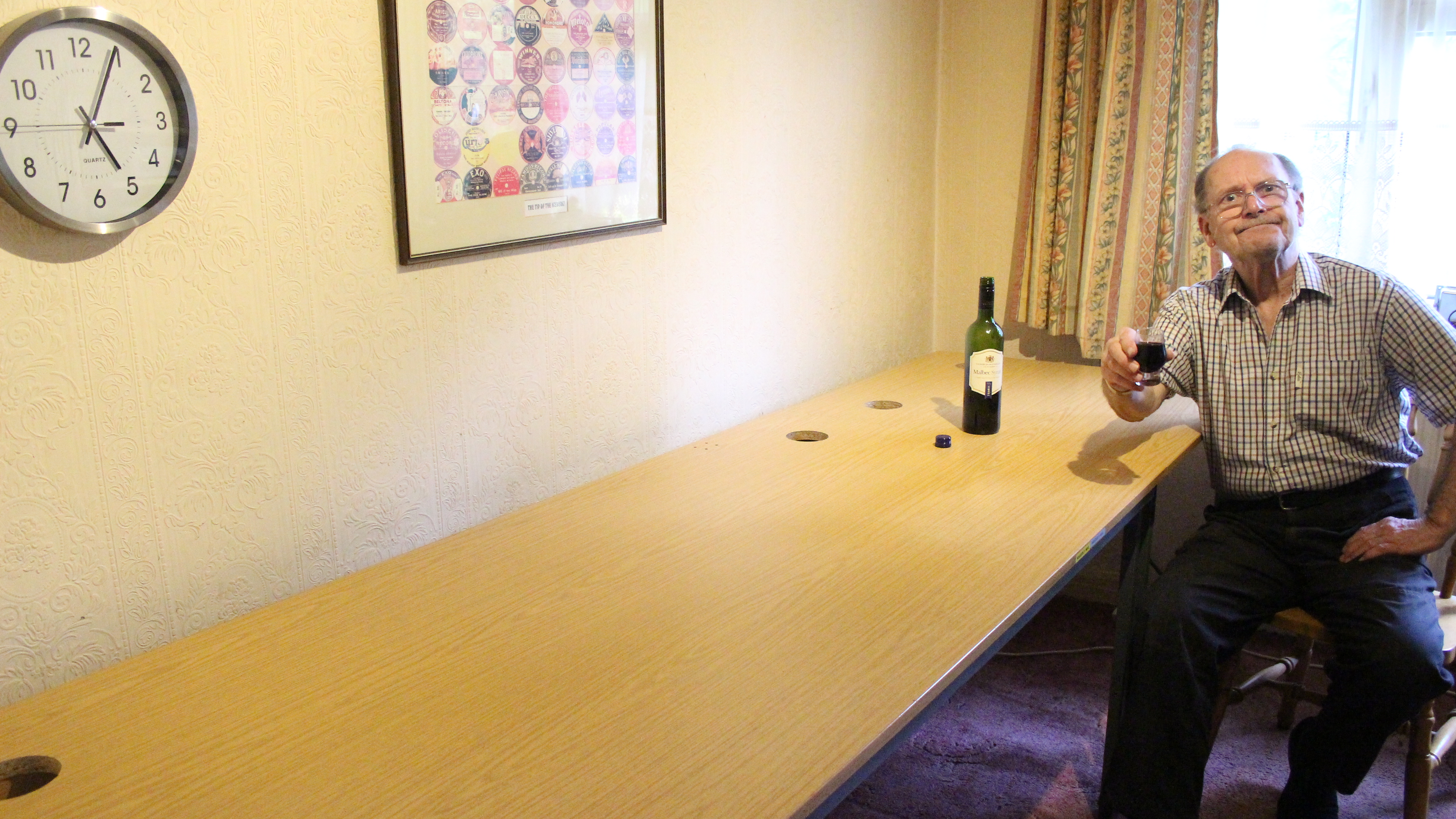 And here we are, proverbially ‘tired, happy and Defiant’, celebrating with a small glass of red – nothing to excess of course! There is one last piece of Forensic evidence, found while looking for the deformed pipe. Behold: 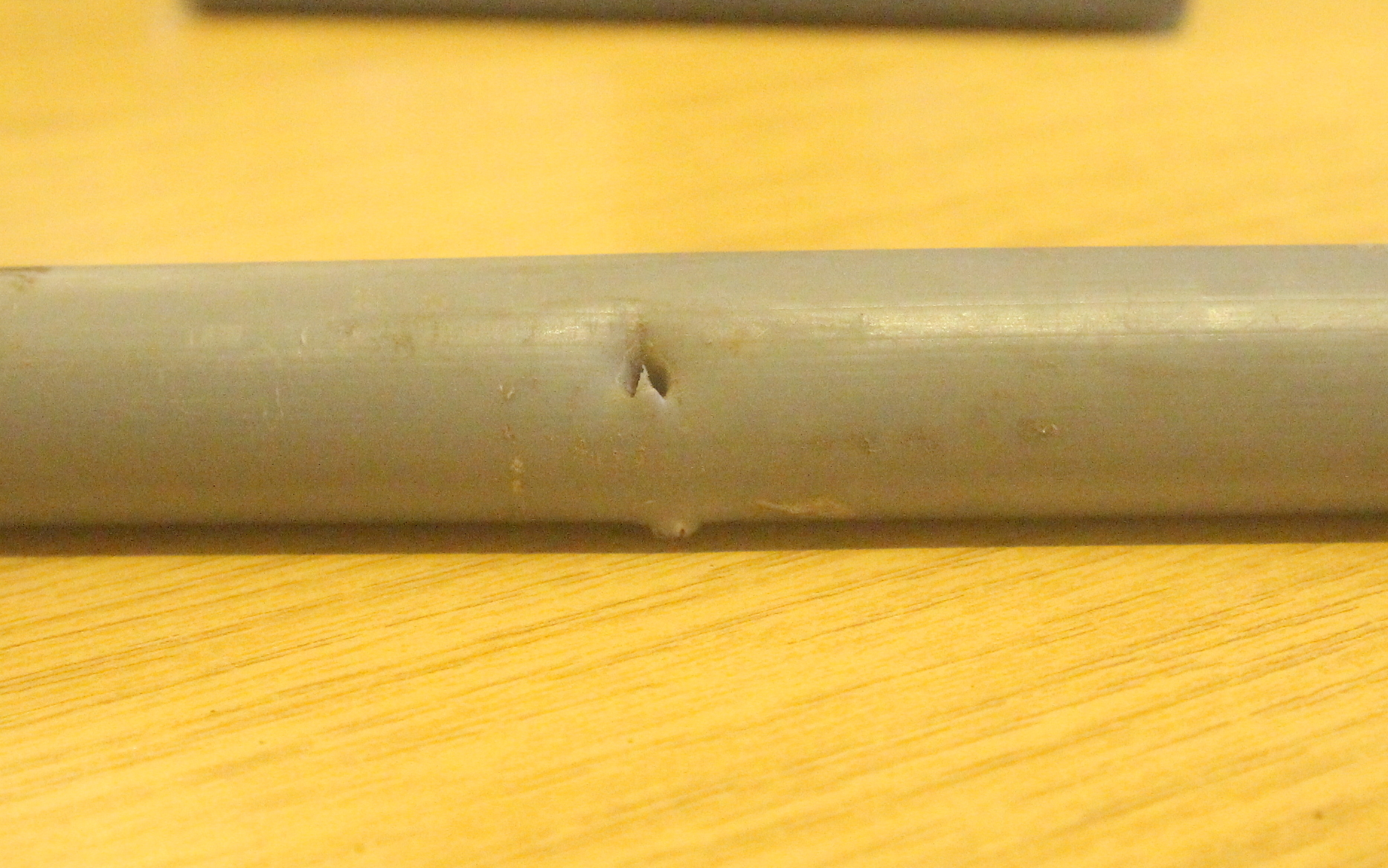 Because of watching Morse & things like that, this is manifestly an ‘entry wound’… 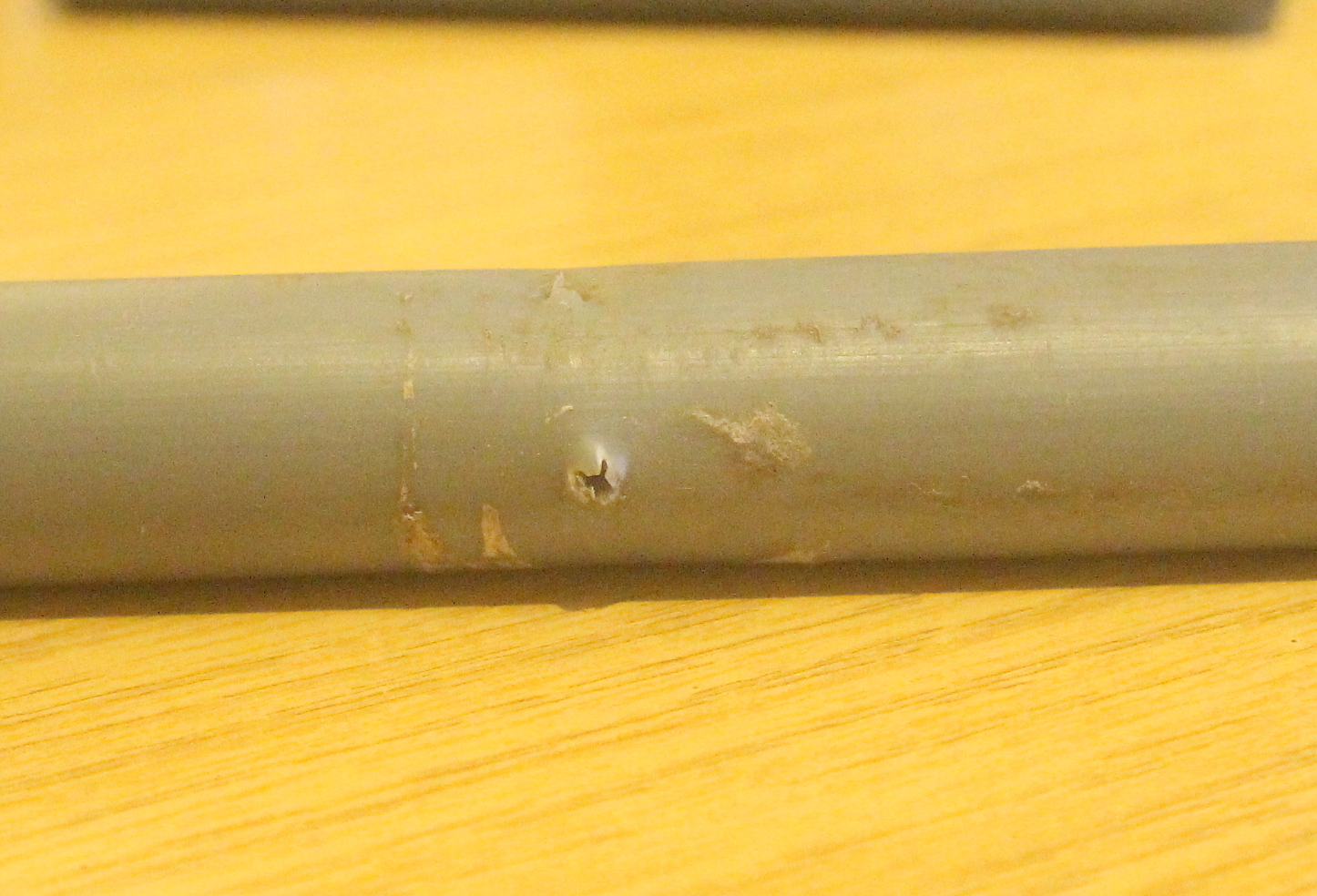 …while equally obviously, of course *, the above is an ‘exit wound’. 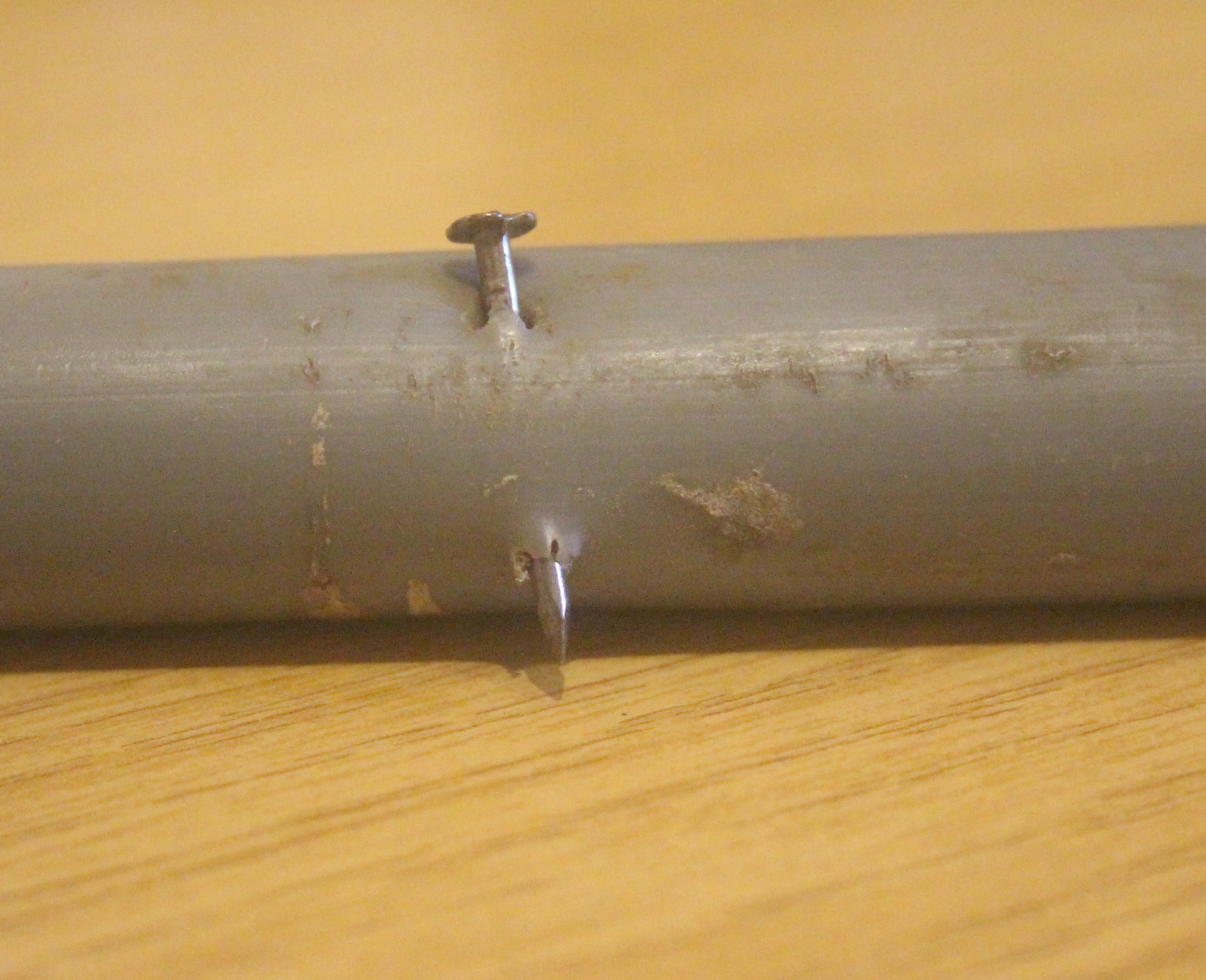 From the angle, we can even deduce where the murderer was standing when he pulled the trigger. 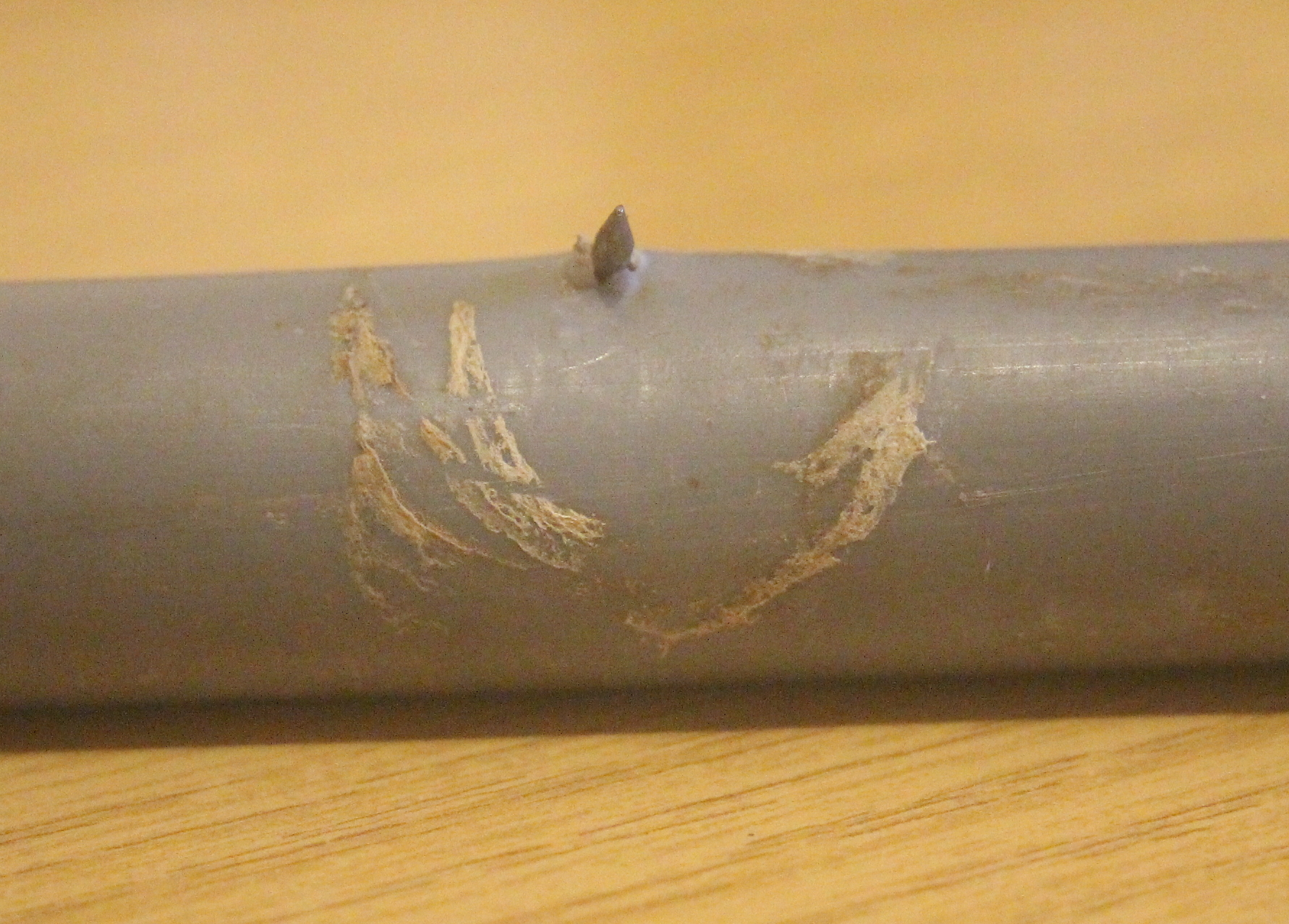 If we rotate the pipe, we observe curving lines of some substance; most likely embrittled adhesive. Clearly, the murderer, stricken with remorse, pulled out the nail, then applied a flexible patch of some waterproof material – either self-adhesive, or perhaps it was stuck down with Bostik or something similar. Since the pipe was rather unlikely to have any water flowing in it, it didn’t seem to matter much at the time. But at some point, the patch must have fallen off. Whether this was in relatively remote antiquity can’t readily be established; 10 years ago, when the overflow was activated, some water might have come through the holes. But not enough to seep through the kitchen ceiling. Indeed, the patch might still be lying there between the joists.

But if you reckon I’m going to dismantle everything again & take up the carpet & the floorboards just to look for it; my friend – you’ve got another think coming! 8^)

* When I was at school, æons ago, we had a Geography master who made very frequent use of the words ‘obviously’, and ‘equally’, and of the phrase ‘of course’. The most common couplet of them was ‘equally obviously’. He would be drawing a sketch map on the blackboard, in which there was a river, and he would say something like: “The river has to flow to the south-west, round this range of hills, but then, obviously, it will resume its orginal southerly direction. Equally obviously, all rivers and streams in this area flow in this same general direction towards the coast. But of course, waterways to the north of the watershed may take different paths. And equally, of course, nothing can flow to the east, due to the mountain range there….”

All this was fine, and his explanations were very clear. But once in a while, the very scarce “equally obviously, of course..” would occur, and produce a curious frisson of delight among us. Not sure why; but there would be an undercurrent of… slightly inane approval from the pupils in the class. Of course, the master (sorry, I can’t remember his name) knew full well what he was doing, and deliberately rationed the valuable triplet. Equally, I’m sure there was a twinkle in his eye when he said it. But, obviously, we were all listening, attentively – so we did actually learn quite a lot of Geography. Even I got GCE O Level Geography, so equally obviously of course, I was very grateful to him.