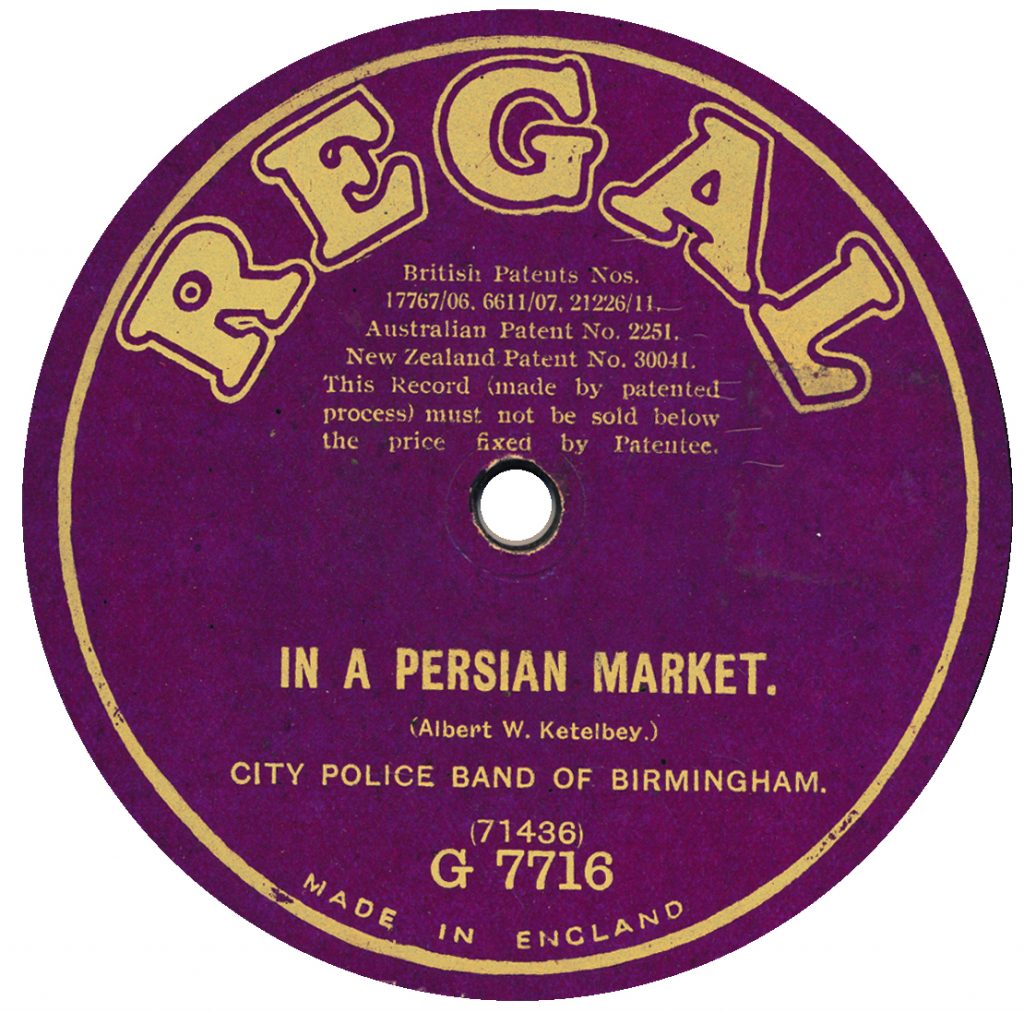 At the time of these recordings, Thomas Appleby Matthews was a very busy musician. Born in Tamworth, he had recently been appointed Conductor of the newly founded City of Birmingham Orchestra. He had also been Assistant Organist of St. Philip’s Cathedral in Birmingham from 1907 to 1914, and had worked with the composer Rutland Boughton, who taught from 1905-1911 at Birmingham and Midland Institute of Music – forerunner of the Birmingham Conservatoire. For example, he had conducted performances of Boughton’s music dramas ‘The Immortal Hour’ and ‘Bethlehem’.

Soon after his appointment to the CBO, Matthews had given a partial performance of Holst’s ‘Planets Suite’ with the CBO – Mars, Venus, Mercury, Saturn and Jupiter. Holst and Matthews had been student contemporaries at one time.

Matthews had been active in the Midlands music scene since at least 1903. He acted as conductor and choirmaster for local Oratorio and Operatic Societies, such as the well-known and still very active Studley Operatic Society. He had also been the conductor of the City of Birmingham Police Band since around 1907. This was a substantial brass and woodwind ensemble of around 60 players. The City of Birmingham Orchestra (founded, incidentally, by Neville Chamberlain with support from Granville Bantock) was at first somewhat inter-related with the Police Band; the first rehearsals of the CBO took place at Steelhouse Lane Police Station. Also, it was not unknown for members of the Police Band to play in the City of Birmingham Orchestra. This doubling up presumably depended on what resources were required for a CBO concert. Indeed, Holst’s ‘Planets Suite’ calls for a rather large orchestra, and it is by no means unlikely that the regular personnel of the CBO (if such there was in those early days) might have been augmented by members of the Police Band for that, and other performances?

In early October 1921, the Police Band (more probably a relatively small part of it) under Matthews travelled to London, to make recordings for the Regal concern. Regal was a subsidiary of the Columbia Graphophone Company; the 10″ (25cm) Regal records were of equal quality in all respects to the Columbia, but were sold at that time for 2/6d (12.5p), as opposed to the 3/6d (17.5p) asked for the ordinary Columbia series. (Columbia discs by ‘Celebrity Artistes’ cost more; those by soprano Lillian Nordica were a whopping 12/6d (62.5p) apiece.)

But to return to the point in hand. You may now hear all six of the issued sides for yourself! At first, we only had four of them, but are grateful to our friend Mike Thomas, who lent us his copy of the missing two on Regal G-7715.

As you see from the table, seven master numbers appear. It is not known what 71434 was, for it was never issued. Of course, there might have been more sides still, below 71430 and above 71436. That’s one of the tantalising things about looking into early discs – often we cannot really be sure about what was, or was not, recorded!

If you’re unused to listening to sound recordings made nearly a century ago, it can be difficult at first. They were recorded without microphones or amplifiers; the sound itself went down a conical horn and made a thin glass disc vibrate. These vibrations – the sound – operated a delicate lever with a point on the end which engraved a groove in a rotating wax disc. That’s all it was. No wonder it sounds a bit thin & hissy. But believe me, you soon get used to it; and what a thrill it would be, say, if you knew your great grandfather was in the Police band at the time…

Reference to Birmingham newspapers will give accounts of the Police Band concerts, which were usually concerts in parks, fêtes and public or civic events. Melodic tunes, military marches, selections from popular operas and novelty items were the staple of all such bands, as the above selections show. ‘Tiger’s Tail March’ has a delightful ragtime flavour. ‘Mummy Hobble’ is a fox-trot, a dance which had been popular since 1914, and its curious title is not really odd when you bear in mind that in 1921, Tut-ankh-Amun’s tomb had recently been discovered. Hence there was a sort of craze for all things Egyptian. The appearance of Albert Ketelbey’s ‘In a Persian Market’ is no surprise in view of its popularity, no less the fact that he was a ‘local boy’, born in Lozells in 1875.

The ‘City Police March’ is very likely an original composition for the band. It would be great to find out who ‘H. Henson’ was. A member of the band, perhaps?

By the way, if you like delving into the lighter music of a century ago in original recordings, there is a nearby page with several 1922 recordings of similar material by the Brighton Regent Orchestra – they played in the brand new De Luxe Regent cinema.