Of diatoms, and other pond things…

Pond Life needs its own tab, because there are both plants & animals living in – with any luck – a balanced & sustainable environment. We have intermittently dabbled with collecting & examining water samples from ponds, canals & rivers over the past few years, since we got our battered old stereo microscope. The slide holder has BOT. DEPT. U.C. LON. stamped on it, and if this is the original stage,  it must have performed sterling work in the Botany Department of University College, London for at least 25 years before coming into my possession.

But the problem was, making photos. of the stuff we found. We have a reasonable DSLR camera, and a friend supplied an adaptor that would fit it into one eyepiece. But the results were always rather unpredictable and always suffered from flare. So recently we thought ‘what the heck’ and bought, from Brunel Microcopes, their budget digital camera ‘Eyecam Plus’. Brunel is a very long established, famous & serious company, and we are absolutely delighted with the results so far. The ToupView software that came with the scope is amazing – we’re still just scratching the surface of it. But it’s great to see, for example, a diatom which looks unusually long, and simply draw a line alongside it, & find that it is 345.56 microns long. (Sorry, I’m too old to change to micrometres.)  8^)

So: what about some images? 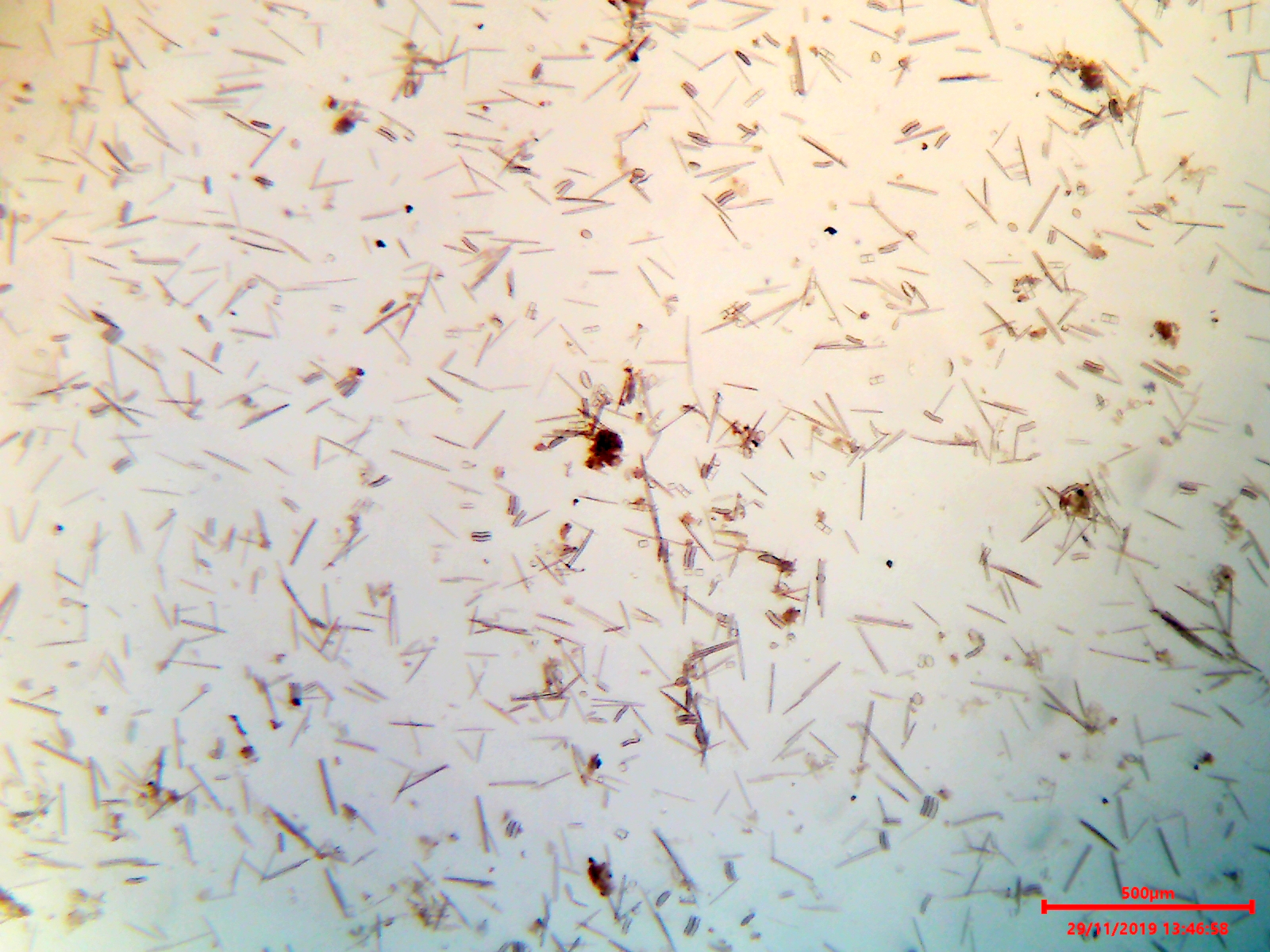 The first is a good example of ‘Beginner’s Luck’. in 2011, we took a couple of leaves from a plant growing in small stream which ran into the River Trent at Branston. YouTube videos showed us how to remove the organic matter of the leaves & the chlorophyll from the diatoms by soaking them in bleach, washing, centrifuging &c. The tube was then agitated, and a drop or two of water with diatom frustules in suspension were placed on a slide. This was very gently heated until the water had evaporated. One drop of mountant was then applied, a cover slip placed over the it, and more heat applied. This boiled off the solvents, and the cover slip gradually settled down over the diatoms. Bubbles of solvent vapour continued to migrate to the edge of the cover slip and escape. But all being well, no bubbles were left under the slip at the end of the process, and the diatoms were better visible because of the high refractive index of the mountant. Care should be taken to avoid excessive heat in the process, because the mountant may become discoloured. Many of my other early attempts did so! But you can see above, literally hundreds of diatoms. 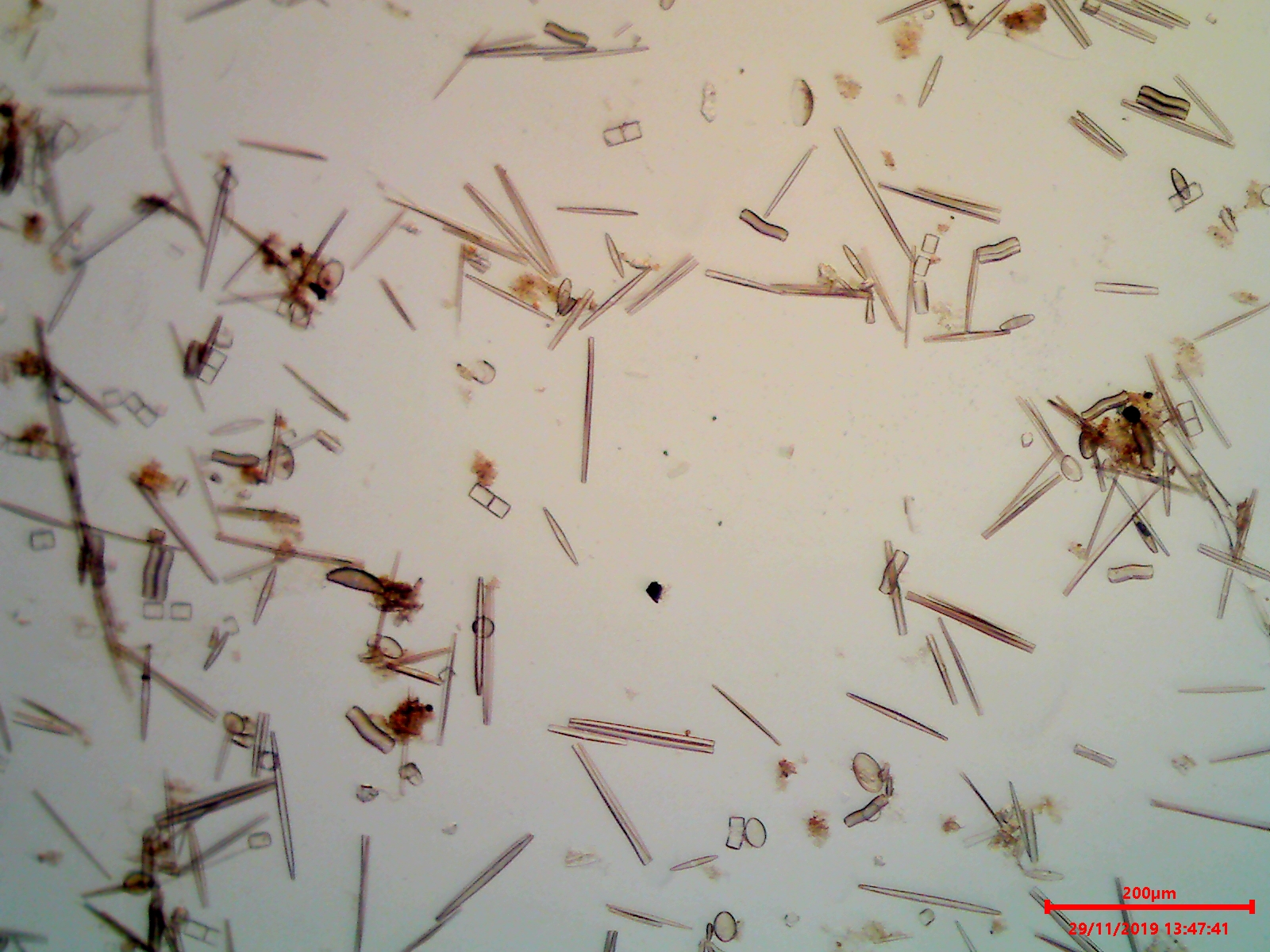 ‘This is easy!’ we thought; but have never had anywhere near the same density in any other sample we have taken. One thing seems certain: the water in that stream must have been quite free from pollution, because diatom sampling is widely used to make a simple & quick estimate of pollution levels. Few diatoms of few species indicates heavy pollution. Many diatoms of many species indicates little pollution. Of course, you need a carefully standardised procedure for this. I have just been interested in general impressions. 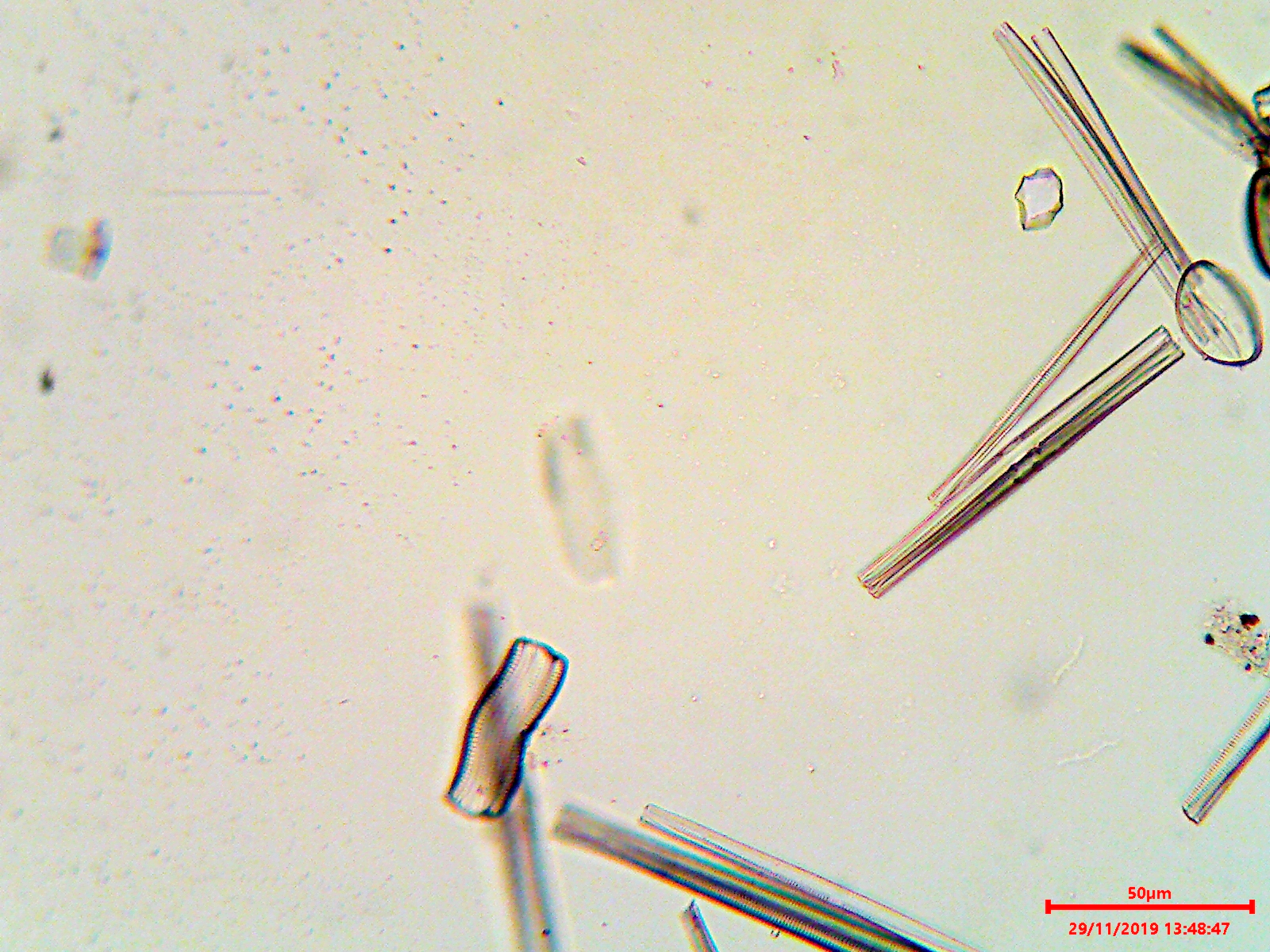 By way of contrast, below is a movie (400x) of a clump of brown filamentous algae taken from the little River Alne, near Henley in Arden. The living, movng diatoms are green because of their chlorophyll – diatoms are plants, of course – and has very slender tips. AFAIR, I have not seen one exactly like this before. (There are around 2,000 species of fresh-water diatoms in the British Isles, and far more marine species. But identifying them is not a job for the faint-hearted, like me!)

The mobile species of diatom move by the ‘raphe system’. I’ve looked it up, but sorry, don’t understand how it works! There are many other diatoms, but they are out of focus, because at x 400, the depth of field is extremely small.

I suppose the classic thing we hope to find in a pond, is the amoeba. You know, the blob-like thing that pushes out pseudopods, then draws itself into them, in order to move? I had not seen one until this afternoon. We used the time-lapse function in ToupView to take one image every two seconds – about 300 in all. Then, we dumped all those into the video editor (Filmora) and ran them at about 7 frames per second, producing a primitive video showing an amoeba (I’m pretty sure it is one – but I often get things wrong) moving quite quickly. The other denizens of the water droplet, needless to say, shoot around like jet planes.

Where did we find the amoeba? Well, it turned up in an expendable plastic container, in which we attempted to start our own indoor pond. This was done by bringing water from a nearby park pond in a 5 litre bottle, plus some algae scrapings which contained many diatoms & other things, plus at least a couple of hundred daphnia from the hundreds of thousands who happened to be disporting themselves in the pond. That water was poured into the plastic box, which was placed on a window-sill which gets some direct sun in the afternoon. An aerator was provided. However, we also discovered ‘pond life’ in our own back garden: odd abandoned plant saucers lying around were found to contain green algae in rainwater, which must have arrived by wind-borne spores. Additionally, large numbers of Bell Animalculae and rotifers were present on this garden algae. How they arrived, I have no idea; they must have some quiescent form than can be blown around by the wind. These cultures were added to the ‘pond’. It has now been up & running for about a month, and further algae has grown on the bottom of the container:

The colony of daphnia is languishing, I fear; but the other stuff seems to be flourishing for the time being. This morning we decided to take a small sample from this newly-grown algae. It had quite a lot of active creatures in it – one of which was the amoeba. So I can’t rightly tell you whether the amoeba came from the local park pond, or from my back garden. There is so much to learn!

We also have some Canadian pond weed, Elodea sp. This is present, in ever-increasing quantities, in a small aquarium nearby. We were looking at a leaf of this we had snipped off, to see whether diatoms &c., were beginning to colonise the plants, which were got from a pet store. There was no especial sign thus far, but we saw, to out surprise, green things migrating around inside the very large leaf cells. After googling this, it was found that Elodea is nearly always used to demonstrate the movement of chloroplasts inside a plant cell – because the cells are very big, and the phenomenon is so easily observable.

I never realised that all this stuff is going on, pell-mell, inside plant cells! Don’t ask me how the chloroplasts go round the cells – I don’t know, but read something about a kind of thread running around the internal periphery of the cell, and the chloroplasts move long it rather like beads on a string. In the video above, you can see two distinct layers – apparently these leaves only ever have two layers of cells – so some of them are moving in different directions, being in the other layer. 400x.

Truly, the workings of Dame Nature are marvellous indeed.