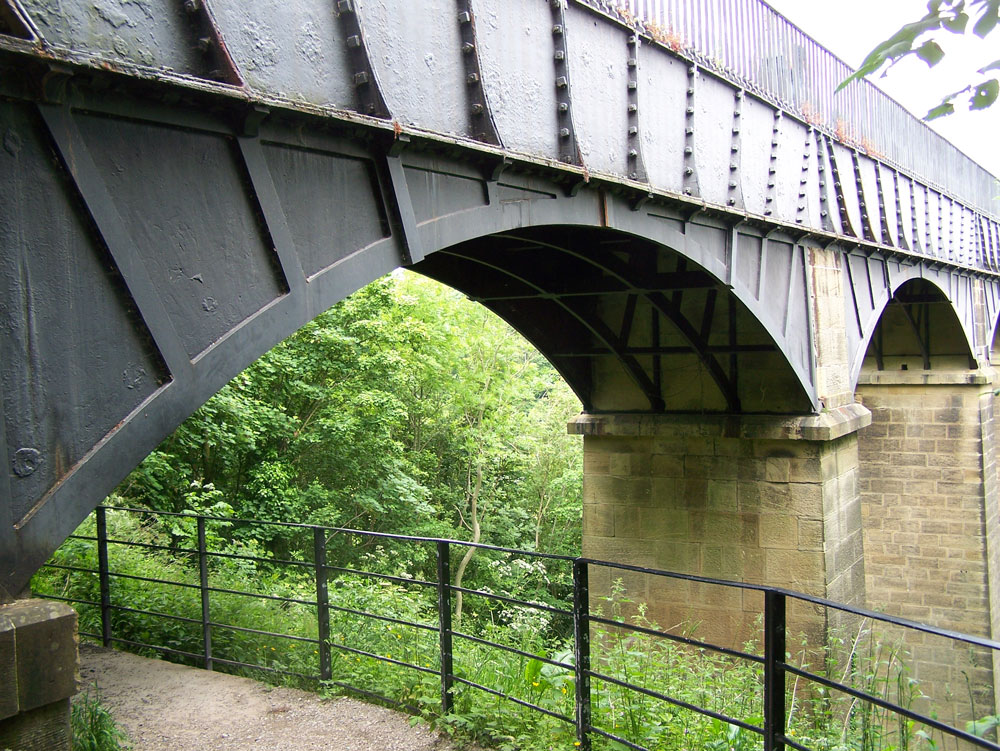 3rd June 2007. As you know, we are quite keen on canals. So when went to a Sunday lunch-time gig in Llangollen, we made a point of visiting the spectacular Pontcysyllte canal aqueduct. I think it was opened in 1805, and was part of a projected canal to link North Wales to the rapidly-increasing canal systems elsewhere. But the Llangollen canal had to cross the River Dee, and that was quite a tough proposition, as it was over 100 feet deep at the logical crossing point. You can of course read about this aqueduct elsewhere on the web, with accurate details, rather than my own meanderings. Actually, I think what happened was they built this aqueduct – a stunning piece of canal architecture – fairly early on the project, because crossing the River Dee was ‘The Big One’, without which the project wouldn’t work at all. So they spent lots of money on it, & got it built OK, as you can see. Unfortunately, having pulled off this great engineering feat, it gradually emerged that after all, there weren’t too many places the canal could go to on the north side of the Dee – at least without further very expensive building; and the whole thing sort of fizzled out. Also, probably they hadn’t got any money any more? I’d heard about this aqueduct before; and indeed had looked at many pictures of it on the ’net, so it was great to actually visit it. Well, when I say great, I do actually suffer slightly from vertigo; and I had been told by a friend who had crossed it in a narrow-boat that it was quite scary. So I decided just to look at it & photograph it certainly not walk across it. Yet when we got there, and after we had been amazingly impressed by its structure, we were surprised to see family groups walking across it, quite young kids perfectly unconcerned – the girls skipping & dancing across the narrow towpath, as they always do. So we clearly had to make an effort! By dint of holding on to the hand-rail at all times, and humming a tune of extreme unconcern, we got safely across. And back, of course. The shot above is looking north, and the other shot here shows the elegant arches below, again, from the south side. It also shows the stone piles on which the aqueduct is built, and more to the point, the actual structure of the water channel itself. As you can see, it is made from many sections of cast iron with large flanges, which are simply bolted together. I don’t know how many sections there are altogether, but there must be quite a lot! The two arches you see here have er… 22 or 23 castings on this side, and there are lots of arches – I’d guess 20 at least. So if there are say 11 vertical castings per arch – that’s 22 counting both sides -, and if we assume 20 arches, that’s 440 cast iron ‘modules’ (if I may use that modern term!) all bolted together. I don’t know how they made it waterproof to start with, but I did learn that if it ever has to be drained for repair, the joints dry out & it’s a pain in the neck to get it waterproof again. The Pontcysyllte Aqueduct is not only a tremendous monument to our canal builders, but today remains a valuable resource. No just because of tourism, but also because it is fully functional as part of the water system of that area – it conveys water, or at least equalises the water levels, between important reservoirs supplying a large surrounding area. There seems to be no doubt about it: 200 years ago, those people ‘built better than they knew’! 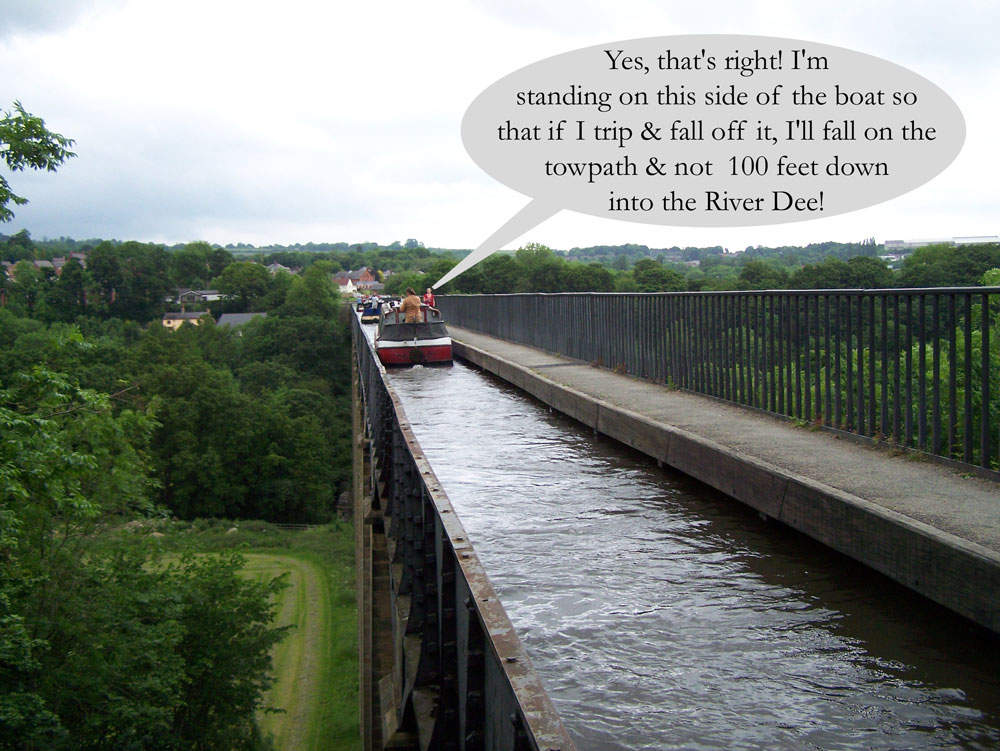 One minor point of note: you’ll see in this photo. that the towpath ‘sticks out’ from the side of the channel, over the water. This is to allow the water ‘to get past the boat’. The first such cast-iron aqueduct to be built – which was very much smaller of course – had no provision for this; it just had a minimal clearance around the boat. Accordingly, the horse used for towing the narrow-boat could hardly draw the boat forward against the pressure of the water, which was sort of ‘piling up’ against the front of the boat. This was duly noted and taken into account with subsequent aqueducts, such as Pontcysyllte.