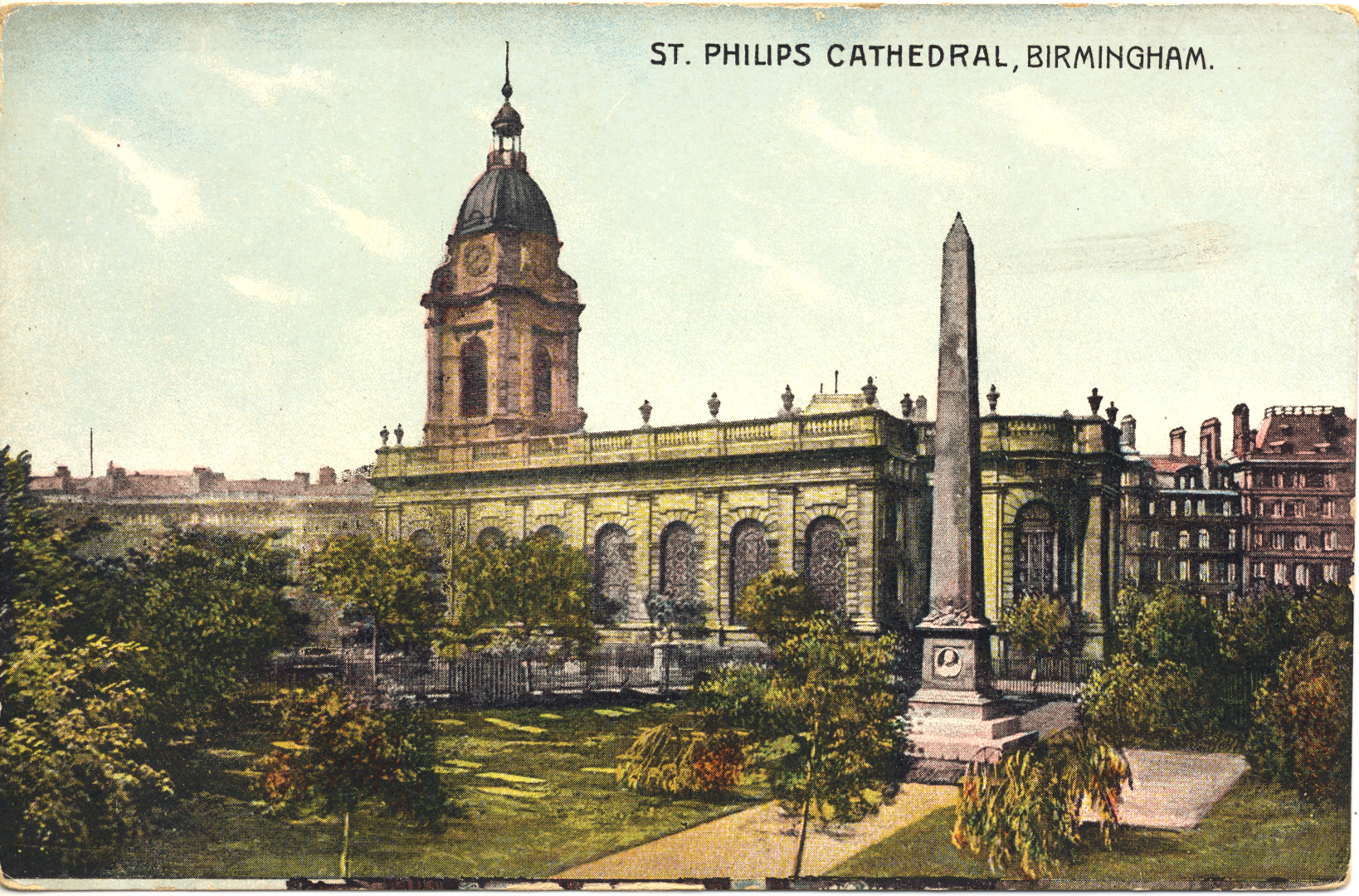 January 13th 2016. In very rough chronological order, here are a few – mostly common – postcards we picked up at the Postcard Fair at the National Motor Cycle Museum last autumn. We don’t collect postcards as such, in case the bug bites seriously; but one can’t help falling for a few, can one? 8^)   Here is St. Philips Cathedral. It was built as St Philips Church between 1711 and 1715. I believe the land was donated by a Philips or Phillips family, hence the choice of dedication; but I often get things wrong! When Birmingham gained City status in 1889, there were apparently plans to build a large new cathedral, but in the end St. Philips was elevated to that status. Unused, probably 1900s. 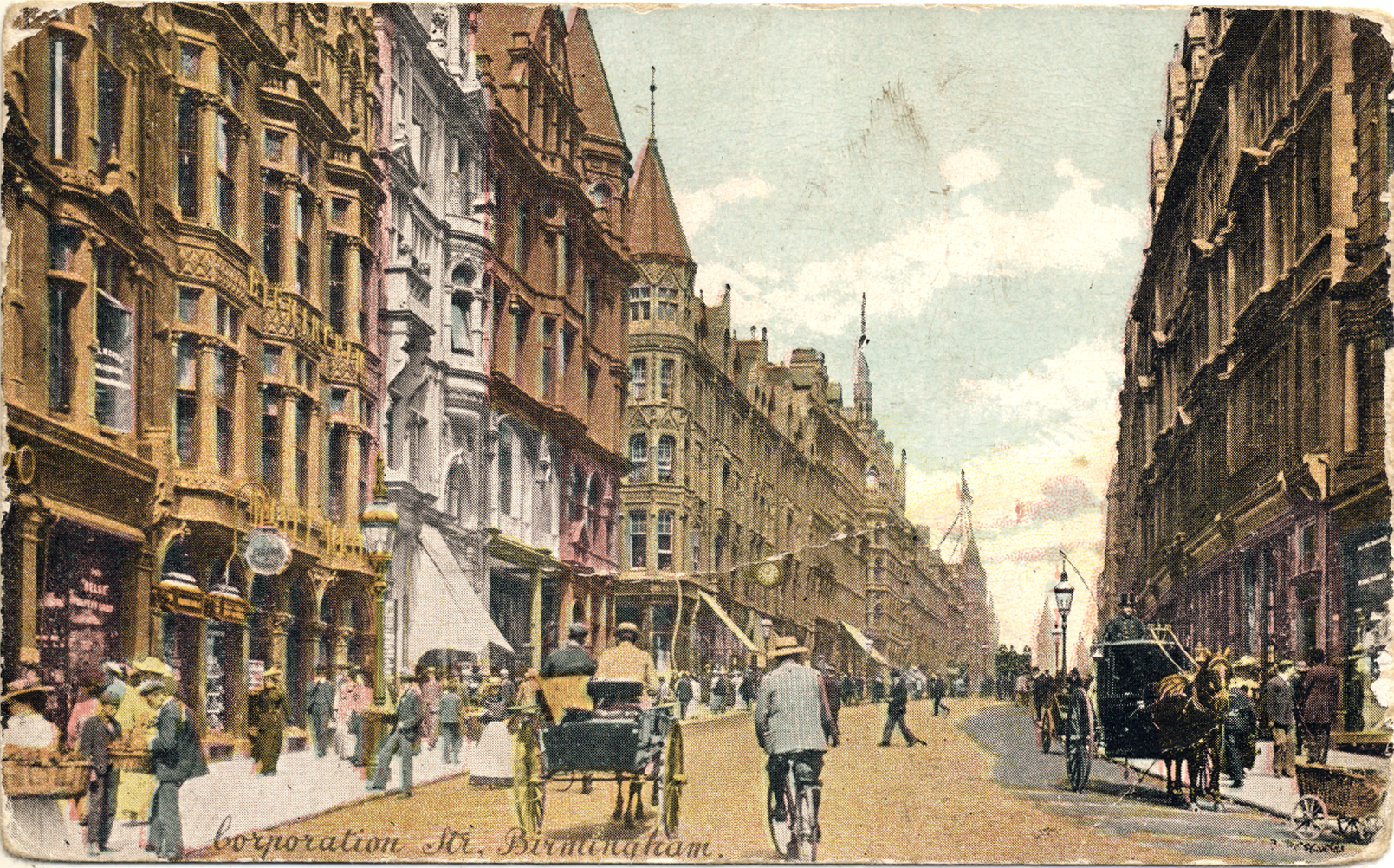 Corporation Street. Work began in the late 1870s on this new, prestigious thoroughfare. It eliminated a jumble of slums, though, commendably, these were thoroughly documented and well photographed before demolition. Unused, probably 1900s. 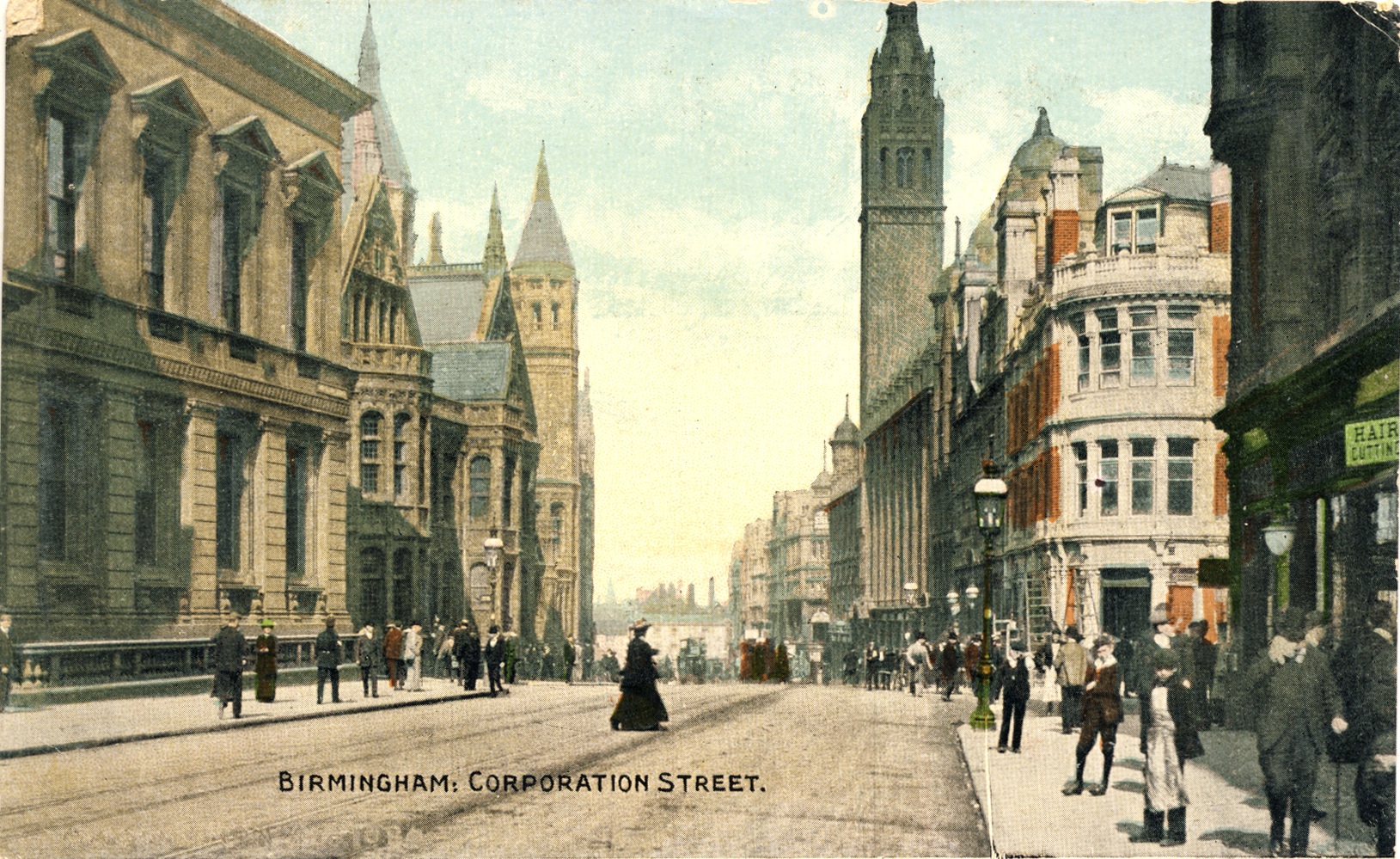 This is further down Corporation Street, towards Gosta Green. The Law Courts are on the left, and the great tower of the Methodist Central Hall on the right. Postmarked 1911. 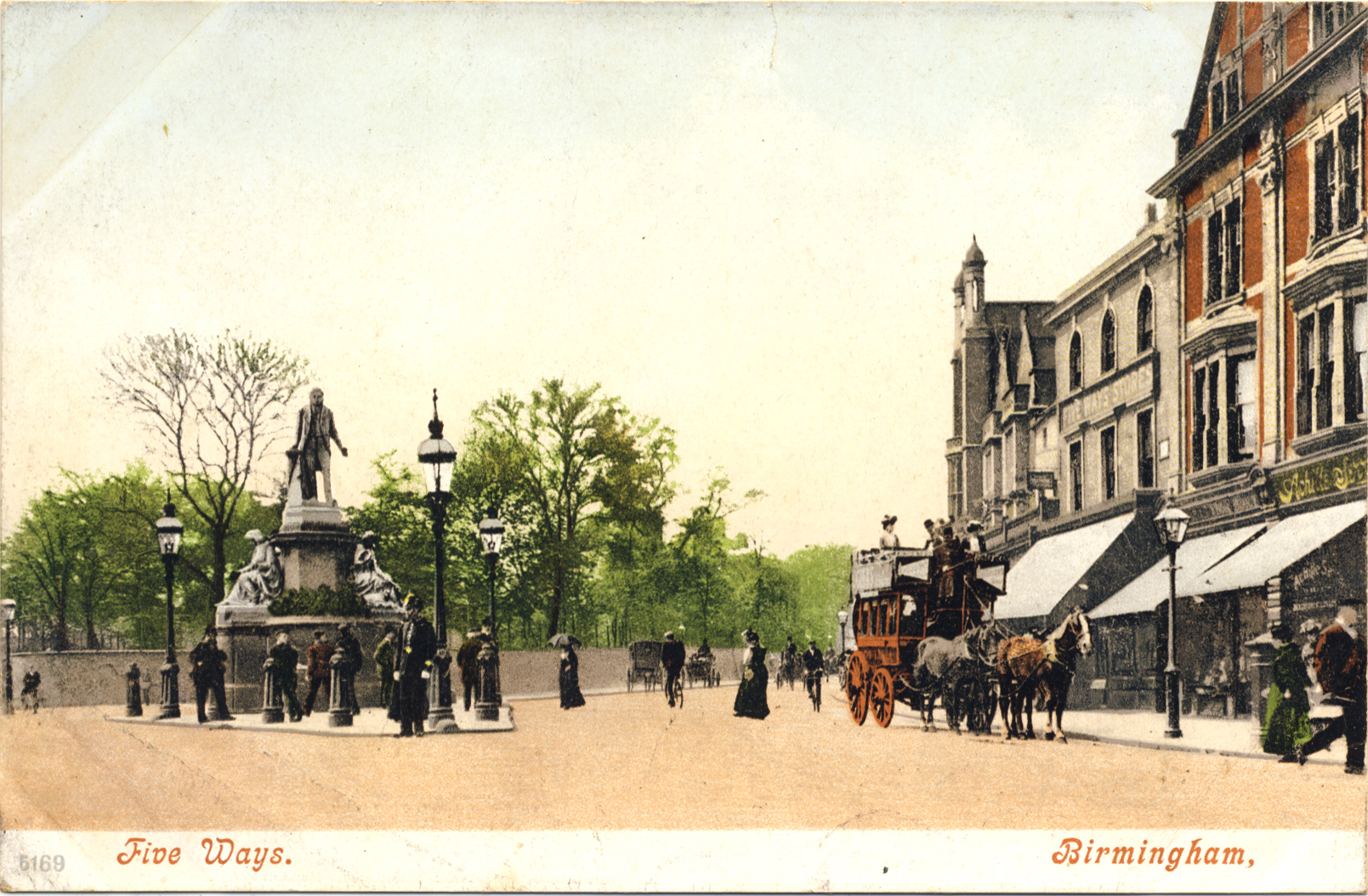 The far end of Broad Street, the Hagley Road bearing off to the right. The statue is of Joseph Sturge (1793-1859) https://en.wikipedia.org/wiki/Joseph_Sturge   It is still there, though almost certainly not in the same place. Unused, probably 1900s. 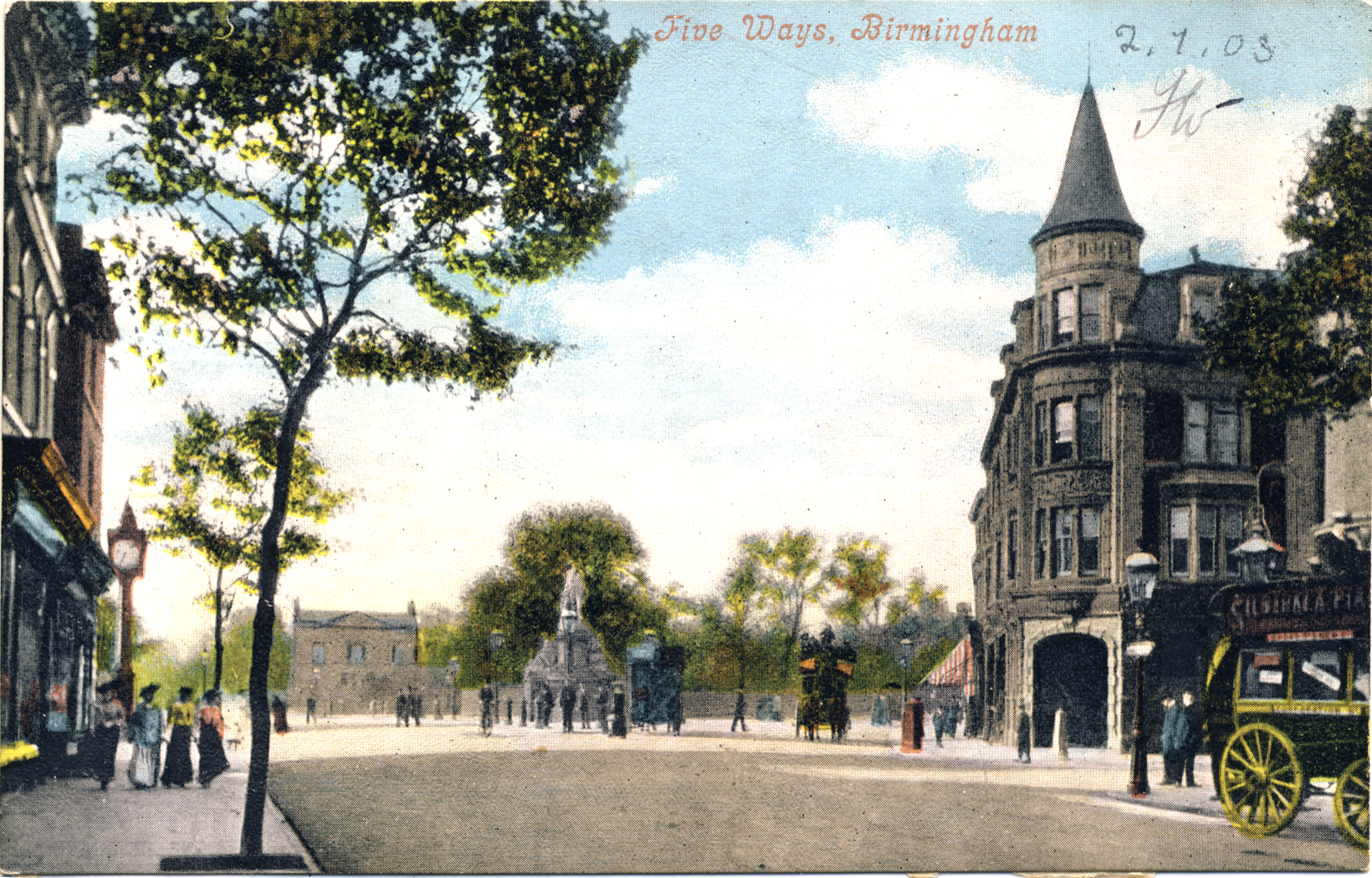 A slightly wider view, helpfully dated 2nd July 1903. The clock is still present though it is now to be found in front of the house between the near tree & the statue. The house looks late 18th century, but have not been able to find anything more about it as yet, apart from it being a listed building, and currently a Costa Coffee Drive Though. 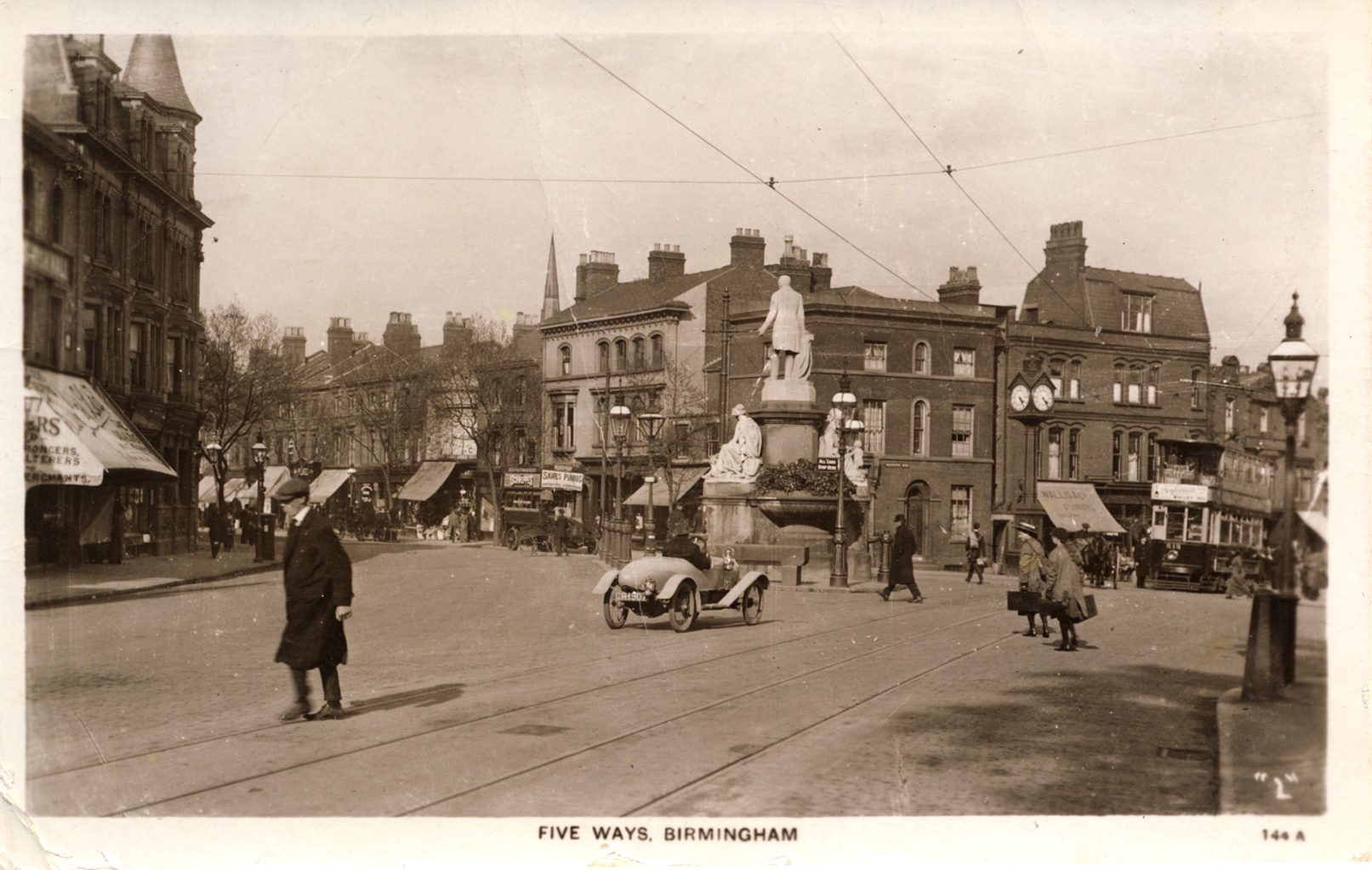 This is postmarked 1919. We’re also looking from behind the statue, so Broad Street goes off to the left, and the tram lines bear right down Islington Row. The light car’s registration number looks like CR 1907. CR was Southampton; I wonder how long it had taken him to get to Brum? 8^) 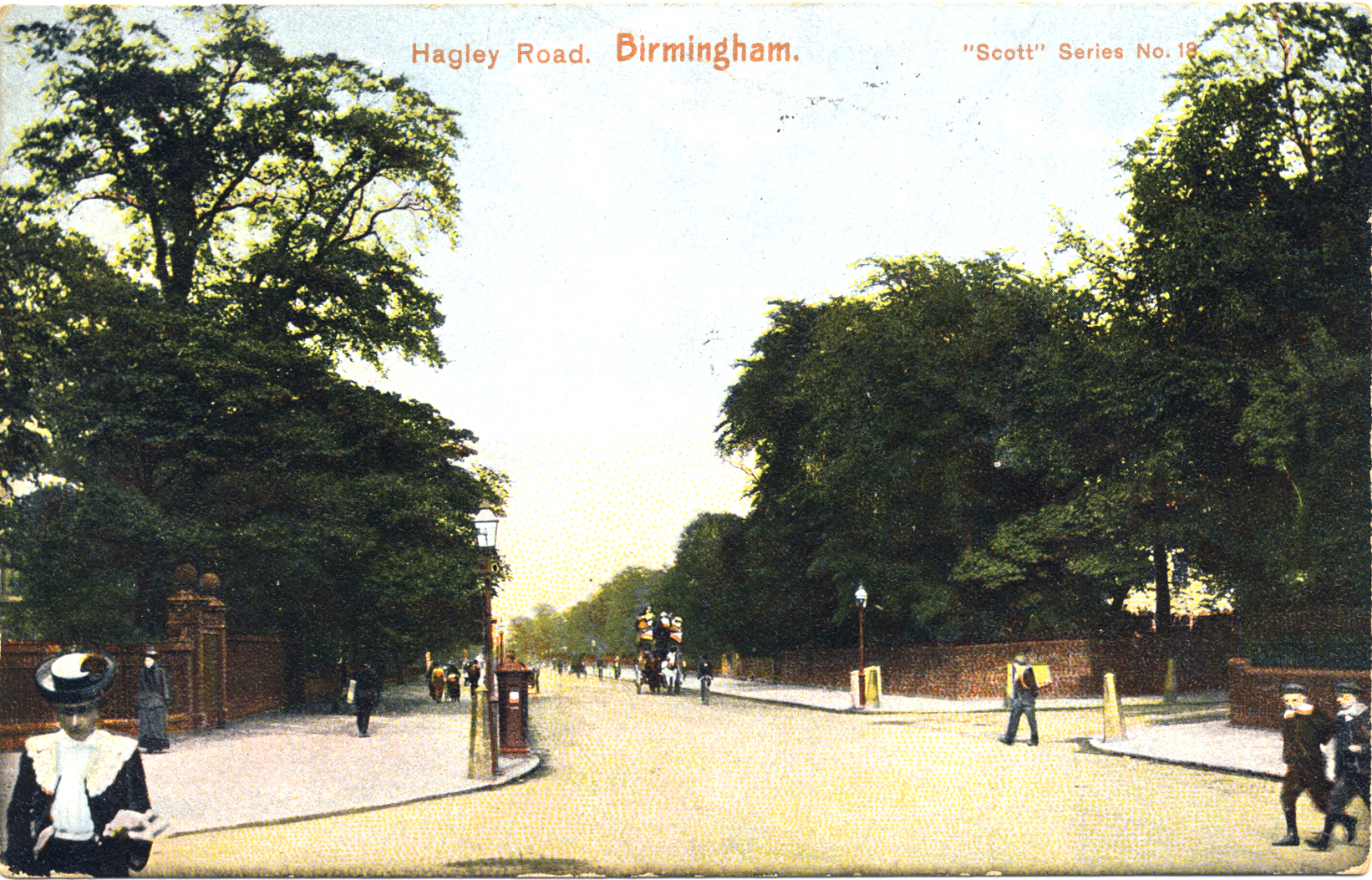 A well-populated Hagley Road, postmarked 1906. Well populated, that is, by people and not by traffic! Notice the ornate Victorian pillar box. There appear to be bollards on the corners of the roads at left and right. Perhaps these were to stop horse-drawn vehicles from cutting the corners, mounting the pavement & endangering pedestrians? When I was a kid, my grandfather (born 1882) always used to admonish me: ‘Keep out of the ’oss-road!’ 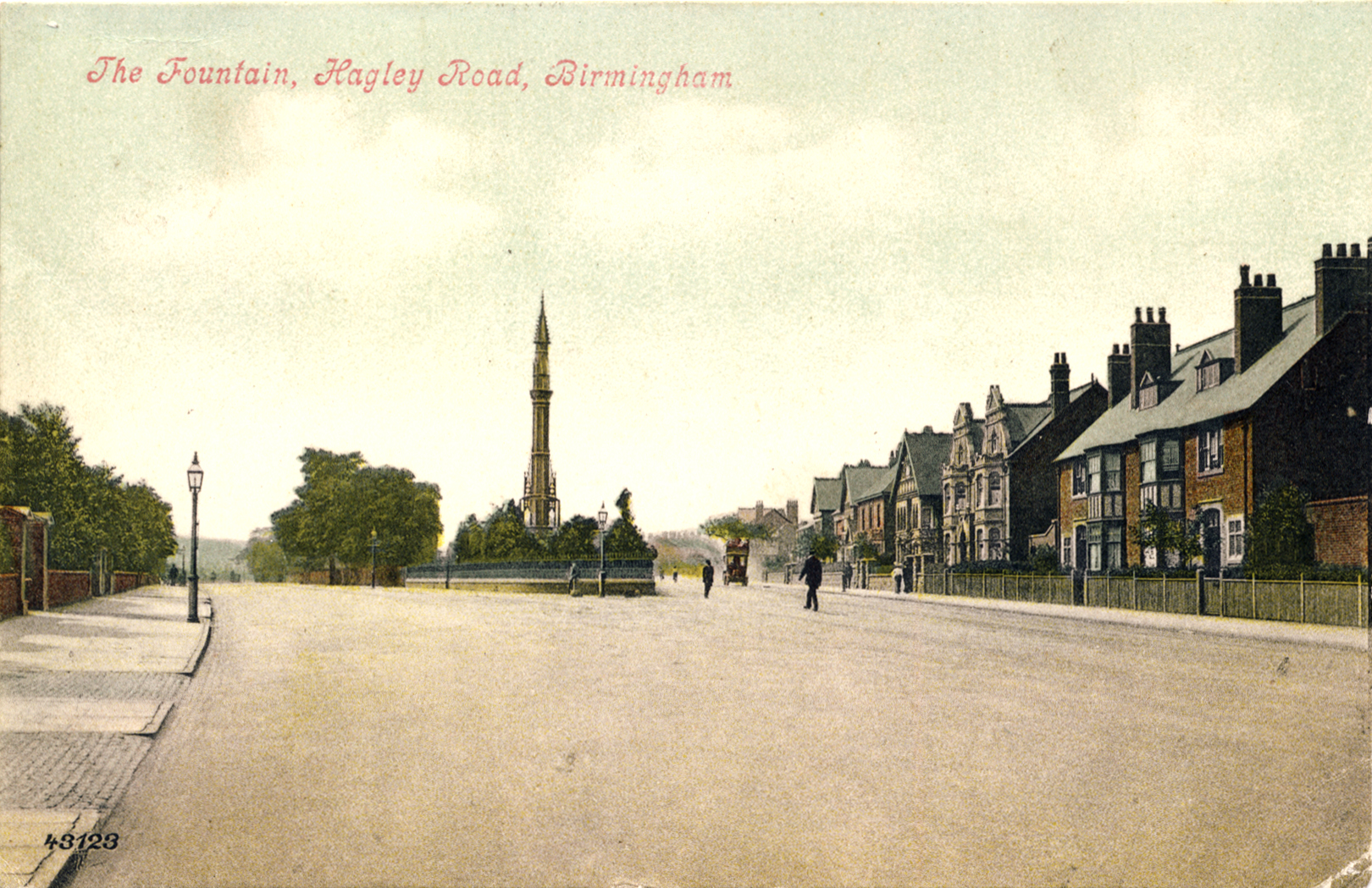 Such a vast expanse of empty Hagley Road is unthinkable today. Sandon Road branches off to the right. The photographer has undoubtedly set up his tripod actually on the road; were you to try that lark today, you wouldn’t last 15 seconds! But the fountain was connected with a covered reservoir of about 1860. The card was used, but the stamp had been lifted, so no postmark date. 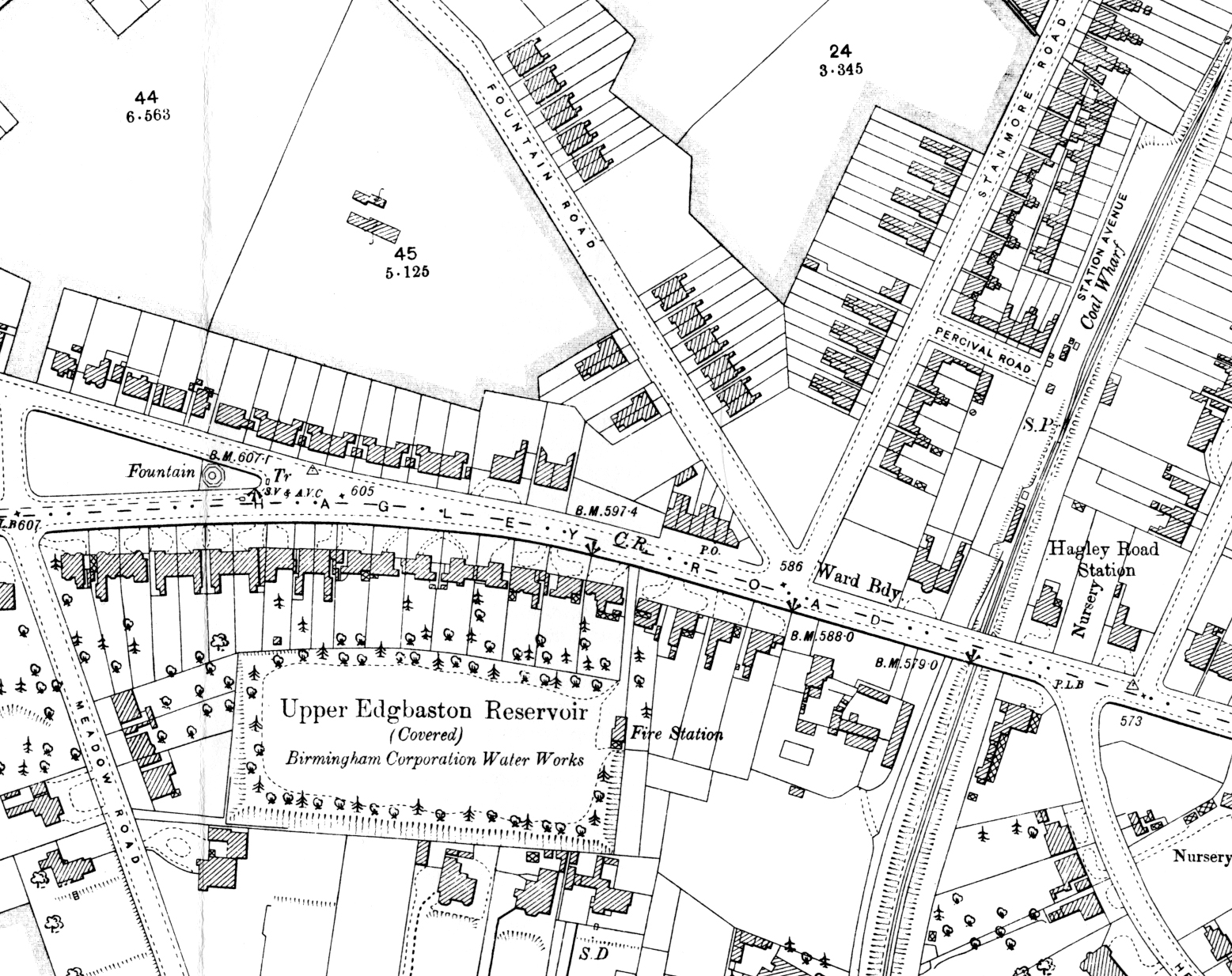 Here is a map of 1904 showing the position of the fountain and the reservoir. The latter is still in use. Fountain Road runs to the north-west. Another point of interest is the railway running north north east. It’s the Harborne Branch line, now in use as a walkway. I have walked and cycled it many times, and noticed that although you were not aware of any incline, you were slowly going up from Harborne. After you had gone north under the Hagley Road, you could freewheel a lot. From this, we infer that the Hagley Road is a ridgeway, and therefore very ancient. Hagley Road station was closed to passengers in November 1934 but used for coal and goods until the whole branch was closed in 1963. 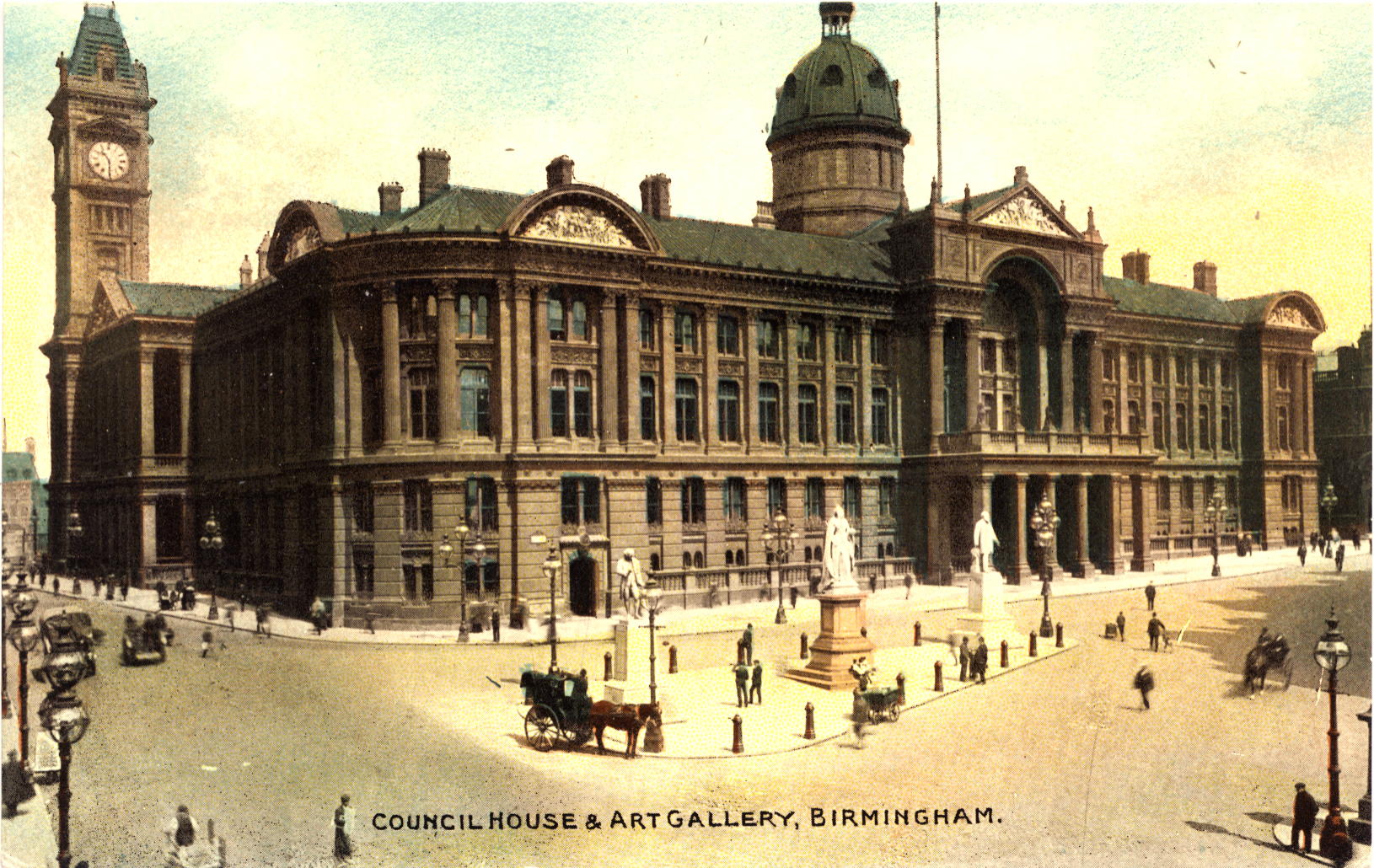 Back to the City Centre. The Council House and Art Gallery still look the same, but of course the whole area is now pedestrianised. No date for this unused card. 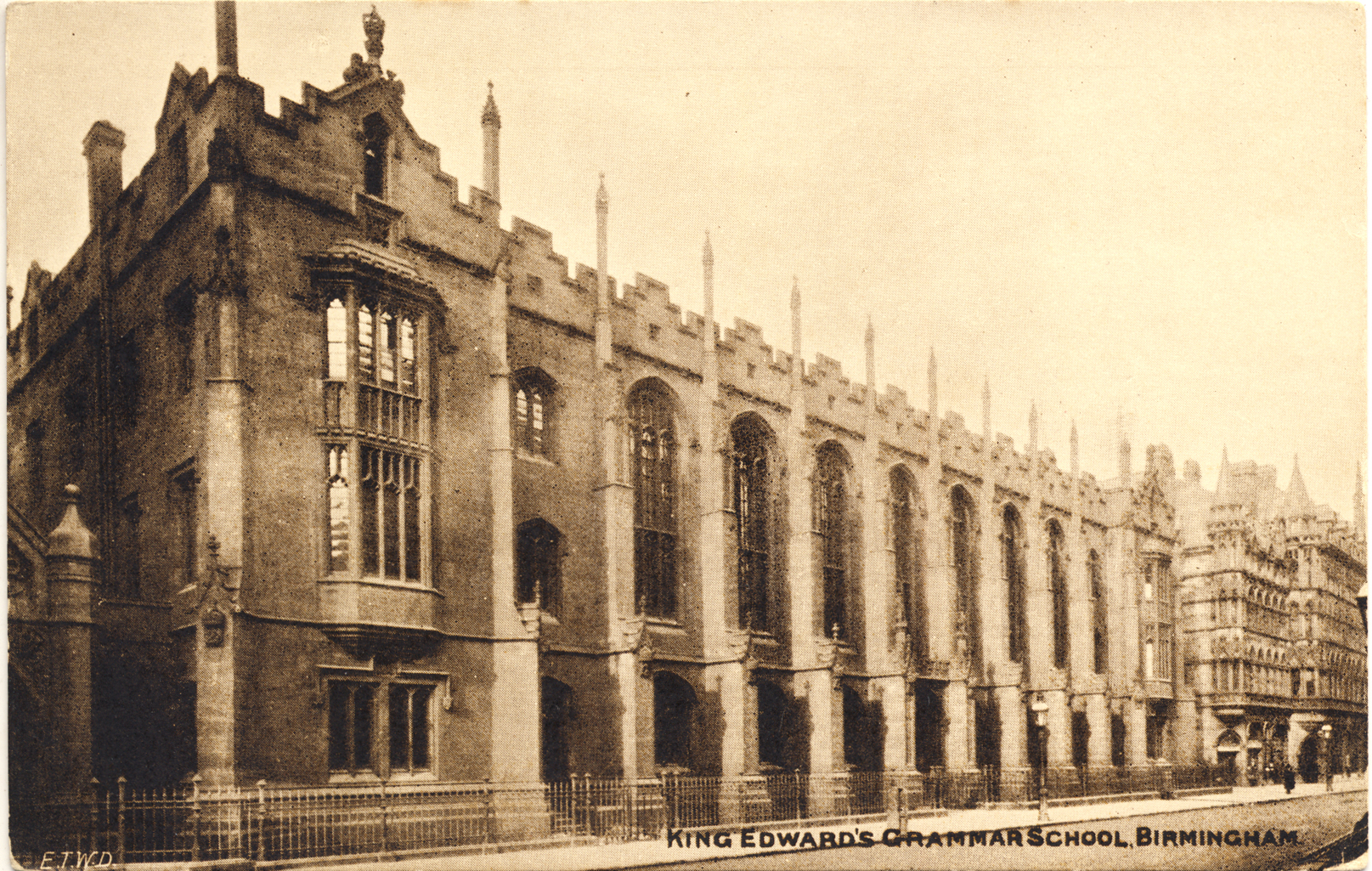 This building was in New Street and dates from the late 1830s, thought the school itself was founded in 1552 by King Edward VI. Naturally, the school still exists, located since the 1930s in Edgbaston, and ranked 7th in the national ‘league table’ of Secondary schools. 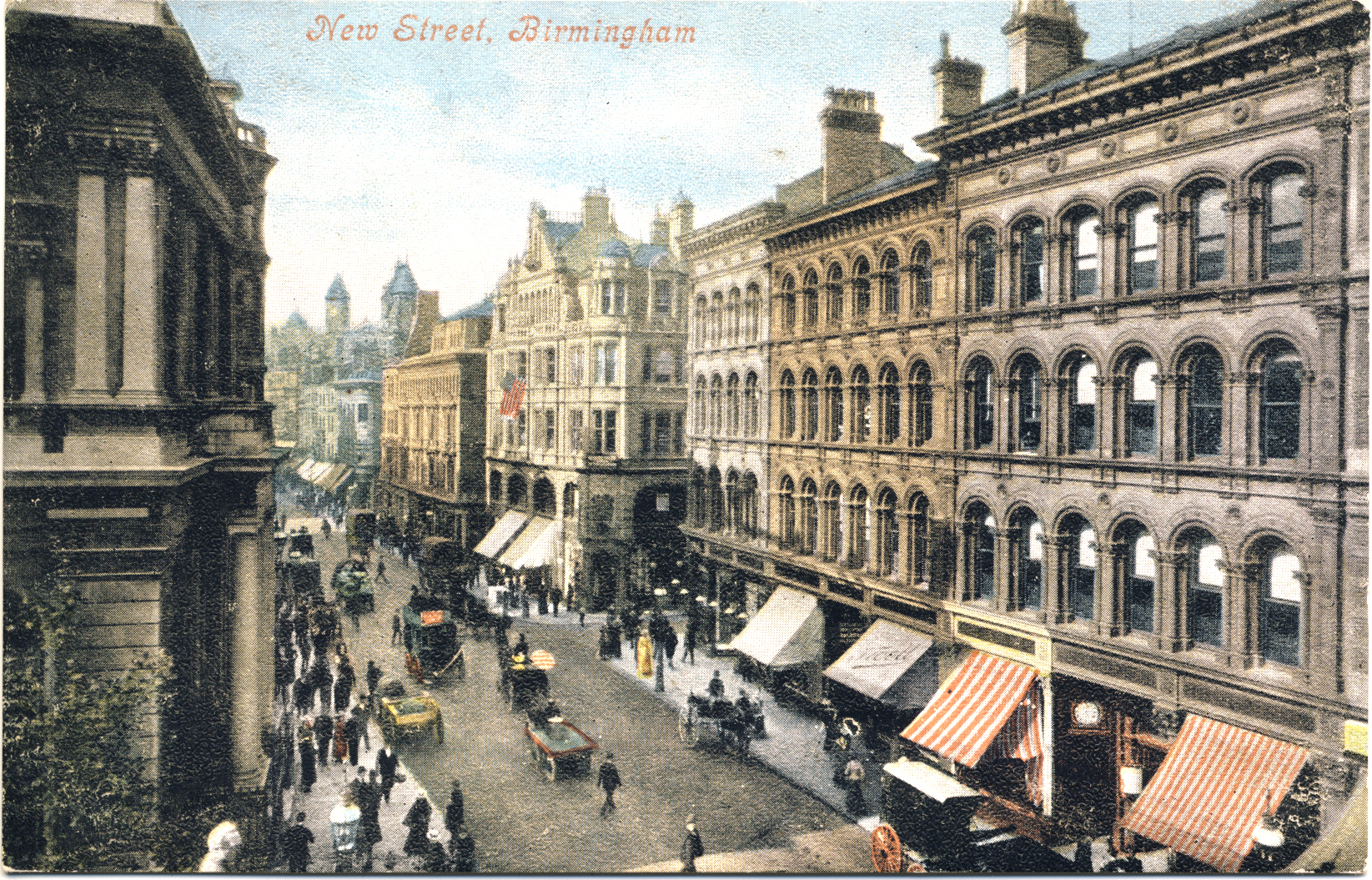 New Street, from the Town Hall end. The railway station is further down and off to the right. Christ Church is seen on the left. Built in 1805, it was demolished in 1898. Christ Church Steps are still there – they were on the far side of the church as seen here. Unused, but evidently before 1898! 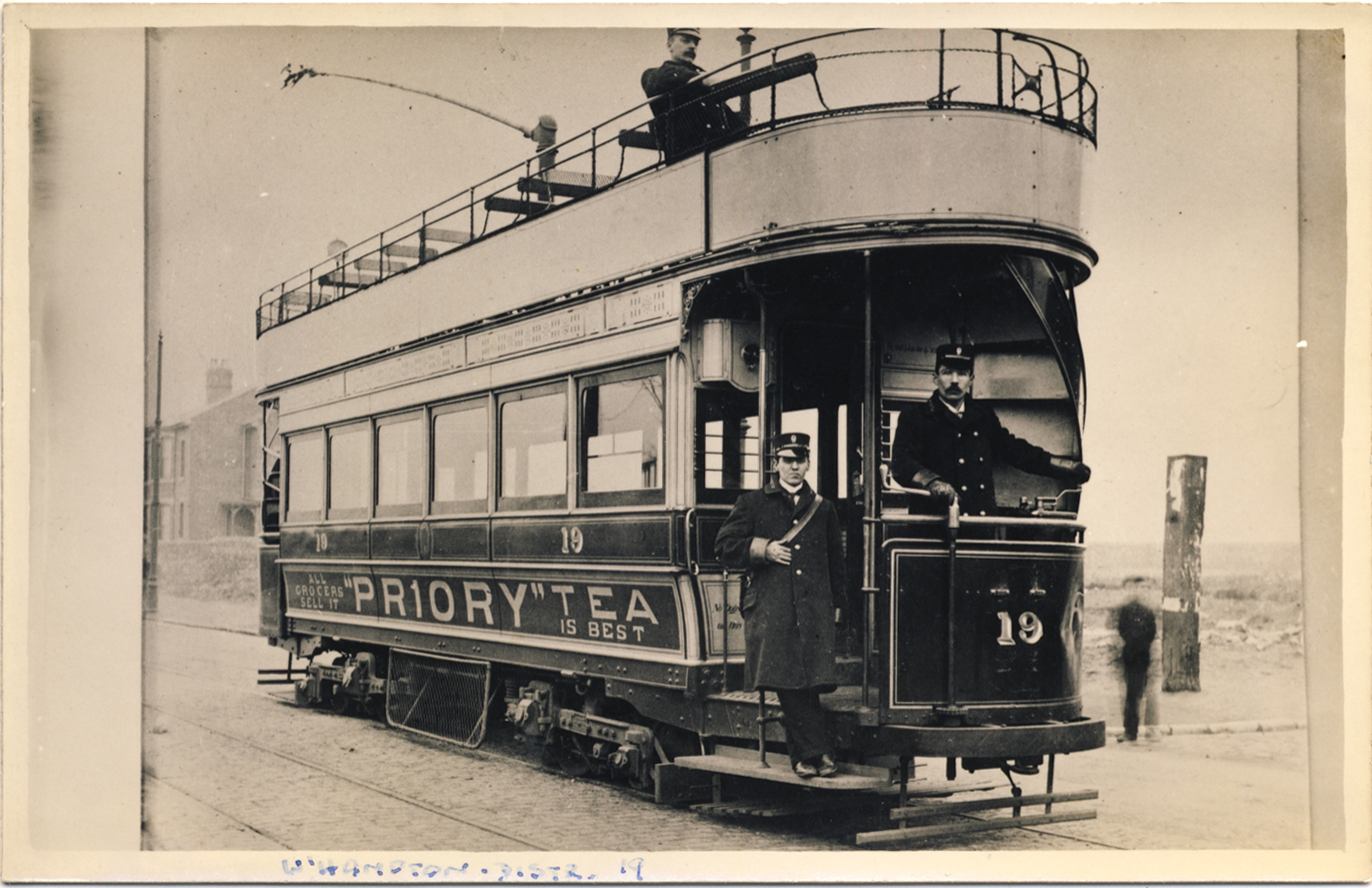 Not a postcard, but a repro. of an early photograph. Electric trams began in Birmingham in 1904. The lines had a 3 foot 6 inch gauge, so classed as narrow. Notice the cobbled street surface. They abounded in Birmingham and elsewhere, and were treacherous to e.g. motor cyclists in the wet, especially as so many vehicles leaked oil in those days. In those days I fell off my motor bike more than once, fortunately without much more than loss of dignity. Once, even, I saw a police motor cyclist fall over. And that reminds me, long ago, we also saw a car which had committed some trivial offence, stopped by a policeman on horse-back, who galloped in front of the car and brought the driver to book! 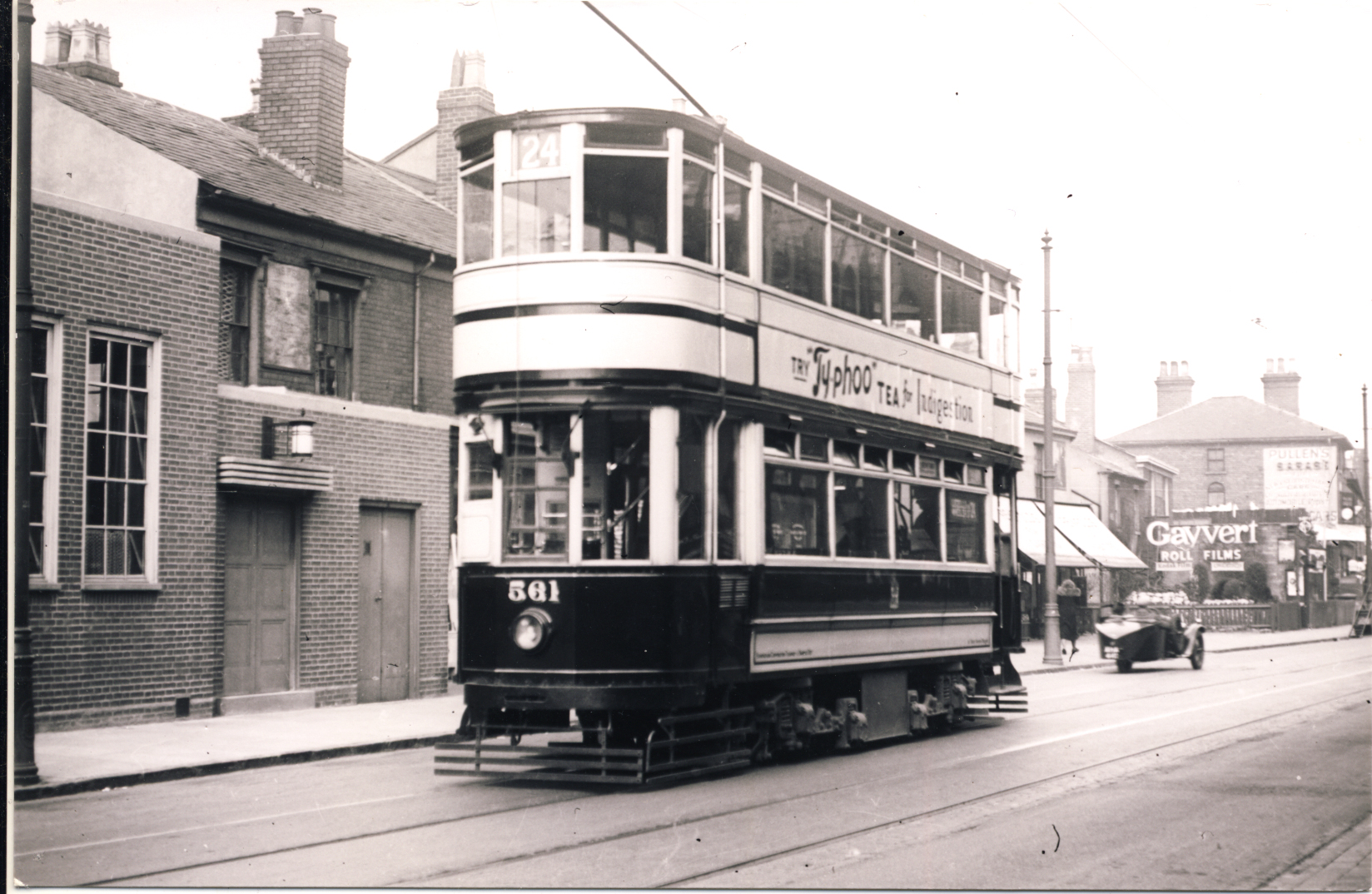 Again out of chronology, another tram, also not a post card, but a photo., helpfully dated on the back 4th April 1938. Note the 3-wheel car. If such a car had not reverse gear, it was classed along with a motor-cycle combination & so could be driven on a motor cycle licence. This regulation was eventually revoked, probably in the late 1950s or early 1960s; but a ‘window’ was provided, by which those who had motorcycle licence could reserve the right to drive a three-wheel vehicle, even if it had reverse. I had my licence enabled in that way, and was therefore legally able to drive a 1949 Reliant van with reverse. Thus, I legally taught myself to drive a car, albeit a three-wheel one. The downside was that it later took me three attempts to pass the Diving Test for a 4-wheel car! 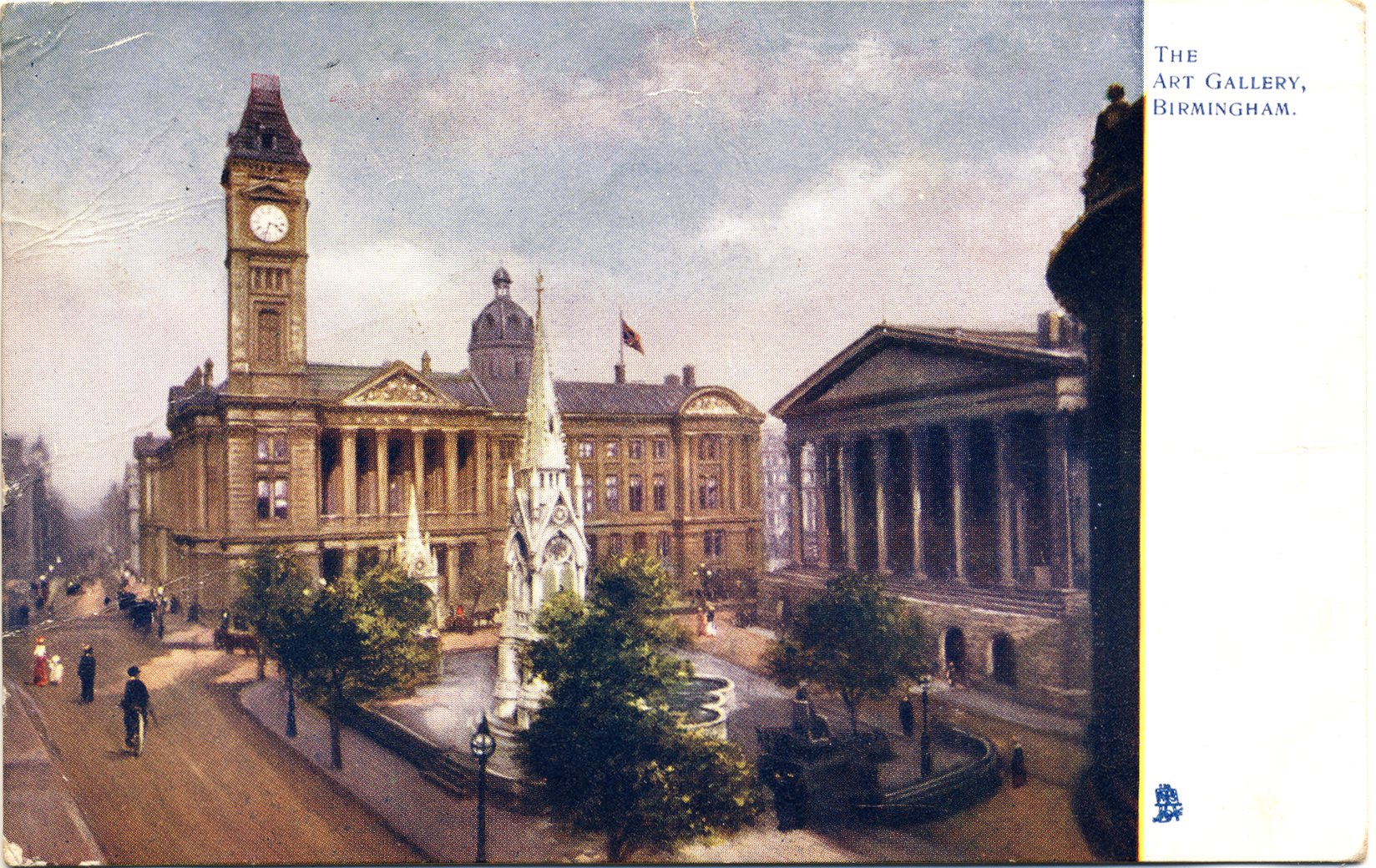 Town Hall, Art Gallery and Chamberlain Memorial. Postmarked 1904. Edmund Street to the left. Later, a covered bridge was built over Edmund Street, to an extension of the Art Gallery. It’s still there. 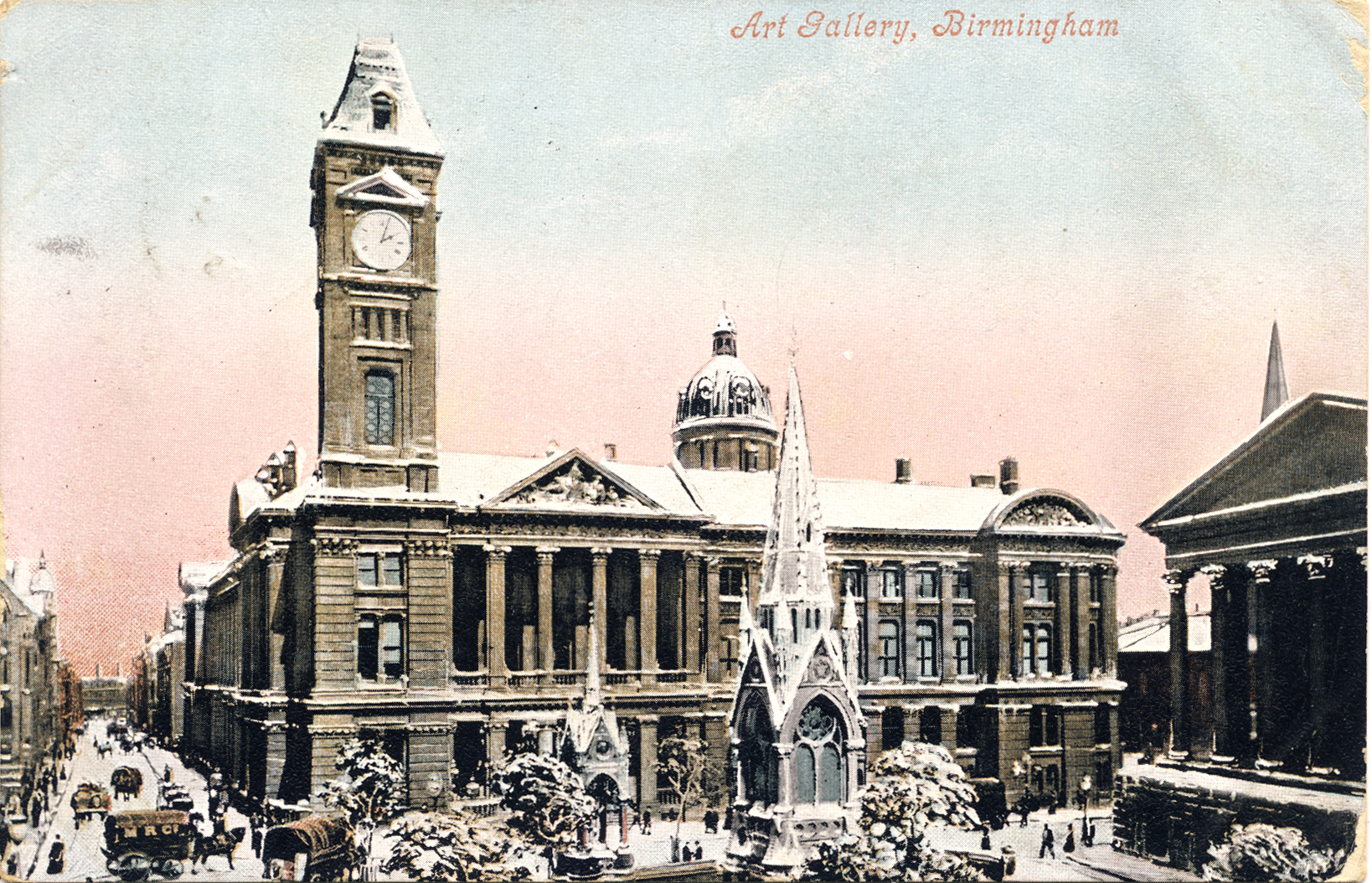 The same in winter. Postmarked 1905. The spire behind the Town Hall would be that of Christ Church, which we have seen was demolished in 1898; therefore this image is earlier than then. Elementary, my dear Watson! 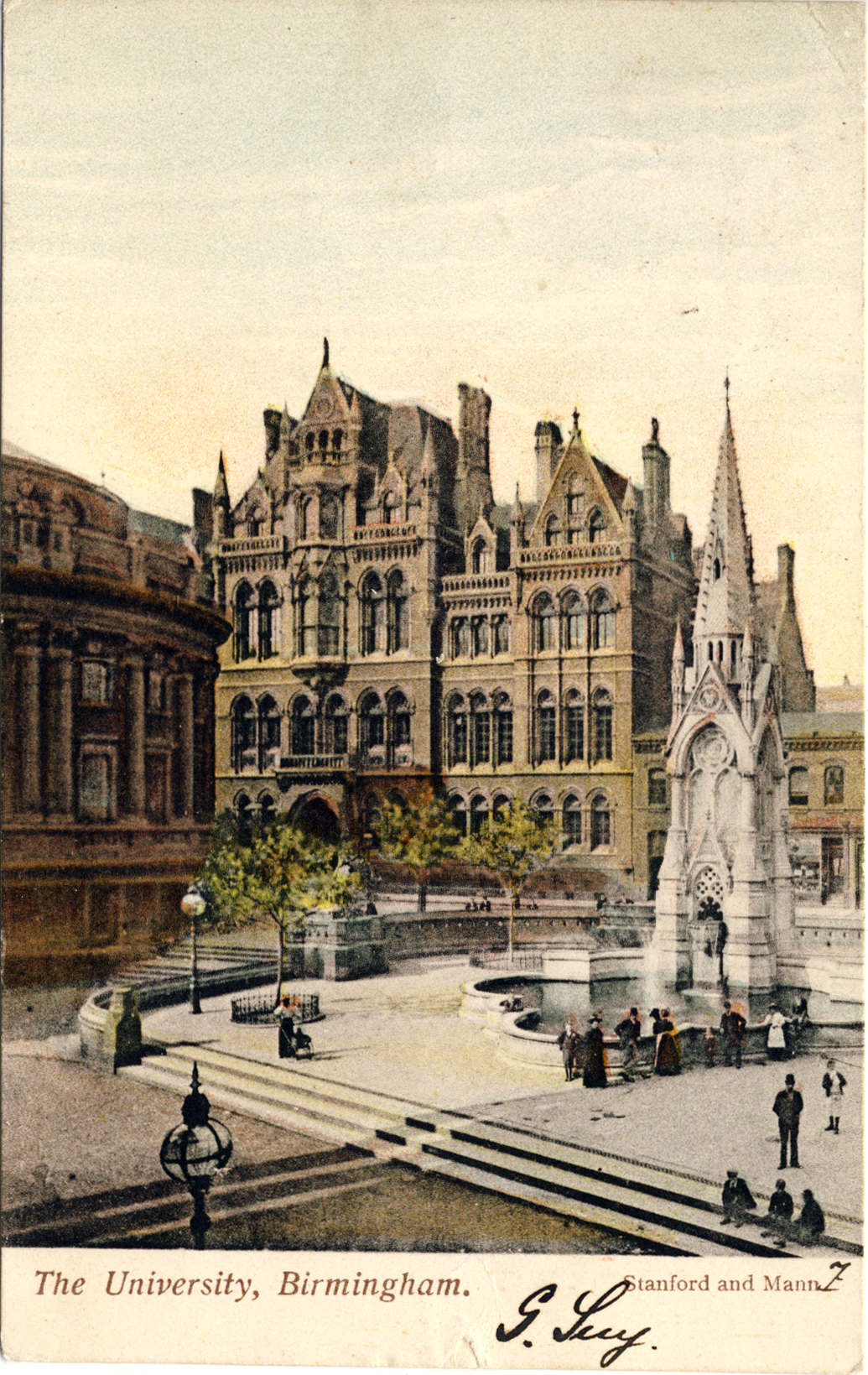 Postmarked 1906, and sent to Brussels. The Chamberlain memorial and Mason College, which became a ‘core’ college of Birmingham University. Mason Science College, opened in 1880, was founded in 1875 by Sir Josiah Mason, industrialist and philanthropist. It remained in use as the Arts and Law faculty of the new Birmingham University for many years. It was demolished in 1964. 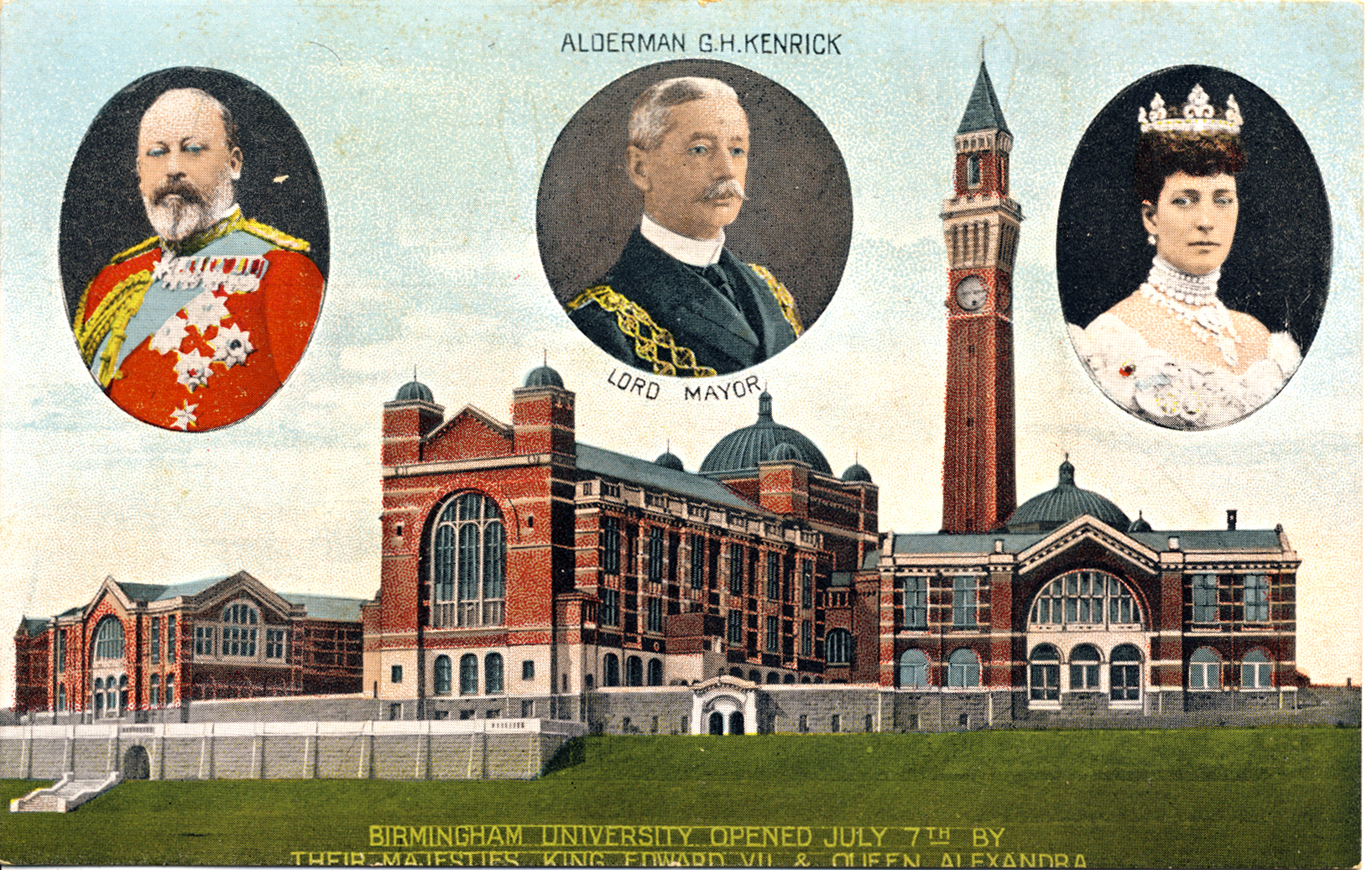 Though unused, this postcard can safely be attributed to 1909, as the main buildings of Birmingham University were opened then. 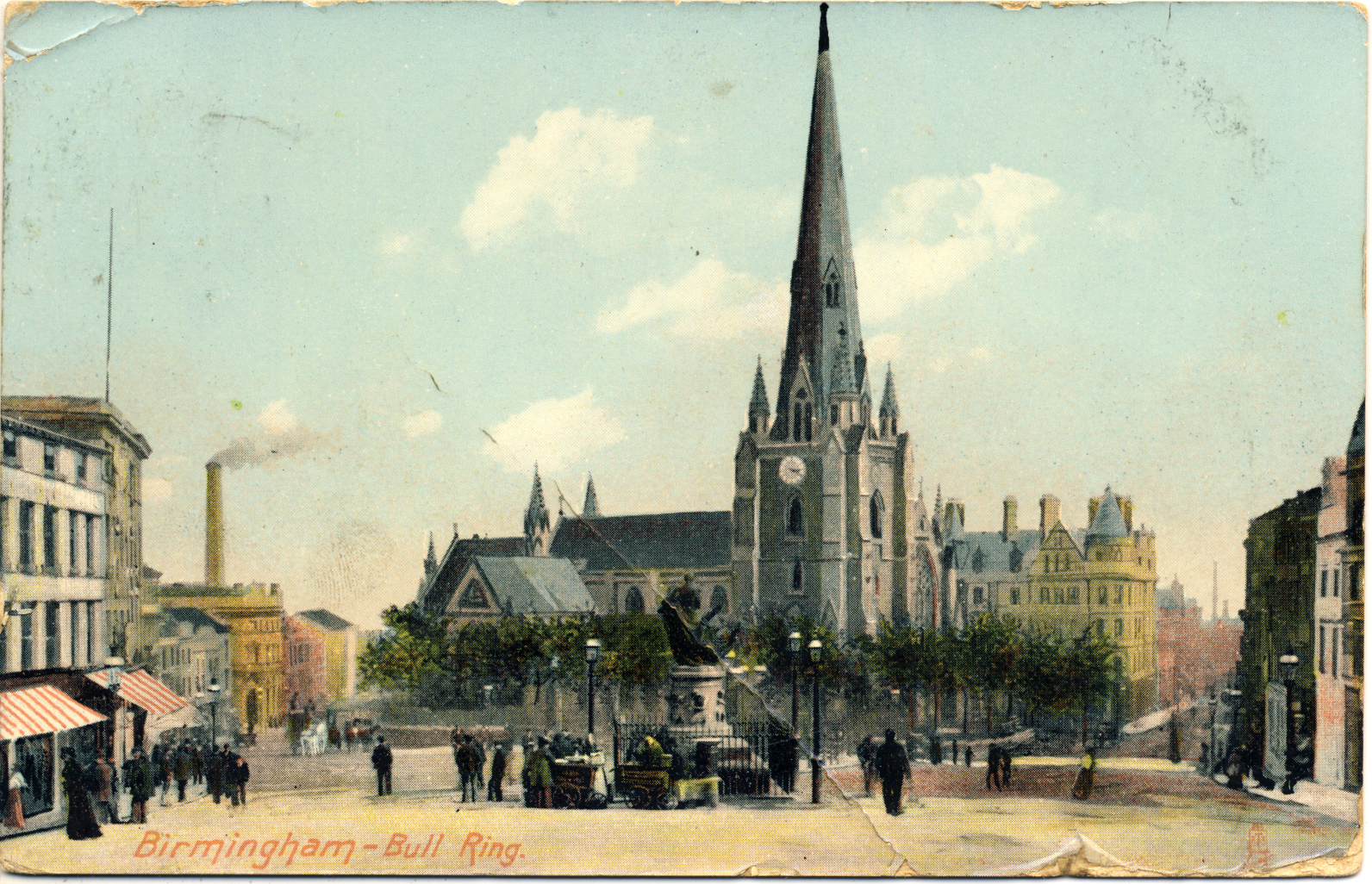 Postmarked 1907. St Martin’s church is, happily, still there. The statue of Admiral Nelson was apparently the first (of many) to be erected to commemorate his attainments. It was the result of a public subscription of £2,500 and was unveiled in 1809. It was moved in 1961 to a walkway in the old Bull Ring centre, and was, I believe, one of two places in Birmingham where, like Hyde Park Corner in London, anyone could address the public and speak freely on any matter. As long as it was not treasonable, blasphemous or subversive. Where the other one was/is I’ll have to research. Nelson currently stands in the New Bull Ring. 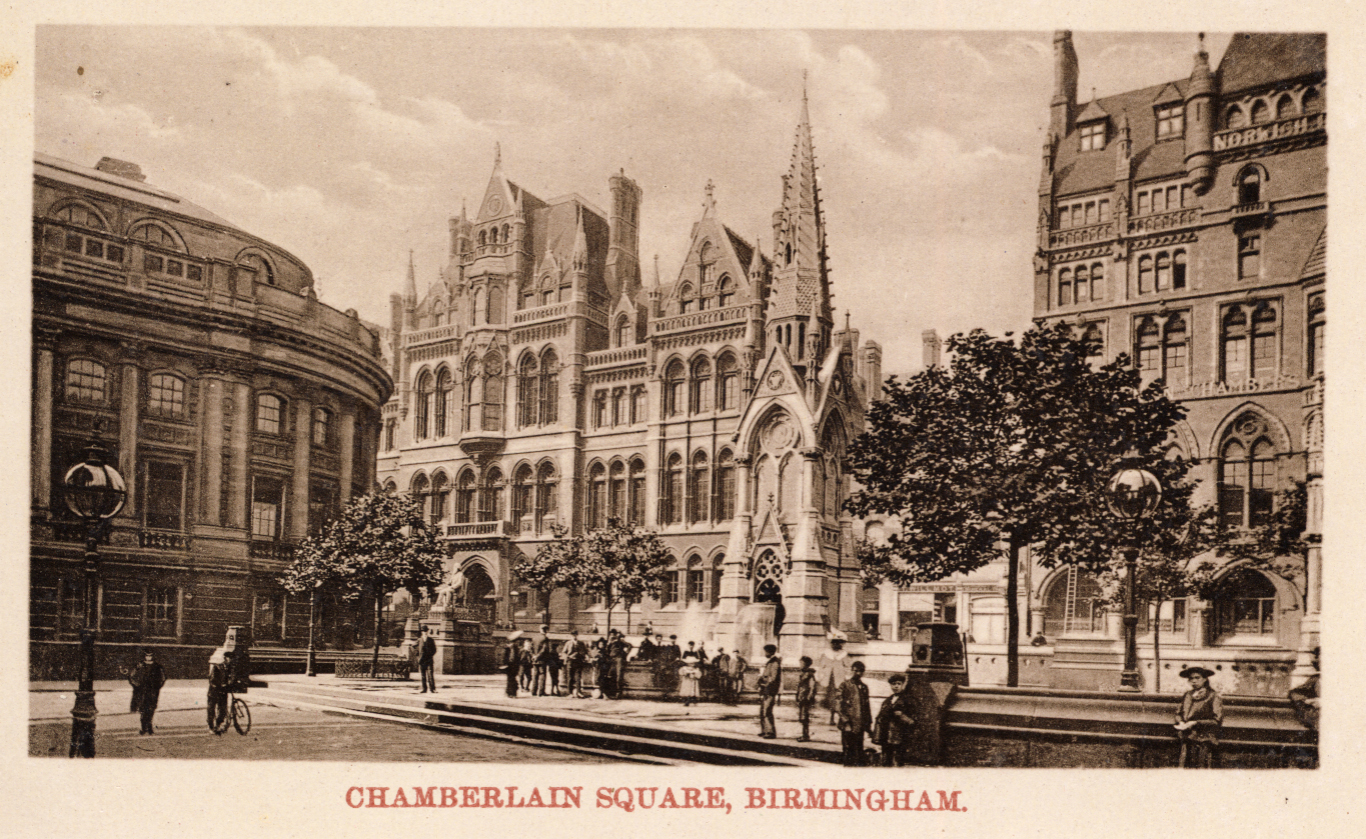 Mason College, the Chamberlain memorial (again), and the rounded building – that might have been the library. Dear me, I must have gone in there but can’t remember; tsk, tsk. 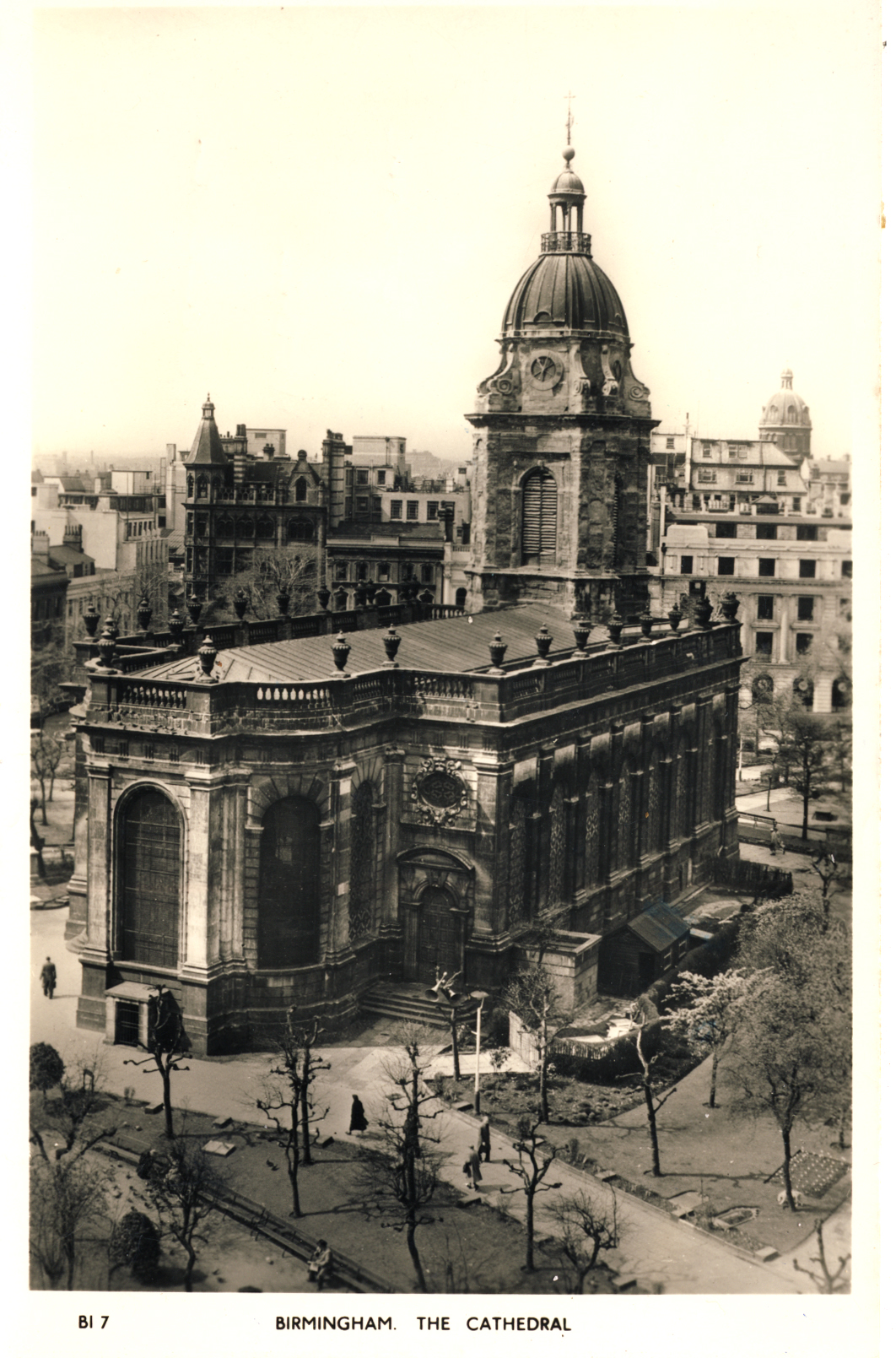 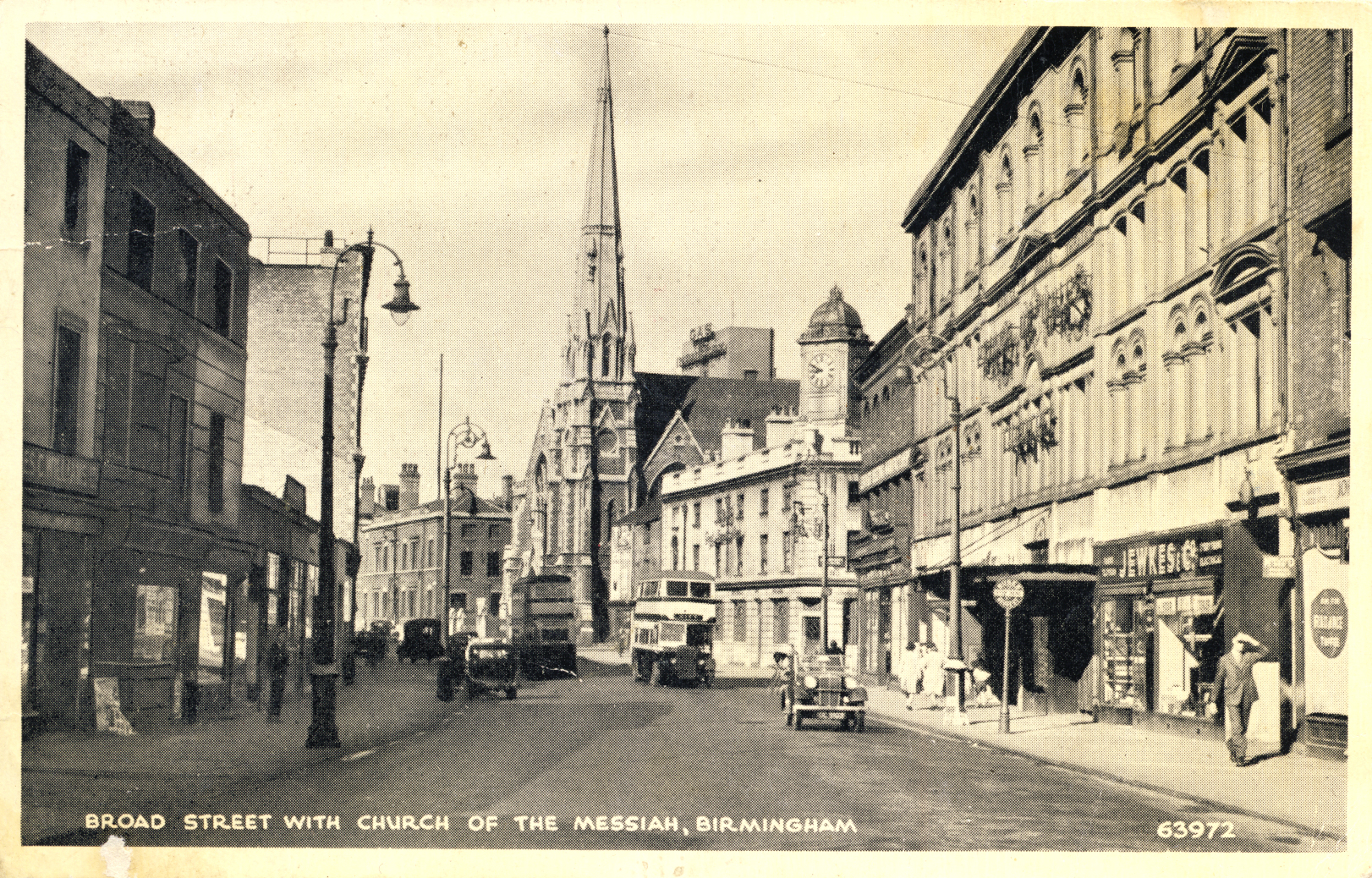 Postmarked 1953. Little is left of this today – mainly The Crown Hotel, with the clock: that was original built in 1781, but rebuilt more than once. Near right is the Prince of Wales Theatre. The church was built over the canal, which crosses from right to left under Broad Street, as it still does. (Need to check the brasshouse). 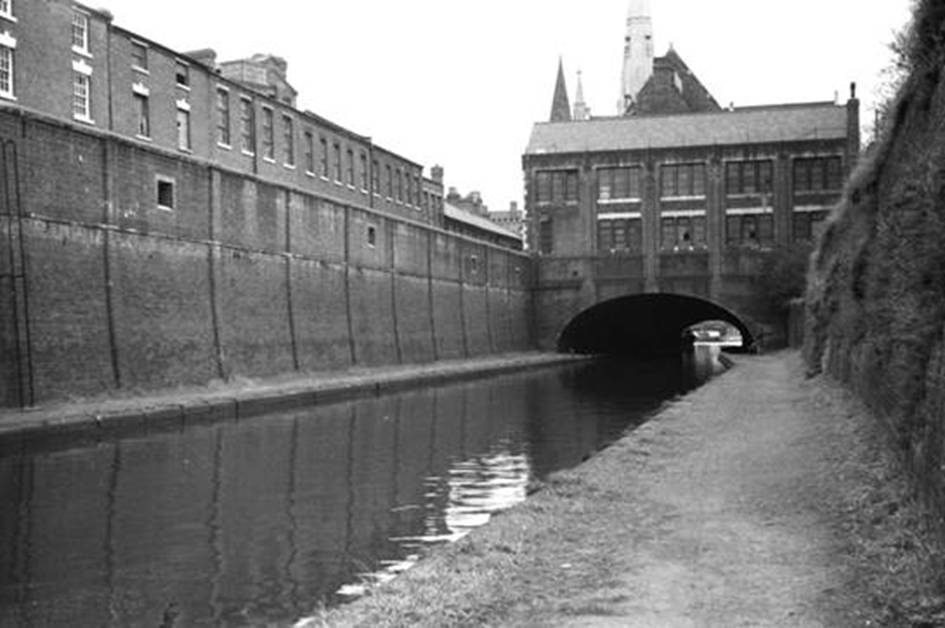 This isn’t a postcard; it’s a shot I took in the early 1970s & shows the church and its Sunday School straddling the canal. The Gas Street Basin is on the other side of the bridge – or tunnel, actually.