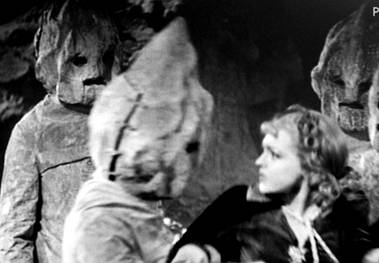 This started sometime around 1951. The Rock Men appear in ‘Flash Gordon Conquers The Universe’ (1940). You know, those guys that live in The Land of The Dead, and wear sort of rough canvas suits, with papier-maché heads with points on, & with eye & mouth-holes in them? They can blend into the rocks, & ordinary people walk past them, not knowing they are there: but then the Rock Men appear from their camouflage, & take them prisoner, in the normal way.

The problem, of course, is that they talk backwards, as you will no doubt remember.

Ever since I first saw the Rock Men at the children’s Saturday morning pictures at the Rex Cinema, Wolverhampton, about 1951 when I was 7 years old, I wondered what they were saying. Doubtless their utterances have baffled generations of Flash Gordon fans. Now I don’t claim any originality for reversing their speech: it must have been done many times over the years. If would have been easy to do it with, say, an early full-track tape recorder; these were around from the later 1940s. And there are many references on the ’net to the fact that their speech is backwards; indeed, there is at least one reference that confirms that they are actually delivering the correct lines in the script, which probably indicates that someone has reversed their dialogue, or else knew of this treatment of the sound track from an early source. However, I could not find any on-line audio samples (which is not to say there aren’t any); hence this page. 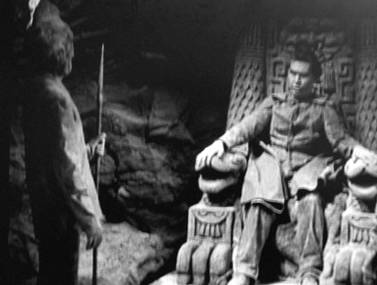 The first crude picture above shows Sonja being captured by the Rock men, immediately after their first appearance – in Episode 7. The picture is crude because – for some reason – my Screen Capture program will not catch stills while you’re watching a DVD; so I have been compelled to photograph the screen of the monitor using a still camera. Sonja (played by Anne Gwynne) is actually a ‘baddie’, but that’s not important right now. (Actually, Anne Gwynne is extremely well cast in this role. She is very beautiful, and has lovely, wide-spaced eyes, and a fine, lithe, compact figure. Also, she acts better than many characters in this serial, even while playing a difficult ‘subversive’ part. She was only 20 years old when she made this serial. I have a feeling she may have been recruited into Hollywood because she might have been seen as a younger alternative to Mae West, who she resembled to some extent. She died as recently as 2003, and when I first wrote this page you used to be able to visit a website devoted to her at www.annegwynne.com. But when I revised this page today, it was discovered that there is now another & different site with this address.)

We chose this short scene to test our admittedly simple translation technique. Also, it really will be necessary to translate at least one of the scenes where Dr. Zarkov speaks this language. He, of course, knew that the Rock Men were most likely a relict of a primitive but widespread culture that once lived on all habitable planets in the Solar System. He even knew their language, since he pointed out that on Earth, the survivors of that culture lived in the Gobi Desert: some of them, along with their language, had obviously survived until modern times. Naturally, the great polymath Zarkov * had learned their language & added it to his amazing & versatile fund of knowledge. Incidentally, the bizarre form of these aborigines on Mongo is peculiar to that planet; they were forced to adopt this camouflage disguise in order to escape detection by the very big small lizards that lived there. (All this is now covered in the video below) Their disconcerting outward appearance is, therefore, in no way comparable to the Clay Men of Mars, who appeared in the previous Flash Gordon serial. Those Clay Men had been evilly transformed from regular men into Clay Men by the magic powers of Queen Azura; while the Rock Men of Mongo had adopted their appearance voluntarily, albeit reluctantly. But I digress… 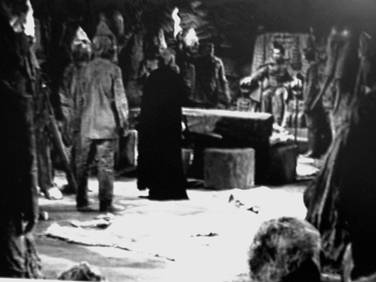 The pictures above show the King of the Rock Men on his most impressive stone throne, putting us much in mind of an Aztec sort of thing. I wonder, in what film it had already appeared? If it was constructed just for FGCTU †, then it was most commendable.

The dialogue you will presently hear begins around this point. Incidentally, it seems to me that the Rock Men occupy, on Mongo, a position analogous to American Indians. The actors who play the parts of the Rock Men, when seen (rarely) without their heads, tend to resemble the actors who played Indians in ‘Westerns’. And as you will hear, they indubitably talk in the same fashion. Here we go…

It was amusing when I first reversed the original .wav file. If you take a whole scene with Rock Men dialogue and reverse the sound track, the Rock Men’s speech becomes intelligible to us, which was great. But unfortunately, the lines are also reversed, and so the script is given as if time is travelling backwards. The absurdity of an answer to a question being given before it has been asked, needs hardly to be emphasised. Also, of course, the background music is reversed… So what you have to do is to copy out each piece of their speech to a new file. Reverse it, then paste it back in over the original, and bingo!

* The following is for Flash Gordon anoraks only. I have seen Dr. Zarkov’s first name given as Hans on more than one website. But early in ‘Flash Gordon’s Trip to Mars’ (1938), he is called Alexis Zarkov – both in the ‘voice-over’, and also visually. It may be a little-known fact, but Zarkov and Flash shared a flat (apartment) – or at least they did circa 1938 – and the door bears the names: ‘Flash Gordon; Dr Alexis Zarkov’. (My italics. Also ‘Alexis Zarkov’ is a much more plausible name for him, as it is entirely Russian in origin; even though his real name was Frank Shannon, and he speaks with the appropriate southern Irish accent).

N.B. There are still persistent Flash Gordon enthusiasts, and one of them wrote in saying it would have been easier to reverse the speech than I thought. He pointed out that it could be done by playing a 35mm film the ‘wrong way round’; the sound track would then be played backwards.