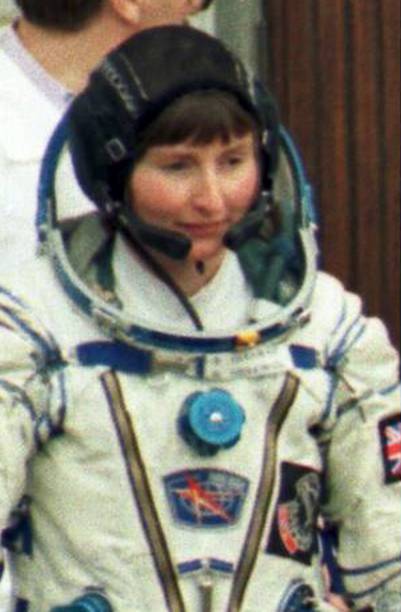 Event of 22nd May 1991. This is the second webpage to be uploaded today, which is almost certainly a record! (The other one, ‘Listen to that Shooting Star’ may be found under the ‘Other Things’ tab.) The explanation is simple: the first led inevitable to this second one. In the first, we remarked on how radio transmissions from high up in the sky, may be received over a surprisingly large area of the earth below. We were then talking about a burst of low frequency radio waves being created by the burning up of a meteoroid in the earth’s atmosphere. This naturally led us to remember 22nd May 1991, when we recorded a few transmissions from the Russian MIR space station. The first British Astronaut, Helen Sharman, was present on it, and operated amateur radio with the call-sign GB1MIR, when her other duties on the space station permitted. This was long before we were ‘on-line’, but somehow knew that these transmissions to certain scheduled British amateur stations (with special call-signs) were being made. So, with thousands of others, we kept watch on the designated frequency, which was in the 144 -146 MHz (2 metre) amateur VHF band. A number of short fragments were recorded on cassette from my modest Kenwood TM-241E. I still have it, and it works 20-odd years later just as well as it ever did *. The cassette, however, proved quite difficult to find; but after an hour of ransacking dusty boxes we finally succeeded, knowing that we would never have discarded such an historic recording…

A link to an mp3 of the longest (and best recorded) example is given below. It was evident from her comments (even in this short extract), that she was having trouble receiving transmissions from the ground. While ground stations, on the other hand, could hear GB1MIR very well, as long as it was within ‘line of sight’. I think the answer to this just might have been that scores (if not hundreds) of terrestrial amateur stations were calling her, in spite of the fact that she was addressing her calls to specific stations in the UK, GB1JUNO, GB8JUNO &c. Still, it is not given to every radio amateur to make contact with a Space Station; so I have the distinct notion that amateurs in many countries were calling GB1MIR ‘on spec’, as it were. Many stations calling on the same frequency in FM mode would unfortunately have resulted in chaotic noise being received on that frequency on MIR.

Still, we can hear, from 22 years ago, the thrill of the occasion! Just start the audio clip below.

* After many years (though not as many as 22), my Kenwood TM-241E began to suffer from a garbled LCD display. Sometimes it was OK, sometimes it would go haywire & all the segments would display at the same time, which was very disconcerting. In the end, we thought it was probably worn out. After all, we had had it for many years, and had no complaints about its service until this ‘fault’ arose. Still, we decided to look on-line, in case there was anything to be found about this behavior. To cut a long story short, we discovered that there is a memory battery in it; and naturally, it will eventually run down. A battery life of, in our case, perhaps 12 – 15 years was extremely commendable. The main symptom of its démise is – yes, you guessed; a garbled LCD display. The battery is the very common & cheap CR-2032 button or coin type. People in the know have purchased ‘garbled display’ TM241E’s for a few pounds at Radio Rallies & have had them up and running again, as sweet as a nut, the next day! But on-line sources warned that replacing it was not a task for the faint-hearted. It necessitates not only removing the front panel, but also the sub-front panel which lies behind it, &c., &c. Well, to be honest, having had already had very good service out of it, there seemed little to be lost, and so we dismantled it, following instructions to be found on-line. And finally succeeded in replacing the battery! Mind you, one of the tiny buttons on the top left escaped, as you can see from the image. I know exactly where it is; couldn’t find it at the time, but about a year later, while looking for a screwdriver that had gone under the bench, we saw the tiny button in the corner. It remains there to this day; the idea of even partly repeating the dismantling procedure in order to replace it is, frankly, unprepossessing. And the main function of that button (whatever it is) is present on the microphone anyway, so what the heck!

Note Added 27th October 2017. The TM241 finally gave up the ghost altogether. It was replaced by a Yeasu FT-2900 at a small fraction of the cost. This is working well, though we are not very active on amateur radio at the moment.