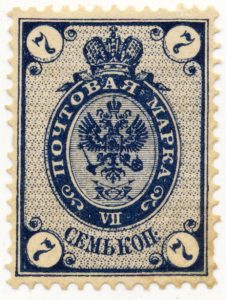 Well: the answer is simple. History is embodied in them, just as it is in coins & all sorts of other artifacts. Here is a 7 kopeck stamp from Russia, which I believe was current in 1894, when the ill-fated Nicholas II became ‘The Tsar Of All The Russias’. (I have always preferred the archaic ‘Czar’; but there is a point beyond which it becomes fatuous to cling to these obsolescences.) Unlike our pioneering British stamps of 1840, which carried from the first a distinguished profile of Queen Victoria, it bears no likeness of Nicholas; indeed, no postage stamp of Imperial Russia had ever borne the Tsar’s portrait since their introduction in 1858. Doubtless the Imperial Visage was considered too Sacred to appear upon such a lowly item as a postage stamp? Instead, the Imperial Arms of Russia always appeared as the focus of the design. (Immediately under the Arms may be seen the post-horns and ‘electric flashes’ of the Ministry of Posts & Telegraphs.) 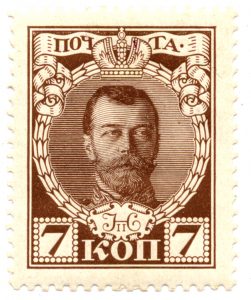 However, 1913 represented the 300th Anniversary of the Romanov Dynasty. And, as you will be well aware, things were not going too well in Russia at that time. Accordingly, a large set of commemorative stamps was then issued, which were calculated to appeal to the mass population. There were (I think) 16 different stamps in the set. A portrait of Nicholas II (and of many other famous Tsars, plus 2 or 3 historic sites) finally appeared on Russian stamps. I don’t actually collect stamps (any more than I collect coins) but the possession of just a few of these items serves to reflect & amplify the historical period which gave rise to them? I have about 11 of the set of 16 & that’s fine; I don’t worry about the missing ones, especially because they are the most expensive ones! 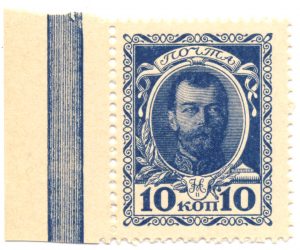 Nicholas appeared on the 7 kopeck & 10 kopeck values. There came the outbreak of The Great War in August 1914, in which humanity was to suffer as never before. The Russian Empire disintegrated, slowly & agonizingly. The above 10 kopeck ‘postage stamp’ is actually printed on card rather than paper, and these (with 2 other values: 15 & 20 kopecks) were put into circulation as a substitute for coinage. Metal was no longer available to mint coins… 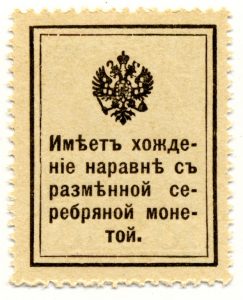 This is the reverse of such a ‘card money’. It reads to the effect that this item ‘is equivalent in value to the denomination of the stamp’, or something similar. So: in just four ‘postage stamps’, we may roughly chart the peak of a vast Empire, followed by its decline & eventual fall. No wonder philately & numismatics &c. are so universally popular. As it were, we can experience history from our own living room!