30th July 2007. A much needed day off. The sun shone intermittently this morning, so after a leisurely morning we mounted our trusty bicycle and pedalled the short distance to the Harborne Nature Reserve. This consists of a portion of the Chad Valley on the border of Harborne and Edgbaston. It is steep-sided and so cannot be reclaimed for building land. This must be very irritating for property developers, as the area is a very desirable one. The benefit has, instead, fallen to local residents, who may take a stroll there every so often and watch the progress of the seasons, as Dame Nature ordains them. Here is a shot of one of the paths through the largely-wooded area.

The photo. was taken while the sun was in. The area of herbage to the right is as good as a hedge, and it was not long after the sun came out that we saw a few butterflies passing over it. A Small Copper (Lycaena phlaeas) settled at one time, but out of reach of the camera. It flew off and did not return. But now that we have become an expert at recognising the Gatekeeper butterfly – well, since yesterday anyway! – we could see one or two of those patrolling, and eventually one settled in a convenient place. Of course I know most of the butterflies that are easy to identify at a distance. Imagine the thrill I got when I saw my first Danaus plexippus, the Monarch butterfly, on the wing. There was no mistaking that! Perhaps I should add that this occurred in the United States and not here in England, where it an exceptional rarity!☺ But alas, I have never sorted out our common things like the Gatekeeper, the Meadow Brown, the Grayling, the Wall, &c. So now having firmly got the Gatekeeper in our heads, we must mount an expedition into the countryside and look for the others. Anyway, this Birmingham Gatekeeper had slightly different markings to the Gloucestershire – Oxfordshire one of yesterday, so we will put the two side by side for comparison. 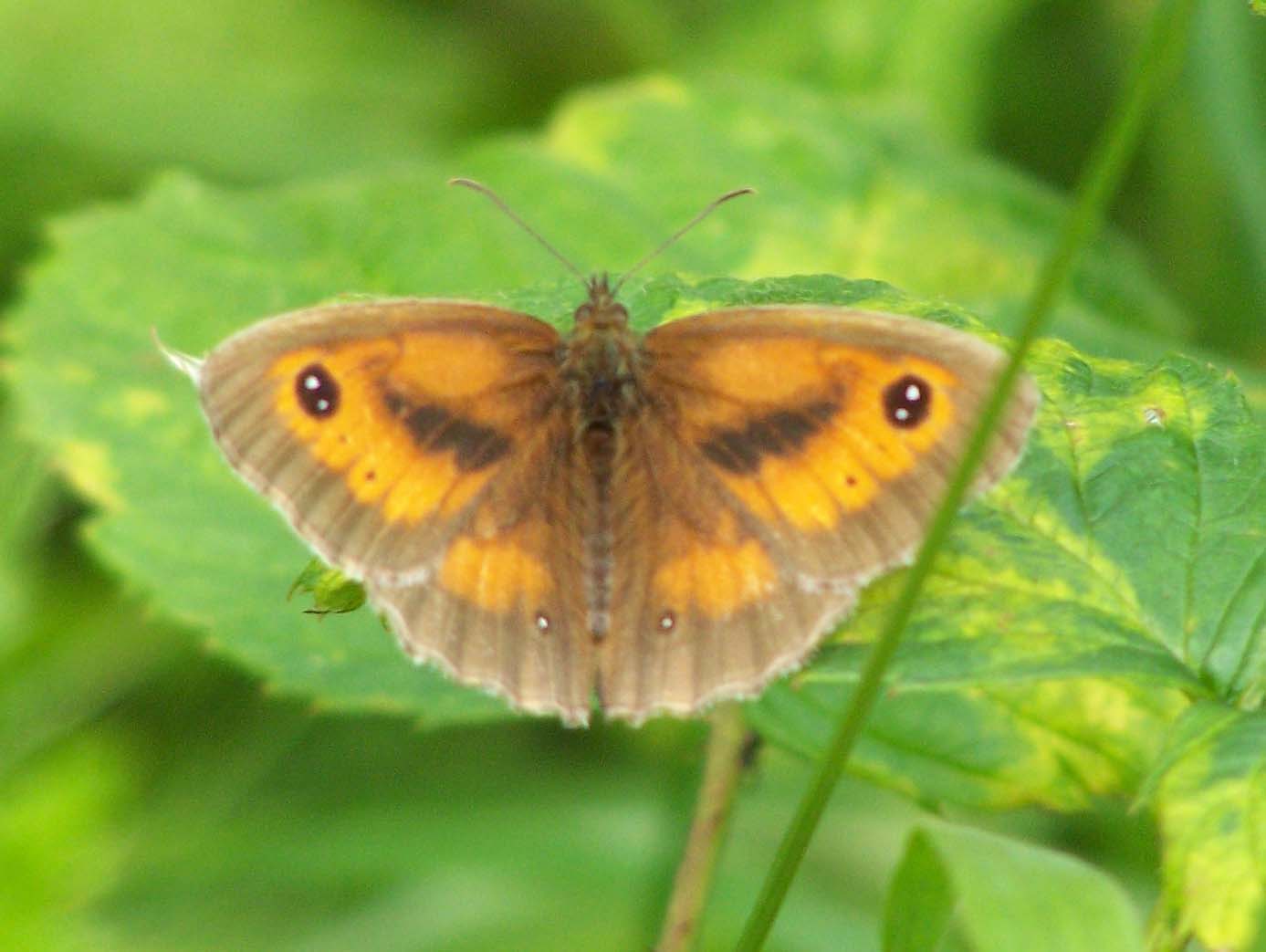 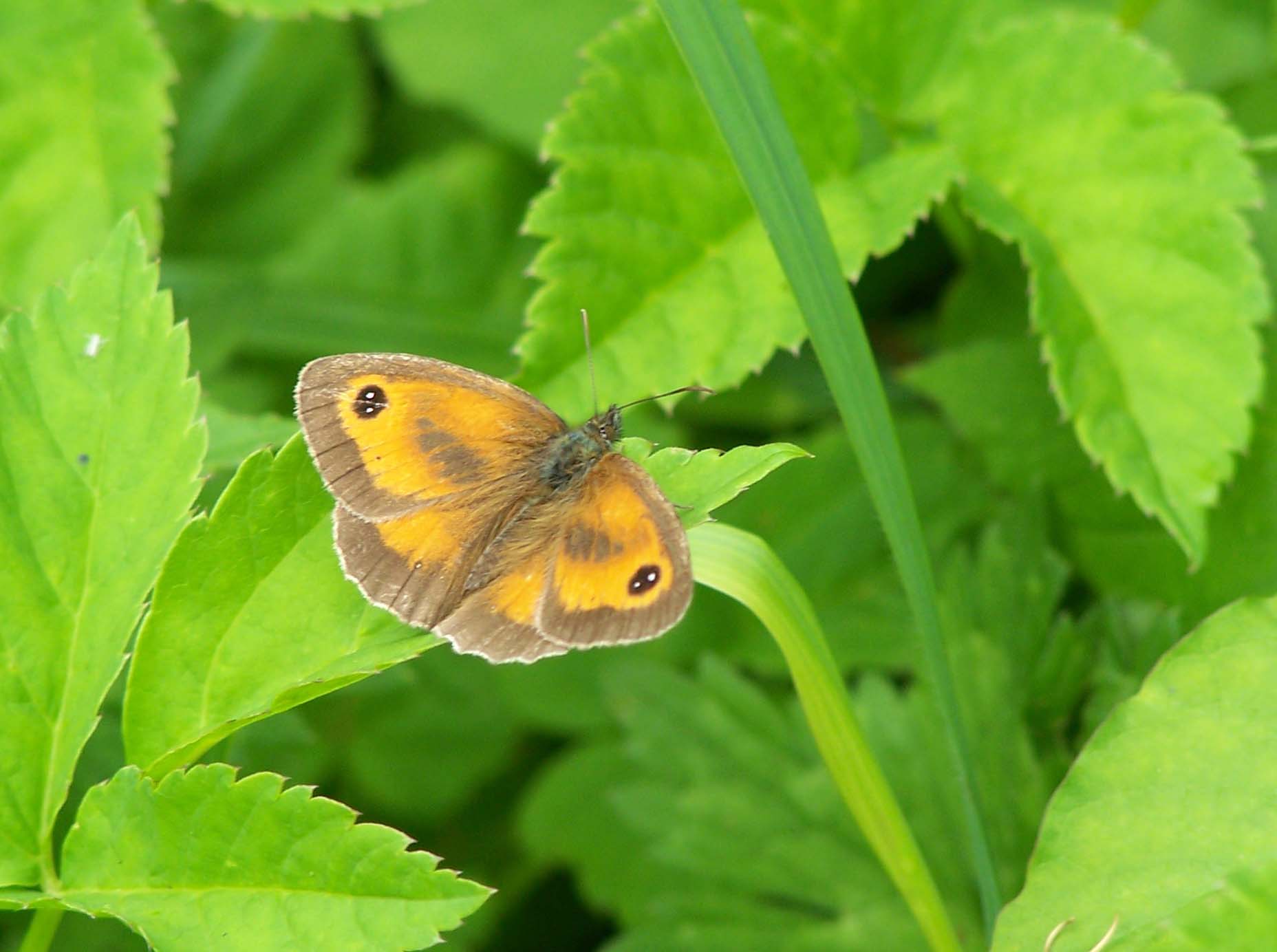 The new one on the left, which is also a male, has a small ‘eye spot’ on each hindwind. These are virtually absent from the one on the right. Also it has two dots below & in line with the ‘eye spots’ on the forewing, while the one on the right seems to have only one. These differences are of course trivial. At least as far as I know, he added hastily. ☺ One other butterfly very common around here is the Speckled Wood (Parargra aegeria); indeed, they are to be found in my back garden and one actually flew into the living room yesterday morning. I was hoping one would turn up today, and sure enough, we were lucky! Lastly, here is Ragonycha fulva, the Soldier Beetle, browsing on Heracleum sphondylium, Hogweed. First we tentatively identified the plant from our reference book as Hogweed, then looked for the beetle. The entry for the beetle reads in part: “…often to be found on wild flowers, especially Hogweed and other umbellifers…” It is pleasant when two diagnostics retrospectively confirm each other! 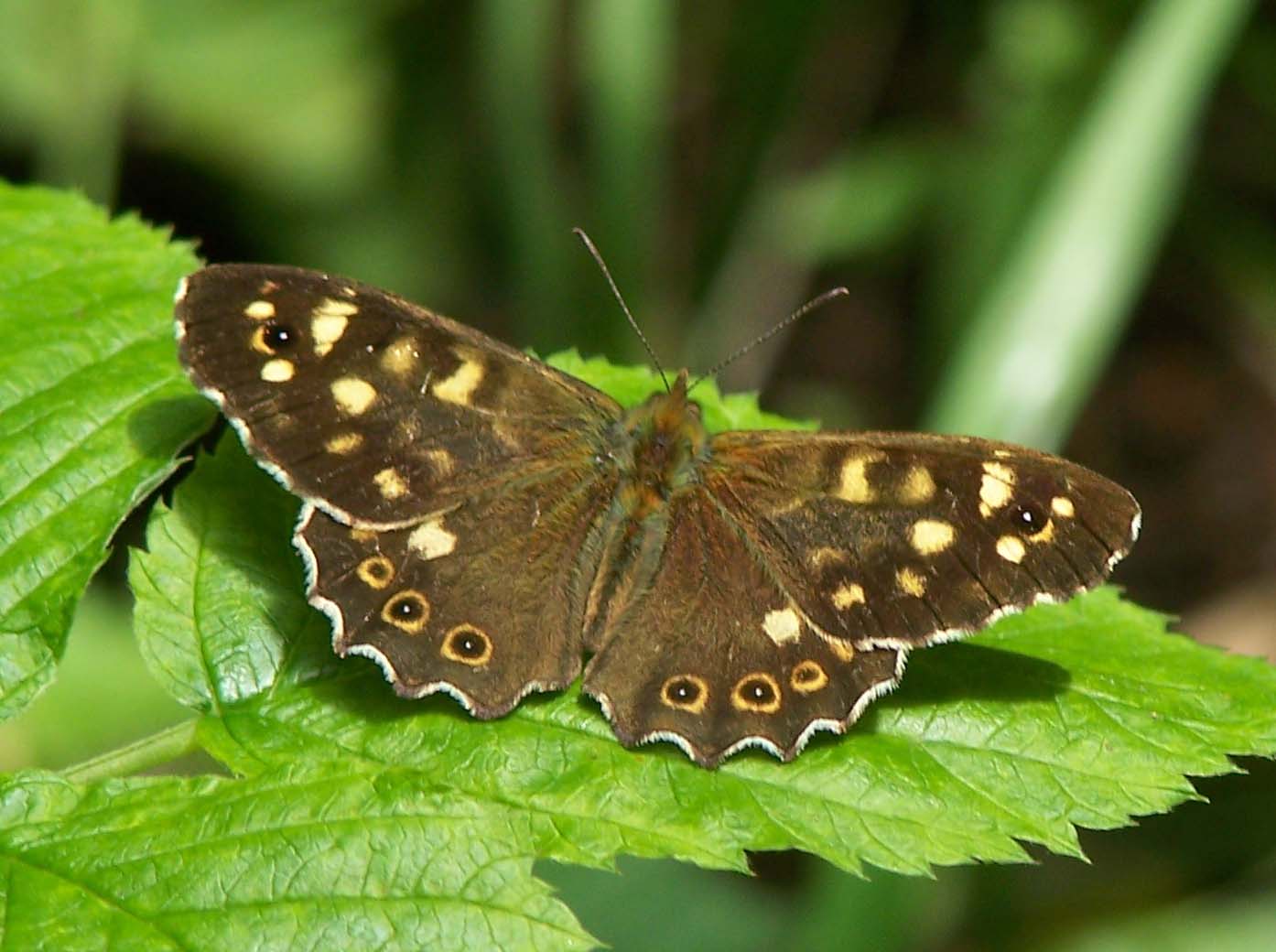 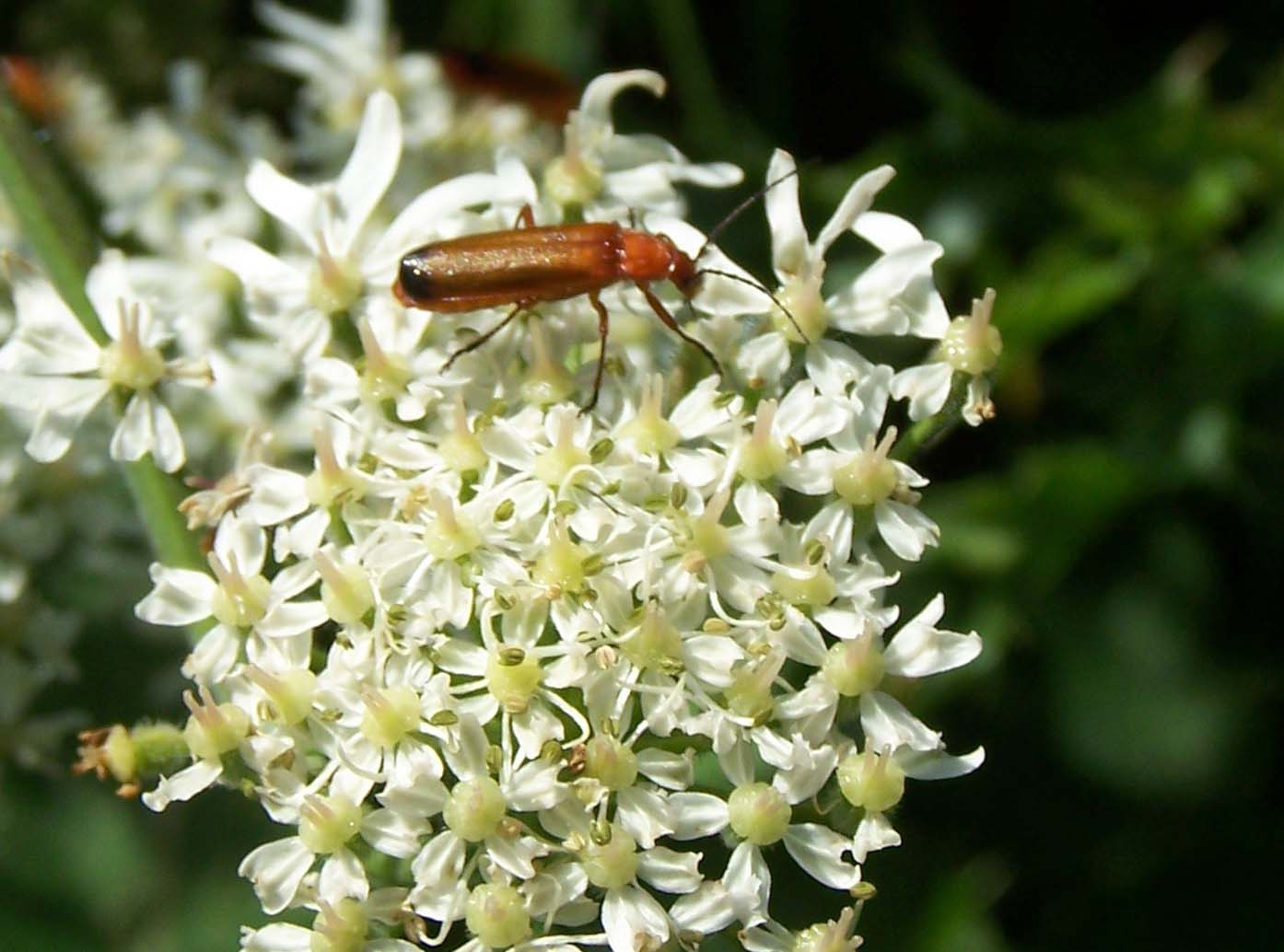 31st July 2007. Today we visited the Edgbaston reservoir. It was constructed in order to help maintain the level of water in the Birmingham canal system. We managed to shoot another Speckled Wood at rest with its wings vertical. Going off at a tangent, Edgbaston is of course prime Tolkein territory. That is J.R.R. Tolkein, author of ‘The Hobbit’ and ‘Lord of the Rings’. This other shot shows at right, the tower of the Waterworks, which is adjacent to the reservoir *, and at left, ‘Perrot’s Folly’, which was built in 1758 by landowner John Perrot. It is just under 100 feet (~30m) tall, and he is thought to have used it as an astronomical observatory. It is widely held that these inspired Tolkein’s ‘Two Towers’, and as he definitely incorporated many memories, impressions and characters from his life in his works of fiction, that explanation seems highly likely. The shot is taken looking south along the top of the dam, which is at the north-east corner of the reservoir. 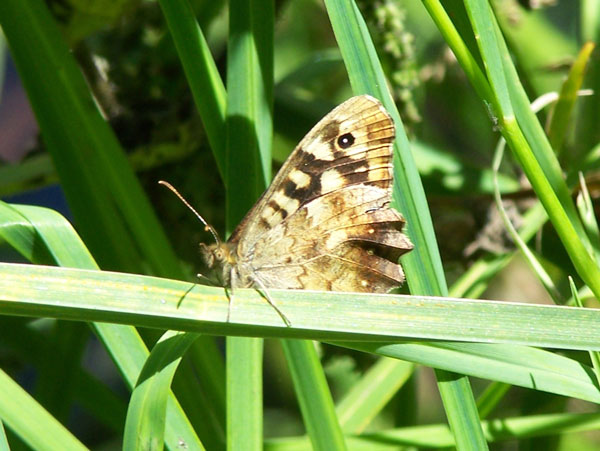 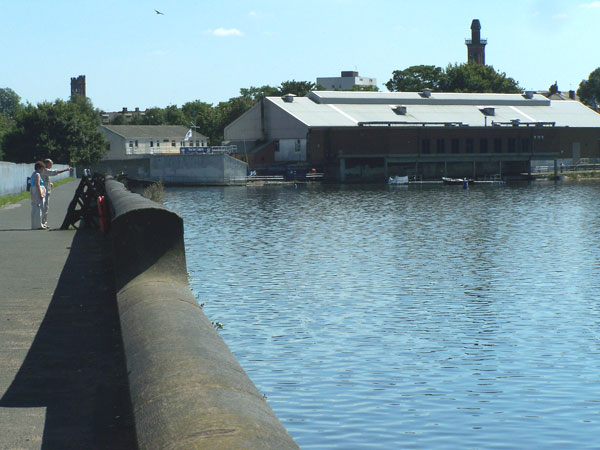 * The canal reservoir was built by Telford in the 1820s. The Waterworks is ca.1870s. The only thing they have in common is that they are located at a high point, which is good for distributing water by gravity.