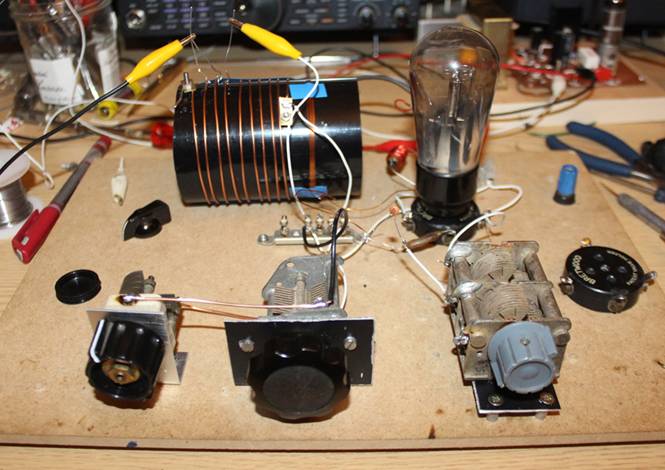 “Wireless (or radio) was really begun,
By Marconi – in nineteen hundred and one.”

Actually, it wasn’t, not when you really get down to it. Any more than Thomas Edison invented sound recording in 1877, or John Logie Baird invented television in 1925 (or whenever it was), plus lots of other similar things. What those guys mostly did, was to put together other things that had already been known before, add a bit of their own, and make a practical demonstration of the thing in question. If you live in Russia, your encyclopaedia will probably tell you that radio was invented by Alexander Popov (1859-1906), while in France, Edouard Branly (1844-1940) is favoured. And in the U.S.A., Nikola Tesla (1846-1943) is often quoted as having priority &c., &c. However, it is not the purpose of this short page to raise arguments. No; we included the rhyming couplet above, because we shall write briefly about radio, and I learned that couplet from a children’s book I was given, more years ago than I care to remember. There was a couple of pages of cartoons of historical events, each of which had an amusing mnemonic. Here are some more of them – I can still remember them after 60 years!

“The English thought the Scots unsportin’
at Bannockburn in thirteen fourteen.”

“You might have seen Julius Caesar arrive,
if you had lived in B.C. 55.”

BTW, I’ve searched in vain for the title of that book for at least thirty years in order to get another copy, but in vain. Should you, dear reader, have any idea what it was do please let me know! It also had some illustrations by Rowland Emett, which I suppose is one way forward… But to work.

As yet, very little about wireless – or radio – appears on this site, which is curious, as it’s my second-most-important hobby interest. Yet we still occasionally tinker about with radio, mostly vintage radio, and we did so yesterday and today. The result you see in the piece of junk at the top of the page. Yet, curiously, it works! Researching old issues of the ‘Wireless World’ magazine for another purpose, we came across a circuit for a two-valve short-wave receiver in the issue of 29th June 1927. In the quiet aftermath of an enjoyable Christmas, what could be more diverting than to try to ‘knock it up’ from the bits & pieces lying around here?

We have already dabbled around with this sort of thing – see below for the links to six YouTube videos, which (at inordinate length) progress from a long wave crystal set to a two valve loudspeaker set for medium wave, mostly based on 1920s & 1930s components. But the short waves! Ah – the thrill of easy long-distance reception is difficult to describe. So we knocked up this bird’s nest. Now, even in 1927, they knew that to get down to say 20 metres, such a set had to be built very rigidly indeed, and enclosed in a metal box to ensure stability. But we thought we would see what we could get, with just one valve, before going to those lengths. 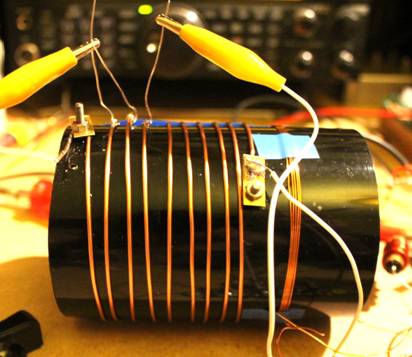 The coil prescribed in the Wireless World had only 9 turns on a 3″ diameter former. Our former is plastic drainpipe, slightly less in diameter. The turns are a bit higgledy-piggledy, but that doesn’t much matter for a lash-up. The small, close-wound coil with the thin wire on the right is the reaction winding. It had been discovered quite early on in the valve era, that if you used ‘controlled feedback’, the signal got a lot louder. Incidentally, several different people invented that, too! The wires sticking up are taps which enable you to change the aerial and reaction connections to see which work best with the aerial you’re using. By contrast, below is another coil I made a week or so ago, also on scrap drainpipe: 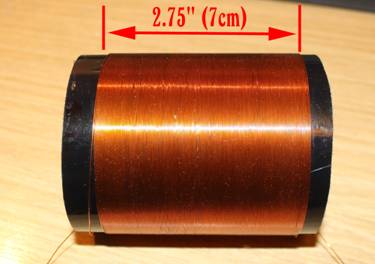 This coil has very many turns, and so is obviously for a lower frequency – i.e. a longer wavelength. It was made for a crystal set to pick up BBC Radio 4, which comes on the long wave from Droitwich – only 17 miles away from here, and a very powerful radio station indeed at 500 Kilowatts. We’ll just dwell on long waves for a bit, because long waves aren’t much used for radio broadcasting these days; and because they are quite old-fashioned, I like them. 8^)

The BBC Droitwich station was commissioned in 1934. Its wavelength was 1500 metres – so its frequency was 200000 cycles per second.

…where c is the velocity of propagation of a wave in metres/second (in this case, the speed of light); f is the frequency and λ the wavelength in metres.

Q.E.D. and all that sort of thing.

For once, I disdain the use of the unit known as the Hertz, on the grounds that, only IMHO of course, (a) the naming of units of measurement for eminent physicists (e.g. Hertz), should not really be applied to quantities which are, intrinsically, self-defining. The term ‘one cycle per second’ is, in itself, a full and accurate description, as are its abbreviations c/s (cycles per second), Kc/s (thousands of cycles per second), Mc/s (millions of cycles per second) & so on. To call one cycle per second ‘one Hertz’ is, to me, to mask a simple, absolute quantity in an arcane (and rather self-interested) fashion. And besides, (b) this is my website, and I can write silly, fatuous things on it if it pleases me. Indeed, I have been doing so for nearly 15 years. 8^)

Anyway, sometimes I would forget the expression c = f . λ. But it was never a problem, because I always knew the frequency and wavelength of Droitwich: and so could always back-derive the essential formula from 200 Kc/s and 1500 metres.

But in 1988, all this was overthrown, because the wavelength of Droitwich was changed! An international directive arrived, and the frequency of Droitwich had to be changed from 200 Kc/s – where it had been for well over half a century – to 198 Kc/s. Admittedly, I doubt if many members of the public noticed. But the beautiful symmetry of 200000 = 300000000 ÷ 1500 had gone for ever. The fact that at least, it still holds true arithmetically is something of a consolation. But I can never remember what the wavelength of Droitwich is any more. Grrh. Ah, well.

To return to the point in hand. Because it is a short-wave receiver, the lash-up shown above has a much smaller coil, as described. The main thing is, it worked. The circuit we were replicating had 2 valves, so we started with just one, and replaced the high-impedance headphones with a choke so that we could get out the audio and record it. We figured out it was tuning around 10 MHz – sorry, Mc/s – and it was just coming up to 1800 GMT when we realised that the station we had tuned in was sending a musical Identity signal. This was recorded, so that we could look it up, but it proved unnecessary, for the broadcast beginning at 1800 was in English, and originated from Romania. Click the audio bar below & you will hear a couple of minutes of it. For the record, it was Radio Romania 2 on 9.64 Mc/s, AM. Notice the characteristic fading, due to signals arriving at our aerial via slightly different paths, so they alternately reinforce, then cancel each other. Naturally, more elaborate receivers compensate for this.

To receive this on a single (80-year-old) valve was, believe or or not, no great achievement. Practically anybody could do it. But it was a great deal of fun, following several hours of tinkering.

You used to be able to hear a two minute audio sample here, but unfortunately, we have lost the mp3. If we find it, it will be reinstated.

This is the place for an obligatory warning. Unlike most modern solid-state devices, valves work on high electrical voltages. These high voltages are dangerous and can be lethal. DO NOT work with this type of equipment unless you are suitably qualified. ACCIDENTALLY COMING INTO CONTACT WITH THESE HIGH VOLTAGES CAN KILL YOU.

We made a series of videos on building a crystal radio set from first principles, ending with a 2-valve loudspeaker set that can even receive (by the skin of its teeth) a foreign medium wave station. WARNING: These videos are not for those with a low boredom threshold!